Welcome to the third recap of the first season of Faking It, a shiny and gorgeous new show from the network that brought you The Battle for Ozzfest and Engaged & Underaged.

We open on a bright, glorious spring day at The Blue Oasis in the Middle of Red Texas High School, where students are lounging on afghan quilts with apples and notebooks and Amy is throwing M’n’Ms at Karma’s head as Karma writes in her notebook. This is similar to what I’d like to do to Karma’s head, except instead of tiny chocolate candies it would be rotten avocados with bombs inside them. 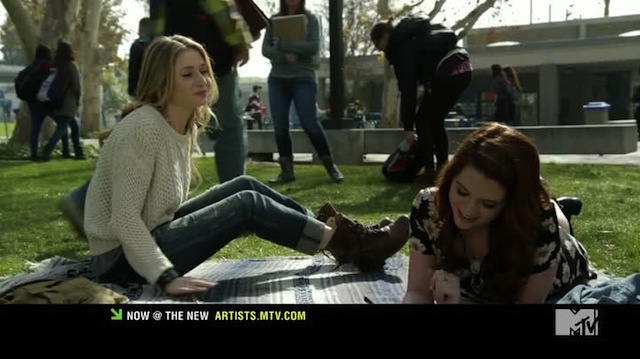 Dear Canada, I am writing in regards to the cancellation of your television program “Bomb Girls.”

So: Karma’s a musician and Amy’s her BIGGEST FAN and Amy wants to see what Karma’s working on! But Karma insists it’s not done.

Amy: “Since when do you share songs with me when they’re ready? You’re JT and I’m Timbaland, we workshop them until it’s dope and then we play them. For your cats.”
Karma: “This one’s different. It’s personal, I’m baring my soul so I want it to be perfect.”
Amy: “Ooo is it a power ballad?”

Karma says nope, thus dashing my dreams of a Meatloafy situation, but promises Amy will be the first to hear her opus when it’s done — and as Karma delivers this news, she crawls suggestively towards Amy and kisses her, like in a real girlfriendy way, and mid-kiss… snaps a photo for instagram. 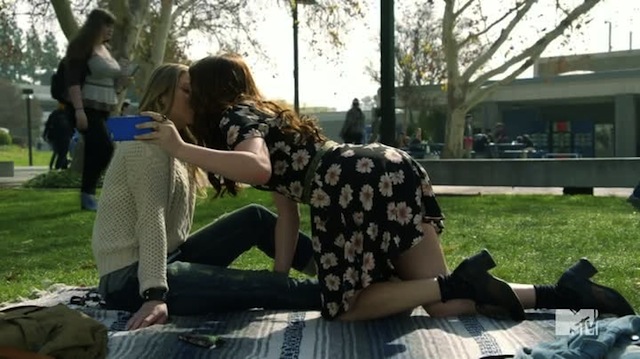 “Since we came out, I’ve gotten over 400 new followers, including a Mister Liam Booker. Everything’s going according to plan,” says Karma. Amy’s like, how is being in a lesbian relationship part of a good plan to seduce a douchebag? Karma explains that ’cause Liam is afraid of commitment, her lesbian relationship status will snag his love while his defenses are down.

Amy: “You don’t get someone to fall in love with you, they fall in love with you because of who you are.”
Karma: “Yeah, well, I’ve been me for 15 years and no one’s falling for me. Except for you!”
Amy: “Very funny.”
Karma: “I’m just having fun, Amy! I’m popular, I have a secret boyfriend, I get to hold my best friend’s hand in public…”

Karma says she’s worried that Amy, lacking a deceptively handsome reptilian smoke monster crabapple loch ness secret boyfriend creature of her own, isn’t getting much out of this arrangement. Amy insists that horrifying her parents is a “gift that keeps on giving,” but then, in an apparent effort to really sell it, adds, “maybe I need a secret boyfriend too.” Jesus LADIES YOU ARE NOT HELPING THE CAUSE. 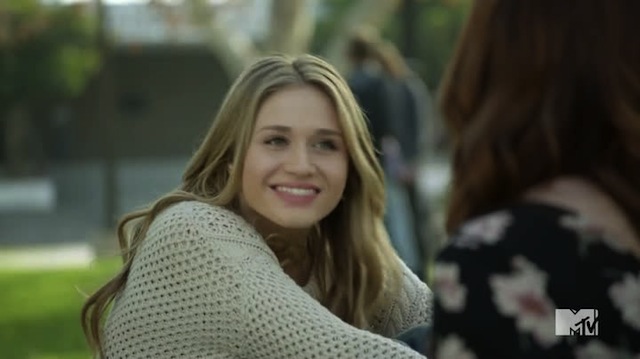 Karma suggests this guy Josh Hoyt, who Amy was apparently obsessed with in middle school, which is a time in the male lifecycle when he either resembles an actual swamp monster OR a tomboy lesbian. What luck — Josh is coming their way right this minute, dressed up like a Newsie, ready to really DAMN THE MAN.

Amy: “Not another fucking protest.” 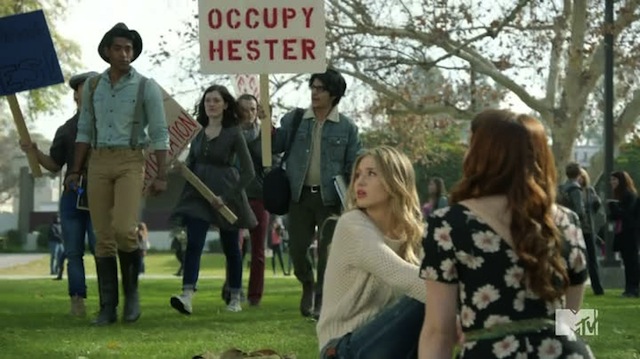 Amy and Karma dash inside to discover an assemblage of young idealists chanting “HEY HEY HO HO BIG BROTHER HAS GOT TO GO.” What’s the cause of this protest? Liam explains: Sporkle (heretofore referred to as “Fake Google”) wants to donate $6 million dollars to Hester High! “Wow, sounds awful,” Amy says, echoing my own thoughts and feelings. 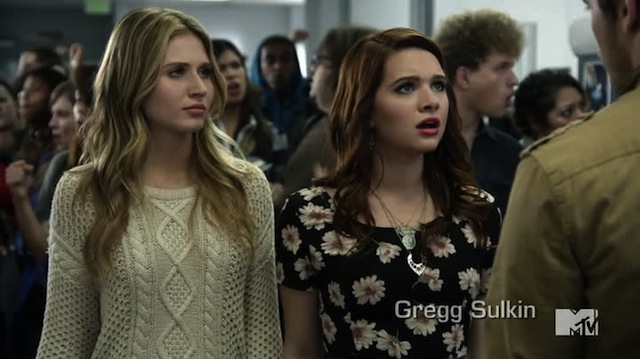 No, this is as far as my mouth opens. Gimme a junior mint now, buster

Principle Penelope Deliah Fisher explains that although, as a Berkeley graduate, she’s SUPER INTO protests as a rule, perhaps the children should care that her budget’s been slashed into tiny pieces by the government and Fake Google is their only hope for survival. The Fake Google Rep explains all students will receive a Fake Google Smartphone and Tablets! HOW AWFUL.

Liam: “What do you get out of this?”
Fake Google Girl: “The satisfaction of helping a school in desperate need of money. Also Sporkle will own all data collected on these devices.” 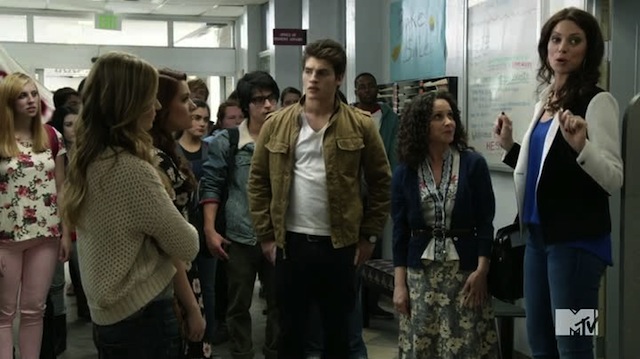 Karma seizes the opportunity to leap onto the nearest surface to scream loudly about privacy and becoming “digital slaves.” Hey Karma you could just sell the tablet on The Bay, it’s not like you have to throw out your old phone. Anyhow, Liam commands them to take their battle stations and “Occupy Hester,” which um, isn’t really how Occupy works? But who cares! It’s The Blue Oasis! It’s like The Hotel California, except that you have to stay checked in forever and wear knickers. 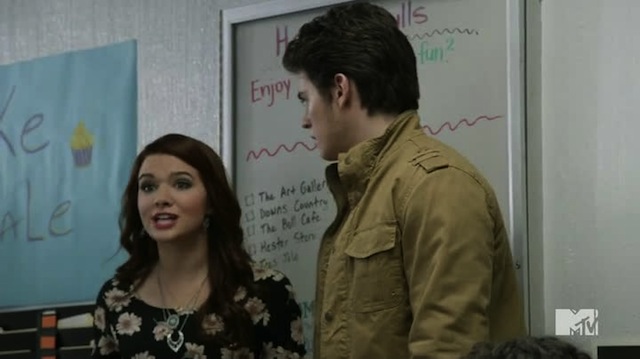 Pulitzer and Hearst , they think we’re nothin’! ARE WE NOTHIN’? 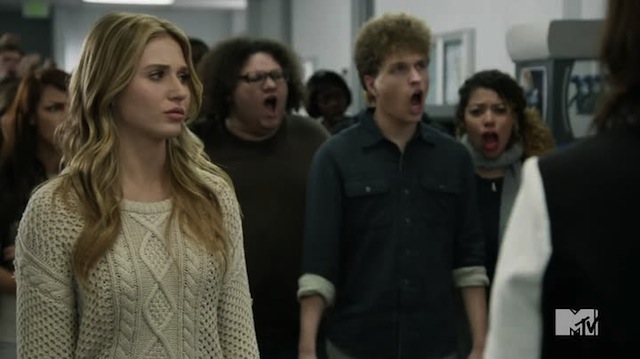 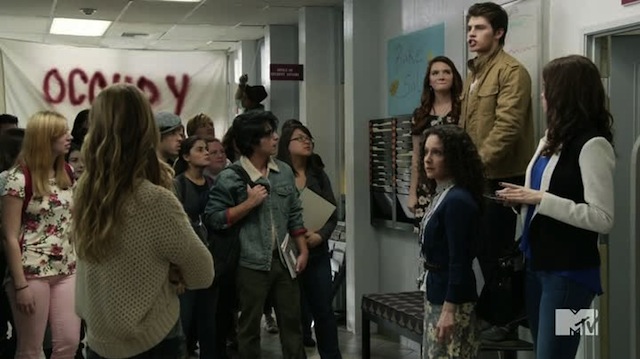 Amy’s so over it she needs a new word for “over,” and is also confused about Karma’s sudden transformation into Norma Rae, but Karma explains that since Liam gets a hard-on for politics, obvs she’s gonna be the “protestiest protestor who ever protested.” Besides, Karma cajoles, this political uprising would be a great opportunity for Amy to get intimate with Josh, aka the Joshiest Josher who Ever Joshed. Amy picks up a bullhorn and says, “Down with corporate tyranny!” and Josh gives her an affectionate eye. Hey Hey. Ho Ho. Please no. 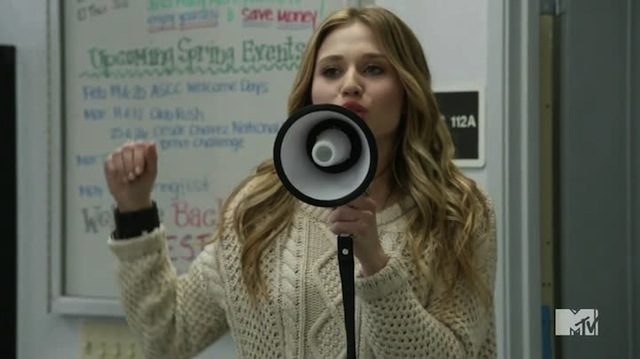 Is anybody interested in a discounted subscription to USA Today?

Over in the cafeteria, Lauren & The Ls are lamenting the ludicrousness of this week’s political cause as Karma delivers art supplies to Liam for “sign-making,” because why anything. 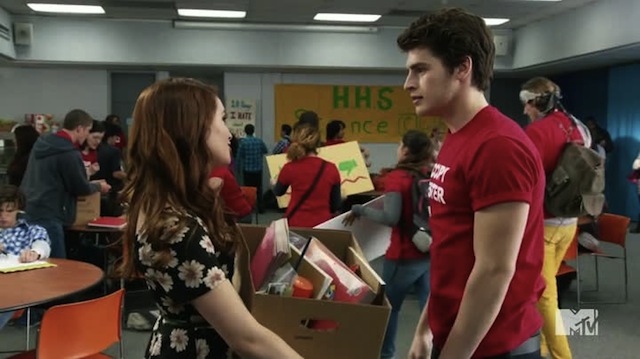 You stole all of those knives just for me? 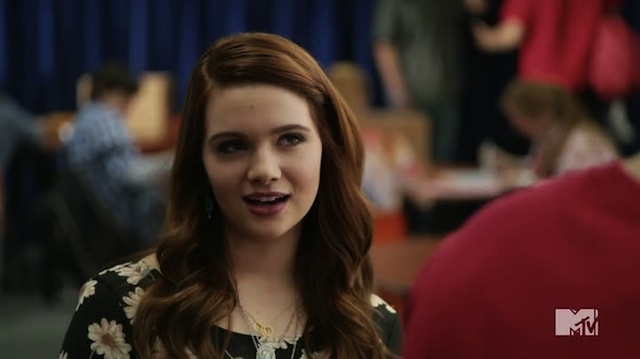 All the better for the internet to stab you in the eyeball with, my pretty

Liam tells Karma he liked her “fire” back there and thinks she’s a natural leader. Also, he’s got a special too-tiny t-shirt for her in his buttcrack! But before this romance can get even romancier, Shane shows up with Liam’s protest buddy Soleil, who has permanent sex-face and is super cool you guys. She’s actually too cool for school — when Karma wonders aloud why she’s never seen Soleil on campus, Soleil explains that most of her courses are independent studies for the “various community outreach programs” she’s involved in. “I’m a lesbian!” Karma offers. Mhm. Haven’t seen you volunteering for The Trevor Project, LIAR 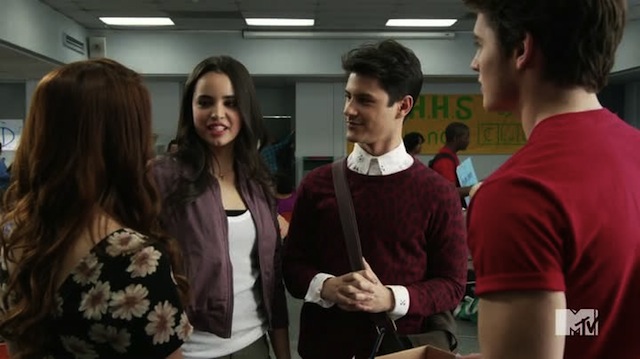 The two political forces venture off to start a revolution in their beds as Karma and Shane look on:

Shane: “And the promance continues.”
Karma: “Promance?”
Shane: “Protest romance. Every time we shut the school down the sexual tension just builds like Mount Vesuvius until finally — eruption.” [pause.] “Eruption equals sex.”
Karma: “Yeah, I got that.”

Outside on the grassy knoll, Joshy Josh and his band of merry men & womyn are dancing to a small old-timey hand-held instrument as Amy reconsiders her plan to speak to this human. 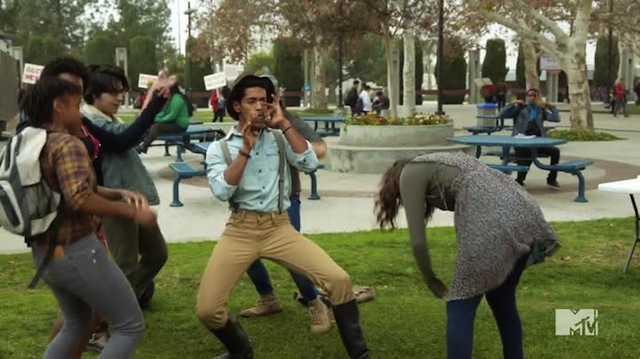 Luckily, a dude named Oliver shows up with a bunch of toilet paper and a heart full of hatred and cynicism. HUZZAH!

Oliver: “Figured you’d be more into this kind of thing, being Homecoming Queen and all.”
Amy: “No, this is more my girlfriend’s kind of thing. She gets involved in school activities, I stand back and silently hate them.” 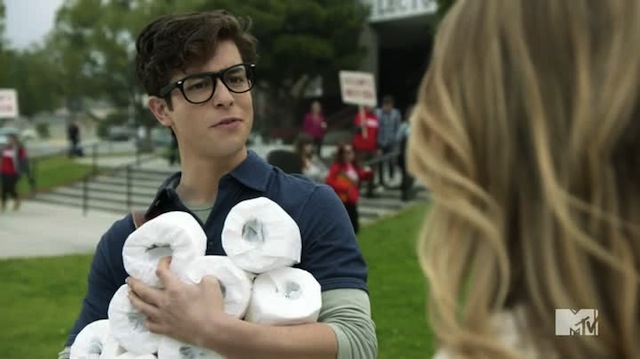 Ahhh, you’re a 2-ply girl. I can appreciate that.

Hark! Karma’s chaining herself to a door because that’s her plan to stop Soleil’s sex volcano from erupting. Amy says she just met a boy named Oliver and she “doesn’t wanna poke his eyes out with scissors,” which both girls agree is totally huge and makes him potential secret boyfriend material. 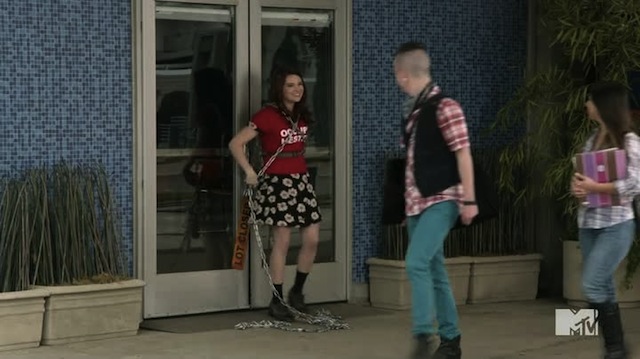 Hark! Liam needs Karma to unchain herself from the door so Soleil can wheel in her boxes of warm moist vegan muffins. So Karma picks up the bullhorn and declares a hunger strike. Oliver and Amy peace out. 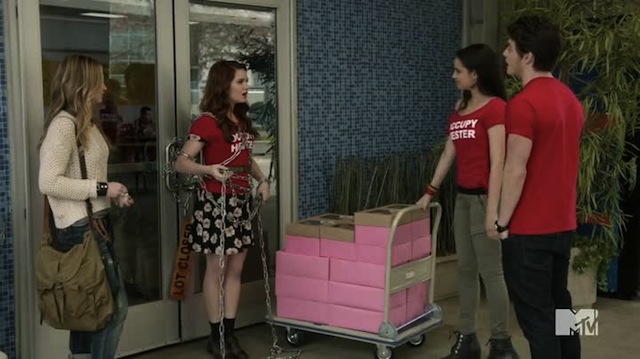 So, this is awkward but I’d actually asked for my lifetime supply of pink bondage rope to be shipped to my house?

Principal Penelope Deliah Fisher makes her way through the crowd of naive protesters, begging them to “please think about what we could do with this money! Electric schoolbusses, an organic farm to table cafeteria, we could recycle our waste into clean drinking water!” but obviously these kids are not concerned with trivial things like REALITY. They are young lezzie-loving idealists swimming in the sweet Blue Oasis of their tender blood and tears! 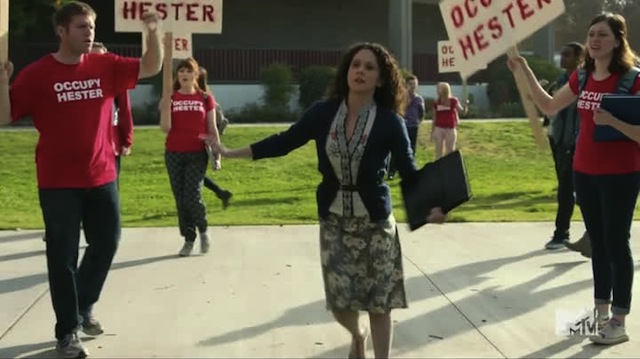 Liam tells Karma that her hunger strike idea was brill, ’cause it got him and his fellow idiots a TON of press, and now he wants to kiss her right on the mouth! But before he can, Shane and Soleil show up with bad news: low blood sugar is taking its toll on the kids and they’re breaking into the vending machines. 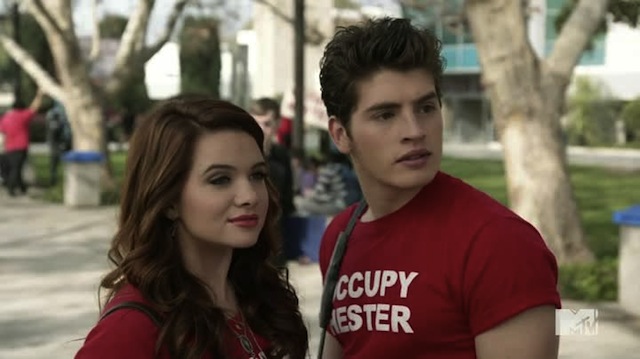 But have they gotten desperate enough to eat the Lifesavers that have been sitting there since 1979? That’s the question.

HOW WILL THEY KEEP SPIRITS HIGH?

WITH AN OPEN MIKE!

Then Oliver brings Amy to his secret lair where he can access the feed from every security camera in the school! It’s like this show is deliberately making it impossible for me to go an entire recap without a Pretty Little Liars reference. 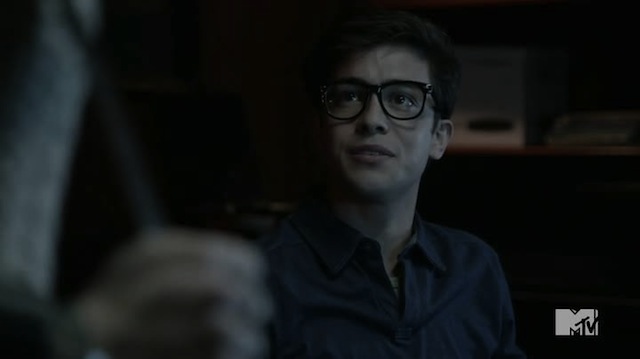 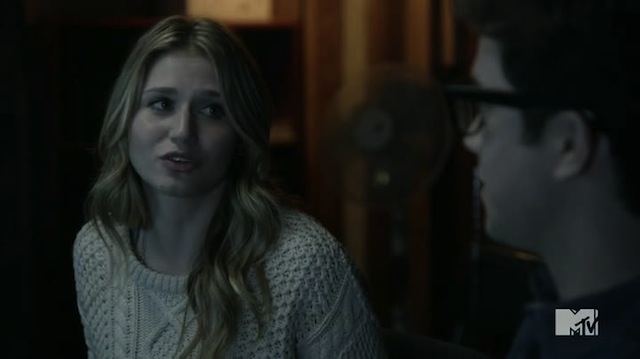 Well for the record I don’t even own a red coat, so

Amy: “You do realize the irony of spying on students protesting the invasion of student privacy, right?”
Oliver: “I do! I’m glad you do too. I’d like to think of this as anthropological research. I watch students in their national habitat because I don’t understand them even though I’m supposed to be one. I’m weird. I shouldn’t have brought you here.”
Amy: “No, it’s cool. I can relate.”

You guys, I also don’t want to stick scissors in Oliver’s eyes! Ugh, he’s such a male lesbian. Why is this show determined to trot out every trope I normally hate and make it so hard to hate.