What Everyone Else Thinks:

As of yesterday, Facebook has added “Civil Union” and “Domestic Partnership” as relationship status options for your profile. GLAAD is enthusiastic about the change:

“The Gay & Lesbian Alliance Against Defamation (GLAAD), the nation’s lesbian, gay, bisexual and transgender (LGBT) media advocacy and anti-defamation organization, today applauded Facebook for adding ‘In a Civil Union’ and ‘In a Domestic Partnership’ options to user profiles. The option is now available for users in the U.S., Canada, the United Kingdom, France and Australia.”

“Today, Facebook sent a clear message in support of gay and lesbian couples to users across the globe. By acknowledging the relationships of countless loving and committed same-sex couples in the U.S. and abroad, Facebook has set a new standard of inclusion for social media. As public support for marriage equality continues to grow, we will continue to work for the day when all couples have the opportunity to marry and have their relationship recognized by their community, both online and off.”

Actually, anybody who’s anybody is really enthusiastic about the change!

“I am glad that this news story is a reminder of the inequality LGBT folks face world-wide and how one’s geographic location can influence their ability to engage with social media.”

“As LGBT people face a patchwork of relationship recognition laws, this gives people more tools to adequately describe their relationship. Facebook has been a company that has tried to be inclusive of the LGBT community and this just one sign of it.”

“Being tacky about your personal life online is now an equal-opportunity endeavor.”

Despite all of this… I’m not exactly jumping for joy at this news. When I hear the words “Civil Union” or “Domestic Partnership,” I think “inequality” and “separate but equal” (which as we know is not equal at all). 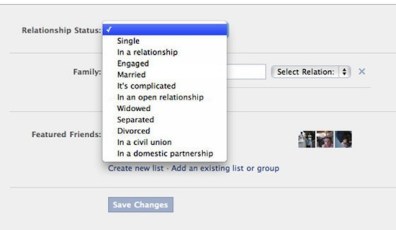 I understand that “Civil Union” and “Domestic Partnership” are current states of certain relationships right now – I know this is how some people identify their status. But would it be if (god forbid) the word “marriage” were legal for us? To me, “Civil Union” means “something someone created so they could continue to deny our commitments and our rights, which other people in other commitments are granted.”

MARRIAGE. That’s the word I want. Nothing else. I won’t settle for less than equal.
So I feel weird about encouraging inequalities like “Civil Unions.” I mean, right? I want to have the same words as straight people because we’re all the same and that’s what the gay marriage fight is about, so why are we celebrating this?

I don’t mean to diminish Facebook’s good deed. I think I’m just saying that GLAAD should know better… or something. I don’t know, these are just my feelings about it. I’d rather “Civil Union” and “Domestic Partnership” not be options on Facebook’s relationship status because gay men and women should be able to select “Engaged” and fucking “Married” like everyone else.