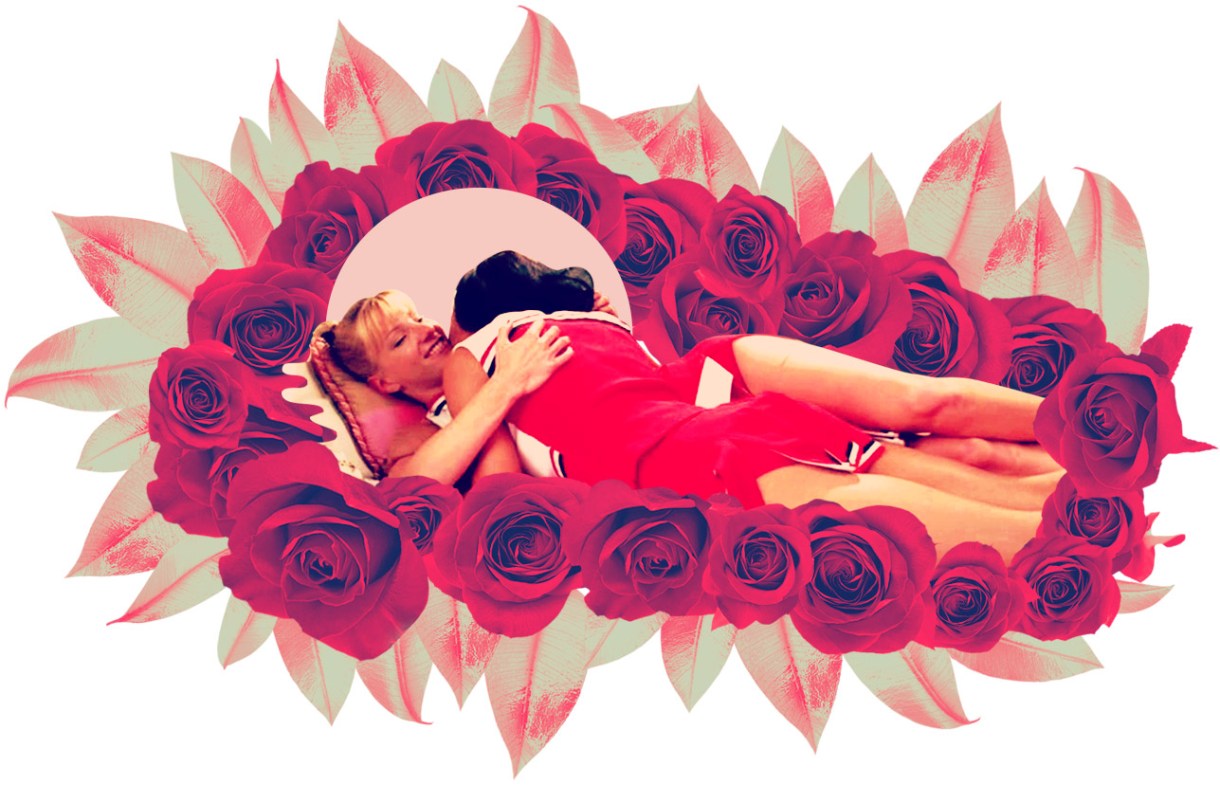 Season two of Glee wasn’t supposed to air in India until later that summer, but I’d somehow found a website that had informed me, in no uncertain terms, that Santana and Brittany were going to make out.

As in, kissing on a bed.

My mother, tired after a long day of listening to children misspell words and marking huge red circles over their incorrect fractions, would power-walk on the streets in front of our house for about an hour. She waited until after she had kneaded the dough to make roti, called out my name twice to tell me to light the lamp in front of the Lord Ganesh idol that stood in the center of a woodwork palace that had been set up (“In the east, because that’s an auspicious direction,” my mother had told me once, and I’d just nodded, unable to comprehend the puzzling mystery of the placement of this representation in one specific direction when God was, supposedly, everywhere), and pulled on her scarf from where it had been hanging on the door.

“I’m going to take a walk outside, okay?” she’d say, and my brother and I would make an effort to nod as casually as possible, even if our insides were jumping with the anticipation of a few minutes of freedom from studying. Then, as she would walk out the door, I would wait for exactly one minute and thirty seconds before jumping up and running to lock it.

My brother would wander toward the TV to watch some movie, and I’d go straight for the computer and open two tabs. In one, YouTube. In the other, fanfiction.net, where I tweaked the character filters so I could read about Santana and Brittany falling in love for the thousandth time.

I was still going through the phase of “Hey, girls are hot and I can want to make out with them, but it’s okay because it’ll only be for a little while and then I can find a guy I want to settle down with.” But after reading about how Brittany and Santana made out (for real), I pulled up the video of their scene in “Duets” to watch and rewatch it, pausing ionly while my brother wandered into the room to mask it with another tab which was paused on some random video of Finn and Rachel kissing.

“He’s cute,” I’d lie to him, when he asked about it, and he’d just shake his head in a what-even-are-girls way.

It was my guilty pleasure, scouring the internet for videos and articles on queer content in movies and on television, and while watching most of it resulted in me hiding my face with my hands because I couldn’t stop blushing, it was still the most exciting period of my life. I had just discovered a whole new world, and it kept me up at night. I’d go over countless scenarios of some nameless, faceless girl in bed with me, holding me close and kissing my cheek. Maybe that was the Indian in me, the Indian that had been brought up in a household where sex was a taboo topic, but I only fantasized about cuddling, not sex. I would imagine there was someone holding my hand, someone whose hand was soft and who smelled like flowers. I would imagine elaborate long love stories — and end them with me finally marrying some boy.

There was no way I could do all of this sneaking around with the computer and not get caught, and I did. More than once. In different ways, watching and resulting in varying expressions of shame and remorse on my face. Sometimes the computer wouldn’t have shut down properly, other times I would have forgotten to wipe the history. My mother wasn’t tech-savvy enough to check the history, but my dad was, and it always scared the wits out of me to think he would make sense of the websites I used to visit. In my head, though, it was never a real possibility that they could actually figure it out.

I suppose it was due to my family’s extreme Indianness, that compulsive need to stick to everything traditional and conventional. I thought that they would explain away any strange behavior as puberty. I tried to stop, but I was like an addict. I couldn’t keep herself away from this world I had discovered behind the screen. I just got better at wiping the history, using the incognito tab and timing my browsing better. And yet, two out of every five times, I’d get caught again and the resentment, the shame and the self-loathing would begin. I’d promise to never do it again, brush off questions like “What do you even do on the computer this much?”, stay quiet, and quietly wait for the next time my parents would leave me alone so I could feel free.

I was 14 when I thought I was actually going to be outed, that the secret I’d been so desperately trying to hide would finally come to light. My father came back unexpectedly, knocked on the door, and I had to scramble to shut the computer down, and reach the door. I was pretty satisfied with myself, and apart from the cardio I’d put my body through, mostly relaxed and smug. Right until the moment my father started the device, opened the browser, and asked me why I’d been on the computer again while I was supposed to be studying, in the most strictly neutral tone of voice possible.

Turns out I had forgotten to close the browser before shutting the computer down.

I had to sit through my dad looking over the very-smutty fanfiction I had been devouring, my heart pounding away in my chest, the palm of my right hand clenched into a fist so tight it was like I was preparing my body to run away at the slightest sign of him catching on to the identity crisis I was going through. My other hand was frantically tapping away at my thigh, as my mother wandered in to give me disappointed looks. I remember in startling detail her standing near the door, looking at me as I sat there with my head bowed. I am sure she didn’t know what exactly I had been doing, or care. She was more worried about the fact that I wasn’t studying, that I had exams coming up soon. She also trusted me to not do anything wrong, which felt even worse.

This is it, I thought to myself. This is the moment my dad stands up from his chair, the moment he starts screaming at me about depravity and traditions and values and God, and how “This isn’t how things are done in India.” When he kicks me out of his house, and I lose everything I’ve ever had.

Then he closed the browser, and slowly turned to look at me. Looked at me for the longest time, and started talking about how it was important that I study and not distract myself with trivial things like the computer. I don’t know if he understood what I’d been reading or had dismissed it, don’t know if he had an inkling of the fact that his daughter was maybe attracted to girls. I still don’t know if he knows she definitely is.

What I do know is he didn’t share anything about that incident with my mother. My father is, out of both my parents, the more open-minded one. If my mother had knew about and understood content I was reading at that time, there would have been huge drama. Since that incident passed relatively drama-free, I have to assume that my dad stayed quiet and protected me.

That moment is still something I consider an important part of my life, a vital slice of my sexuality. It must have looked like a scene from a TV series: me hunched over my notebook, trying to hide my relief because I was only being chastised for not studying and not for something I couldn’t really comprehend myself, something I couldn’t stop feeling. My father regarding me with an inscrutable expression on his face. When the tension became unbearable, I escaped to my room, where I leaned against the wall, trying to slow my heartbeat and still my breath.

Through it all was the strongest feeling of equal parts love and fear toward my father. My head was a muddled mess of could-haves and would-haves, and I felt suddenly inexplicably tired. Tired of having to hide, of having to cover up my tracks like a criminal. I had always been a model child, but this was making me break every rule without concern for the consequences. How was I supposed to care about trigonometry when I was, every minute of the day, going over every interaction I’d had with a female friend? How was I supposed to study when the internet was at my disposal? The internet which could tell me stories of women marrying other women, of women falling in love with other women, of happy endings?

I didn’t stop rebelling. I certainly got better at hiding my activities though: clearing out the history, taking extra care to shut off everything properly before I’d let my parents in; and after a point, they stopped scolding me. I eventually grew out of the denial and accepted the fact that I was bisexual, that I might end up marrying a woman. It didn’t hit me as hard as it does with some people; it was more like I gradually grew comfortable with the idea of holding a woman’s hand for the rest of my life.

I like to think that, if I ever muster up the courage to tell my parents I’m queer, I’ll remind them of that day. Remind my dad of the time he opened a browser and found fan fiction that was definitely not age- or tradition-appropriate. There’s a tiny part of me that thinks that he’s just going to smile, and say, “That’s how long I’ve known.”

Ria is a writer at heart, and an unwilling almost-engineer. When not listening to Green Day, she can be found writing, playing the ukulele or crying over codes

Ria has written 1 article for us.