The year after I studied abroad I used it every day like a meditative practice. It didn’t improve my fluency but it helped me maintain where I was at as I hoped to someday get back to France. Then I missed a day and – after weighing the likelihood of upcoming international travel – I didn’t open the app for five years.

When I decided to start using Duolingo again last month it wasn’t because I thought I’d be going to a French-speaking country anytime soon. It was literally just to displace my impulse to check Twitter during a stressful election. I was trading the blue bird app for the green bird app.

The most delightful change to the language learning tool in my absence was the addition of a section called Duolingo Stories. These simple narratives that gradually introduce new vocab remind me of the Bob Books I read in pre-school. This way of learning a language makes way more sense to me than the sometimes very random sentences in the main part of the app.

That’s right. Story #6 titled “Honeymoon” is very gay. Not with a Disney-style exclusively gay moment, but with some actual textual Le mot L dyke drama. (According to IMDb it was just called L Word in France but let me have this.)

The story begins with Sophie dans un taxi and the cab driver is like bonjour or whatever and she’s like take me to the airport, s’il vous plait. Not reading her vibe the driver is all chatty and asks if she’s traveling for work. Now if you’re a new French speaker this might be difficult because travail means work, not travel, but I am not a new French speaker so I was just like cab driver her tone did not imply the desire for conversation please stop talking.

ANYWAY. Sophie is in a state and so she’s like, fine you want to talk let’s talk. I have a ticket to Toulouse – I have DEUX billets pour Toulouse. The cab driver still not reading her tone is like I love Toulouse and Sophie doesn’t skip a beat to say that actually she’s on her honeymoon!

The cab driver is nosy AND heteronormative so he asks where her husband is. Sophie is like actually MA FEMME and also that’s not even the issue here because my gay wife isn’t coming with me! Finally, Sophie admits this has not been a good day!!

The cab driver apologizes and it’s like yeah dude this is why you need to learn to read tone!

They arrive at the airport and at this point I’m on the edge of my seat. What happened with Sophie’s wife?? Why is Sophie still going on her honeymoon??

We do not learn the answers to these questions BUT Sophie’s wife Marie is at the airport. She says she’s désolée. She’s says je t’aime. Sophie says je t’aime aussi. And then they’re off to Toulouse!

I’m so glad these two worked things out. I’m sure they’re going to have a great marriage. 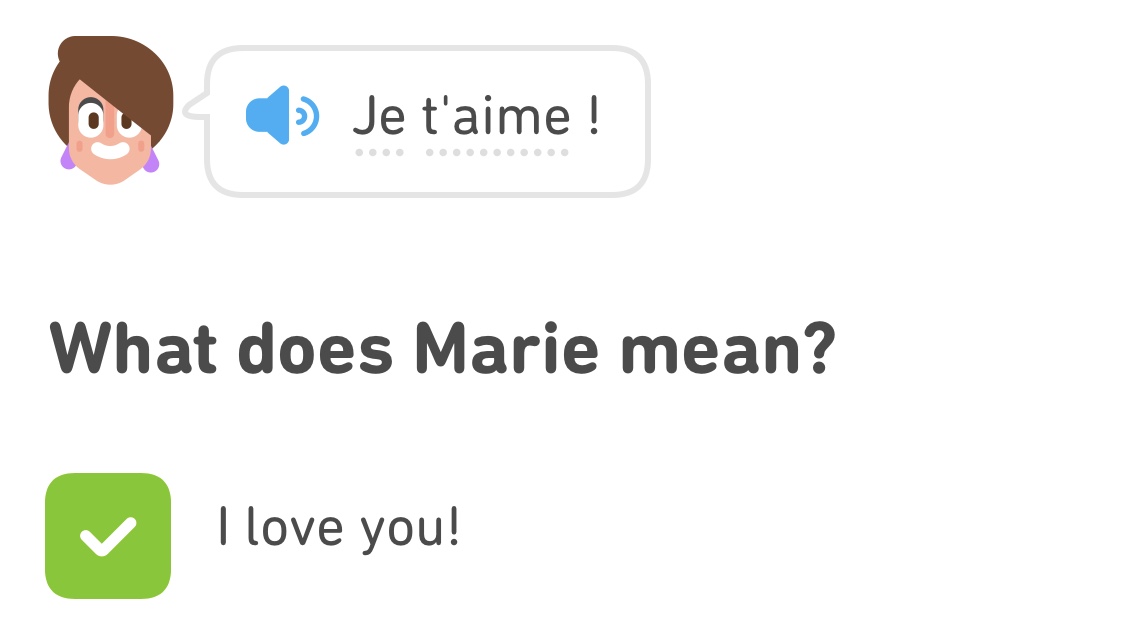 I’ve finished the first three sets of ten stories and so far this is the only one that’s explicitly gay. But there are SEVENTEEN sets and I see no reason why there can’t be more of this much needed representation. Here are some of the titles I’ve yet to unlock and what I’m hoping they’re about.

“It’s My Ex!” – The options with this one are endless. My guess is une jeune femme and another jeune femme have just started dating and things are going great. But then they start talking about their most recent exes and UH OH it’s the same person!

“The New Teacher” – This one must be a coming-of-age story about a little baby lesbienne who falls hard for her professeure. She’s so distracted by her teacher crush she doesn’t realize her best friend is in love with her!

“A Very Bad Movie” – I’m imagining a couple of dykes go see the latest buzzed about gay movie only to be disappointed that it’s just two femme femmes having male gaze make outs and then one of them dies.

“Long-Distance Relationship” – I’m thinking a classic love story between a queer in the US and a queer in France who meet on Instagram and it ends with them deciding to move in even though they’ve only been together in person once. It was a magical week! Ne juge pas !

If I needed an excuse not to check Twitter during the election, I certainly need it during a global pandemic. Maybe you do too. And if along the way we improve our language skills? Well, that’s great! And if the stories are gay?? Encore mieux !

Drew has written 227 articles for us.