When it comes to my search for quality webcomics, it seems like I’m never satisfied. But when I stumbled upon Taylor Robin’s wonderful webcomic Never Satisfied, my hunger was satisfied, at least for now. This comic combines a bunch of things that I love, cute animals, cute queer characters, magic, beautiful art and a great setting. If you like even just one of those things, read on and see if this comic is for you (it almost definitely is).

Never Satisfied is a comic about a group of teenage magicians who are all trying to pass enough tests to become the official magician representative for their (very beautiful) city and work with the king. The focus of the comic is on one of these teenage magicians, Lucy, who is the apprentice to a grumpy old guy (these teens seem to be apprenticed to various people throughout the city) and is a little rough around the edges, both as a potential magician representative and as a potential friend to the others. They’re pretty standoffish, and put out an “I’m cooler than you” attitude, but when they’re alone, they reveal that they act that way in order to mask insecurities.

While the comic mainly focuses on one of these apprentices, several of them have had enough screen time so far to really shine. This is especially true of Ana and Philomena, as well as the non-apprentice characters Tobi and Ivy. Ivy is Lucy’s familiar and talking cat friend, so she’s on the page quite a bit, acting as a more upbeat foil for the somewhat dour Lucy. Tobi is the sort of the older brother to the street kids that follow Lucy around whenever they visit the market. Both of them are great characters. 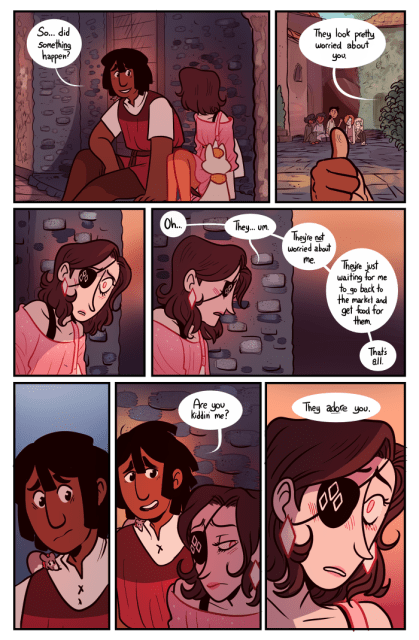 This comic has no shortage of lgbtq characters. The main character, Lucy, is non-binary and uses they/them pronouns, as does another one of the apprentices, Tetsu; we know that Ana, a female apprentice and maybe my favorite character, is gay. And the character designs are so great! There are so many ethnicities and body types represented! It’s so great! And I really love how Robin does all of this while keeping a distinctive style that’s cute, fun and animated. These characters are drawn with a ton of style. Robin marks them off with their own color schemes and unique shapes that make them all very much stand out from each other, honestly, the colors alone make the art beautiful to look at. There are also lots of cameos of characters from other great webcomics, so it’s fun to notice some of your favorites from around the internet hanging out together.

The world that Robin’s created becomes even better because she’s a genius when it comes to drawing backgrounds and creating gorgeous settings. The city that she’s drawn up for her characters to inhabit is just stunning, and it’s brilliant in it’s design. From the colossal pair of statues that overlook the entire city to the beautiful square with its fountain to the marketplace with its hidden orphans, we’ve only been to a few locations in this world and already it feels big and full of wonders. 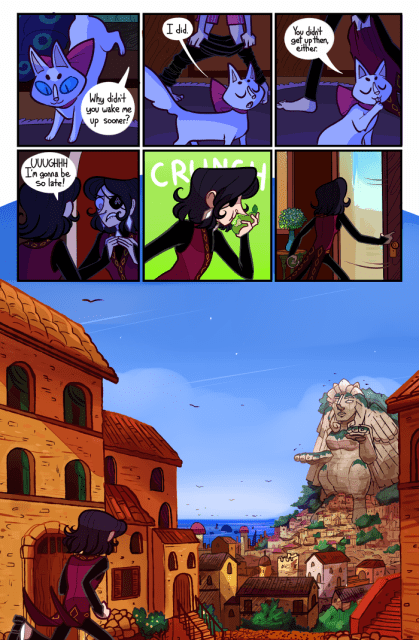 With it’s great, diverse characters and gorgeous setting, it’s easy to fall in love with Never Satisfied. Robin has found a really genius combination of ingredients that combine to form a webcomic that I love, and that I’m sure many of you will as well. You can follow Robin on twitter and on tumblr, where you can also commission her to do illustrations. Chapter Three just started yesterday (I’m eagerly anticipating itas I write this), and it updates twice a week, so go check out Never Satisfied and start enjoying it as much as I have been.