One of the comics that I’ve been reading for the longest time that haven’t covered here (for some reason) is also one of my favorites. I’ve actually written about the comic’s creator and this comic before. In Gigi D.G.’s Cucumber Quest beautiful art, even more beautiful colors, perfect character and world design, epic RPG-style storytelling, fun and quick-paced humor and a delightful story focused on character growth and relations come together to make what’s probably the best all-ages webcomic around.

It’s an epic tale of a young rabbit boy named Cucumber who wants to learn to be a wizard, but is forced to become the chosen one and save his entire world when the terrifying Nightmare Knight comes back to be evil. Cucumber’s lucky though, because he has a sister named Almond who’s great with a sword and even better with courage. Later some more people (or, rather, rabbits) join their gang, namely Sir Carrot and trying-to-be-brave knight Princess Nautilus, probably the smartest and cheeriest member of the team. They travel through different kingdoms of the realm, defeating different masters (Noisemaster and Chaosmaster, for example) making their way to the ultimate boss battle against the Nightmare Knight. But along the way Queen Cordelia and her star minion Peridot are trying to stop them and unleash the Nightmare Knight’s true power. 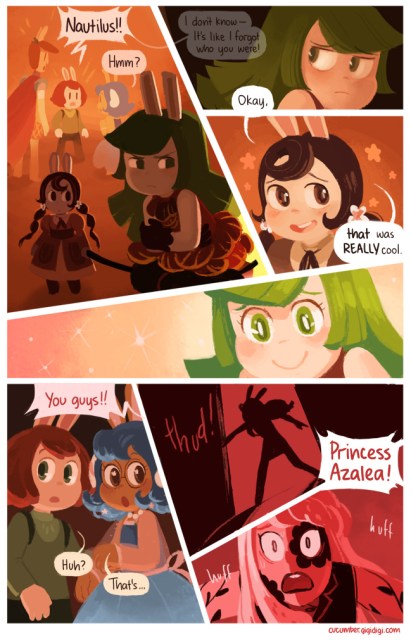 Obviously, my two favorite characters are Peridot and Almond, with a huge emphasis on Peridot. I mean, Peridot is a cute, bratty and cocky witch, so she’s basically me, but a little kid and a rabbit and green. The two of them together is also a huge part of what make this comic great for queer kids to read. These two represent my very very very favorite trope of all time, the arch-enemies-falling-in-love trope. And they’re so cute when they do it! A lot of the time critics of queer media, especially when the media is aimed at younger people, say that it’s inappropriate because kids shouldn’t be seeing sex in their media. Cucumber Quest is the perfect answer to that. Here are two kids, who are clearly in love, who flirt and get nervous around each other and are super cute, and they completely act like kids. I can’t wait to see more of them each time this comic updates. 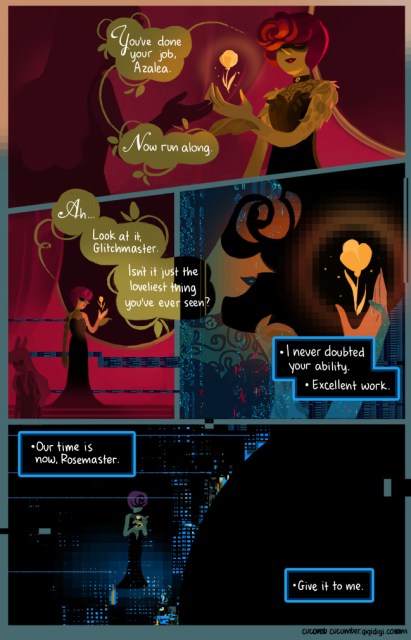 I also want to give a special shoutout to this comic for the great way it treats trans readers, especially young ones. One of the villains (and in this comic, all the villains are very humanized and lovable), Rosemaster, is a trans woman, and she’s terrific. I already included her in my list of the best trans comic characters of all time, and I stand by that decision. In the most recent storyline, we see the male hero of the comic, Cucumber, transform into the costume of the magical girl TV-show star Punisher Pumice, complete with a skirt. In a scene that’s similar to a Steven Universe episode from last year and Kate Leth’s Power Up comic, Cucumber doesn’t feel embarrassed or ashamed at all, and it isn’t made into a joke. Instead, he actually becomes more capable and powerful when he’s wearing this magical girl costume. If I had seen that as a young, confused kid, I would have felt so much better about myself. I love all the characters in this comic so much. 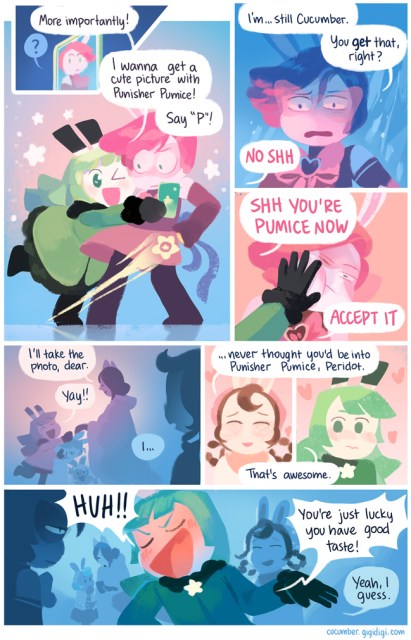 Obviously, the characters and the way they’re written could easily be listed as the best thing in the comic, but gosh, the art is just amazing too! D.G. has a way with color and shading and shapes that just makes everything seem so much more magical. It doesn’t seem like you’re looking at drawings; it seems like you’re looking into a fully realized world. Hands down, Cucumber Quest is one of the best comics around, and it has been for years. You should definitely read this comic, and follow both it and it’s creator on Twitter. You should also support the comic and buy books from D.G.’s webstore.

Batgirl a Celebration of 50 Years HC

Odyssey of the Amazons #2