Dating Download is a new ongoing series where Shelli, Dani and Drew try out the latest or most overlooked of dating apps so you don’t have to. Today they’re giving you the full download on TAIMI.

TAIMI is the next app up in Dating Download. Launched two years ago as a dating app exclusively for gay men, it’s been rebranded and now claims itself to be “The worlds’ largest and most inclusive LGBTQ+ platform featuring a social network and a dating service”. The app allows you to create an entire social media style profile so you can do things other than swipe and match with potential dates. After you set up your profile you can create stories, post updates to your feed and you can even go live if you want to get into some real-time flirting. 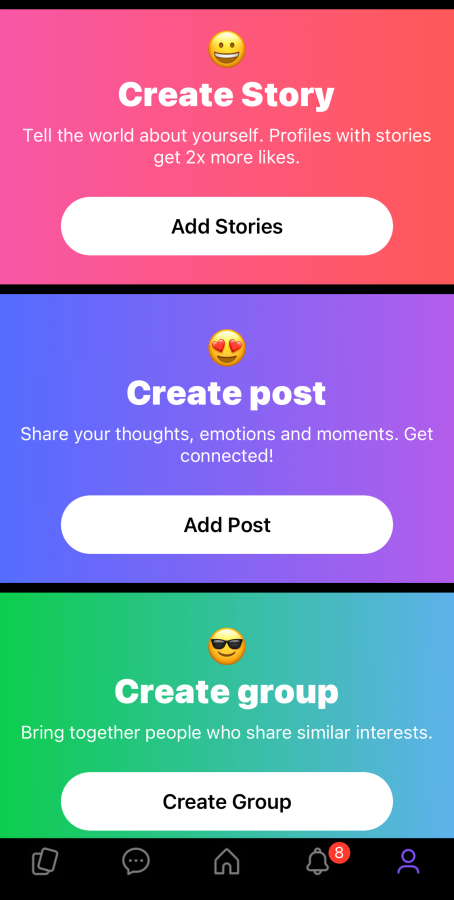 I do love to create…

TAIMI is a whole ass social media network. After I filled out my profile it was asking me If I wanted to post a story or go live like I was on Instagram. I kind of just wanted to get to swiping but instead it sort of kept encouraging me to fill out more information on my profile. When I am filling out my bio I like to keep it to 3 lines and then drop my Instagram, It’s kind of cheating as it’s usually what I do to get around having a premium membership, but I’ve stopped doing that recently because I’m just easing up on the digital access I allow people to have to me.

I started to put up my pictures of course and then something happened, IT REJECTED LIKE 5 OF MY PICTURES! I wasn’t showing too much titty in them but I guess it wasn’t feeling my art school style selfies. After that I started playing around on the app, swiping, reading posts and my favorite part — watching people go live.

When people go live on Instagram, a lot of the time they just want attention. Before all the brands started curating an IG live schedule due to COVID, when I saw people go live they were just putting on make-up and acting like they didn’t like the compliments. on TAIMI folks were not just accepting them but thriving on them and even making cute connections. I spent A LOT of time popping in and out lives, it was like if Love Connection, OnlyFans, and TikTok had a baby and I was the babysitter who sat for free because I loved them so much.

The number of black people on this app was also pretty amazing. When I was swiping I mostly saw POC people and very rarely got any cis men in my stack — Praise Be! TAIMI has groups that you can join that meet specific interest which I think is dope because it’s a way to zero in on people who are into exactly what you are looking for, it could mean less time on the app and more time enjoying people off of it.

Right away Taimi made me choose between “female” and “transgender female” to be displayed prominently on my profile. As I said in our last review, I generally don’t like to include my gender on my profile, and I am female and transgender female. When will dating apps learn the word cis?? Supposedly there’s an option to not include any gender but selecting it doesn’t work as evidenced by my profile preview and that every profile I’ve seen has had it displayed. I’m not trying to get hung up on this, but it did sort of influence my entire enthusiasm for the app.

But here’s the trade-off: there are so many trans women on this app! Maybe having transgender female as a separate gender option makes them more heavily suggest trans women than an app like Tinder? It feels complicated for me that the trade-off is knowing plenty of people are actively de-selecting trans women in their settings. Good riddance, I suppose. But it feels weird for an app to openly condone bigotry in that way.

Anyway, it’s great how many trans women there are and that’s really the only thing keeping the app on my phone. I can’t see myself ever maintaining a full social media profile like the app requires for its full use. I already have Twitter and Instagram! I guess there’s something to be said about the app explicitly being for dating, but this slight removal of ambiguity doesn’t justify a whole separate social media account to worry about. Also, personally, maybe this is bad, but if I slide into someone’s DMs on Twitter or Instagram I’m not even doing so necessarily with the intent on dating them. Maybe! But mostly it means I want to get to know them better. What that turns into will depend on our interactions. And if I were to invest time into Taimi I still think that’s how I’d feel! If I don’t know you, I have no way of knowing if I want to date you or befriend you or never talk to you again.

Some practical things. I don’t like that you have to expand to see the entirety of someone’s picture. It’s nice that it doesn’t force you to crop, but this results in the appearance of a weird crop if you’re just quickly navigating. I also don’t like that it notifies you when people visit your profile or even that people like you that you don’t like. I don’t need the ego boost! Knowing people like me who I don’t like just makes me feel sad.

The feature I do really like is the ability to post videos. Watching a 15 second video of someone talking tells you so much more than a photo. I love getting that window into someone’s energy.

Oh! Also, like Shelli it rejected all my sexy photos. They weren’t even nudes! Just like a little bit of cleavage and it rejected it. I don’t see the point in a social media dating app if their guidelines are even stricter than the already strict rules of Instagram.

I am many things actually!!

Reviewing TAIMI was my idea. I found out about it on a twitter thread where the OP was asking what apps poc were using to find hookups; I was curious as someone looking for hookups but also looking for my Taurus wife (my DMs are open). I will say that is one thing that has impressed me about TAIMI off the bat, the number of black women on it is way more than I’ve encountered on any other dating app. This is a draw for me, I don’t necessarily exclude white women from my dating pool but I highly prefer to date other women of color.

I find the app itself to be pretty sleek and sexy. Something about the black layout really does it for me. I like that you get a full view of a person’s photos and can swipe left or right to dismiss/match. One thing I don’t necessarily like is that you get a notification when anyone likes you. You also get notified when someone views your page like its linkedin. Which means they get a notification when you’ve viewed their page. I like to do my creeping in privacy so that feature is one I could certainly do without. TAIMI sends you notifications when someone is near you, which I suppose is very similar to Grindr but it freaked me out a little bit. Like I once passed someone in a store and then got a notification about it moments later. It’s just not the best part about the app you know?

The app is like Shelli once described it, “facebook, instagram, and tinder all in one.” You can post stories and statuses, add captions to your many pics. There is so much going on with this app, maybe a little too much. I get the impulse to want to set yourself apart and go beyond just being a dating app to being a social networking platform. But seeing as it was pitched to me as a hookup app, I don’t really use much of the other features except for swiping. I do like this app. I’ve matched with a few people and started some conversations that could be going somewhere, I’m not sure yet. I do want to reiterate that the demographic for this app is super diverse, it’s definitely within my comfort age range unlike XO and seems to have way more promising matches. 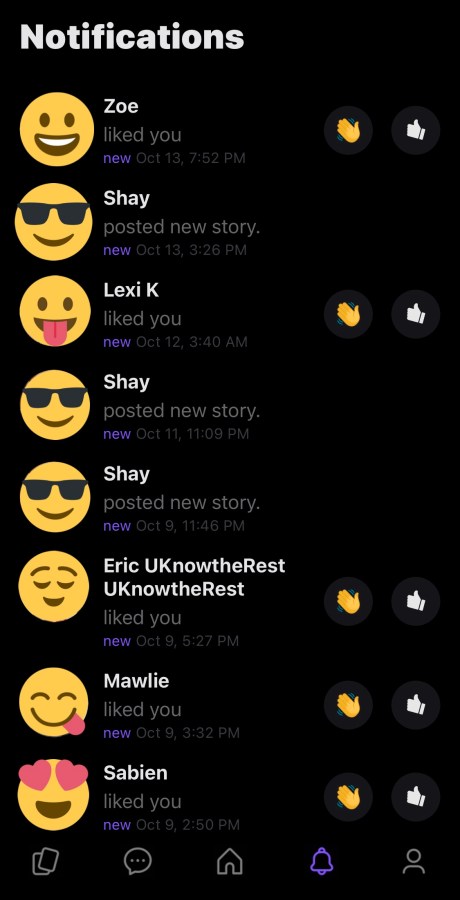 It’s not not an ego boost

You will get a lot out of this app if you have the time to dedicate to it. It’s essentially adding another social media profile to the others I am sure you already have, and actually keeping up with it.

It’s not as easy as swipe and match, there are about four steps in between the two when you’re using TAIMI. The people I matched with were asking why I hadn’t posted to my wall, or when I would go live, they were wanting more information about me to be on the app which was a fair ask. I am used to asking for or giving out my IG or Twitter handle by the 3rd message so the person I’ve matched with can go there to learn more about me. TAIMI is set up so that you don’t have to do that. But just like with other social media, you have to be diligent and actually participate on the app if what you are seeking out of it is interaction and connection.

So while this one isn’t for me because I am not looking to maintain another social profile, it’s allure is attractive. I got to call myself a “Circuit Queen Activist Top” and while I’m still not entirely sure what that means I am forever grateful to TAIMI for introducing me to it.

I feel like I can’t really criticize the success of this app, because I haven’t invested the time to use it thoroughly. My profile isn’t much different than my standard Tinder profile. I didn’t even record a video despite liking that feature! I think it might just not be for me. It’s a bummer, because I wish Tinder had this many trans women and I could see myself returning to it someday for that reason alone. But mid-pandemic I just don’t have the energy.

Again I’ll say I do like this app. I need to be better about using its other features as well as the more hookup centered ones. I think it’s a cool concept and stylistic is an app I enjoy way more than any I’ve encountered. I will say it was unusually difficult to change my settings because…I couldn’t find them lol. There are so many avenues and pathways to go down because of TAIMI’s many functions that I think basic things like adjusting your age range get lost in the shuffle. If you have the time to dedicate to exploring all of its functions it will be well worth the download.