I bet the people in charge of the DADT “review process” thought they would be able to avoid negative media attention just because they gave us virtually no information about their plans and developments on the repeal, huh? Unfortunately they did not realize how obsessive and prone to speculation gay people on the internet really are! While we have no real developments to report after our badass breakdown of the DADT survey being given to soldiers, we do have several ideas about what the future may or may not hold.

First of all, the New York Times has a theory about the future of conscientious objectors – while they’ve traditionally been peacenik pinko commies and Quakers (holler!) who are excluded from military service because of religious or ethical objection to war, it’s possible the “new conscientious objector” could be a religious conservative who objects to homosexuality. They interviewed J.E. McNeil, a Quaker lawyer specializing in the legal negotiations surrounding conscientious objection, and she says she’s already been contacted by people who say their religion prohibits them from, you know, knowing that homosexuality exists. “This is just the beginning,” Ms. McNeil said. “When the other shoe drops and the policy actually ends, I think we’re going to get a lot of these.” (@nytimes)

The most obvious response to this is one that McNeil raises herself in the article – all soldiers in the military are already serving with homosexuals, they’re just protected from knowing it by their homophobic administration. Logically, if a religious objection to homosexuality prohibits you from serving in the military, it should also prohibit you from going grocery shopping, taking public transportation, attending higher education, or coming to Christmas at my house. Furthermore, this disturbing but hilarious comic-book-style military handbook from 1993 makes it pretty clear that soldiers were already aware that there was a lavender menace in their midst, even if they did have to draw a lot of picture about their feelings in order to process it. But proponents of the “new conscientious objection” don’t seem to see any disconnect there, which leads us to wonder what their strong and committed faith really does forbid – having to treat someone like a human being even after knowing for sure that they’re gay? Laying awake at night wondering if the cute private in the same tent thinks they’re dreamy too now that they know they like girls/boys? Are they afraid that now all the homos are out and proud that they’ll demand to watch Ru Paul’s Drag Race during TV time? At this point, it’s pretty unclear. (@sociologicalimages) 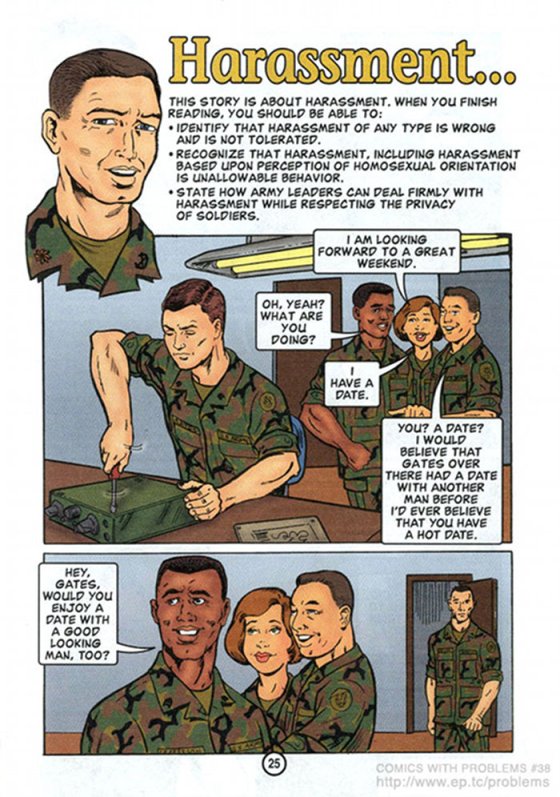 Maybe this will be nothing; maybe the “new conscientious objectors” are like Bumpits, good for a chuckle when you see them on late night TV but ultimately not a game-changer. If they do turn out to be A Thing, though, I’m honestly unsure of how to feel. On the one hand, it would be insulting to have the government seriously classify us as a legitimate religious abomination, and it would set a disturbing precedent – what if doctors could object to treating gay patients, etc. But on the other hand, would the actual outcome of this be so bad? Consider the situation now: there are gay people (hey Lt. Dan Choi!) who really want to be in the military but aren’t allowed to, and there are bigoted people who are supplied with guns by the military. If DADT was repealed and then homophobes were allowed to file as conscientious objectors, then people who really want to be in the military would be admitted, and people who didn’t want to be in the military would be allowed to leave it. Who is losing, exactly, in that scenario? Besides the military-industrial complex or something?

Of course, like anything having to do with military and/or religion, this is up for heated debate. And of course, like everything else related to DADT, (for instance, the speculation that Senator Robert Byrd’s death may have lost us a critical voice for repeal) we have little to no verifiable information on this, so it may or may not even be a real thing. Which means that your thoughts and feelings on this issue are at least as valid as any of the actual reporting on it, so feel free to share! (@ontopmag)