Two Sentence Horror Stories is a CW show, so of course you know it had to be gay. Though I won’t lie to you, there was a point in my Season 1 viewing that I kind of hoped it wouldn’t be? I have a complicated relationship with this show, is what I’m saying. But by the time it got to Season 3, I was ready for my regularly scheduled dose of CW sapphics.

So there are two ways you could watch and critique this show. First, as it’s presented: a horror anthology. To which I say…C+. I am certainly biased and maybe even jaded having seen many horror movies and being very hard to spook, but a lot of these stories are either a little too shallow and predictable, or so out there they’re not even close to being scary. The metaphors are sometimes cloying and the “social commentary” can be a bit heavy-handed and eye-rolly at times. Some of the episodes are downright bad! There I said it. But there are some diamonds in the rough so I couldn’t bring myself to stop watching entirely. Season Three seemed especially promising, and as you have probably guessed, ended up delivering in a big way.

All that said, if you remember that maybe most of the audience is teens who don’t have a ton of horror experience, maybe this is a fun way to get bite-sized examples of storytelling and bending expectations under your belt. You can learn from both good and bad examples, after all. (If I taught a Writing the Essay class at NYU we would absolutely dissect episodes of this show and discuss whether the issue was in the two-sentence story or the execution of the episode and how we would improve it in short story form.)

Each episode of Two Sentence Horror Stories is based on…well, what it says on the tin. Each episode is fully contained, and to its credit, most delve into a unique background or perspective or culture and from what I can tell from cursory searches, seem to be own-voices stories instead of one Ryan Murphy type trying to tell the whole gamut. In fact, it’s an all-female filmmaking team and most of the writers and directors credited are women. The first sentence of the story is presented at the beginning of the episode, and then the second sentence is presented at the end when you know the “twist” or angle.

For example, in Season 3, there’s an episode called “Plant Life” and the first sentence is, “It’s dangerous to ignore Mother Nature.” Then after the man ignores his husband and the plant he buys him from what is apparently a Little Shop of Horrors turns him into a tree, the second sentence is, “I get the message when her roots tear through my skin.” Very strange! Quite odd. Not my favorite.

There are some good ones though, like “Toxic” that is a metaphor for toxic masculinity gone wrong, and “Teatime” which has Karen Brewer from the new Babysitter’s Club as a babysitter’s nightmare charge.

But the one we’re here to talk about is Season 3, Episode 5: Teeth. Written by Lisa Morales and directed by Kathleen Hepburn.

The story starts as they all do, with one sentence: Before I met you, I was in a dark and lonely place.

We follow lesbian couple Olivia (played by Savannah Basley aka Cleo Clanton from Wynonna Earp) and Cara (played by Naomi King, queer actor who uses they/them pronouns) as they go on a road trip to the woods because they’ve apparently never seen a horror movie. Cara thinks they should move in together, but Olivia thinks it’s too soon; there are things about her that Cara doesn’t know yet. They stop at a gas station for directions to their cabin and are confronted by locals who growl at them that they’re not welcome here. “Your kind,” they hiss. Cara starts to demand to know which of the three marginalized groups her and her girlfriend belong to they’re specifically referring to, but Olivia quietly ushers her back to the car, asserting that they’re not worth the trouble and they should just go to their cabin in the woods. 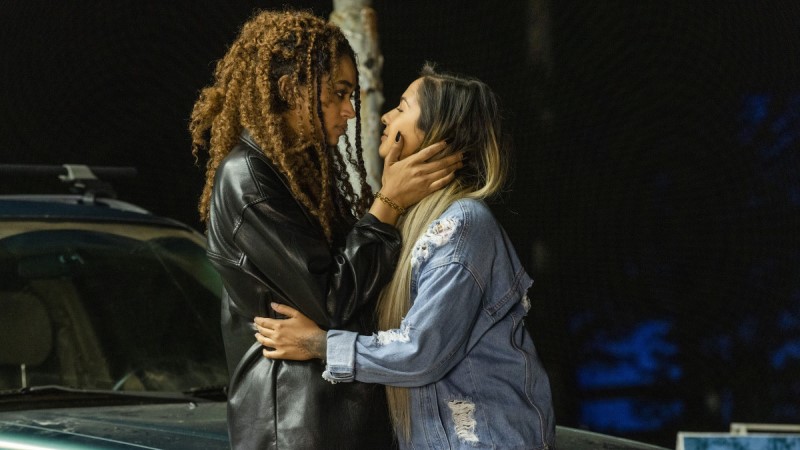 These two kissed more in this short episode than most canon lesbian couples kiss in 22 episodes on a CBS show.

However, it’s clear Olivia is shook when they get there; she doesn’t even notice the flower petals Cara put out for her, and she almost jumps clear out of her skin when the person who rented the cabin to them comes by with a welcome basket. Eventually Cara convinces Olivia to settle in for a romantic evening, and Olivia starts to relax. 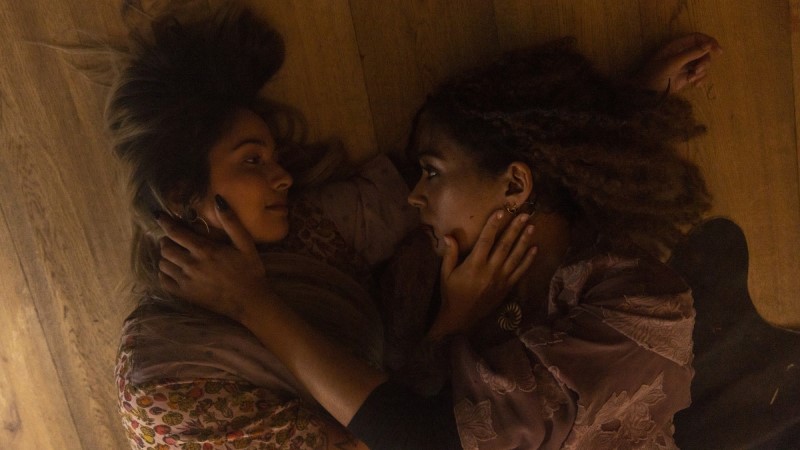 Lying on the floor is gay culture.

But the duo is soon interrupted by the locals, who aren’t just homophobic and/or racist and/or sexist, but are actual literal monsters, a blur of fur and fangs.

Olivia knocks Cara out to keep her safe and takes out these beasts, and when Cara comes to, and asks what the hell happened, Olivia admits that they’re in werewolf territory, and the wolves are mad because…she’s a vampire. 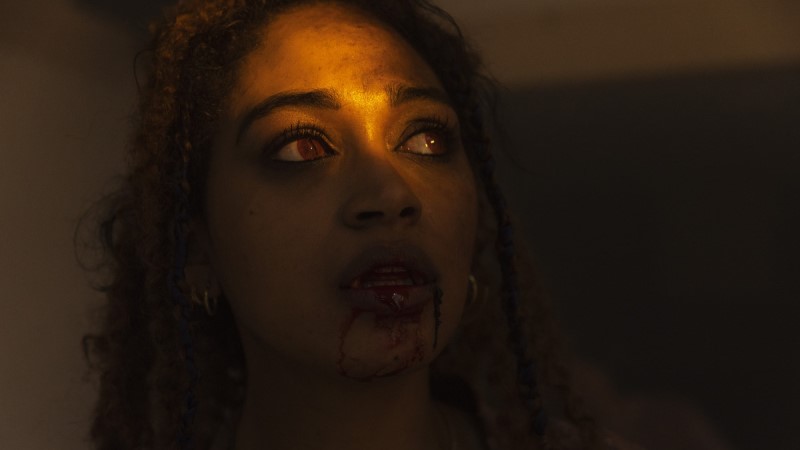 Olivia was going to tell Cara on this very trip, because she was alone for so long but then she met Cara and finally had hope again. She’s ashamed this is how Cara had to find out and is ready to step into the sunlight to atone for the pain she’s caused, but Cara stops her. She says Olivia doesn’t have to be alone ever again. “Forever can be ours.”

And there the episode ends with the completed two-sentence story:

Before I met you I was in a dark and lonely place.
Welcome to the darkness, my love.

And frankly, I would watch that movie! Specifically starring these two, same premise, just…more! I want to see the flashback story Olivia briefly voiced over about how she got turned into a vampire, I want to see the flashback of the moment they met, I want it all! It was hands down my favorite Two Sentence Horror Story episode, and yes I am absolutely biased because it had three of my favorite things: vampires, lesbians, and werewolves. (And bonus points for a Wynonna Earp actor.)