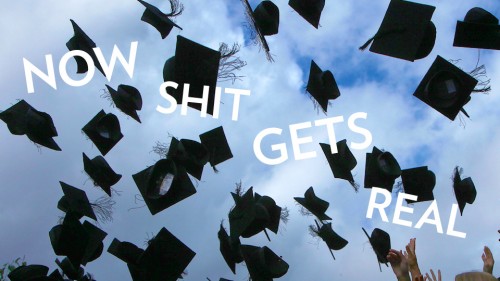 It’s the time of year when the internet is deluged with condescending lists of “advice for graduates”—stuff like “experience Paris” and “learn to wear purple until you laugh until you cry until you laugh”—and since all of that shit is just literal barf smeared on a laptop screen, I decided I might as well take a stab at it myself. Let’s help some kids.

1. Experience Paris. Just kidding.
You know what? International travel is great and all, but it doesn’t magically turn you into a genius or a good person. If you make it to 30 without ever having had the financial flexibility to purchase a $1000 plane ticket, then you’re pretty much just normal—not some barefoot hill-goblin. And you know what? Everything in Paris is fucking covered in gruyere. You’re only 22-years-old (or something). Do you really want to get sick of gruyere already? Seriously. You want gruyere in your life for as long as possible.

2. This is the most important thing of all the things: you think you know stuff, but you don’t.
People act like college is this gateway to adulthood, but it’s really just more playtime. Adulthood is the gateway to adulthood. It’s not that you’re not smart, but I’m like a decade older than you and I’m STILL half baby. I only know like two things at this point, and I am literally the Albert Einstein of being in my twenties. You’re going to keep learning stuff constantly for the next 50 years or so, so just calm down and let the learning happen.

3. No one wants to hear about your semester abroad in Thailand.

4. Take all the help. Take it!
Okay, so there are no jobs, you have tons of debt, and everything is fucked. I’m sorry. If moving in with your parents for a while is a viable option, if you have the ability to ease into independence, you should take it. Otherwise, when you actually become independent, you’ll have thousands of dollars in credit card debt and a shitty rental record, and then when your car gets towed because of unpaid parking tickets you won’t be able to afford to get it out of the impound lot, which means you essentially just went into debt so that you could give away your car. These things affect your credit for years and can come back to screw you even after you’ve learned your lessons [Ed: After ten years, I’m still dealing with the effects of my just-out-of-school credit fuckery. Take this advice VERY seriously. Don’t be me.]. So if you have help available to you, take it. If you can, move in with your parents and get an unpaid internship. Then get another unpaid internship. Write a blog or whatever. Get to know people in your chosen field, don’t be a presumptuous dick (nobody owes you shit), and remember that it’s your privilege (i.e. parents) that got you here. Your responsibility as a privileged person is to not be a Republican.

5. To the non-privileged people, yes, you will have to work harder than the people in item #4, and that completely sucks.
The world isn’t fair. I’m sorry. It just isn’t. But take the job you have to take, and try and do the work you love in your free time. Chances are, you’re smart and tough and not a dick. That will help.

7. Say yes to everything. Take the meeting.
Any job in the field that you eventually want to get into is better than any job that’s not in that field. Pay your dues. Nothing is beneath you right now. And be shrewd. Like, if you graduate from culinary school and what you want is to be a fancy chef, it’s better to get a job as a dishwasher at a nice restaurant than as a line cook at Denny’s. I thought I wanted to be a writer, so my first unpaid internship was at a shitty fake magazine that was owned by these super sleazy Young Businessmen in the Valley. It was basically just a coupon book that kept the dudes afloat while they focused on their real project—inspirational corporate fire-walking. So mostly my “editorial internship” consisted of picking up firewood at a seedy lumber yard and driving it across town to this weird, empty porn-condo that, I guess, was Creepy Firewalking, Inc.’s HQ. Then the dudes would touch my arm and try to get me to walk on hot coals because “it’s spiritual,” and then they would give me $20 and it felt dirty. It was fucking awful, but I’m still glad I did it, because I totally got real magazine jobs later. Resumes are all smoke and mirrors anyway.

8. Be nice to your parents, because they are going to die and you will be sad.
Unless your parents were horrible, in which case fuck your parents! (Not literally.) One of the best things about being a grown-up is that you get to burn bridges with people who are complete dicks to you. You make your own family now.

9. That said, you should also never ever burn any bridges.
My dad was literally nice to everyone he ever met for his entire life, and every time shit got complicated some old rando would pop out of the dumbwaiter and be like, “Hey, do you want this job? I love you!” He called it luck, but I call it being fucking nice to people. (Just kidding, we didn’t have a dumbwaiter. But maybe you can, once you get one million jobs from being so nice all the time!)

10. You are a no-strings-attached person right now. Congrats!
This is your big chance to be responsibly poor, before your poverty starts fucking up anyone else’s life. You (probably) don’t have kids, a spouse, a mortgage, or responsibilities of any kind. What you do have is the stamina and the drive to cope with a staggering amount of discomfort (i.e. an air mattress in a windowless closet in a garbage shack under the freeway with 13 vegan roommates growing white-people dreads) in the name of freedom (i.e. an unpaid internship supplemented only by your busking salary and plasma sales). Do it now. Because believe me, by the time you’re 30, you won’t even have the patience to sleep on a fucking couch, let alone share a microwave that smells like the ghost of Braden’s ravioli.

11. Don’t get confused, though: Unless you are actually poor, you are not actually poor.
I know I said “poor” in item #10, but I was being lazy. I’m sorry. What I really meant was “broke.” Don’t get some chip on your shoulder about how disenfranchised you are because all you have is a liberal arts degree and 100 Top Ramens. It will make you sound silly and careless. Some people have been systemically disadvantaged their entire lives and now they live in their cars and don’t even have Bottom Ramen. Here’s an easy way to tell the difference: If you got arrested, do you have someone that could bail you out of jail? If the answer is yes, then you are broke and not poor. “Poor” is not a game. You are “broke.”

13. Invest in potatoes.
Potatoes are delicious and they cost almost negative money. Any idiot can cook a potato, and if you’re following this guide, there’s a good chance you’re going to be very hungry for a very long time. Potatoes!

14. If you must make art about your own life, go for it.
But don’t expect anyone to take you seriously until your life actually has stuff in it.

15. Don’t believe anything that someone sitting at a folding table on the street tells you.
They are either a weird monk who wants to give you a “free book” for $15, or they think 9/11 was an inside job, or they want you to sign up for a garbage credit card, or they are Lyndon LaRouche.

16. It’s time to figure out your weird sex stuff.
I know that when you were younger you hated yourself for liking anything besides tender vanilla caresses, but hush. If you can only self-lubricate by imagining that your mattress is stuffed with Michael Landon’s hair, embrace it! And remember that there is someone on the internet who has an actual mattress stuffed with Michael Landon’s actual hair, so you are not even close to being the creepiest Cheerio in the box. Also, if you really just like tender vanilla caresses, that’s adorable! Do that! Don’t let anyone tell you what to do with your parts.

17. None of the stuff that you think is a big deal is a big deal.
Like, nobody on the entire earth cares if you got your period and stained your pants. Fuck, nobody even cares if you just SHIT your pants. Just go home and change your stupid pants! People have bills to pay! People are busy! No one is looking at you!

18. Don’t structure your life based on lists on the internet.
That’s crazy. You do you, special snowflake.