A long, long time ago, in a darker era, we were in a barren desert of LGBTQ+ women on TV. Lesbians were few and far between, and all the other identities were rarer still. It was the age of 22-episode seasons that only aired between September and May, and you had to watch it on your TV, whether you caught it live, taped it via VCR, or, later, Tivo’d it. But things have changed. Many shows have opted out of the 22-episode format, going for 13, 10 or sometimes even fewer episode seasons. Live TV is still a thing, but it’s a thing we do “together” now on the internet; and if you miss an episode, you don’t need to have planned ahead. You can watch last night’s episode of just about anything on your laptop, your tablet, or maybe even your phone. I recently watched a Netflix show I downloaded onto my phone on a plane. If you have access to it, the internet will provide.

And one thing this means is the desert isn’t barren anymore. Sure, we’re still a bit thirsty, and a bigger oasis would be nice, but things aren’t nearly so desperate. And part of the reason is because the barriers between a person who wants to create unique, diverse, inclusive content and consumers have decreased. I’m not saying it’s easy by any means, and things are changing on the other side of the barrier too (for example, a lot of writers rooms with queer characters or characters of color are slowly but surely realizing that it would be in their best interest to hire queer and WOC writers. Very slowly. But surely.) But thanks to internet-based companies like KindaTV, people like us have a platform to make content for, well, people like us. 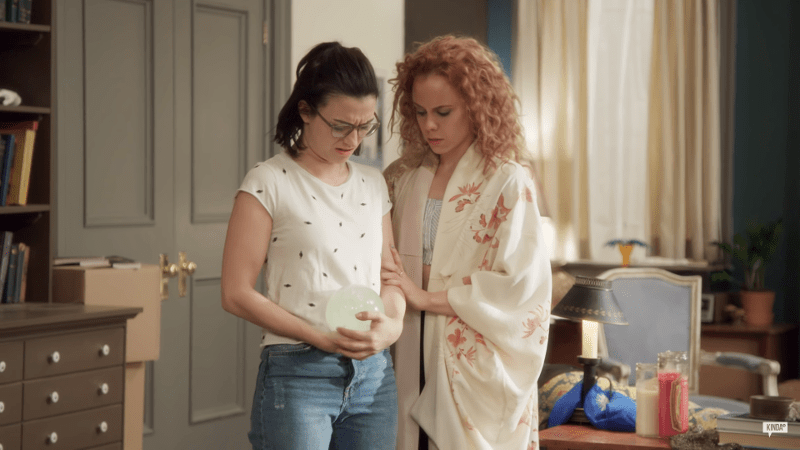 “Is queer people making queer content going to save the world?” “All signs point to yes.”

And Carmilla alumnae Natasha Negovanlis and Annie Briggs got together to do just that. CLAIREvoyant is a quirky, fun, mystical comedy about two best friends and roommates, Claire and Ruby, who find themselves in a bit of a financial pickle. They decide to pretend to be internet psychics for some quick cash, then realize Claire might not have to fake it after all. 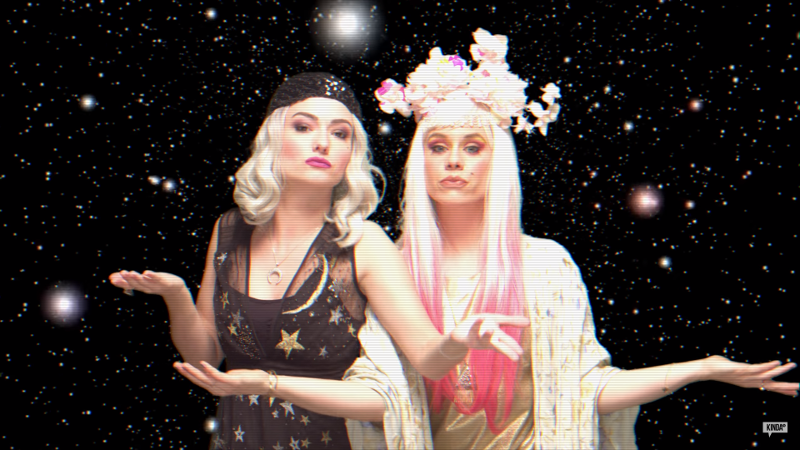 I cannot possibly convey to you in words how perfectly ridiculous their attempts at some kind of Long Island (??) accents are.

The story centers around their friendship, but also has a few side stories about Ruby’s near-live-in boyfriend who only speaks French, and Claire’s crush, Nico. 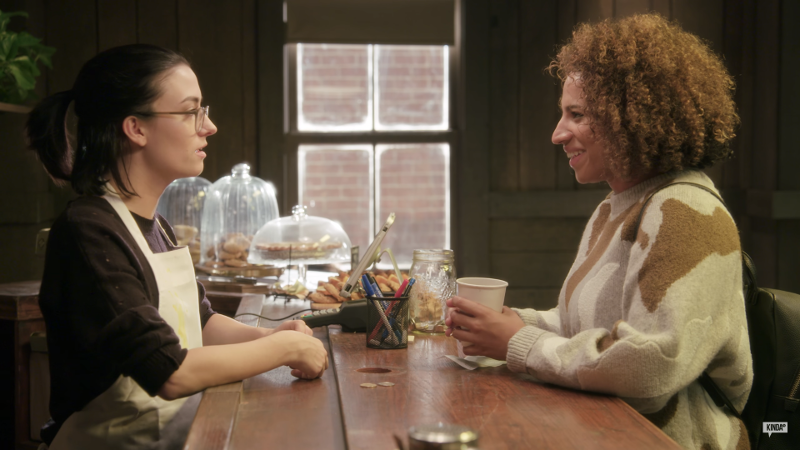 So awkward. So real.

Side note: I turned on the captions on YouTube since no subtitles were popping up when Ruby’s boyfriend spoke French to see if it would help, and not only did the captions provide me the English translations… 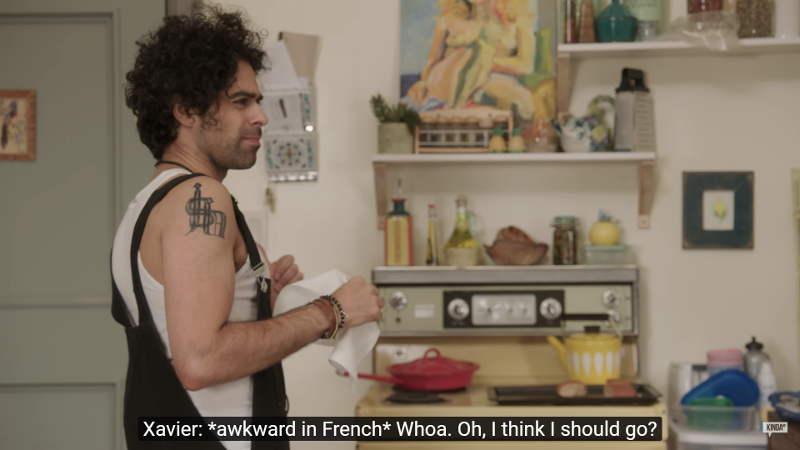 I see that painting in the background, ladies.

…but they also provided hilarious commentary along the way. 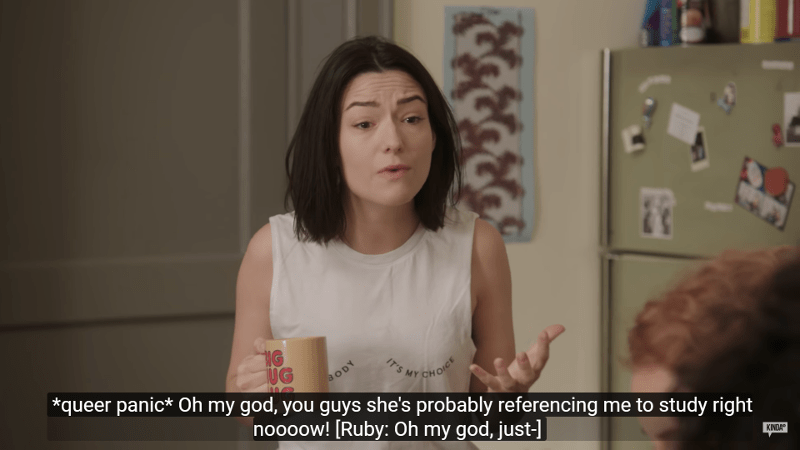 One of my favorite things about CLAIREvoyant is that it was just… casually gay. The first episode declares it Claire’s 25th birthday, and they mention her crush (and show her in one of those rom-com, wind-blowing, slow-mo close-ups) right away. There’s no questioning that Claire is into girls, but there’s also not a whole conversation about it. It’s obvious, it’s important, it’s at the forefront, but it’s not the whole point. There were little touches like rainbow flags on top of their refrigerator or outside the cafe where Claire worked. It’s gay in the way most of our lives are gay; gay people aren’t all talking ABOUT being gay all day every day, but we ARE gay all day every day. (Probably. Most of us. I don’t know your life.)

I also found this show very relatable as someone who has been a 20-something with close female friendships who is bad at flirting. One of the most relatable moments, for me, was a small one: at one point, after Nico leaves Claire’s cafe, Claire lets out an excited squeal. 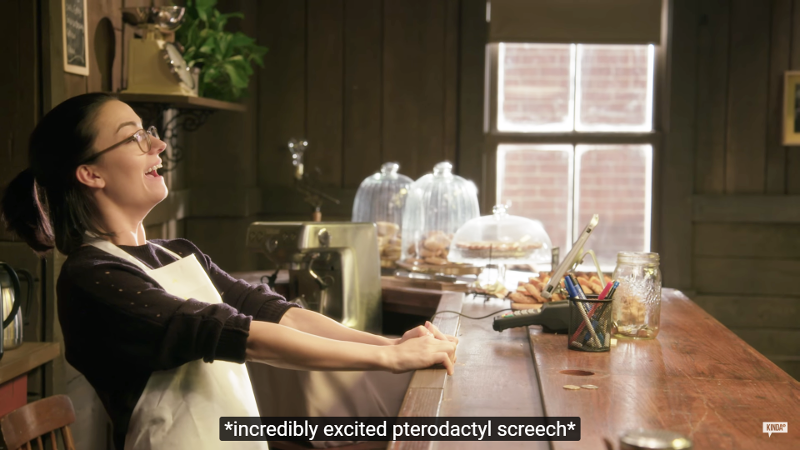 Claire and Ruby’s friendship is loving and close, and their fights felt real. The mystical elements of the show are silly, but not in a bad way. It gets more ridiculous as the episodes go on, but the climax of the mysticism had me laughing pretty hard. What’s most important to me is that it felt like the actors were all having so much fun.

Combine all of the things I’ve mentioned so far, plus some other things I haven’t mentioned because spoilers, mix in all the badass women on screen AND, importantly, also behind the scenes, and you have a feministy, queer, fun romp on the internet.

Every episode is on YouTube, and I think the longest episode is under 6 minutes, so the whole season goes by quickly, either in snack-sized batches, or in a binge that would take you about an hour. And now, with the power of the internet, you could watch it anywhere. Even in a desert.