Last year’s Halloween I was broke and feeling uncreative, so I went to the Castro with one of my partners and I wore an ironic homemade sign of twine and felt. It read “#GAMERGATE is actually about ethics in video game journalism.” Someone came up to me that night, said “Gamergate! Why you shouldn’t play video games!” Gave me a stern look and stormed off into the night. Most reactions were either offense or vehement agreement. (On the bright side I met two lovely ladies that night who got the joke and later we had sex, so all in all Happy Halloween!)

Next week I’m giving a seminar in San Francisco on sex and video games, at the Center for Sex and Culture and in conjunction with San Francisco Sex Information. (Tickets here, Facebook event here.) Lately I’ve been thinking about what I heard that night, “you shouldn’t play video games.” Video games have been a formative part of me since I was wee. I once wrote a post on tumblr about being trans and loving video games that got circulated so much I was interviewed half a dozen times and invited to as many conferences to speak about my experiences. I love games and I’ve had a good experience at industry events, for whatever that anecdotal evidence is worth.

There is a lot of real harassment and hate and vitriol. Mountains, literal mountains (I don’t know how words make literal mountains but bear with me here) have been written about it, though. Rather than preaching to any number of choirs, I want to talk about a bunch of video games and developers that do things right. 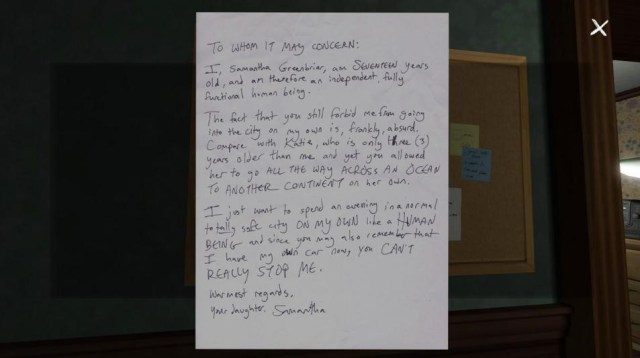 In the same way physical sex can have outer and inner erogenous zones, emotional sex can as well. Aftercare cuddles versus hearing someone say those perfect words. You don’t know what those perfect words are but you hope someone knows them and someone says them to you and for one brief moment you can experience a crystalline vision of being known and being loved. Our inner lives, and in particular our inner sexual lives, are the marble from which Gone Home carves its most masterful reliefs. In it you play Katie, a woman who returns home one night from a long trip in Europe. Her home is empty, her sister, father and mother are gone. Over the next few hours you explore the home, following a trail of notes and other evidence to understand what has happened to your family while you have been gone. It is beautiful and real and so hard and so queer and has also won more awards than there are stars in the sky. I’ll spare you the spoilers and nudge you in the direction of its greatness. You won’t be disappointed. So run along now, set aside some time, and bathe in your computer’s warm glow. 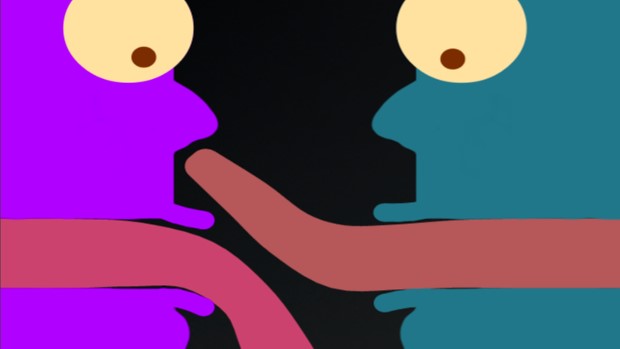 Kissing is WEIRD. What are you even doing?? Stop that. Oh no, oh no you’re doing it wrong. staaaaahp 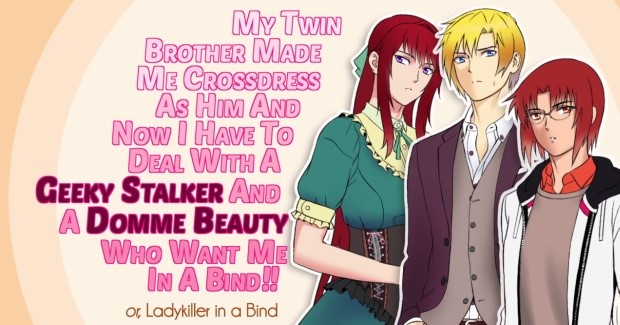 The games of Christine Love

Video game is a highly visual medium, obvi, and so when we think of the things we like about them and the things we hate, we tend to think of images, and less so words. How X is dressed, how gory Y is, how bland an environment Z takes place in. For those whom the written word is the end all and the be all, it’s hard to love video games without loving Christine Love. Her first game, Digital: A Love Story, is all about emails you receive from others, and you never see the emails the player character writes, just the way in which others reply to them. Yet you entirely understand who the player character is, what they want and feel. She writes a perfect image of someone without ever writing them. Speaking as someone who writes things occasionally, her mastery of the craft makes me weak in the knees. And then I fall down, because I need my knees to walk. Her games deal deftly with the dynamism of romance, the struggles of understanding one’s identity and desires, and about a thousand of other lovely things under the sun. I really recommend Analogue: A Hate Story, don’t take it personally babe it just ain’t your story and the upcoming Ladykiller in a Bind even though I haven’t played it and barely know anything about it, because such is the pedigree of her work.

Game lovers who are also word lovers oughta check out the works of Porpentine as well, particularly With Those We Love Alive, which has you literally pen the game’s significance to your body. (You’ll see.)

How Do You Do It?

How Do You Do It? by Emmett Butler, Nina Freeman, Joni Kittaka and Decky Coss.

You just watched Titanic (possibly for the millionth time, it’s probably the ‘90s and who can blame you) and so you mash your dolls together to try and understand The Sex. I don’t think we take kids seriously enough, I think because when we were kids we had a lot of important questions about sex shamed out of us. So we just pass the shame on down the line. If we can learn to acknowledge the very meaningful connection between sexuality we experience in youth and the kind we have now, I think we can go a long way to repairing the sexual repression that is so deeply ingrained into so many cultures.

Also I know I am the person writing this article, so ostensibly I am baking up all the fresh words here, but indulge me for a moment and allow me to serve you a day-old bagel. Porpentine said something spot on about the design at work in this game: “The open-ended design is really great. In a way, the spinning mashing poly-anatomical gyrations of the player are closer to queer sexuality than the heteronormative coupling suggested by the Barbie appearance of the dolls. It makes me think of the way sexuality starts out polymorphous, then gets molded into genital fetishism (the popular penis-in-vagina fetish), and then hopefully at a certain point you realize sex is unique to every human being on this planet…”

I totally recommend you check out another neat game about being young and trying to express yourself amidst disapproval! (Wheeee!) It’s call (try to) Dress Up, by Nivikan. 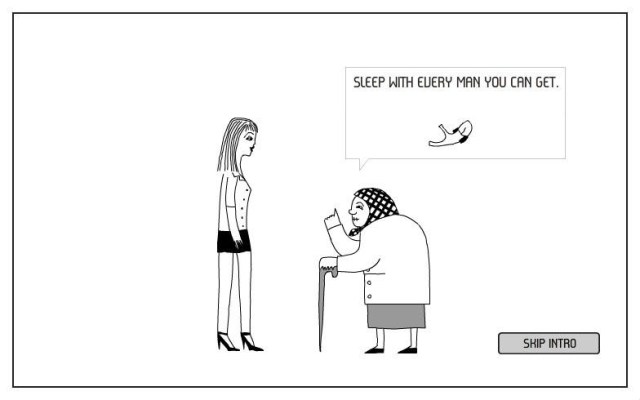 Ute‘s set-up is thus: your grandmother tells you to “sleep with every man you can get” before you have to settle down and get married. As Ute you wander the streets, sleeping around until there’s only one man left, who then becomes your husby (whether you like it or not). There’s a fascinating divide in the power dynamics here, as Cara Ellison drew to my attention in the inaugural post of her phenomenal S.EXE column. On the one hand, sex ends when Ute climaxes, not when the boys do. The guys are the one’s more ruled by their insecurities, as they refuse to sleep with Ute if they see her with another man, and their sex entirely revolves around their job rather than any other identity.

On the other hand, if there is a man that Ute wants to be with (in a married fashion), the mores instilled in her by her grandmother prevent her from directly seeking him out. It’s Respectability Politics: The Game! Everyone here is enslaved to things that other people gave them and there’s no sense that they can achieve what they really want for themselves. Cis het friends have tried to explain to me the mating rituals commonly involved in their courtship (you can’t have sex on the first date, etc.), but this game made way more sense of them for me than anything anyone ever told me. It’s an educational experience, as well as a solid puzzle and rhythm game players looking for a good challenge. 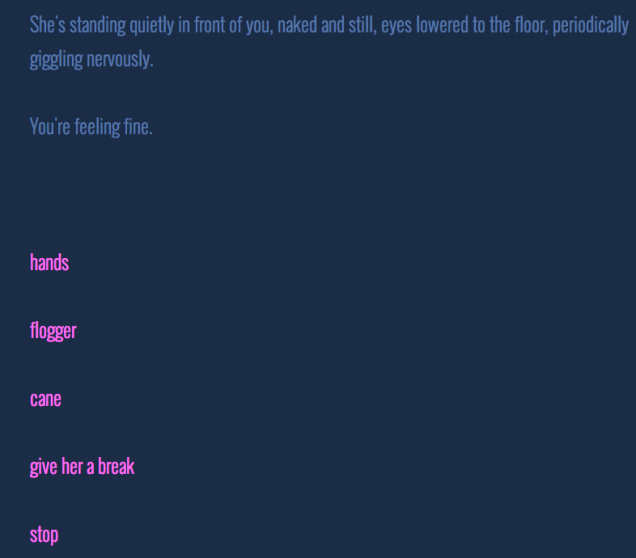 Your partner wants you to hurt them until they cry. You’re happy to help out! Aren’t you sweet? Like a lot of my favorite indie games with sexual themes, this game is more about the text at work than the visuals. It allows you to fill in any gaps with your imaginings (and your libido, which is often supes happy to lend a hand, as in your hand)! Rather than, say, depending on awkward wireframe mockups to communicate the movements of the human body. You talk and listen to your partner while things get kinky, and learn to change up the pain in response to their reactions. It’s elegant. It’s hot. I’m thinking about it right now and how it reminds me of my own experiences and I need to… uhh. Y’know, you won’t mind if I step out of the room a sec? I have a thing, an important thing. Yeah. You’ll hardly notice I’m gone. 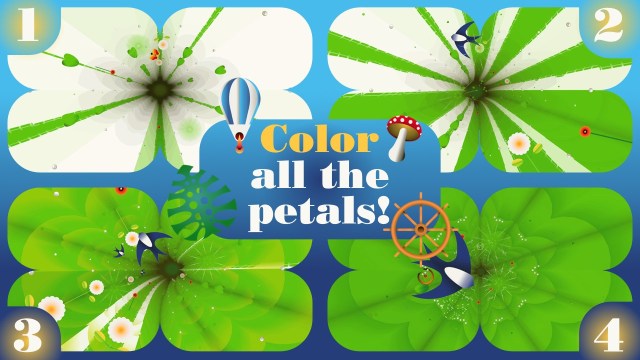 Luxuria Superbia by Tale of Tales.

A touchscreen game where you journey through a cuddlier version of that tunnel at the end of 2001: A Space Odyssey, stroking and playing with the flower as you go (did I mention the tunnel was a flower?). Sighs and moans emit, and if you take your time and don’t rush it you can help the flower reach climax. It’s like detox for all those video games that gave you carpal tunnel from OH GOD TAP FASTER EVERYONE YOU KNOW AND LOVE WILL DIE IF YOU DON’T MASH EVERY BUTTON EVER MADE. This game gives you a gentle back rub and is like, hey, you’re fine, you’re cool, let’s have sexy fun times together.

That’s all for now, folks. Do come check out the seminar, this Tuesday, May 26th at 8pm. And thank you for consenting to read this article, you’ve been a champ. If you like reading things like this, I also recommend Cara Ellison’s Embed With, Leigh Alexander and Laura Hudson’s site Offworld, plus the games of Increpare and the writings (and games from) Video Games for Humans.

Join A+
Related:eventvideo gamesyou should go