In a historic decision, the Supreme Court has ruled that same-sex marriage is a constitutional right. The 5-4 decision, which was written by Justice Kennedy, ruled that states are no longer allowed to ban marriage between two gay people.

This ruling will allow same-sex couples the opportunity access many of the same rights and privileges as different-sex couples, like filing taxes jointly, hospital visitation without having to file a power of attorney, inheriting a spouse’s estate without being taxed for it, sponsoring a spouse for US citizenship, and more. Joint adoption of children will become easier for many, although there are still aspects of same-sex parenting that will likely pose legal challenges for families. 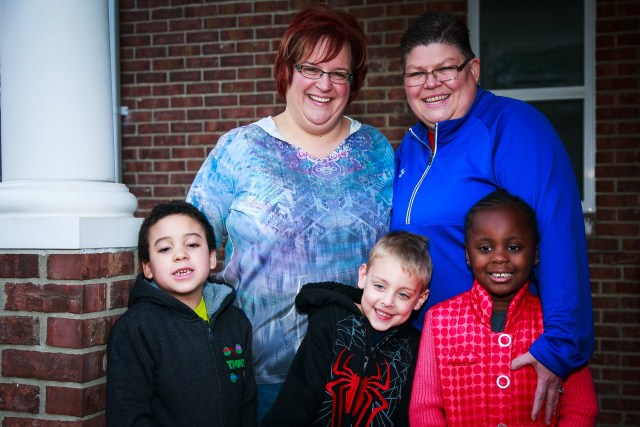 April DeBoer and Jayne Rowse with three of their children, via GLAD

However, as we all know well, this ruling (while groundbreaking and life-changing for many!) doesn’t fix everything. For instance, discrimination on the basis of sexual orientation and trans status is still legal in many states; it’s entirely possible for a now legally married same-sex couple to be fired from their jobs, or for the child they are both legal parents of to be refused admission to a school because of their parents’ sexual orientations. In recognition of the many hurdles that LGBT people still face and that won’t be addressed by this ruling, organizers with GetEQUAL and other organizations are standing outside the Supreme Court today carrying a banner saying “LGBTQ Liberation Can’t Wait” and dressed in black “reminding the American public, mainstream media, and other LGBTQ organizations that we must work toward liberation for all LGBTQ people.”

The plaintiffs in the cases that resulted in this ruling — April DeBoer and Jayne Rowse of Michigan, James Obergefell, Ijpe DeKoe and Thomas Kostura, and the same-sex couples involved in the case of Tanco v. Haslam — are examples of how much of a milestone this ruling will be for many LGBT families. WIth federal marriage equality, James Obergefell would have been able to have his name listed on his husband’s death certificate as a spouse when John Arthur passed away in 2013; April DeBoer and Jayne Rowse will have an added legal advantage when it comes to securing their rights to parent their children; Army Reserve Sergeant First Class DeKoe will have at least this one legal right against which to measure his military service to the US. This ruling is a landmark one that will likely be discussed in history books, but for right now and more importantly, it’s one that will make a difference in the lives of many in our community who need it urgently.