Welcome to Vintage Vapid Fluff, in which we take a step back from Kristen Stewart and kd lang into a wire-tapped time machine and bring you all the gossip our people required in the late 19th and early 20th century but alas, often had to go without. Today’s story, about African-American actress/singer Edna Thomas and British socialite/photographer Olivia Wyndham, comes to you from the early 1930s, via 2017. 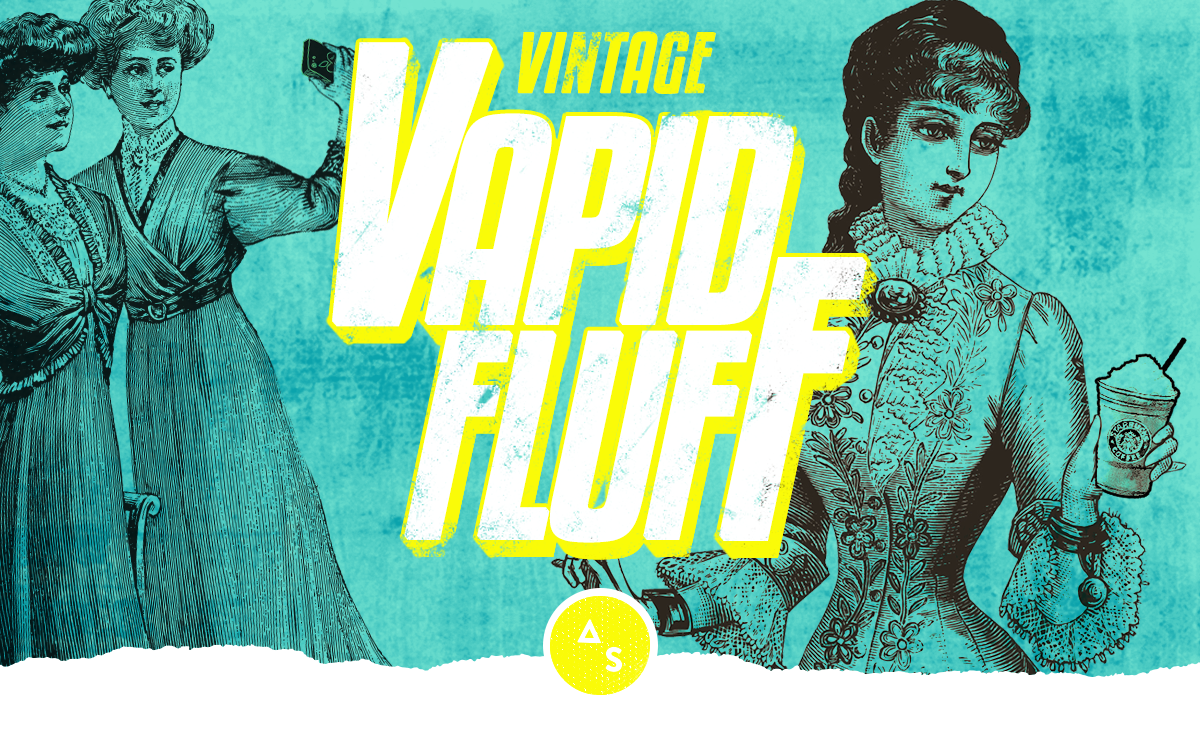 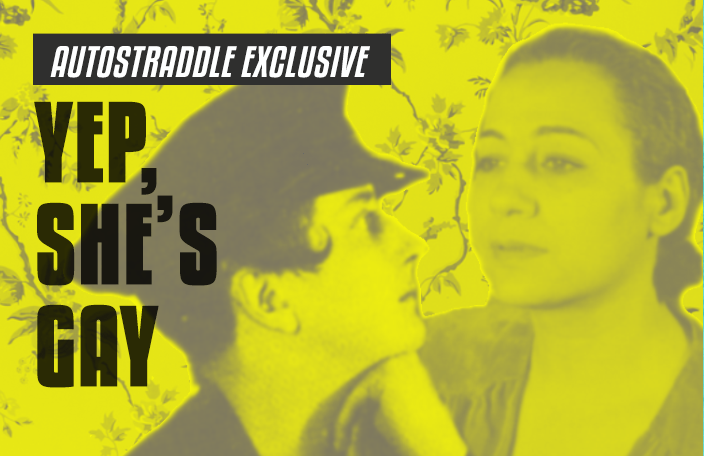 Ah friends, there’s nothing a Vapid Fluff fan adores more than a late-in-life revelation of lesbianism from an esteemed and wildly talented actress of color who is presently married to a man unable to worship his wife like the goddess we all know her to be!

It’s therefore my extreme pleasure to inform you that select private confidants have revealed exclusively to Autostraddle that 42-year-old actress Edna Thomas has been successfully seduced by 33-year-old Olivia Wyndham Spencer, formerly known to gal pals and cocaine dealers as the “Queen of the London Lesbian Scene.” What’s more, Olivia apparently moved in to the apartment Thomas shares with her husband, Lloyd, in an arrangement referred to by a friend as “that strange ménage à trois of herself, her husband Lloyd… and Olivia Wyndham, emigre to Harlem who remained the girl who had been the brightest of London’s bright young things.” 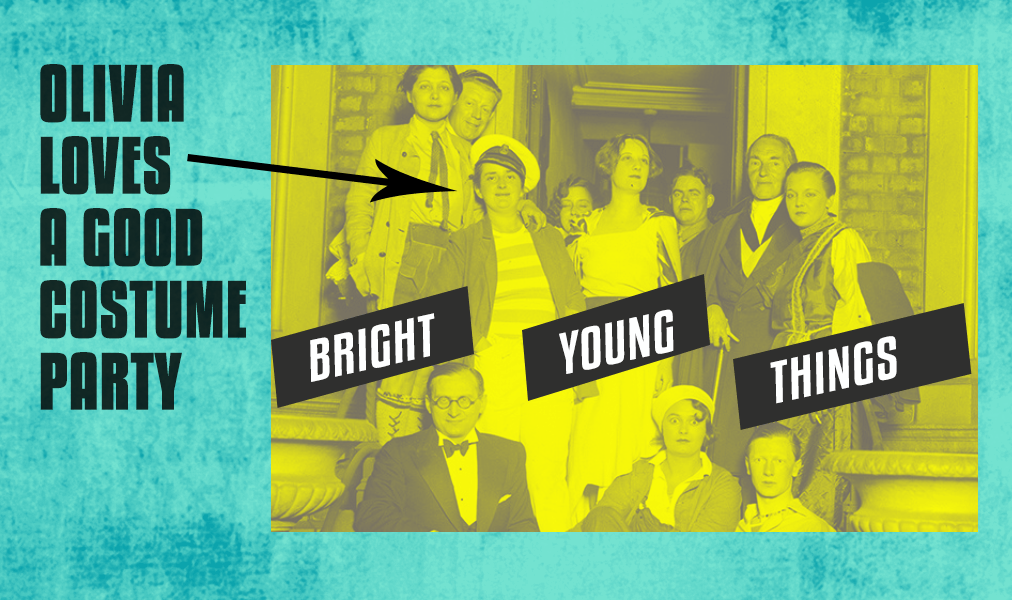 Ladies, Edna Thomas, one of the finest actresses of the modern age, deserves nothing less than the entirety of Olivia Wyndham’s devoted attention and deep coffers. The daughter of a 12-year-old Black nursemaid and the white man she worked for; Edna married, at 16, the son of a wealthy self-made man. Unfortunately, he turned out to be perpetually drunk and consistently unemployed and, soon enough, dead. (Tuberculosis.) Edna remains close friends with his father, however, who often stops by her Facebook page to give her new profile pics a thumbs-up, tell Dad jokes or remind her that she is “lookin’ good, champ!”

Following her first husband’s death, Edna allegedly met and promptly fell in love with Lloyd Thomas, an orchid enthusiast and a member of Harlem’s black elite, who’d eventually hit his career peak as the co-owner of Club Ebony. Edna was working for hair products entrepreneur Madame CJ Walker — America’s first female self-made millionaire and one of the most successful African-American business owners of all time — as her secretary. Lloyd was managing her hair salon, which used to regularly crush Shane For Wax in our local alt-weekly’s annual “Best Queer-Friendly Business” Awards.

Edna and Lloyd soon married. Despite Lloyd’s unsolicited opinions about the vulgarity of commercial theater, Edna’s star began its ascent, although she was perpetually impaired by the dark menacing cloud of racism, subsequent showers of limited opportunities, and the burning hellfire of white supremacy. She recorded Southern love melodies with Columbia Records and earned rave reviews as a stage actress. Also a fan of champagne and poker, Edna and her husband had a thriving social life chock-full of people you wish you were friends with. 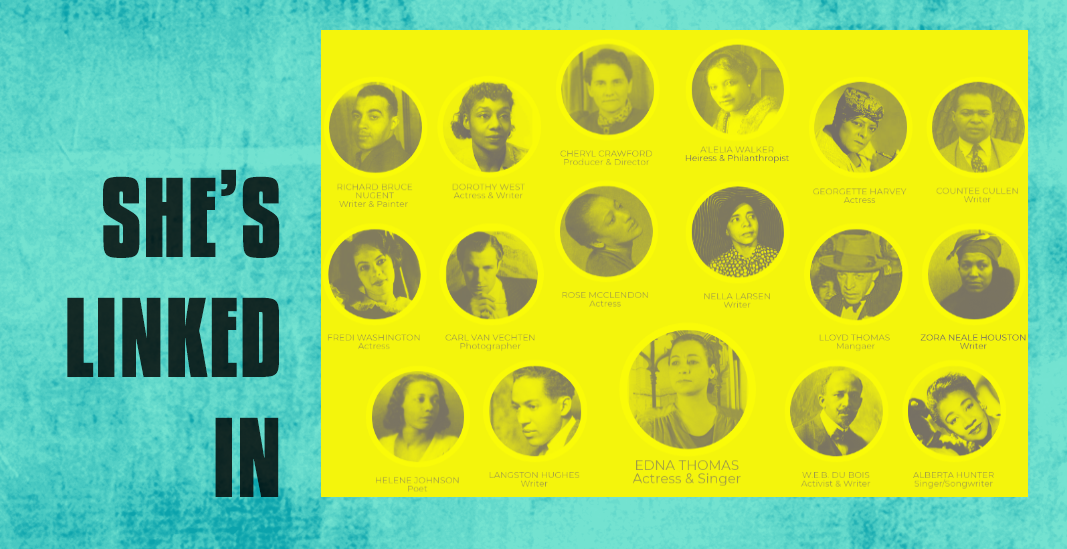 I made you this graphic of all her friends so

From here our many sources diverge in the woods on a snowy evening. By the time Olivia came ’round, Edna and Lloyd were already maintaining a sexless roommate relationship either because: 1) Lloyd was gay from the jump or 2) They did have sex at one point but stopped because he started riding the hobby horse with younger women while Edna was on tour and Edna was like “lol we’re never having sex again.”

Edna told a more-or-less reputable straight person that Lloyd was “dour, taciturn and indifferent.” Esteemed writer Dorothy West, a close friend of Edna’s, describes Lloyd as a “trifling” man who spent too much time in his bathrobe while Dorothy’s cousin Helene found him “one of the most intelligent men she had ever met.” Perhaps he contains multitudes. Let’s move on to the ladies.

Imagine the unfettered delight in store for Edna when, approaching her early thirties at the end of the 1920s, she simply danced with a woman and thereafter told aforementioned friends that “something very terrific happened to me — a very electric thing.” That dance with a woman, she gasped, “made me know I was a homosexual.” 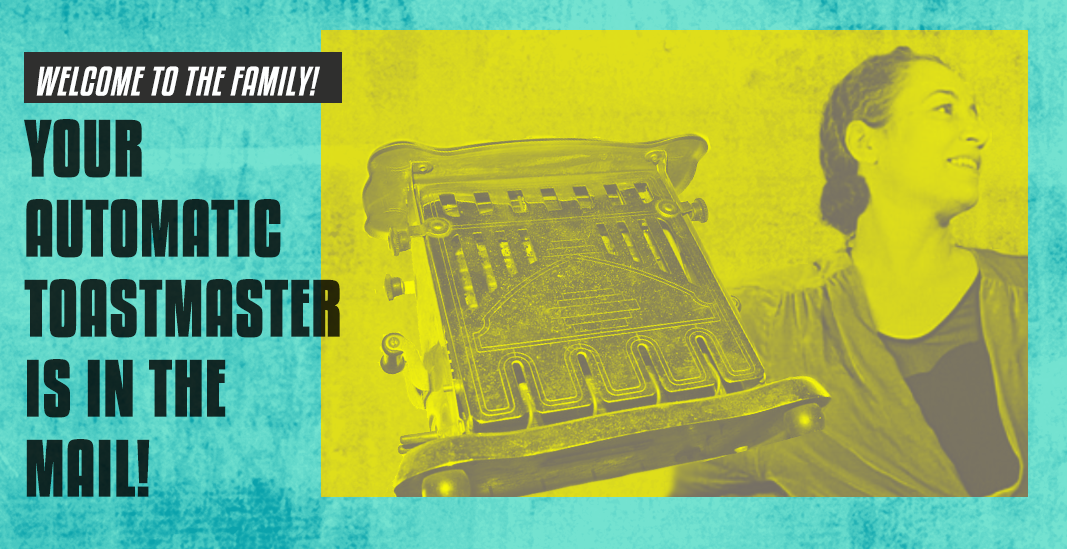 Although Edna toured in London with Porgy & Bess and ran in bohemian circles that intersected with Olivia’s, they didn’t meet until the noted Londonite arrived in New York in late 1929 to attend a photographer’s exhibition. Overseas, the unconventional Olivia had been a “wantonly promiscuous” member of the aforementioned “Bright Young Things,” a rowdy gang of hedonistic, sexually fluid, self-indulgent, intellectual and decadent socialites you may one day read about in an Evelyn Waugh novel or witness in a Dan Akroyd film from the future that will not be available on any streaming platform. Olivia, born into a family of “aesthetically-inclined aristocrats,” grew up in country houses and has been described as both “sturdy and stocky” and as a person with “an extreme sensitivity to the sufferings (however slight and however brief) of other creatures, animal as well as human.” Furthermore, Olivia is said to have always possessed a captivating charm and an affectionate nature that “won her many devoted ‘best friends.” Emphasis on ‘best friends.’

Once ashore in New York, Olivia reunited with Noted Rich Person Howland Spencer, another “eccentric and sexually ambiguous” human, who she’d initially met during The Great War. The two decided to marry at his family’s estate that spring, and Olivia looked forward to acquiring her first beard.

But first! A’Lelia Walker was having a thing. Yes, the late great hair cream heiress A’Lelia Walker, who passed away mere months ago, a little over a decade after the death of her mother Madame CJ Walker. We all recall A’Lelia’s star-studded funeral, covered with breathless enthusiasm by this website, which truly marked the end of an era. Regardless, in brief: A’Lelia, a passionate supporter of the arts and thrower of parties, threw the party in which Olivia met her future roommates, Lloyd and Edna.

Olivia fell “violently” in love with Edna on the spot. Edna was “definitely” not interested. She confided to several sources in her immediate vicinity that, “I avoided her because white women are unfaithful.” As all previous and likely future installments of Vintage Vapid Fluff suggest, this was an accurate assessment of the situation.

“She was persistent to the point of annoyance,” Edna added, not one to mince words.

Olivia, challenged but not entirely thwarted, went through with her planned marriage to Spencer, and then dipped out for just a sec to triple-check on Edna’s disinterest. A source revealed exclusively to a distant friend who revealed exclusively to my roommate while I listened through the vent, that on that particular home visit, Edna reported having “the most exciting sex experience of my life.” Yes, Edna experienced her first orgasm of all time beneath the deft lesbian hands of the decidedly toppy Olivia Wyndham, a passionate taker of initiative. This must have been what Olivia’s cousin was referring to when he confided to my dog walker who told my ex-girlfriend that Olivia is notoriously “something of a bossy-boots.” 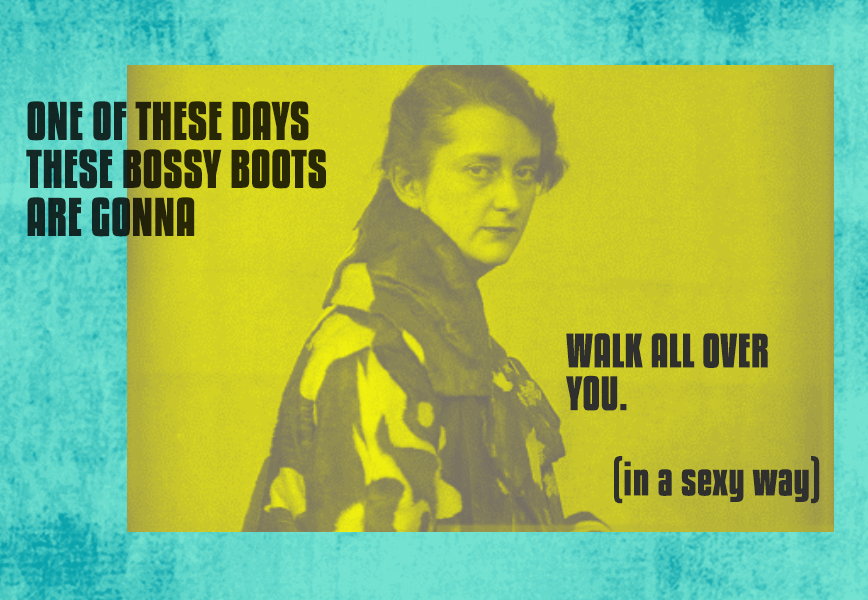 But! I’m getting ahead of myself. Olivia was undoubtedly touched when her Berengaria hit the shore post-solo-honeymoon and was greeted by her brother, Captain Dick Wyndham, who’d flown to Southampton in order to drop showers of rice on the docking vessel to celebrate her lavender marriage. But before long, Olivia was back in New York and had moved in with Lloyd and Edna. Together, they relocated from Greenwich Village to 1890 Seventh Avenue in Harlem, closer to the Federal Theater Project’s Harlem outpost. Howland, who is in his forties, wasted no time snagging a quickie divorce in Reno and Cougaring up by marrying a wealthy 70-year-old widow.

The highly problematic and notoriously Anglophile New York Amsterdam News lamented that Olivia “closed up like a clam” (ahem) when they asked about her marriage while interviewing her for a feature article she didn’t want them to write. Her peers apparently marvel that she’s elected to eschew the Rolling English Acres and Wide-Wingned Mansions of Willshire in favor of a modest apartment in Harlem, an area her friends anonymously comment to be full of “drugs, drink, crimes of violence and embarrassing excesses of childish religious fervour.” As if they weren’t having orgies, shooting heroin, wearing snakes as outfits and snorting lines of coke off Olivia’s ungloved hands a mere three years ago!

One family friend made the venture to visit Auntie Olivia in Harlem, and reported back to her family that Edna is “probably the warmest person [she] ever came across,” possessing “enormous magnetism, great personal distinction, and knock-down charm!” Meanwhile, Edna’s told her close friends that Olivia is “one of the finest women [she has] ever known,” and is “very dear to me, not just for sex alone.” In fact, Edna reports that Olivia is “tender and gentle as I have never known any one else to be.”

Edna allegedly told a straight person that “if marriage had been satisfactory, I would never have had homosexual relations,” which; okay sure. 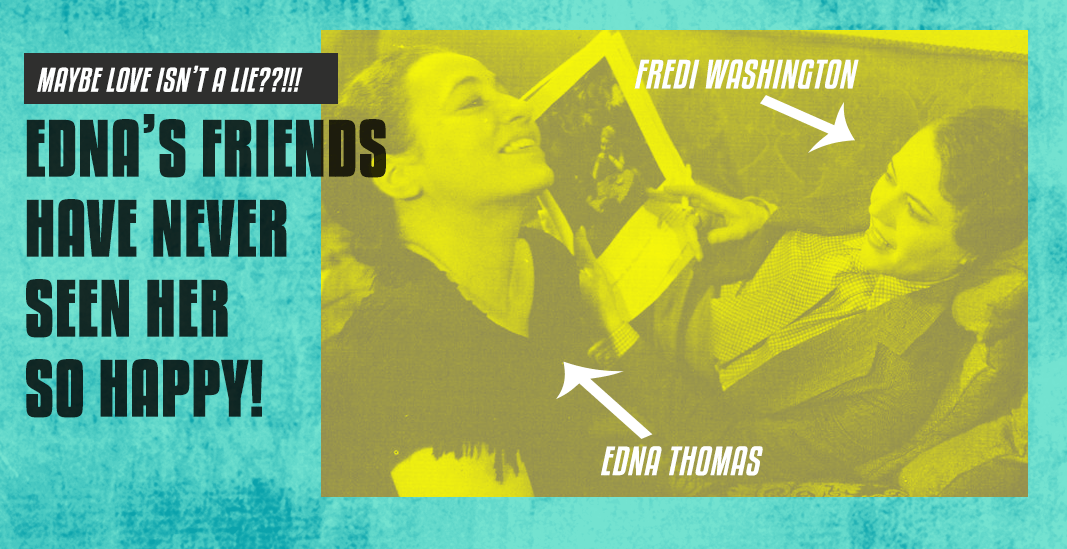 Although Lloyd and Edna, in public, will tell you that Olivia is merely “a houseguest who helps with expenses,” ladies, we here at Autostraddle will continue our devotion to bringing you nothing but the actual truth, no matter who we have to offend to acquire it.

Good news, like a good man, has been had to find during these dark depressive days. We get a little Amelia Earheart here, a little Eleanor Roosevelet’s husband running for president there. But most days it’s hard to resist the urge to submerge our heads in wax bags of ground beef and give up on life altogether, which’s when news like this is a welcome respite from the tragedy and doom of the news cycle.

Know this: Olivia Wyndham and Edna Thomas are madly in love, living in sin, and we’re so here for it.