Welcome to Autostraddle’s book club, where we pick a book and all read it together and then talk about it. This month, due to its crushing relevance, we’re reading The Handmaid’s Tale by Margaret Atwood.

The Handmaid’s Tale is a 1980s nightmare feminist dystopia where white men are in power, reproductive capabilities have slowed, women are forbidden to own property and ranked based on fertility and compliance, queer people are executed, and Offred, the protagonist, is one of a class of women who function as womb outsourcing for Commanders’ wives.

In the New York Times, Atwood writes on what her novel means today:

“Back in 1984, the main premise seemed — even to me — fairly outrageous. Would I be able to persuade readers that the United States had suffered a coup that had transformed an erstwhile liberal democracy into a literal-minded theocratic dictatorship?”

With the US turning into Gilead, the answer is “yes.” (Here’s Atwood at Lit Hub on watching her dystopia come true.) And part of that regime, like any repressive regime, is the control of women and childbirth. 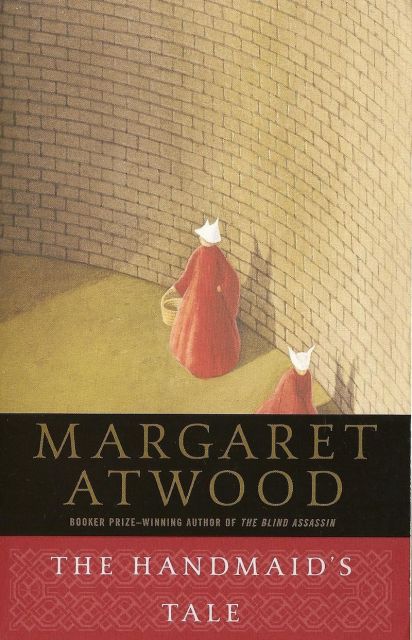 The Handmaid’s Tale by Margaret Atwood

The novel incorporates book burning, public executions, slut shaming, slavery, forced reproduction, concentration camps and essentialism, for starters. It’s an exploration of state control of women’s bodies. And it’s also an exploration of language: its evolution, its threat, its potential for resistance.

Atwood writes that “Offred records her story as best she can; then she hides it, trusting that it may be discovered later, by someone who is free to understand it and share it. This is an act of hope: Every recorded story implies a future reader.” And she concludes:

“In the wake of the recent American election, fears and anxieties proliferate. Basic civil liberties are seen as endangered, along with many of the rights for women won over the past decades, and indeed the past centuries. In this divisive climate, in which hate for many groups seems on the rise and scorn for democratic institutions is being expressed by extremists of all stripes, it is a certainty that someone, somewhere — many, I would guess — are writing down what is happening as they themselves are experiencing it. Or they will remember, and record later, if they can.

Will their messages be suppressed and hidden? Will they be found, centuries later, in an old house, behind a wall?

Let us hope it doesn’t come to that.”

Get The Handmaid’s Tale from your local bookstore, get it from Amazon, borrow it from your library or your Canadian friend who has the copy she read in high school, and we’ll meet back here in a month to talk all about it.