None of it ever panned out, and in the 2010s, when I was in my mid-twenties, financially independent and living on my own — the issue no longer relevant to my life — they gave up, resigning themselves to spending the rest of their days in the U.S.

I’ve often wondered what would have happened to me if they had ever succeeded? That question took on a new urgency in the last few years as I came into my queerness. I know there are robust queer, feminist and activist communities in India. And yet, my family is so conservative. Even in the U.S., my parents never let me leave the house on my own growing up (I didn’t even have my own house key) and insisted that absolutely everything stay within the family. The only resources my sisters and I had to see that life could hold more possibility than the arranged marriages in store for us were libraries and school. In India, they almost certainly would have had far more control over the messages we got from both.

But I have no idea what living in India is actually like. I’m often trying to piece it together based on the bits I gather from the news, the media and my family. The more recent shows and movies I’ve watched, like Four More Shots Please and Lust Stories, with their explicit depictions of sex and discussions of women’s desires shocked my naïve understanding of Indian media, given that everything I had seen before was limited to heavily censored Bollywood movies and family dramas nearly two decades out of date. But they also don’t square with what I see playing out in the lives of my cousins who still live in the country.

Against that backdrop, the new Netflix original series Bombay Begums bridges some of those divides and has shown me what feels like a real glimpse of what that unknowable alternate reality might have been.

Bombay Begums (or “Bombay Queens”) follows five women living in Mumbai. We have Rani Singh Irani (in a comeback role of the acclaimed ’90s Bollywood actress Pooja Bhatt), the new CEO of Royal Bank of Bombay who will pay any price to hold onto the position she has spent her life working toward. Then there’s Fatima Warsi (Shahana Goswami), a rising star at Royal Bank who wants to pursue her ambitions but whose husband expects her to become a stay at home mom after their fifth round of IVF has finally succeeded. Also working at Royal Bank is Ayesha Agrawal (Plabita Borthakur), a young woman from Indore who moved to Mumbai on her own. Laxmi “Lily” Gondhali (Amruta Subhash) is a dancer and sex worker who knows how to hold her own in a world that is constantly trying to deny her dignity; her fate becomes intertwined with the rest when Rani’s stepson, driving drunk, hits Lily’s son. And finally, our old-for-her-years narrator, Shai Irani (Aadhya Anand), Rani’s awkward, teenage stepdaughter who is still grieving her mother’s death while trying to find her place in school.

In many ways, Ayesha’s story is the one that binds them all. In the first episode, Fatima fires her for changing the terms of a business contract without permission, almost costing the bank the deal. Crushed, Ayesha returns to the bedroom she has rented in the city, where she’s under heavy surveillance by the landlord/housekeeper. Responding with forced smiles, she lies and evades her way through a video chat with her parents that felt like it could’ve been lifted from my own life. Her parents are pushing her into an arranged marriage she has no interest in, and her mother admonishes her to “stay away from those shameless girls.”

Eventually, she gets thrown out of the apartment for drinking and smoking, the landlord threatening to tell her parents and exclaiming that “girls just like you” are corrupting influences. With nowhere to go, Ayesha returns to the Royal Bank office with all her possessions, and Rani finds her in the bathroom the next morning. Sympathetic to her struggle — Rani herself having come to Mumbai from Kanpur alone — but also self-serving, Rani takes Ayesha’s idea of investing in marginalized women and gives her another job at the bank leading the first social welfare (or corporate social responsibility) project. But with Lily constantly reminding Rani of the debt she owes her — Lily’s silence about the car crash — Rani names Lily as the first beneficiary of the social welfare funds.

Some days after starting her new position, Ayesha attends an after hours work event and becomes enchanted with the jazz singer performing for the evening, Chitra Parthasarthy. 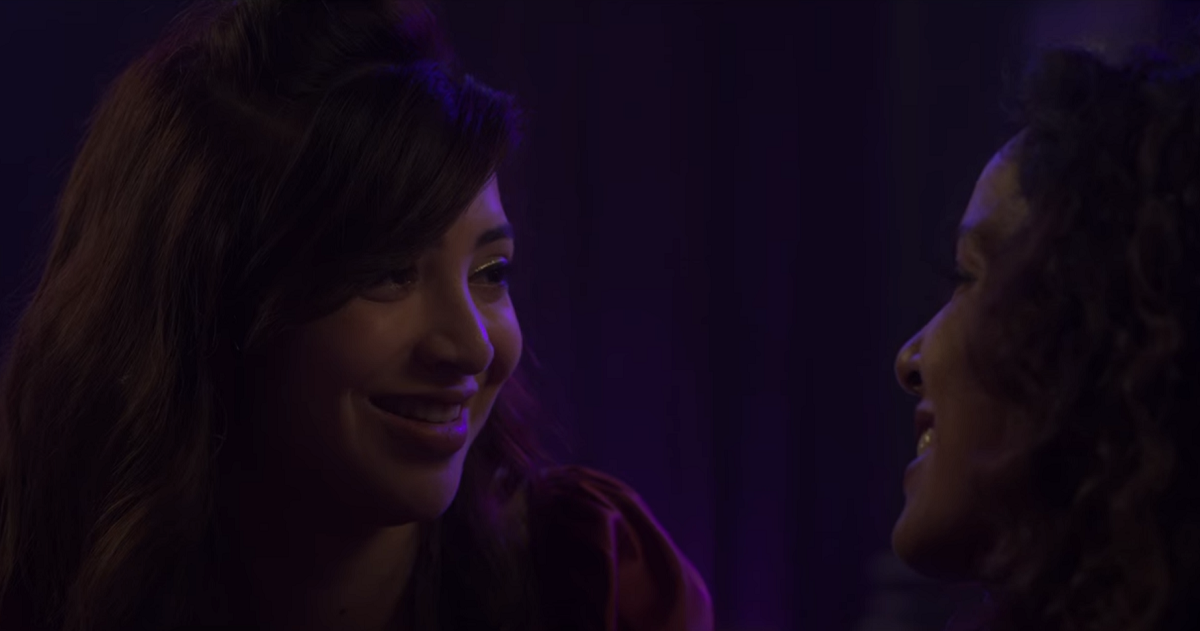 We see Chitra through Ayesha’s eyes, her body swaying effortlessly to the rhythms of her song about living freely in the “city of dreams.” After everyone else has left the bar, Ayesha shares a drink with Chitra, their faces drawing closer and closer but ultimately, Chitra observes to Ayesha, “I think you’re rather drunk.” Ayesha starts following Chitra online, listening to her music even though she doesn’t usually listen to jazz. Alongside her growing obsession with Chitra, Ayesha and Lily start working on Lily’s new business venture funded by Royal Bank, spending more time together and eventually becoming friends.

In one of my favorite scenes, an incredibly powerful moment in a show with no shortage of powerful moments, Lily encourages Ayesha to accept her bisexuality. Ayesha and Lily are celebrating Rani’s approval of their business plan at a bar where Chitra is performing. “Have you ever loved someone and not allowed yourself to? Have you ever stopped yourself?” Ayesha asks.

Lily shares her story about a man she loves who moved to Dubai. Eventually, Lily sweeps her memories aside and turns the conversation back to Ayesha saying, “Forget it, now. My time is done. But now it’s your time. Love. Whoever you’re going to love. With your whole heart.”

Ayesha turns to look at Chitra again and asks, hesitatingly, “Anyone?” as Chitra sings to Ayesha, “We’ve been waiting long. For a different song. What a tragedy.” 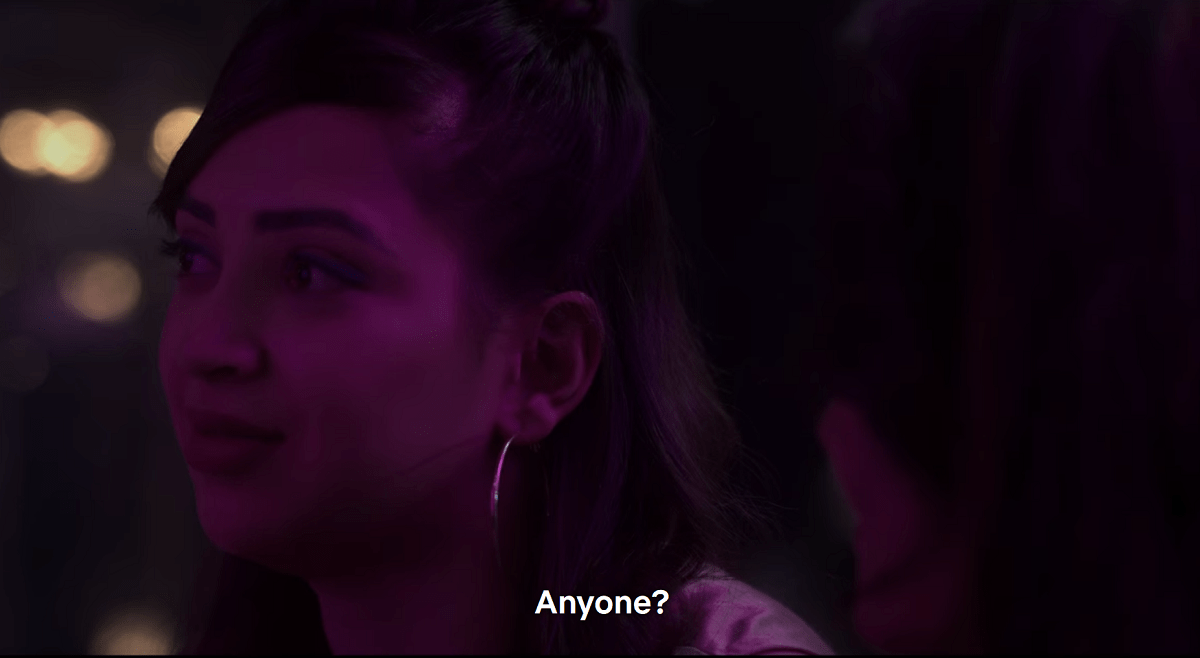 It’s moments like this that I’ve been desperately searching for in South Asian media these past few years. I want to know, I want to see where queer South Asians summon the courage to be themselves from, in a world where coming out is truly a global struggle. Perhaps that’s more of a reflection of me, of my own failings, that I keep looking for that story and feel dissatisfied by narratives that depict queer identity as one that’s readily claimed in South Asian culture. It’s not that I think every queer story has to be a coming out story, but with so few out South Asian celebrities, I’m not convinced that we’ve moved past the point of needing South Asian coming out stories for us to find ourselves in.

Ayesha decides to pursue Chitra — haphazardly, at first: showing up at her apartment, kissing her and immediately running away to head over to her coworker Ron’s apartment, who she then also kisses. Eventually Ayesha and Chitra start casually dating. Throughout the season, Ayesha’s bisexuality is never denied. Her attraction to Chitra and to Ron and her relationships with both are handled with equal sincerity, both inherent parts of who she is and how she loves.

The commonality across Ayesha’s loves, though, is her struggle to find herself and find a place for herself in Mumbai. She faces countless hurdles to renting an apartment as a single woman, the realtor nagging her that her mother can’t attend the housing interviews and, in one interview, being accused of trafficking children. In the interim, she couch surfs — first staying with her ex-boyfriend and his new partner, then Ron and at one point even Chitra, never able to claim a space of her own outside her relationships.

In the middle of all this, she’s sexually assaulted. Acute trauma and all the stigma surrounding assault become yet another set of challenges Ayesha has to navigate. The assault puts Rani, Fatima and Lily to the test, as well, forcing them to confront the limits of the power they have spent their lives trying to secure.

And that, that is what I love about this show. In seemingly every storyline, Bombay Begums is unsparingly honest about the barriers women face and doesn’t shy away from tackling the intersections of sexism with other forms of oppression. What’s more, it depicts people from marginalized communities in India in ways that aren’t steeped in offensive stereotypes. For instance, among Lily’s recurring group of friends is Beauty, a playful trans woman who calls bullshit when she sees it. While the casual representation of trans women as side characters in mainstream Indian media goes back more than half a century, the vast majority of representations are horribly transphobic, and the roles are often given to cis men. In contrast, trans actress Ivanka Das plays the character of Beauty. 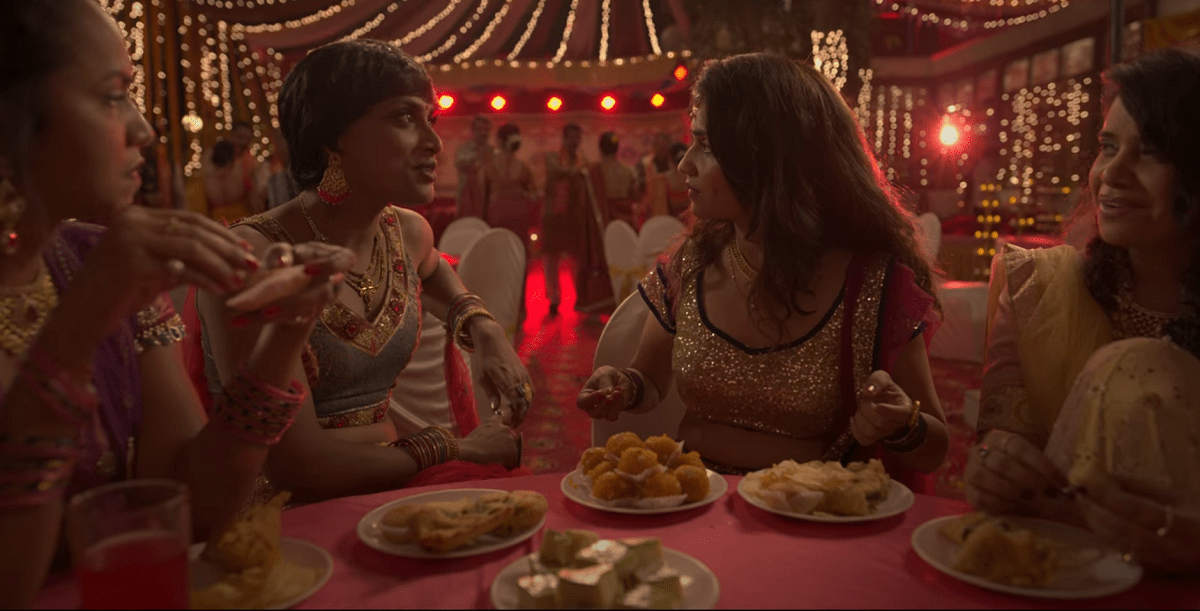 The show has its flaws, though. Shai’s story didn’t catch my interest, and while her narrations can be poignant, heart-wrenching observations, the delivery falls flat at times. I’m also conflicted about the implications of Fatima’s storyline. And the rise in Islamophobia across India is conspicuously absent, though Fatima’s Muslim faith is portrayed openly and respectfully, a representation that’s not insignificant in the country’s current political climate.

In the last few weeks, Bombay Begums has been subject to calls to ban it in India because of its depictions of minors engaging in sex and using drugs and alcohol. It’s unclear what will happen, if the show’s creators will be forced to alter those scenes or what this controversy portends for its renewal.

But I hope there’s a second season. At the end of it all, I still have no idea how accurate Bombay Begums’ portrayal of life as a woman in India is, but its themes and characters resonated with me deeply. With strong performances, beautiful cinematography and compelling music — if you’re looking for a short, thoughtful binge watch, I highly recommend it.

Author’s note 4/8/21: This post was revised after it was pointed out to me that I had misread the religious and ethnic heritages of some of the characters.

Himani is a dabbler of a writer. Her work includes reviews of media centering Asian stories, news and politics, advice and the occasional personal essay. A stickler for privacy, the best way to reach her is by email: himani[at]autostraddle[dot]com.

Himani has written 40 articles for us.