And Weeeeeee’re Back!! How was your holiday? Did you drink so much hot chocolate that marshmallows came out of your eyes? I sure hope that you did. When we left each other in December, Jennifer and Khalil were still on the run from Cutter, Tobias, the rest of the Pierce family and, well, let’s just make this list shorter and say EVERYBODY. They’re on the run from every-damn-body. Everyone’s upset and lots of Pierce family tears were shed and it’s all a hot mess. All caught up? Great!

Well I have some good news for you! Jennifer Pierce has finally come to her senses and returned home! I also have some bad news for you. We are very far from wrapping up this god-awful Khalil centric storyline.

The episode opens with Jennifer and Khalil camping out in his makeshift apartment inside of an abandoned train car. They’re scared, but full of adrenaline, and for right now at least – they are safe. Khalil tries to cheer Jennifer up by reminding her of their happier days of young puppy love, giving her back a necklace from the very beginning of their relationship. They make out a bit, but Jennifer starts to cry. Once upon a time she wanted to lose her virginity to Khalil, but they’ve been through what feels like a thousand wars since then. None of this is what she imagined. Khalil comforts her, and that was the first time I had two simultaneous, horrific thoughts:

Meanwhile the Pierces have circled together and re-committed to their search. Mama Lynn refuses to be left out anymore, rifle gun in tow. Based on Khalil’s cellphone tracking the group breaks up into four quadrants. Lynn ends up at the train yard. She starts calling out Jennifer’s name as the teens scramble to turn off the lights. Her mama senses are tingling though and she lingers, begging through tears for Jennifer to come home.

Her visceral pain finally strikes a chord with stubborn Jennifer. Her face waivers, just a bit, but Khalil sees it. Jennifer knows the truth, running won’t solve their problems. She’s tired of surviving, she wants to live. Khalil knows it’s time for him to let Jennifer out of the mess he’s created, but he’s terrified that returning to Freeland means certain death at Tobias hands. Still, he does the right thing. By the time the Pierces return home, Jennifer is waiting for them on the couch. Khalil is standing beside her in the hallway. 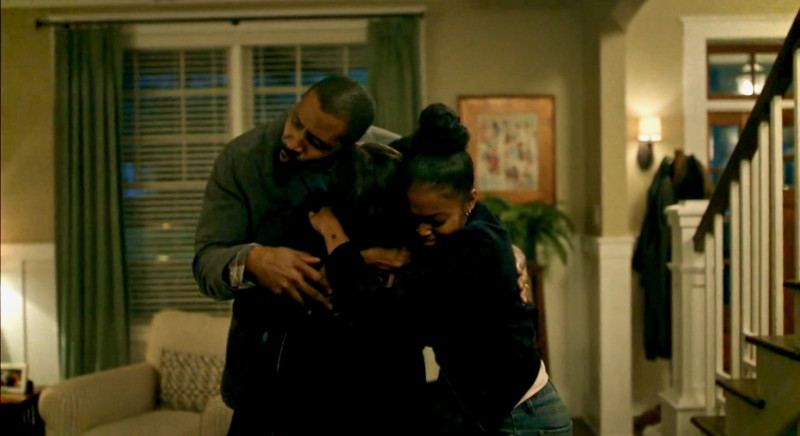 Last night, after Black Lightning aired, I was knuckles deep into my traditional post-episode gossip thread with my fellow TV Team nerd Natalie when she said something so profound I’m still circling around it over 12 hours later: Redemption Comes Through Accountability.

Anyone who’s a regular reader of this column knows that I don’t go easy on Khalil. I’ve been vocal about my concerns that the relationship he’s built with Jennifer this season is abusive. The Black Lightning writers’ room created a character that, just like many teen boys in real life, has no accountability for his actions or care for the ways those actions affect others. Up until this episode, Khalil has been the embodiment of the type of “No Means Yes”, “Unwanted Pursuit is Romantic” mindset that’s a dangerous slippery slope for teenagers to imitate. Then he stood up tall in the Pierces’ kitchen, squared his shoulders, and agreed with Jefferson that the only way forward was to turn himself in to the police. Suddenly the world flipped upside down.

I don’t want to imply that I’m letting Black Lightning off the hook for digging this hole with Khalil to begin with, I’m not. I also don’t want anyone to think that I’ve “gone soft” on Khalil because of the tragedy he faces at the end of the episode, that’s also not true. I think that if we are holding not only the character, but the creators responsible for telling stories that aren’t harmful to young women viewers, then we have to also acknowledge when they work to do better. Khalil owning up to his actions in creating this world of hurt for the Pierces and Jennifer? That’s doing better. Khalil agreeing to do the very hard things necessary to protect her now that he’s put her in danger? That’s doing better. Khalil finally stepping up to the plate and lifting his metaphorical weight, instead of hiding behind or blaming others? DOING BETTER. And that was the second time I thought to myself, oh my god Khalil is going to die this episode. 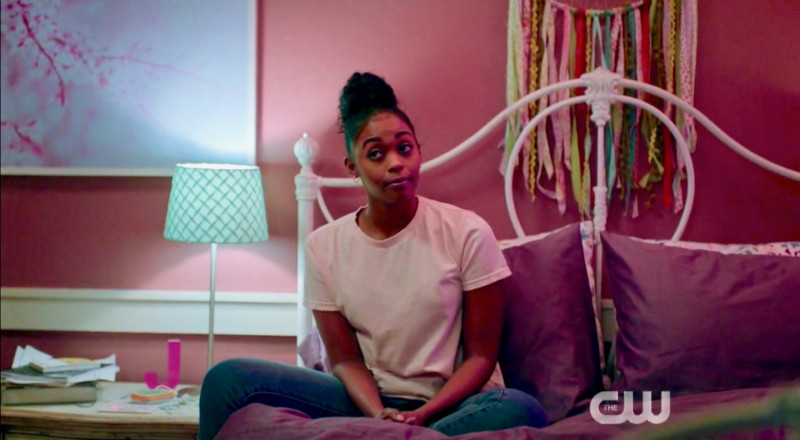 You’ll be glad we had this talk when you’re the only girl in the freshman dorm who can find her clitoris.

So Kahlil agrees to the witness protection switch-off from police as long as he gets to say goodbye to his mother first, a real heartbreaker. Black Lightning and Thunder provide extra security from the rooftops but it doesn’t matter because 100% I’m already watching from behind my sweatshirt. Kahlil is going to die. We all know it. Kahlil is going to die.

Cutter shows up playing a damsel in distress routine to stop the police caravan. There are at least 35 – 50 cops with guns and one kickass assassin… with a knife? But somehow she still slaughters them all? I can’t tell you how, you see, because the camera cut away. I know Cutter is a bad bitch and all, styled right from the cloth of the Greatest Baddie of Them All Rihanna, but this is asking for a lot. If you want me to believe she took down all those cops, I gotta see it. Still, this is what Black Lightning is asking of me on this day, so we push forward.

Khalil ends up back Tobias’ hands (saw that coming), Tobias swiftly goes to murder the boy with his bare hands (sadly, saw that coming too – though I will say that was faaaaar more graphic than I expected or that even I think Khalil deserved! The violence on Black Lightning this season continues to travel into unnecessary realms). Then Tobias leaves Cutter and his new techno-wiz, Todd, to clean up the mess.

I assume Tobias thought that bloodily ripping out Khalil’s spine would kill him, or at the very least Cutter would finish the job, but instead she leaves him on the steps of Rev. Holt’s church. Crawling on the concrete in unspeakable agony, but very much alive!

I’ll see you all of you loves next week, when Khalil lives and Jennifer cries some more and maybe if I’m lucky Anissa will speak more than 6 lines! Anything is possible in this brave new 2019 world. Oh, and while I have your eyes, have you read up on The Masters of Disasters yet? Because now is definitely the time to do that.