In the latest episode of the CW’s show Arrow, “Heir to the Demon,” one of the main characters, Sara Lance, also known as the superhero Black Canary, came out as queer. She’s the first superhero from one of the two major companies (DC and Marvel) to be visibly and explicitly queer on either television or film. If you’ve never seen the show Arrow, it’s about the DC Comics super hero Green Arrow and his friends, one of whom is Sara Lance, played by Caity Lotz. While it’s popular for fans to interpret the character Black Canary as queer in the comics, it’s never been stated in canon that she has ever had a relationship with or interest in women, so this is pretty big news for the character and for the superhero genre in general. 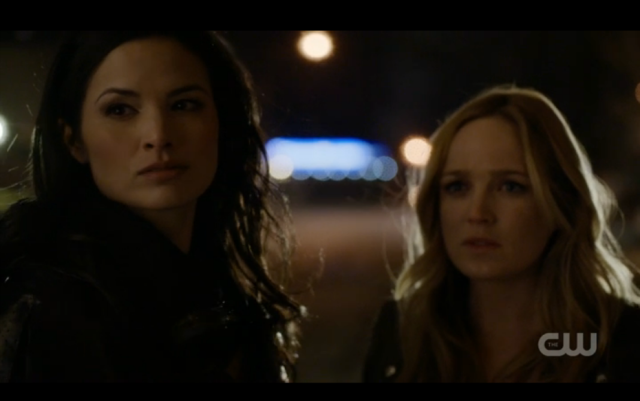 Nyssa and Sara, AKA Black Canary

The way her queerness was revealed is a little convoluted, but let me try to explain it. Sara Lance was on a boat that sank and was “rescued” by a group known as the League of Assassins. They trained her to be an assassin, but she eventually escaped, something that is not really allowed and is currently back in her hometown of Starling City. This episode featured a character named Nyssa al Ghul (played by Katrina Law), the titular Heir to the Demon, daughter of Ras al Ghul, the leader of the League of Assassins.  The episode starts with Nyssa entering the country and fighting off some security guards to let us know that she’s trouble. Later, Sara is in a bar with her dad telling him that the League won’t rest until it’s captured her and brought her back. By putting two and two together, we’re able to figure out that that’s what Nyssa is here to do. The two then bump into each other in a dark alley after a very dramatic entrance by Nyssa and proceed to immediately make out. Green Arrow is creepily watching them until Nyssa calls him out of the shadows. 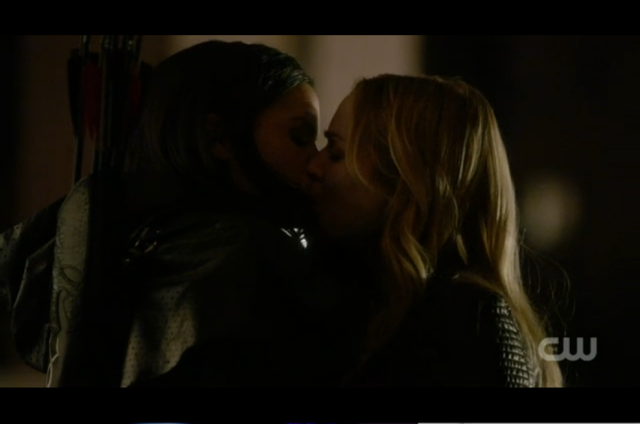 The two then go for a moonlight stroll by the side of the river where Nyssa implores Sarah to come back home with her. Obviously, a large part of it is because of League of Assassins business, but as Sara points out, Nyssa went there because of her feelings for her. Sara even tells Nyssa that she loved her and the two look very devastated that they can’t be together because Nyssa’s father is a mass murdering assassin king. They clearly have a complicated relationship. Based on their dialogue, it seems like when Sara escaped, the two were still in a relationship and Nyssa feels very betrayed that Sara left her without saying goodbye. It’s also definitely not a good idea to date the daughter of the man who’s holding you captive and forcing you to become a trained killer, but, hey, love is strange.

Nyssa then goes to extreme measures to get Sara back, kidnapping her mom from the hospital. Sara tries to stop her, but she’s unsuccessful and she realizes that she’ll have to tell her dad what’s going on. When she tells her dad that Nyssa has kidnapped her mom, she also tells him that Nyssa did it not to get her to come back to the League of Assassins, but to get Sara to come back to her. At first Sara’s dad seems a little surprised, but they don’t really have time to talk about it right then. Sara and her dad later have a heart to heart where she asks if he’s upset that she was in a relationship with a woman, and he says “honestly I’m just happy that you had someone who cared for you.” It’s a nice sentiment, but also, the woman she was in a relationship with is pretty much second in command of an army of assassins, so, she’s not exactly dating material. 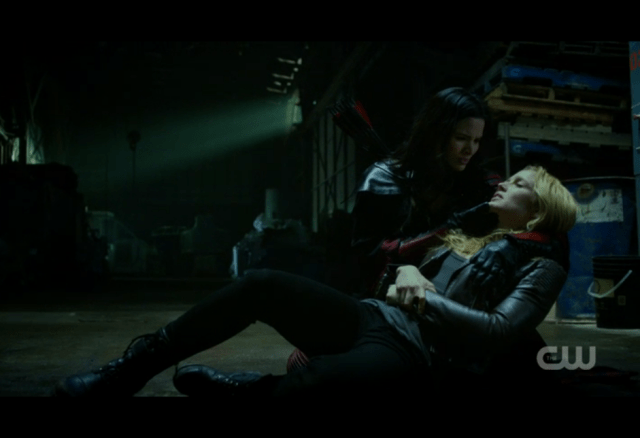 Sara comes to rescue her mother, but instead of going back to the League with Nyssa, she takes some poison and is about to die in Nyssa’s arms right before Green Arrow comes in and saves the day. Nyssa is again devastated that she can’t be with Sara, but she knows when to let go and says, “In the name of Ras al Ghul, I release you” before disappearing. At the end of the episode Sara starts making out with Green Arrow. On one hand, boo, another queer woman on TV seemingly ending up with a man! On the other hand, yay, bisexual representation! Still, I’m holding out hope for the sake of representation that Sara can someday soon meet a nice queer super heroine to settle down with so that we can continue to discuss her queerness without fans and writers ignoring it (obviously, ending up with a male partner wouldn’t make her less queer).

DC does have some precedent showing queer characters on its TV shows. The DC Animated Universe gave us characters like Renee Montoya, Maggie Sawyer and Richie Foley, who are all canonically queer but either never or barely got to show it, and of course featured Harley Quinn and Poison Ivy who definitely seemed to be more than just friends. However, Black Canary is arguably a higher profile character in the comics than any of them and a more major character on her show. Black Canary is often a member of the Justice League, she’s one of the core members of the Birds of Prey, and later this year she’ll be starring in a comic alongside fellow fishnet wearing super heroine Zatanna. On the Marvel side of things, Mystique from the X-Men comics has been in several movies and cartoons and her sometimes lover Destiny was also a character in the TV show X-Men: Evolution. Also, the show Agents of Shield recently introduced the character Victoria Hand (played by out actress Saffron Burroughs), who in the comics is queer, but that part of her hasn’t come up on the show yet. 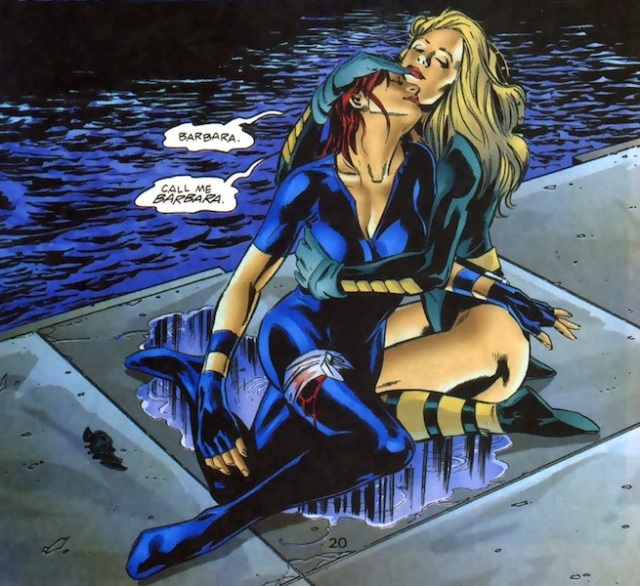 As I said before, Black Canary has never been stated as being queer in the comics, but former Birds of Prey writer Gail Simone once wrote on her tumblr that in an issue where Black Canary was interestingly enough, fighting Talia al Ghul, another daughter of Ras al Ghul, there was supposed to be a scene where Black Canary says Talia’s wiles won’t work on her because she’s “70% hetero.” Problematic wording aside, this would have confirmed that a pretty high profile female superhero was queer, but unfortunately a printing error was made and a non-corrected version of the comic with different dialogue was sent out instead. Some things from the show have already made the jump to the comics, such as John Diggle, a character invented for TV who is now a character in the comics, so hopefully this development will make a similar leap and we can celebrate having another queer lady in comics to read about.