Something Paul Verhoeven and I have in common is that we both love boobs. Something we don’t have in common is how much lesbian sex we’ve had. With his latest, Benedetta, we were promised another of his delicious trashy masterpieces — instead he reveals the limits of his gaze.

Benedetta is based on the life of Benedetta Carlini, a 17th century lesbian nun and mystic (played by an icy Virginie Efira). From a young age, Benedetta has a spirituality deeper — and more sexual — than her fellow novices. She’s stubborn and brave and takes the whole “married to Jesus” thing very literally. She even begins having visions of her holy husband and it seems like she’s ready to ascend to the highest level of sainthood. Enter Bartolemea (Daphne Patakia) — the convent’s latest novice who arrives less out of religious duty and more out of desperation. 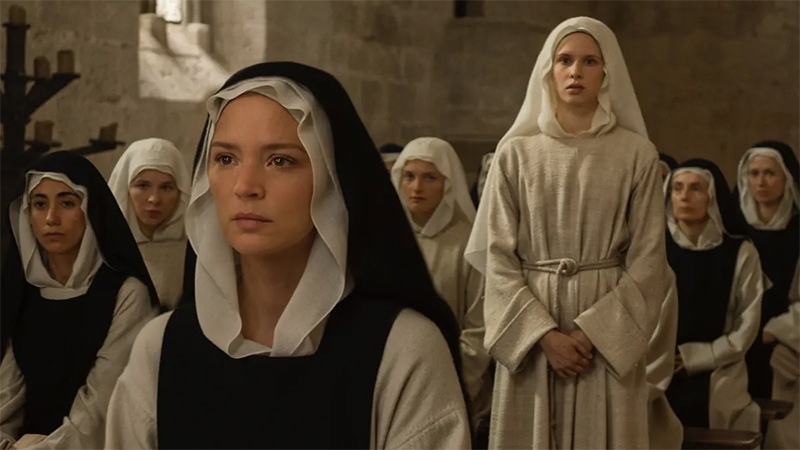 Verhoeven’s work feels like a relief in a landscape of queer cinema where restraint and assimilation are most often celebrated. But that’s only the case if your lesbian cinema viewing is limited to the two or three movies that trended that year on Twitter. The last decade alone has brought us works like Mommy is Coming, Holy Trinity, and The Daughters of Fire, movies with kinky sex from an explicitly queer perspective. Not to mention all the queer-created porn readily available all over the internet. Verhoeven’s offering ends up feeling like a relic of a bygone era — one where the only people allowed to film lesbian sex were straight cis dudes ignorant to the most exciting ways we fuck.

With its campy focus on faith and lust, Catholic power structures and lesbian nuns, Benedetta reminded me of a film I like far more — Maggie Betts’ 2017 debut, Novitiate. Reviews of that critiqued the performances for being over-the-top and the film as a whole for being overwrought. Why are straight men like Verhoeven the only filmmakers afforded a trust in their stylization? Both films are pointed in their tone. Both films know exactly what they’re doing. But as far as I’m concerned, Novitiate does it better. 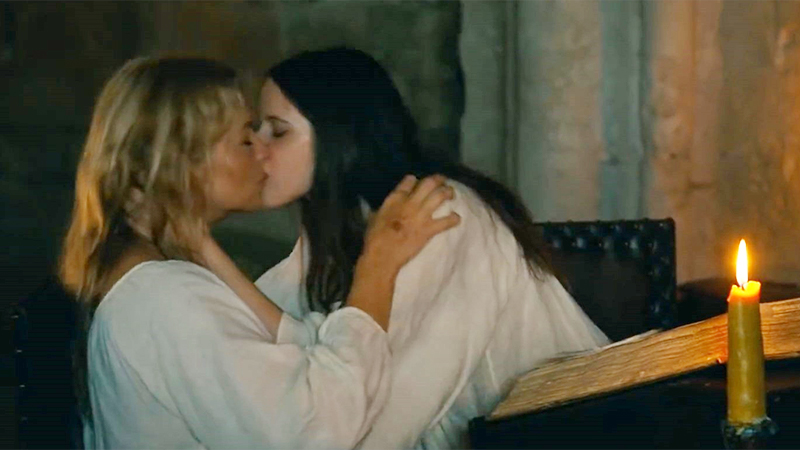 Verhoeven has always been just as interested in violence as he is sex. And while Benedetta disappointed me as a sexploitation movie, I found plenty of interest in its brutality. The most compelling moment between Benedetta and Bartolemea aren’t their sex scenes, but when Ben instructs Bart to stick her hand in boiling water. The games of manipulation Benedetta plays with Bartolomea, The Abbess (a standout performance from Charlotte Rampling), and everyone else in the town of Pescia are where the film is the most interesting. As the plot gets more consumed with the plague, it begins to feel like an accidental allegory for our current moment. Benedetta had its release delayed due to the pandemic and now it couldn’t feel more well-timed.

If you go into Benedetta wanting sacrilege, you will technically find it. But if you’re queer, sacrilege is nothing new. I think a lot of us have done things that could shock Verhoeven more than he can shock us. I just wish we got to put those things on bigger screens so we could really incite some protests.