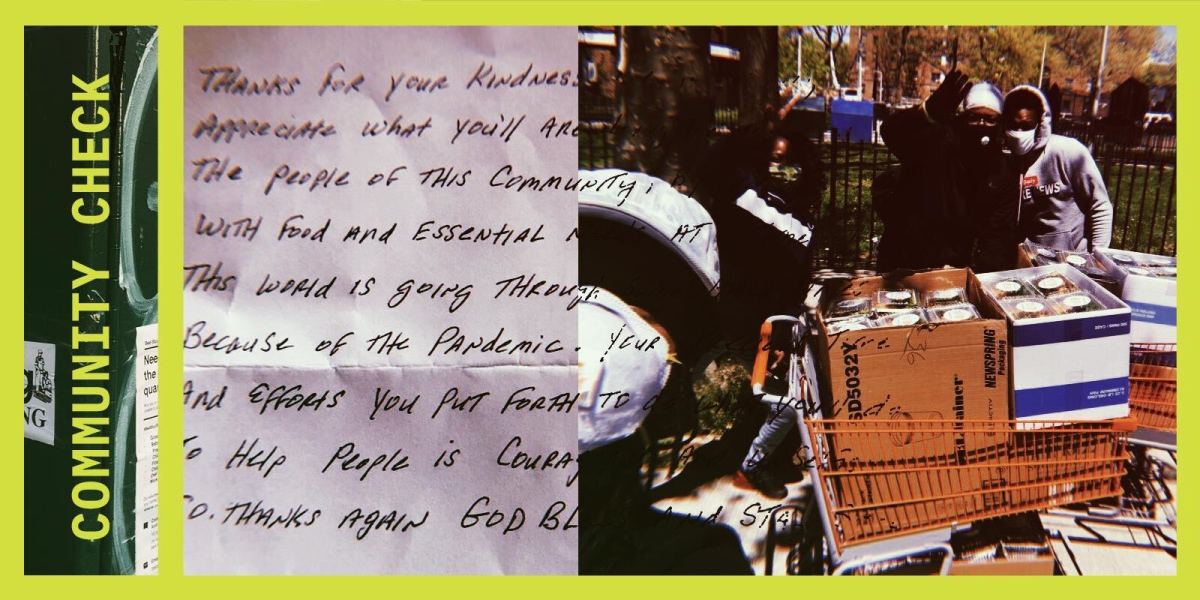 What became Bed-Stuy Strong began as a spiral of anxiety and rage. On March 12 I was reading the news about the coronavirus, and reckoning with the possibility that New York, where I live, might be about fourteen days behind Italy, which was then under full lockdown. A few years ago I had determined to never again let the ineptitude and cruelty of the current administration shock me. No, I did not expect much of the U.S. to respond to the burgeoning pandemic humanely or well. To say the least. I thought of K, my next-door neighbor whom I’m especially fond of, who is not in great health, and wondered if he would be okay. Two thoughts danced inelegantly around my brain, bumping up against its furniture. Nobody may come to help us in time; we are all we’ve got. We need to organize, quickly, online, and geographically.

After looking to see if what I wanted existed already, I mapped out different ideas, sketching them out on legal pad: a series of connected private Facebook groups, branching WhatsApp phone trees, feeling increasingly unsatisfied, and then it hit me. Housing a neighborhood-based network on the messaging app Slack would work well, at least as a start, and if it made sense to, we could set up a phone number for neighbors without reliable Internet access. I built out the Slack infrastructure in about forty-five minutes, with lighthearted channels like #pictures_of_pets, as well as channels for people to share what they needed or wanted to organize around. I made a quick how-to resource in case other people might want to do this for their own neighborhoods.

Staring at the empty Slack, I felt a wild throb of preemptive embarrassment: what if no one joined, what if people joined and then were awful to each other. I texted my friend N these fears, and he very kindly told me to stop being a chump. I ran out and put a note on my neighbor K’s door, asking him to call me if he needed anything. My partner and I printed out twenty pages of flyers, cut them up into quartersheets, and then walked around my neighborhood of Bed-Stuy, Brooklyn, putting them up on street corners and bodega doors.

This was March 14, right around when most people began to voluntarily try to stay at home, exactly one week before shelter in place was announced in New York. The flyers had a join link. By the time I got home, sixteen new people were in the network. By the end of the day, sixty-five. Neighbors began introducing themselves, expressing gratitude and relief that this existed. Again and again people said, here are my cross streets, this is what I do, I want to help. The next day eighty people joined, the day after a hundred fifty, and Bed-Stuy Strong was born.

The we of Bed-Stuy Strong is what electrified and astonished me, and continues to. We: my neighbors, my fellow organizers, the eventual thousands of ordinary people who raised a hand and said, hey, I want to do something. We made a phone number on day two. We had an organizing meeting on Zoom: day four. We made a new bilingual flyer and thirty volunteers papered the neighborhood with it: day six. We set up a rudimentary system: a neighbor would leave a message on the hotline, a member would call them back and find out what they needed, and post it on Slack for other neighbors to respond to, or offer to contribute money too. Most neighbors calling needed groceries – they were elders or immunocompromised, they couldn’t leave the house or they had been laid off and had no funds. We began to receive thirty to fifty calls each day. We set up a community fund to buy those groceries, stitching together cash apps like Venmo and Paypal and Zelle to a personal bank account: that, I think, was day eleven. Some of our members who had backgrounds in tech raised their hands to offer to try to build a more sophisticated system so we could help more people and faster, given that hunger is a pretty immediate need. We put it in motion. By the end of the first two weeks over a thousand people had joined. This was terrifying, and exhilarating too.

Mutual aid, that is, reciprocal intra-community help and support expressed in a spirit of solidarity, is the heart of Bed-Stuy Strong, which today is a multiracial network of three thousand people from all walks of life, from grocery store clerks to software engineers to artists. In our first nine weeks of existence, we have supported over five thousand neighbors with a week of groceries delivered to their door, creating an estimated 100,000 meals. It’s absolutely wild to me. It demonstrates the power of emergent networks and of organizing, and the reality that most people are hungry to be decent in an indecent time.

Many of these neighbors pay it forward in some way; some join Bed-Stuy Strong and volunteer to run other deliveries, some offer contributions to the community as they can. The network has had multiple other initiatives its members are working on, from getting folks to complete the census (Bed-Stuy was undercounted by an estimated 49% in 2010) to providing masks to healthcare workers to helping coordinate supplies for our neighbors who don’t have homes.

Besides solidarity, we articulated other guiding principles for our work together: accountability, resourcefulness, care, imaginative thinking, joy, and crucially, humility. We know other community organizations have been doing the work for a long time. We were, and are, a volunteer-run network of ordinary people, and thus have to own our finiteness. We were, and have to be, part of a great patchwork of efforts to take care of our communities during a calamitous global crisis that has reverberated along long standing faultlines of structural racism, economic inequality, and healthcare disparities. We saw, and see, any worthwhile thing we accomplish as a small part of the long legacy of joined hands here in Central Brooklyn. This is, after all, where the Black Panther Party set up a free medical clinic, abolitionists worked to get enslaved people to freedom, and people who were marginalized by the state in a variety of ways have looked out for each other, and shown up for each other, for a very long time.

It’s wild how many of us are queer, G, one of my fellow organizers, messaged me the other day, I wonder why that is. It seemed pretty straightforward to me. Queers, Black people, brown people, immigrants – all have had to learn to take care of our own in this country. Any group of people relegated to the margins has. Mutual aid organizing is a codification of that care, and an additional assertion: you matter. Whatever they tell you, whatever the system tells you, you matter, we matter, you matter to me.

If you would like to support Bed-Stuy Strong, please go to ioby.org/bedstuystrong or Venmo @bedstuystrong. Every dollar will end up helping fill the fridge of a neighbor in need.