As a person who often prefers not to be perceived, wearing clothing with words on it can be a fraught affair, but when it comes to my beloved Autostraddle merch, I am fairly confident that the majority of the word thinks I am simply out here supporting my favorite bands!!! Maybe Lazy Femmes isn’t a band, but it could be, you know what I mean? Which brings me to today’s topic: all of the imaginary bands I am supporting when I wear my Autostraddle merch which BY THE WAY you can get right now in the Autostraddle Store for 15% off with code GOODBYE15 (25% off with a special code for A+ Members, there’s a email all about it in your inbox!). 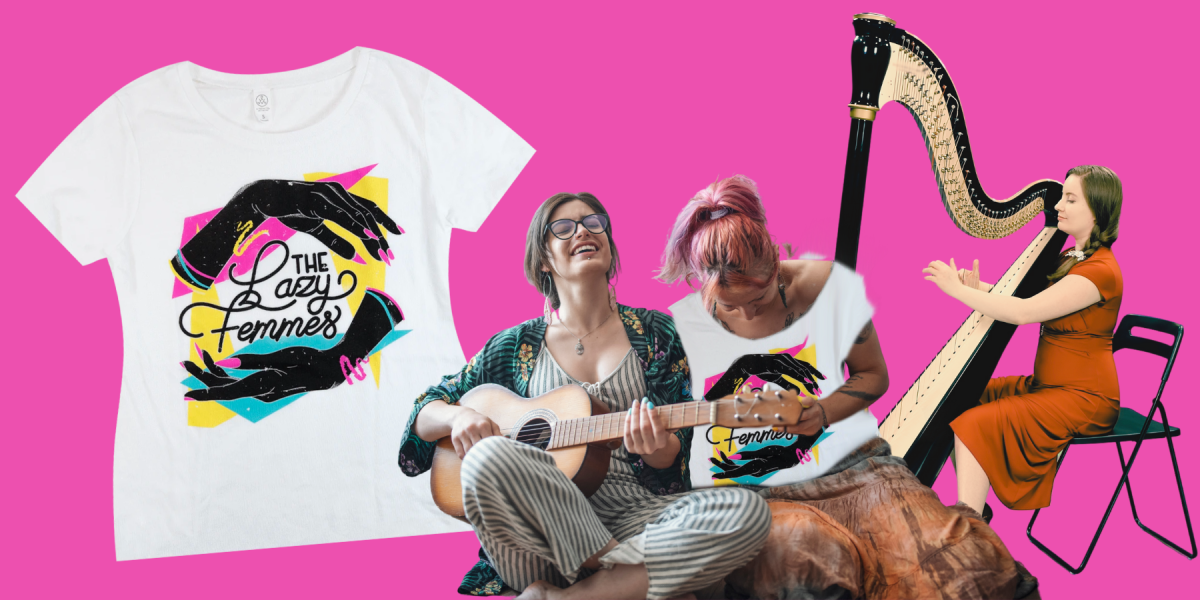 The Lazy Femmes have embraced the Living Room Tour spirit of so many indie artists, with one key exception: rather than setting up shows the homes of fans all over the nation, they simply rotate between the band members’ own living rooms, all within a 5-block radius of one another. Harps are heavy! Their signature chaise lounges are as memorable as their syrupy, cabaret-appropriate vocals. 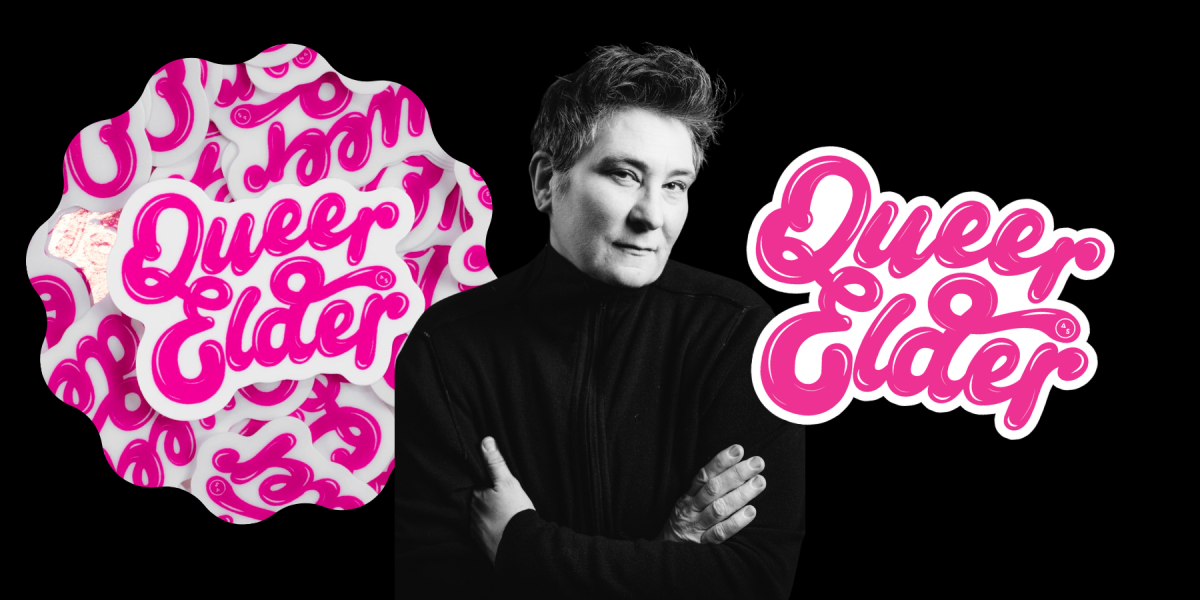 This pop-up band has a rotating cast of around 25 musical legends who perform the same ten lesbian classics at every 6pm show, which take place in chill venues with ear-friendly acoustics and childcare. Every venue offers drink menus that are 50% cocktails and 50% club soda with lime. A recent performance in Berkeley found Joan Armatrading, Tracy Chapman and kd Lang singing “This Land is Your Land” to a crowd of tearful, comfortably dressed queer humans basking in “the power of community.” 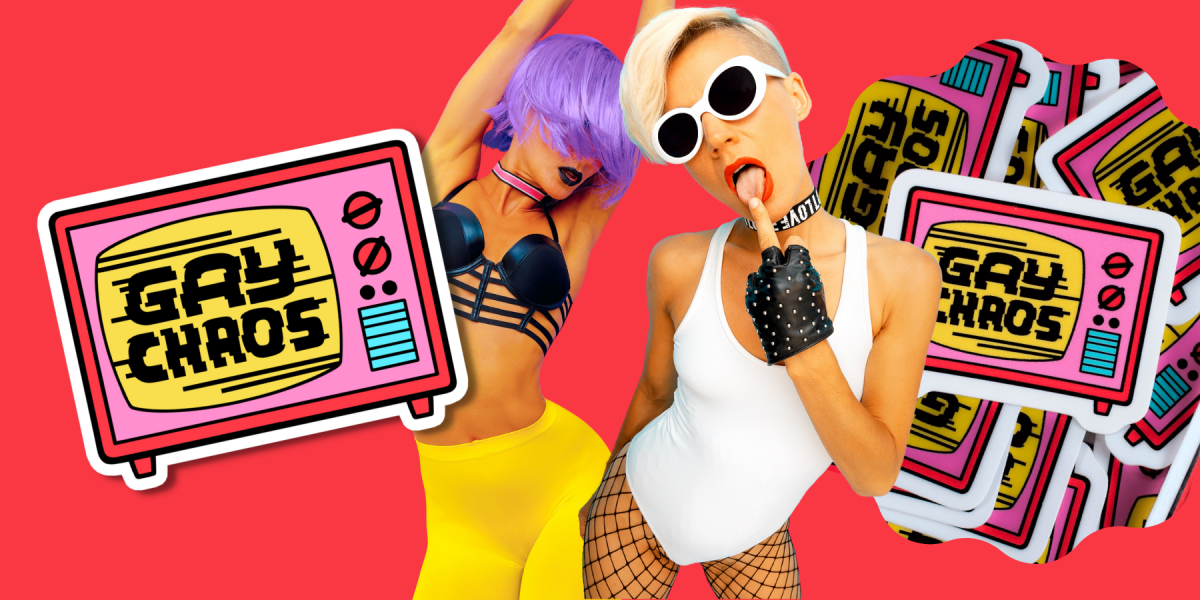 Eddy and Becky, best friends who fucked on OnlyFans to earn cash to fund their first album, started out with bathtub ukelele covers and careening, desperate ballads that made rock bottom sound like the only true feeling on the planet. They were lesbian folk-rock music, but make it chaotic, like Melissa Etheridge on amphetamines. Everything is blood and fire, everything has only ever been blood and fire. As the band evolved and the girls grew up, they transitioned into harder rock, got a full band of musicians with erratic sleep schedules, bad relationships with their parents and unmedicated ADHD and made more space to scream into the void. Notorious for cancelling shows last-minute, surprise-dropping new tracks at midnight and hanging out with fans until 3AM making increasingly ill-advised decisions, being a Gay Chaos fan is like navigating a trigger-rigged obstacle course, but the reward of your endurance can be so sweet.

(ETA: It has come to our attention that there actually is an actual band called Dyke Drama, a solo project from trans punk musician Sadie Switchblade. You can listen to Dyke Drama’s 2015 digital album here.) 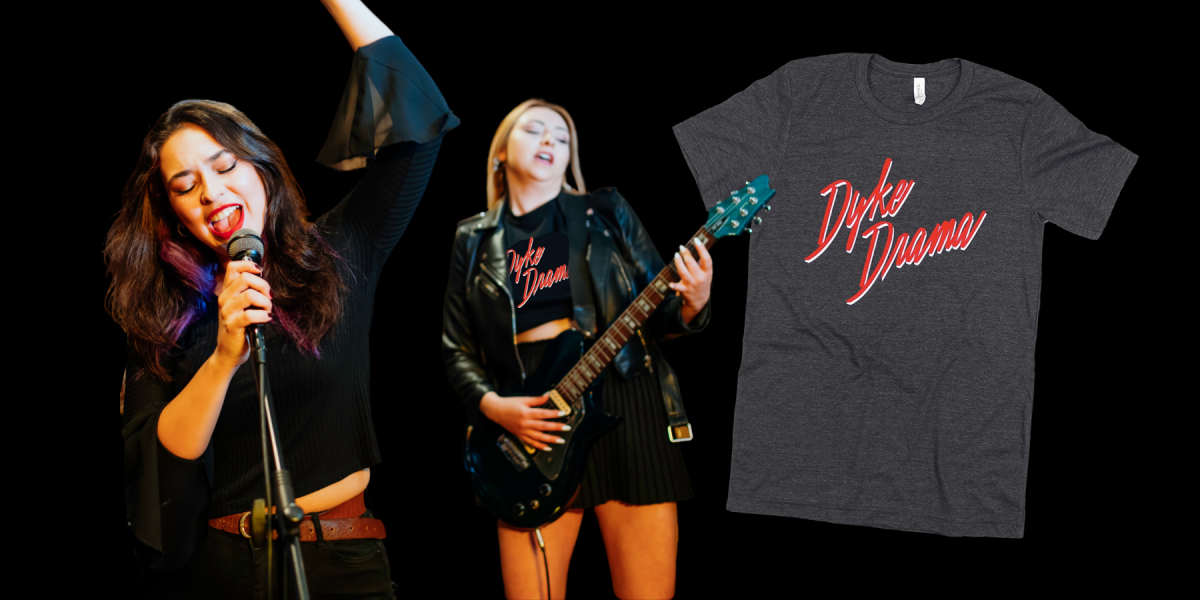 This group landed on the national radar this summer with their unhinged mash-up of Tayor Swift’s Bad Blood & Olivia Rodrigo’s “good 4 u” but we already knew about them. We knew about the legendary breakup between Kimberlee (bass) and Aiden (lead vocals), we’ve seen the clip from the Mercury Lounge where Kimberlee threw a vodka-tonic at Aiden mid-performance and Aiden didn’t even flinch, just jerked her head slightly to flip those now-sticky bangs out of her face and kept singing. How Kimberlee’s new girlfriend Devyn replaced Aiden for their small-bar tour of 2019, singing all those heartbreak songs Kimberlee wrote about Aiden. How Aiden went solo, Kimberlee and Devyn got married in a small private backyard ceremony during quarantine, Aiden’s new Canadian girlfriend had an actual baby and they got married in a medium-sized private backyard ceremony and somehow all that marriage made their relationship as a band possible again and now they are better than ever? And they did that fucking mashup? It’s a soap opera… but it’s a band. 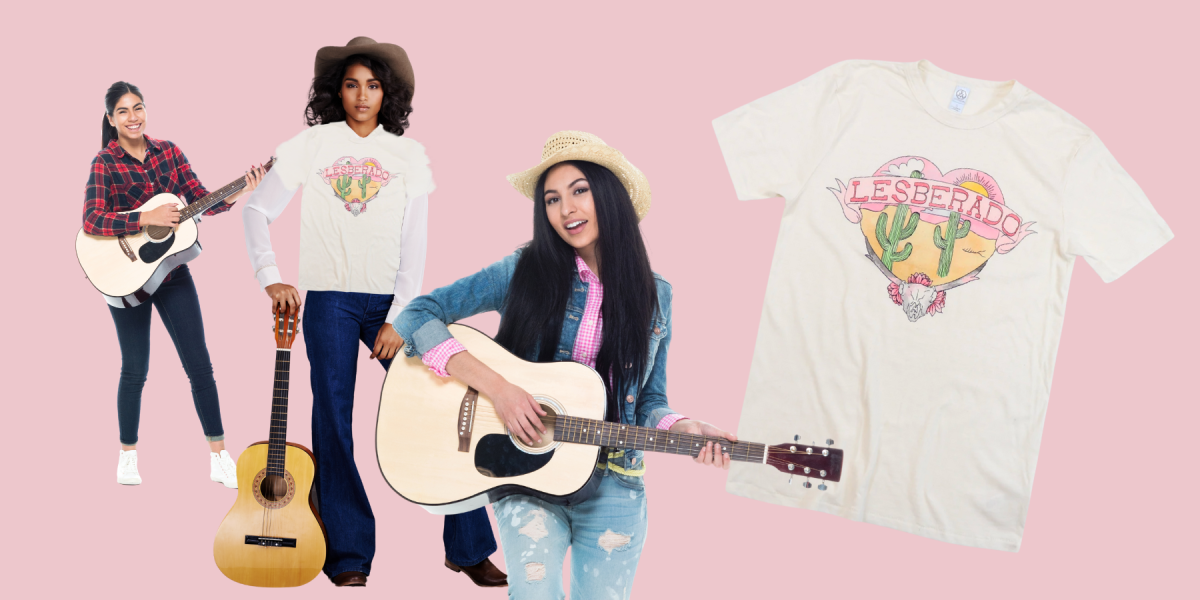 Country music has long been dominated by conservative straight white people, but Lesberado — a band from El Paso consisting of two sisters and their wives — is changing all that. Infusing Tejano traditions into country with no-bullshit lyrics that are heavier on hope than your average Nashville act, it’s hard to hear a Lesberado song and not want to roll your windows down and sing really loud. They had a big summer: opening for the Dixie Chicks, recording a single with Rick Trevino. Since going viral on TikTok with “Is That Your Shirt Or My Shirt?” — their ode to their own successful marriages and life on the road — this tee has exploded in popularity as a frequent presence in the song’s viral dance moves. 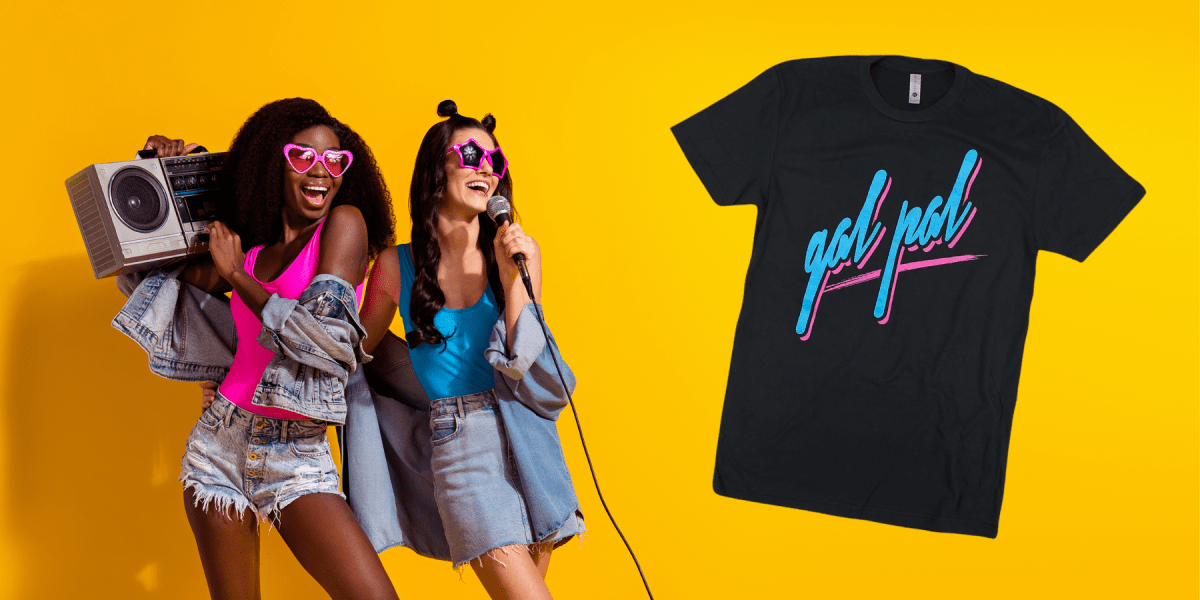 Addictive, vapid pop from Lena and Julia, two fresh-faced teenage girls who are better dancers than singers. We know we should know better but it’s hard to look away from their butch backup dancers flipping them around the stage like silver dollar pancakes. 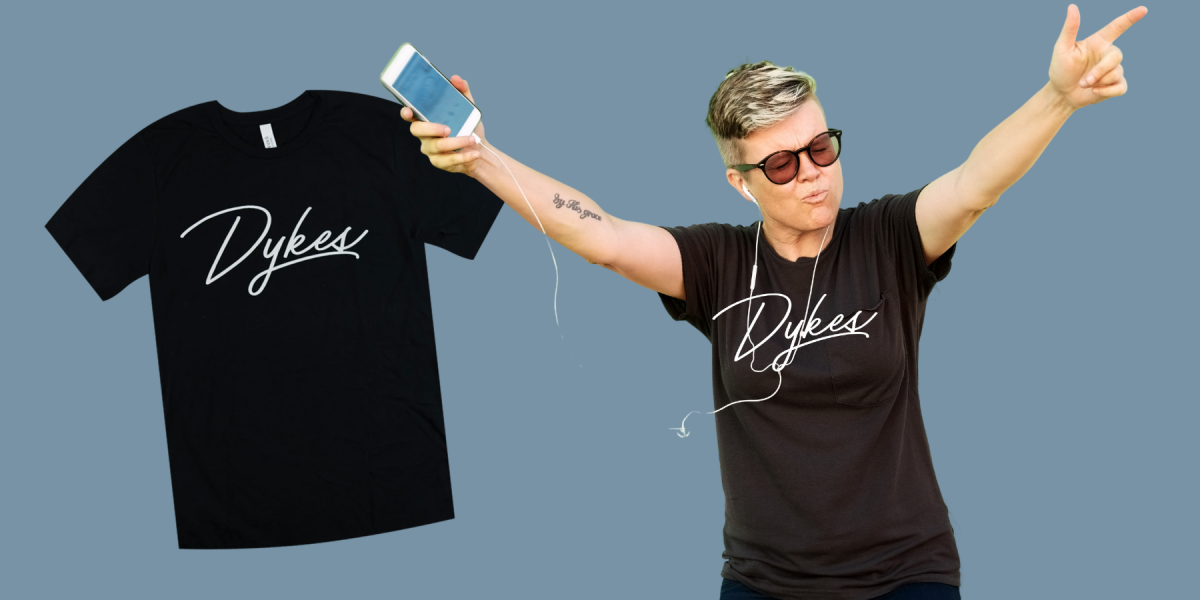 This vintage tee pays tribute to the short-lived band thrown together by Aiden following their breakup with Kimberlee and departure from “Dyke Drama.” The joke is that it was really just Aiden in the band, but Dykes is a plural, even though there is just one Dyke? Anyhow the music was fine. 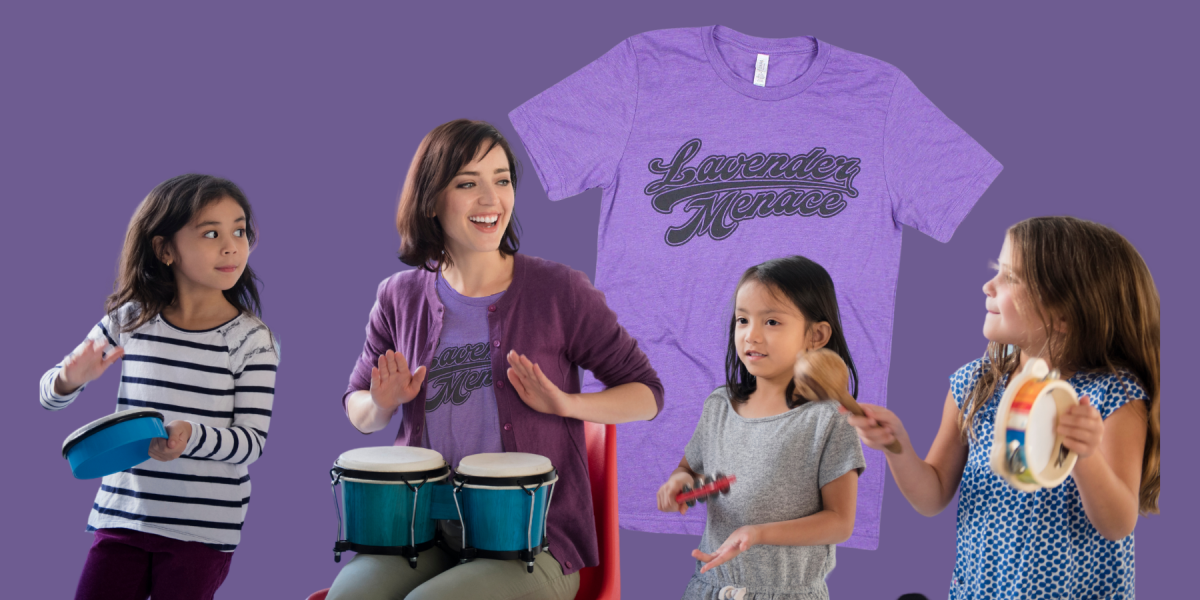 The true deep cut of my band merch collection is this children’s folk music ensemble of three women with sensible haircuts who are best known for their songs “Heather Has Three Mommies, Actually” and “Gay B Cs,” which have been the subject of myriad condemnations on Fox News following a series of performances in children’s libraries in the general vicinity of the band’s home base in Bloomington, Indiana. 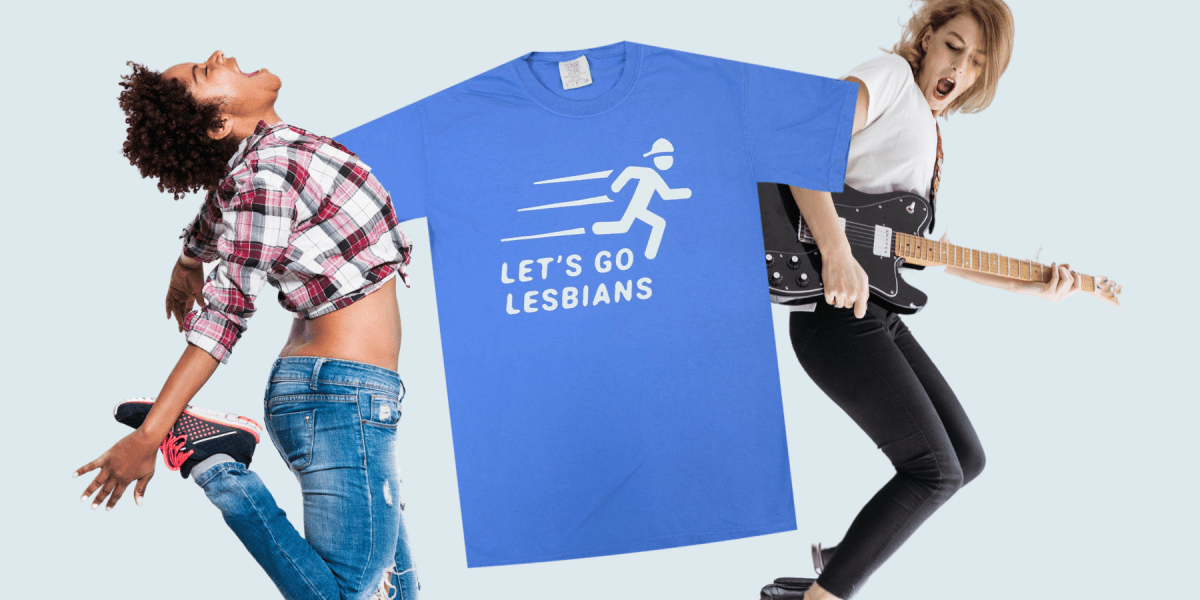 I love a band who makes you wanna jump up and down in a crowd of sweaty baby gays who grew up on Panic at the Disco you know what I mean? Let’s go lesbians!!!!!!!!! 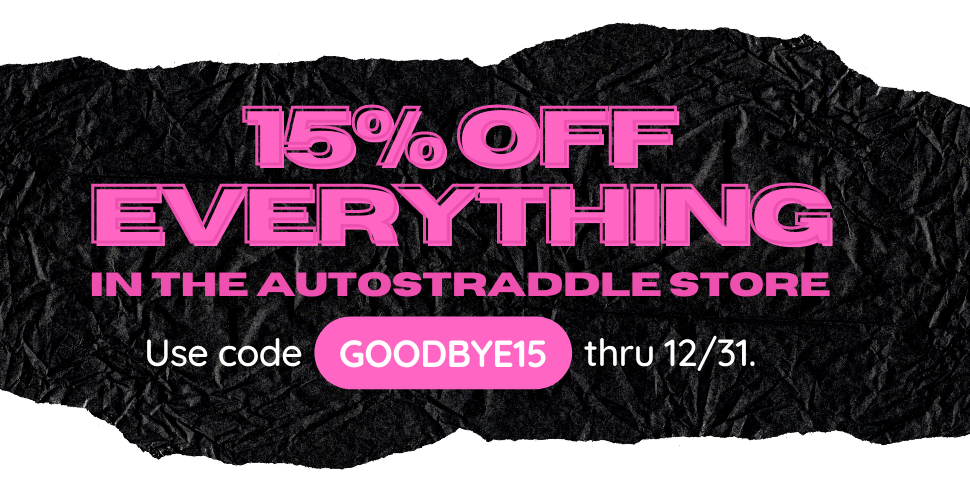 Use Code GOODBYE15 for 15% Off Everything thru December 31, 2021 in the Autostraddle Store.