In the eight years I’ve been a lesbian TV critic, I’ve never seen anything like the response to Lexa’s death on The 100. As I noted in this week’s Pop Culture Fix, in a matter of three short weeks, The 100‘s queer fandom has raised an astronomical amount of money for The Trevor Project and, through broad and relentless social media activism, forced mainstream media outlets to acknowledge the larger cultural ramifications of the ubiquitous Bury Your Gays trope for the first time ever. That pressure even coerced an apology out of The 100‘s showrunner, Jason Rothenberg, yesterday afternoon.

Riese’s overwhelming list of 148 dead lesbian and bisexual TV characters has been instrumental in driving home the frustration and helplessness queer women feel when we’re subjected to this trope. As her list spread around the internet, so did the pleas from our readers to dig even deeper and provide more context and stats about Bury Your Gays, so, with the help of TV Intern Karly, that’s what I’ve spent the last many sleepless nights doing.

To make it onto the infographic below, a character had to meet two requirements: 1) She had to be on more than one episode of a show, and 2) the show had to be available to American TV audiences, even if it wasn’t produced in the United States. (Lost Girl, for example, came to U.S. TV via Syfy and Skins did the same through BBC America.) It took weeks to compile all of this data (years, really, because more than half of it is just stored in my brain), and we didn’t have the time or resources to dig into the full canon of international TV. Those two qualifications account for the differences between Riese’s list (which includes all characters, including single-episode ones, from every country) and this one.

I’ve been beating this drum for almost a decade and I’m going to keep on beating it until I am shot through the eyeball with a stray arrow. Story is, in the words of the late great Alan Rickman, an ancient need. We need it like we need food and water, we need it like we need to breathe. Just like early explorers stitched together stars to make constellations out of the night sky, humans are constantly grappling for unrelated points of light to make stories out of our own lives. Stories guide us, they comfort us, they inform our understanding of who we are and where we belong in the world. Stories give us a safe space to explore every facet of our identities, and to engage with the unknown and render it a little less scary.

Stories exist in imaginary worlds but they are consumed in the real world, where, just this week, North Carolina passed sweeping and unprecedented anti-LGBT legislation. And where three presidential candidates don’t believe gay people should have the right to get married. And where a gay person can be fired simply for being gay in most states. And where LGBT youth homelessness is rampant. And where LGBT bullying occurs with alarming regularity in schools.

We need hope in stories. We need light in stories. And we need stories to work their magic in the lives of the people who would oppress and persecute us because we’re gay. Stories are fatal to bigotry.

To care about story isn’t to ignore the darkness of the real world; to care about story is to put your hope in something that changes the real world, more than anything else. There’s a reason all religious texts are made up mostly of stories. There’s a reason the same-sex marriage approval rating in the U.S. rose in direct proportion to the number of gay characters on television. Story gets inside us and changes the alchemy of who we are.

Here’s Graham Swift, one more time, and then you can have this infographic:

“Man — let me offer you a definition — is the storytelling animal. Wherever he goes he wants to leave behind not a chaotic wake, not an empty space, but the comforting marker-buoys and trail-signs of stories. He has to go on telling stories. He has to keep on making them up. As long as there’s a story, it’s all right. Even in his last moments, it’s said, in the split second of a fatal fall — or when he’s about to drown — he sees, passing rapidly before him, the story of his whole life.”

I know it will be an impulse to snag this graphic and paste it everywhere but here. Please don’t. Please link it and visit it right here on this page at Autostraddle dot com, so we can continue to make money to pay our staff so we can keep doing this work that matters. And if our work these recent weeks in the wake of Lexa’s death has helped or empowered you, please consider joining Autostraddle Plus. It’s the main way we support ourselves! 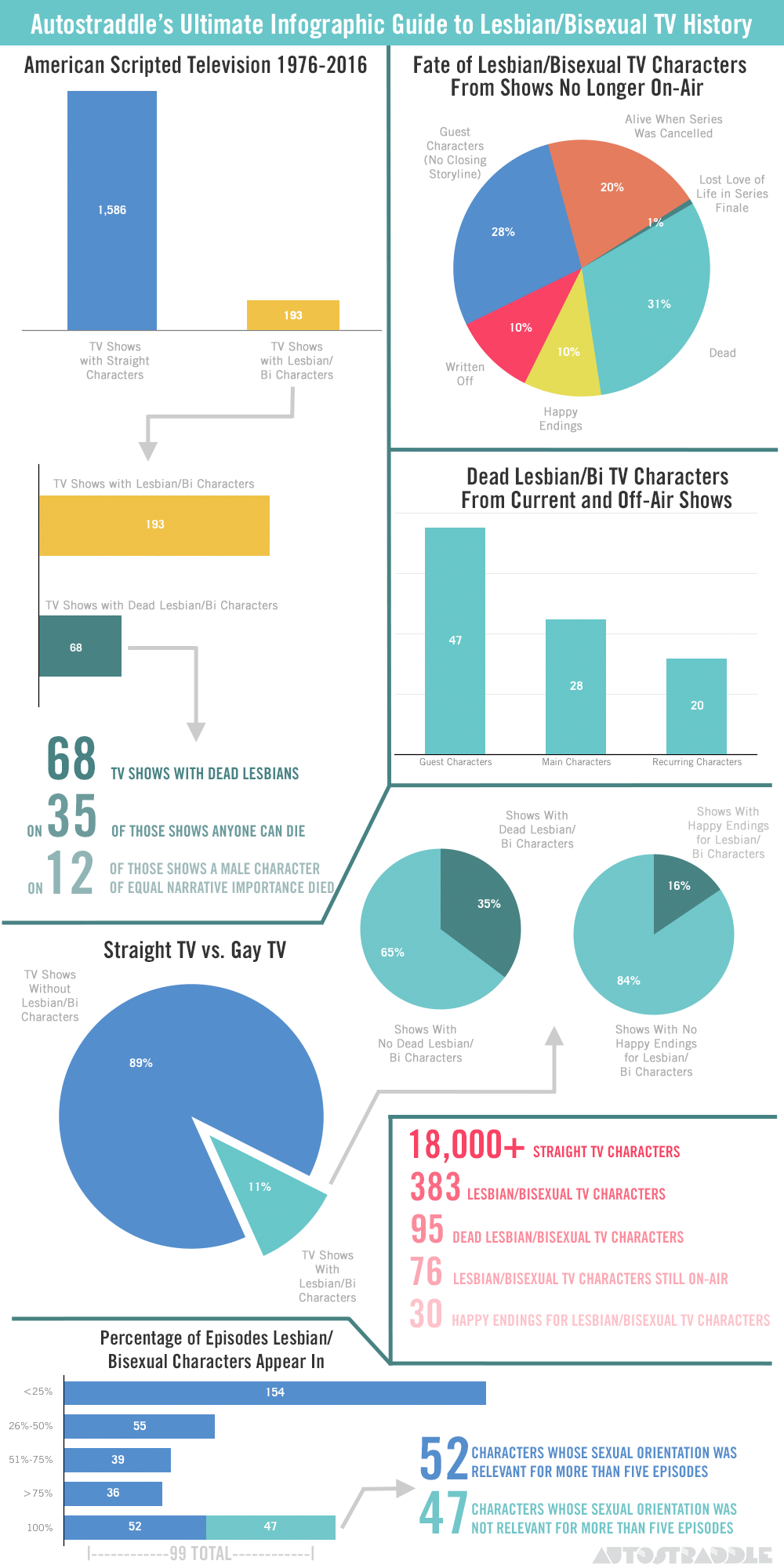