Despite what this contest (and the 2018 edition) might suggest, I don’t ship couples. With rare exceptions, I’ve always said, “I don’t care what happens, just as long as the story is good.” So when I say I never imagined this contest to be another battle in the long line of internet shipping wars, you know I mean it. Instead, what I was really interested in — besides introducing people to new shows, perhaps — was figuring out why Fanon still calls to us.

We’re living in the renaissance era of canon queer ships right now. There have never been as many queer folks on television as there is right now. When you think about the earliest depictions of lesbian and bisexual women on television — like Tara and Willow on Buffy the Vampire Slayer or even Bette and Tina on The L Word — could they have imagined a world where couples like Syd and Elena of One Day at a Time or Callie and Arizona of Grey’s Anatomy even existed…much less got front-burner stories that were even more dynamic than their straight counterparts?

These days, stories spring up faster than even the TV team can rush to cover them. Streaming services have led the push for year-round content…so even when you’re not seeing new episodes of your favorite queer character on one show, there’s an opportunity for you to discover a new one on a different show. There’s more diversity within those depictions too: more characters of color, more non-binary people, more trans people. Even genres that had previously been reluctant (read: scared) to feature queer characters are embracing them now: we’ve got trans and non-binary superheroes and an entire world of queer animated characters.

And yet, fanon still exists…and, surprisingly, it’s more popular than ever. According to a recent analysis of Top 100 F/F ships from Archive of Our Own, 54% of the most often written about couples are fanon, compared to just 33% being canon. It’s unsurprising, perhaps, that our finalists in this Canon vs. Fanon contest are among the top 10 most written about ships on AO3 last year.

“Truthfully, sometimes the only thing canon ships really have going for them is that they’re canon,” Lynne Arlington, the brains behind the most read Supercorp fic on AO3, told me. “But most of them time: canon is just bad. A canon ship surviving an entire run of a series in a coherent and interesting way is kind of a rarity.”

And that gets to the heart of it, right? Fanon allows us to utilize the backstory developed on-screen without having to subject our characters to the unnecessary drama that oftentimes constrains television writers. We’re able to avoid tropes that TV writers just can’t…mostly because they don’t know enough about queer fandom to know what the tropes are. Fanon embrace the chemistry between two characters and letting that dictate story, instead of forcing story to dictate chemistry. Fanon allows for queer community in a way that canon often doesn’t…there can be (and should be) more than one queer couple in a space at a time. After all, if there’s one thing that this canon renaissance has taught us for sure, it’s that there are never enough.

And, on that note, a look at our championship bracket: 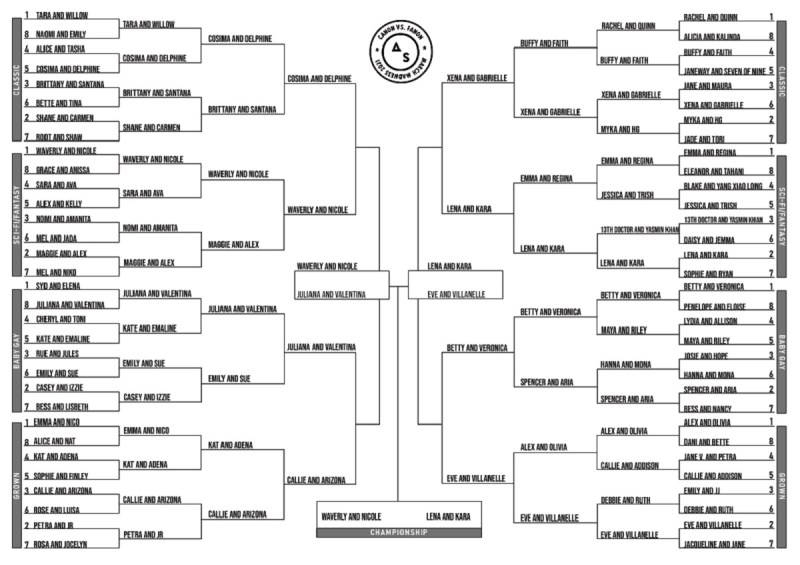 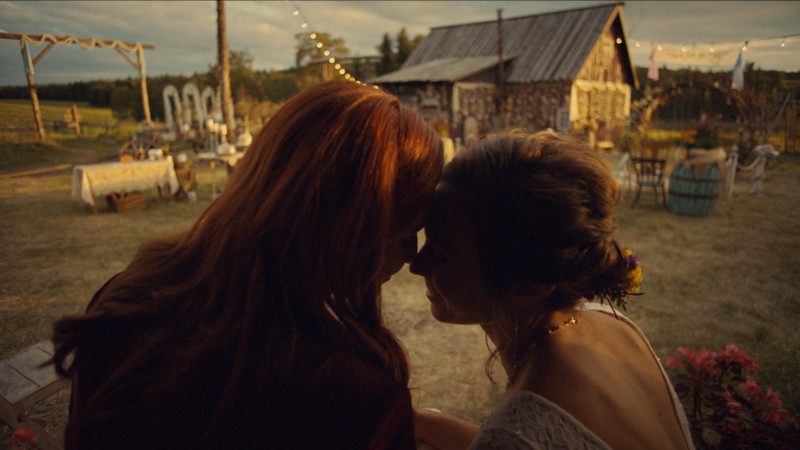 Representing Team Canon is Waverly and Nicole from Wynonna Earp. The Sci-Fi/Fantasy region is always our toughest of our March Madness contests but Waverly and Nicole managed to overcome some stiff challenges to make it to the finals. They competed against four popular ships — ThunderGrace in the opener, AvaLance in the Round of 32, Sanvers in the Sweet 16 and Cophine in the Elite 8 — and managed to defeat each one. What’s been incredible about WayHaught’s progression is that, with each round, the support seemed to grow more fervent, even as their opponents grew stonger. In past years, for Waverly and Nicole, that hasn’t been the case: they’ll start strong, dominate in the early rounds and fizzle just ahead of the finals, but this year — perhaps driven by the show’s (possible) end — Wayhaught’s fan support has been growing and growing.

But even I thought they’d met their match in Amar a Muerte‘s Juliana and Valentina. After seeing their run through the 2019 contest, I knew how formidable the Juliantina fandom could be. They’ve powered their ship to a spin-off and a movie, surely they could pull off another win here…but Waverly and Nicole were not to be denied. I watched the lead volley back and forth between Juliantina and WayHaught as the votes flooded in, but in the end, the pair from Wynonna Earp moves on to to represent Canon couples in the finals. 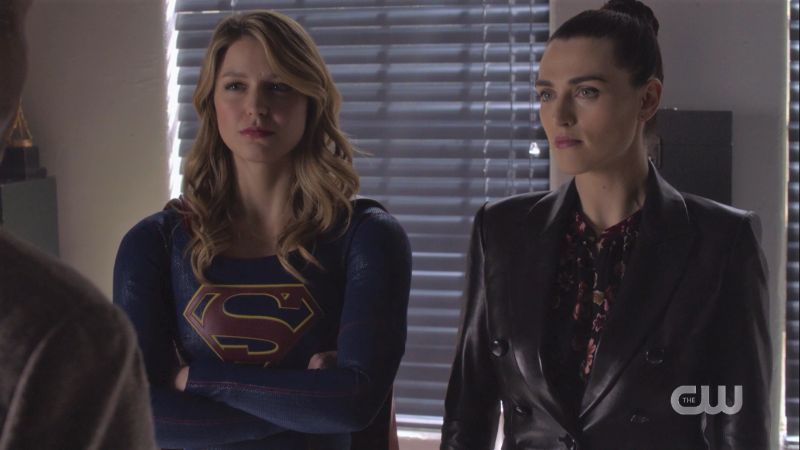 Representing Team Fanon will be Lena and Kara from Supergirl. Admittedly, I thought that the Final Four was just a formality…of course, SuperCorp would win. I thought that Supercorp’s true test had been in the Sweet 16 — a battle with the formidable Swan Queen — and after that, it’d be smooth sailing into the finals. But Autostraddle readers had a different point of view: their semi-final match-up with Eve and Villanelle was a surprisingly close one, with Supercorp pulling it out in the end.

The SuperCorp pairing hasn’t been as formidable through their half of the bracket as our canon ships were and the competition wasn’t nearly as fierce. Does that mean that they’re a weak finalist? I wouldn’t be so sure: according to the aforemention fanfic study, they were the most popular fanon ship on AO3 last year. If the fandom’s got that much energy behind it, they could easily pull out a victory here.

What’s the allure of SuperCorp? According to Arlington, “there’s a real substance to it…of two women with legacies and complicated pasts finding a connection with each other and trusting each other, and that substance got more and more strong as season two went on and has really kept building over the last few seasons. Their relationship (platonic or otherwise) has become an anchor on the show that has kept me tuning in week to week.” 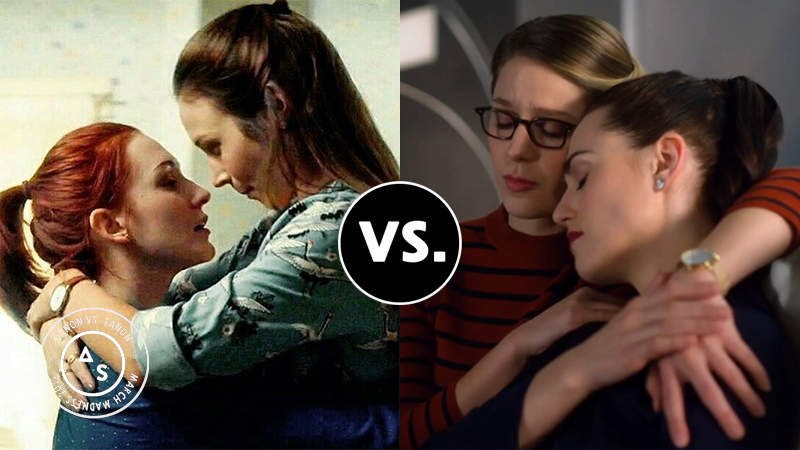 As always, you’ve got 48 hours to cast your ballot in this final round of Autostraddle March Madness. We’ll be back on Wednesday to announce the winner and which reigns supreme: CANON or FANON!