Warning: spoilers, gay and otherwise, for the season one finale of Astrid & Lilly Save the World ahead!

Astrid & Lilly Save the World ended up being one of the cutest gay gifts TV has given us in a minute, and the season one finale proved it’s ready to Go There and is worthy of a second season.

The season one finale started the same way the pilot did, with our girls elbow deep in some monster guts. But this time instead of being unsure, they’re confidently digging around until they find what they need, complimenting each other on how badass they look covered in alien goo. It’s their 10th monster part, the last on Brutus’s list to activate their orb.

They’re excited to do some normal teen things at their normal teen dance, but then they realize they’re actually going to have to fight their big bad there instead. They gather their ragtag group of unlikely allies—Eggs, Tate, and Candace—and split up to get ready. Astrid and Lilly get to have their quintessential getting-ready-for-the-dance scene. It once again is a parallel to the pilot, but whereas then they were awkwardly crashing a party no one wanted them at, now they’re confidently crashing a party with matching Pink-Lady-style Pudge Patrol jackets. 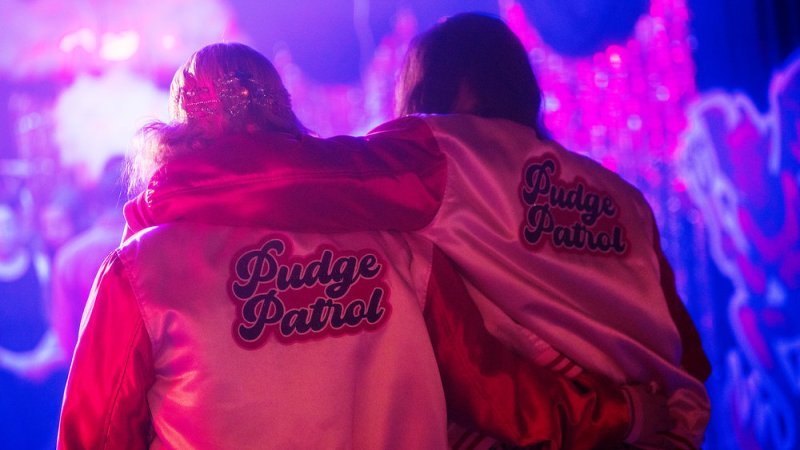 Obsessed with these besties.

They stop by to say goodbye to Brutus on the way, and they learn that actually he lied to them. He wasn’t helping them close the portal they opened, he tricked them into helping him open a portal to find his beloved. He used them.

Astrid and Lilly are bummed that all the work they were doing to try to save the world was not actually going to help them in the long run. But then they realize that no matter what it was for, they really did vanquish ten whole monsters. So they can’t count themselves out yet.

And now when a bully insults them, they don’t even have to pretend to not be fazed by it. They just hold their heads high and stroll right over to their friends. Candace tells Lilly she’s gorgeous, and gives her and Astrid flowers. “You’re going to make me like you, aren’t you?” Astrid realizes. It’s very sweet and cute and you love to see it!! 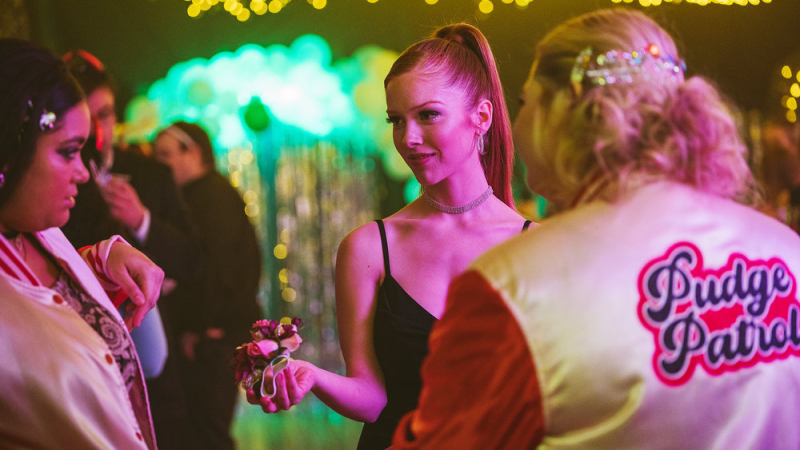 If you wanna be my lover, you gotta get with my Pudge Patrol.

Lilly is even crowned royalty of this random dance (and Candace yells, “That’s my girlfriend!” as she takes the stage) which Tate says he helped orchestrate as a way to make amends for outing Lilly and Candace and being so rude to them. And as another act of atonement, he immediately passes his victory dance off to Candace so she and Lilly can dance together. 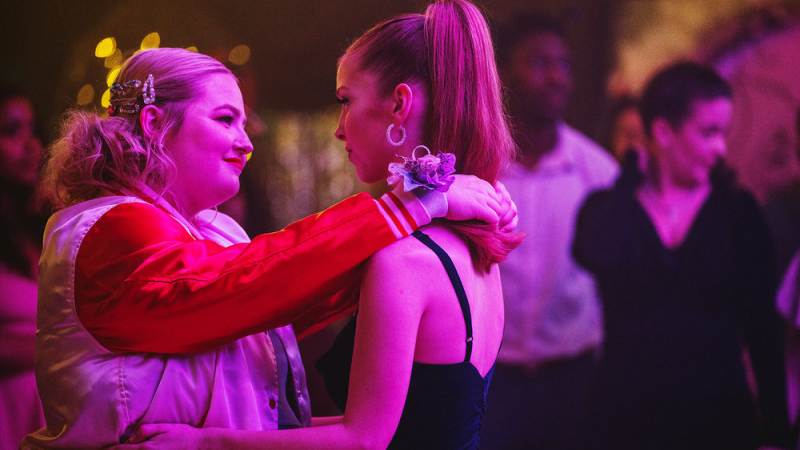 There was this cute half-a- moment where they didn’t know where to put their hands.

The Guardian decides he needs more intestines and wants Candace’s because he realizes it would upset one of the monster hunters, but his right hand woman stands between him and her daughter and won’t allow it so he…rips her guts out! Kills her dead! I gasped! I will be honest, with the cartoonishness of this villain, I truly was not expecting actual stakes.

Of course, our heroes end up defeated the bad guy; it’s their world now. And they’re on cloud nine about it until Candace asks where her mom is. Lilly tries to reassure Candace that her mom died saving her life, but Candace wants to know why Lilly couldn’t save hers. I guess the honeymoon period is over…

Astrid gets her boy Sparrow back though, so it’s not all doom and gloom for our gals.

Astrid and Lilly take the Guardian’s necklace to their portal to close it for real, and they find the moment a little bittersweet. They’ll miss being monster hunters. But then when they do close the portal, they realize their weird sense of smell and magic kicky leg might be gone, but they have new strange feelings: Astrid’s hands are tingly and Lilly is…floating!

And that’s where it ends! Which is one of the many reasons I am going to have to demand a second season of this show.

This finale is the perfect example of why I love this show. Was the big bad the scariest and most threatening big bad on all of TV? No. Was it the most epic battle in the history of sci-fi? Nope. But you know what? I don’t care. It didn’t matter! The monsters were a fun diversion but they weren’t the point. Astrid and Lilly were the point. Sure they were defeated monsters, but more importantly they were overcoming their fears and insecurities.

They were finding pieces of aliens for the orb but they were also finding themselves, and their people. My favorite kind of sci-fi is the kind that puts character first and lore second, and that’s exactly what this show did. Granted, I still loved the lore, and all the monsters from the silliest to the scariest, and I loved their spin on some of my favorite sci-fi tropes like nightmare manifesting, doppelgangers, etc. But most importantly I loved that this show had so much heart. It took two beautiful weirdos and unapologetically made them the heroes. More importantly, it made THEM realize they’re the heroes. 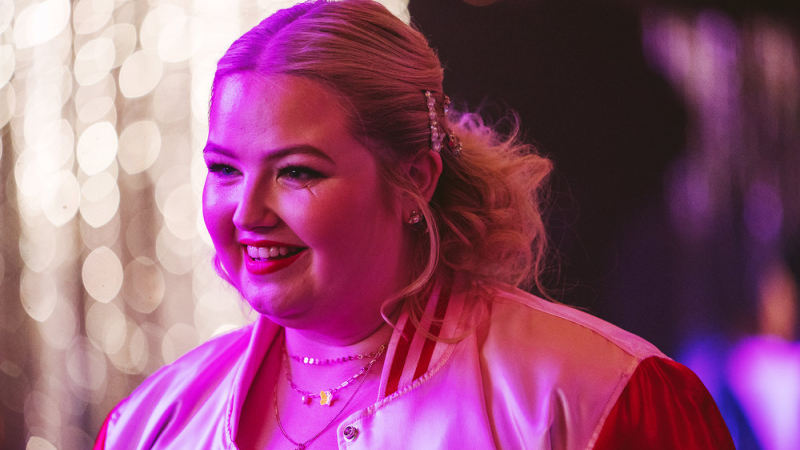 Sorry I just had to include one more picture of this cutie beaming at her girlfriend.

I have such a complicated relationship to my size because of shit I haven’t dealt with in therapy yet, and sometimes that makes me resistant to consuming content that’s about fat people, even when I’m assured it’s positive representation. Because too often it just ends up being such a main plot point that it ends up being all I can think about for days and I have plenty else to worry about these days, thank you very much. And even though I see actresses like Aidy Bryant on Shrill and think they’re beautiful, I still manage to talk myself out of thinking that could be me. Like of course she’s beautiful she’s Aidy Bryant. Couldn’t be me! Especially because shows like that tend to be hyper-straight and just so far from my reality.

Somehow, this weird little show about teenage monster hunters felt closer to my life than any of those shows, and to me they struck the perfect balance of talking about the fact that Astrid and Lilly weren’t the skinniest girls in school without making that their defining quality. When they stopped seeing it as a defining quality of themselves and started seeing themselves for the badass, amazing, smart, hilarious, capable women they are, the mean kids stopped seeing it, too. And that confidence and self-assuredness helped Sparrow and Candace notice them in a new way, but it also opened them up to being noticed in that new way, instead of walking around desperate to avoid being perceived. I’m still learning that part, the allowing myself to be perceived part. But thanks to Astrid and Lilly, I feel one step closer to slaying my own monsters.

While I do wish the ending for Lilly and Candace was more hopeful than it was, all it does is make me want a Season 2 more than ever. And I’m not ready to lose watching Samantha Aucoin and Jana Morrison bring these adorable best friends to life with so much charm. Fingers crossed we don’t lose this gem of a show too soon. A show with women and non-binary people on screen and behind the scenes, plus a whole gaggle of queers, deserves to continue to bring us joy, especially in a time when joy is hard to come by.

Join A+!
Related:Astrid and Lilly Save the World