Are you a queer woman/non-binary rockstar? Do you tech? Not just in the Silicon Valley area but say…in Europe? Well, my fine-feathered friends, you are in luck. Lesbians Who Tech is taking their first international plunge with a Lesbians Who Tech Summit in Berlin from August 28th-30th—and its vibe is gonna be quite different from its counterparts in San Francisco and New York City. I caught up with Leanne Pittsford, Founder of Lesbians Who Tech to ask a few questions about the Berlin Summit. And boy, am I jealous of anyone who can hop on a train and find themselves there! 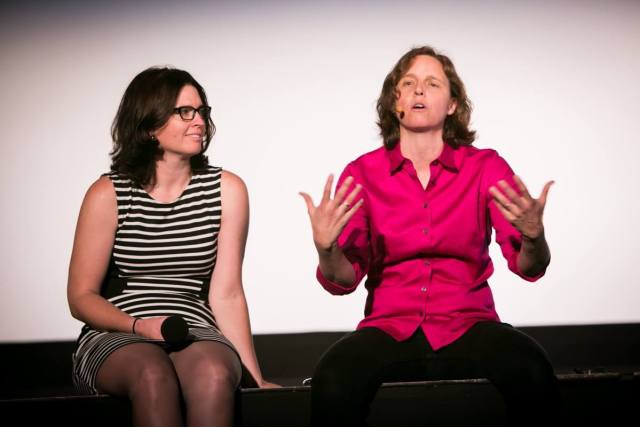 Ali: What inspired you to go international?

Leanne Pittsford: I think a couple of things. First of all, I’m really passionate about visiting other places and experiencing other cultures. I think professionally we have a daily pattern for how we structure our lives, but when we step out of our environment and change it up a little bit, we learn so much. Not just about ourselves but also about the world. We open up our minds to different sorts of creativity. I think tech issues are different in other countries, and you can’t really learn until you’re there. I think getting a sense of the community there is important. We saw that even in the states. Really, the San Francisco Summit in 2014 was our first event being really legit in getting a pulse on who our community is, what they want and what they’re looking for. And I almost think that this is a first step in figuring out what other communities value and want in Lesbians Who Tech. I think Berlin is just the first step on the map towards being more globally oriented.

Ali: That sounds awesome. Could you explain the mechanics of it? Because I know this originally came out as “Lesbians Who Tech On A Plane.”

Leanne Pittsford: Yeah, we are kind of doing a hybrid of these events. Basically, Lesbians Who Tech On A Plane is people experiencing other places and cultures, but at the same time people wanted more than just the Summit. The Summit is great, you spend three days generating with people, but there’s nothing like going to a different country and bonding with people. Some of my best friendships have been with people I have traveled with because we’re there for a week and you don’t have any plans. You’re working, but you hang out. The question is “When can we hang out tomorrow?” and not “When can we have dinner in three months?” We’re so stuck in the 9 to 5 world that it’s hard to even get dinner on the calendar with a friend, and I think that type of interaction is so important to building deep and meaningful relationships. We wanted to do something like that.

I thought we could get some people from the States over to Berlin before the Summit and visit some co-working spaces, see Berlin, visit the companies there, and just bring together a good group of people who can build relationships. Then we’ll end the five day experience with the Summit, which is a bigger event where we bring as many people as we can from Europe, which is a more typical Summit experience. Well, it’s not going to be typical in the sense that it’s in Berlin and it will be a smaller group of people than our New York and San Francisco Summits, but I think that’s going to be really cool and allow us to be creative in a new way.

Ali: This sounds so cool. Content wise – you mentioned structurally how it will be different than New York and San Francisco – but what sort of content do you have planned for the Summit?

Leanne Pittsford: The big difference for me between New York, Berlin and San Francisco is that we’re still new, so we don’t have the relationships with all the tech companies in Berlin, but we started with some companies with offices in Berlin that are big in the States. Some of our speakers there are Dominique DeGuzman, a Software Engineer at Twilio and we have Christy Gaughan, the Senior Analytics Manager at Genentech who will be doing the Leadership talk that she did at the San Francisco Summit. We have someone from Google – Mia Mora. We have someone from Amsterdam talking about privacy and security, which I think is a little bit different too in the European, especially German, culture. Privacy, but also people just wanting to share their e-mail is so different culturally in Germany. That’s something we want to learn about, so that’s something we are going to focus on from a content perspective. Carrie Bishop who works in Civic Data is going to come from London to speak, and she’s also bringing people from all over Europe to talk about government tech. We’ll be talking about some of the cool things governments are doing with technology.

We’re just trying to get a pulse of what Europe is like from a technology perspective. Then what are some of the cool things happening in the United States that we can bring over and talk about. At the same time, we’re going to leave room for participants to participate in a way we haven’t done in the United States. We might do a group Ask and Offer, which is where we start the day saying: “Here’s what I need help with, and here’s what I can offer.” We want to leave room for things that come up in the beginning of the day to talk about at the end of the day. In San Francisco and New York it’s so important to have a really tight line-up and really tight speakers, so I’m hoping we can experiment with this and bring back what works to all of the conferences.

Ali: Is there anything else that you’re anticipating will be different culturally in tech that you’re addressing?

Leanne Pittsford: I think we are really leaning on people who are from Berlin to help us with getting a clear sense of tech identity. But it’s not just German focused, there are people coming from all over Europe. Data, Privacy and Security are top issues. I think the government tech stuff is interesting, it’s not one of the top issues we have but the community is interested in focusing on that because we have a lot of people coming from that space. That’s the other thing that we get to do more creatively. We can say: “who’s coming to our summit?” We can dig a little deeper into their profiles, see what they are interested in. It’s harder when you have twelve hundred people. We have two hundred people for this one, so we’ll be able to have a little more flexibility and customization with the content.

It’s hosted at SoundCloud which is a really cool office in Berlin, so there’s a couple of spaces where we can have really good conversations, and it’s not your typical “Here’s the main stage with the band.” There’s a lot more Q&A, a lot more ability to interact between speakers and attendees in a way that I think will be really great. It’s hard to find that in conferences now because everything is so big, and to make a conference sustainable for many reasons you can’t do it in a small way. I’m excited to do something smaller again and to spend real quality time with people and allow them to interact in a way that’s really unique and hard to find. I do want to just mention that we are also looking at Asia for one of our next places. We’re starting to look at other markets and for us it’s obviously about listening and working on an event with Google where we use Google Hangouts in other countries and highlight queer women who live, for example, in India where there are obviously issues of being out, especially out at work. We need to listen and learn and we need people in those places to participate. We’ve had people interested in China, and we’re always open and willing to make it happen.

Ali: If people outside of the United States want to get Lesbians Who Tech involved in their area, what are the steps they should take?

Leanne Pittsford: They should just e-mail me!

Ali: Is there anything else you want to mention?

Leanne Pittsford: This is just the start for us internationally. We’re working to build communities, so for us it’s a mixture of these big events but also finding people who want to build community locally. Hopefully we can replicate some of the magic that we’ve created in San Francisco or New York, and DC and Boston, LA, Denver, Austin and Seattle.

Leanne Pittsford wants our international Autostraddle readers to be there! She’s arranged to give away five tickets to Autostraddle readers, and all you have to do is leave a comment on this post! Tell us why you’re excited to go to the Summit, what your opinions are about international tech culture and queer culture, or what tech project you’re working on right now that you want to talk to your fellow nerd-queers about! You’ve got until Friday, August 7th at 9pm to leave a comment. I’ll announce with winners on Saturday! Winning will be random — I use a random number generator and a spreadsheet of all the people who commented. You’ll have to arrange travel to Berlin yourself, and if you can be there the five days previous you might be able to take part in some of the lead up events. If you win, shoot me an email about that and we’ll get you all set up! If you don’t win, tickets for the Summit are $100 and the Five Day experience tickets are $200.

Can’t make it to Berlin? Don’t fret! Here’s a list of other Lesbians Who Tech events that you might be able to make it to!

And Now For Our Winners!

Thanks, everyone, for playing! I picked our five winners using a random number generator! Here’s who’s on their way to Berlin:

Congratulations! All of y’all will be getting an email from me shortly telling you what to do.

The above interview was edited for length and flow! Just fyi! Feature image via SXSW.