As you know by now, Donald Trump made a sudden and unexpected trip to Mexico just a short while ago, where he met with President Enrique Peña Nieto before giving a speech on immigration in Phoenix, AZ where he promised to “crack down” on “illegal immigrants.” Rudy Giuliani gave a speech wearing a baseball cap that read “Make Mexico Great Again Also.” Jeff Sessions did too. Apparently it was Trump’s idea.

How did we get here? What series of events have led to this? Mexico and its people have been a favorite talking point of Trump’s throughout his campaign, and a fulcrum upon which the public conversation turned. Let’s journey through a timeline of Trump and Mexico together. 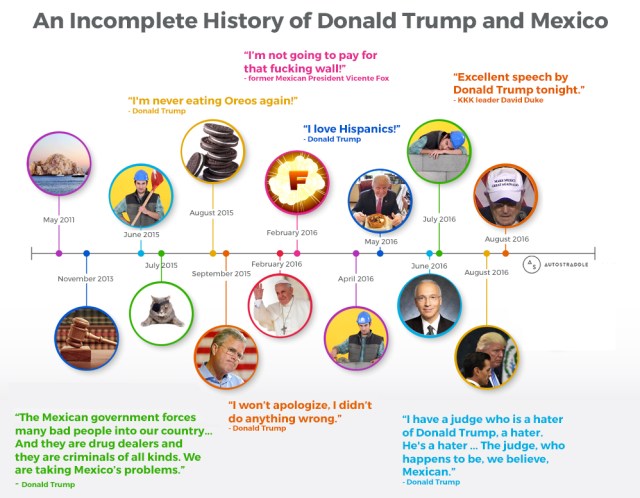 Trump lends his name to a luxury high-rise resort in Baja California, Mexico, which is never ultimately constructed and costs would-be condo buyers millions of dollars in lost deposits.

The would-be condo buyers in Baja California settle with Trump after suing.

Trump announces he will build “a great, great wall on our southern border and I will have Mexico pay for that wall.” The proposal comes more or less simultaneously with his announcement of a presidential bid, making it in many ways the defining issue (“issue”) of his campaign.

Donald Trump tells CNN that Mexico is “sending people over” and “Some are good and some are rapists and some are killers. We don’t even know what we’re getting.”

Univision, partially owned by Mexican company Grupo Televisa SAB, canceled its telecast of the Miss USA Pageant, a Trump media property, in response to his comments about immigrants. As context, Bloomberg reports that Trump’s lawyers claim that Grupo Promotor MU Mexico SA still owe Trump millions of dollars from the 2007 Miss Universe Pageant, when the group said they would put 26 businesses in a trust as collateral for payment regarding the pageant, and never did so and then failed to make their payment. Based on language from his lawyers, it would seem Trump characterizes Mexico’s courts, and the country, as “corrupt.”

I have a lawsuit in Mexico’s corrupt court system that I won but so far can’t collect. Don’t do business with Mexico!

Trump visits the US/Mexico border with Border Patrol. “I’m the only one that speaks their language,” he said. It’s not clear to whose language he refers. The border patrol actually rescinds their invitation after protests, although Trump describes the protestors who met him at the airport as “supporters.”

Donald Trump kicks out veteran Univision reporter Jorge Ramos from his press conference, telling him “sit down” and “go back to Univision,” a confusing proposition since Ramos is presumably there on behalf of Univision already.

Trump threatens to “place a big tax” on Fort Motors if they build a plant in Mexico. As WDET notes, “A president cannot impose taxes on a company on his or her own.”

Jeb Bush requests that Donald Trump apologize for tweeting that “Bush likes Mexican illegals because of his wife.” (Columba Bush.) Trump responds that “I won’t apologize, I didn’t do anything wrong.”

Donald Trump claims in a debate that if elected, he will eliminate birthright citizenship in the US, claiming that no other country has it, “not even Mexico.” This is false.

“Surely there are some people that have been waiting for the President to assume a position regarding everything Trump said. I disqualify and condemn any expression that aims to discriminate and hurt Mexicans. But what I don’t want to give into as President of Mexico, is to play this political game with someone, to be a part of this political dispute that is happening in the United States and by someone who is not even a Presidential candidate yet. I will not contribute, I will not assume a position against someone that has discriminatory comments that merit to be condemned but beyond that, I don’t want to do it simply because I don’t want to be involved or even be part of a game with someone so aspires or pretends to have a positions as chief of the state. It’s a very shameful situation but I don’t want to play along with someone who is just in the run to become a candidate.”

A play called Los Hijos de Trump sees success in Mexico, with actors playing Trump and imaginary sons of his in a satire.

“Sons of Trump” happily roots around in those entrails as it goofily satirizes capitalist pigs. The Trump character functions in the play as the patron saint of the filthy rich, encouraging his look-alike “sons” — often by means of a spooky disembodied voice — to cheat, steal or kill their way to pecuniary glory. He’s the apotheosis of all the deadly sins, with special attention to gluttony and greed. Most of the play is unspoken, as the actors clown around and pantomime their jokes.

Trump criticizes Pope Francis for visiting areas close to the Mexican border, calling him “political” and saying “I think that he doesn’t understand the problems our country has. I don’t think he understands the danger of the open border that we have with Mexico.”

Donald Trump says “I have a lot of respect for the Pope. He has a lot of personality and I think he’s doing a very good job, he has a lot of energy,” despite the Pope’s statements that “a person who thinks only about building walls… and not of building bridges, is not Christian.”

Former Mexican president Vicente Fox tells Jorge Ramos in an interview that Mexico will not pay for “that fucking wall.” Trump tweets that “Vicente Fox horribly used the F word when discussing the wall. He must apologize! If I did that there would be a uproar!”

Enrique Peña Nieto declares through his chief of staff that he “expects Republican candidate Donald Trump or any other candidate elected president to work with the Latin American nation.”

Mexico City legislators unanimously pass a proposal of a symbolic ban to block Donald Trump from entering the country.

In his first attempt to explain how his idea of making Mexico pay for a wall would work, Donald Trump proposes blocking Mexican immigrants to the US from sending money to friends or family back in Mexico, as well as raising visas and canceling visas for Mexicans traveling to the US.

The Washington Post writes that Trump’s wall is unlikely to make it into the GOP’s official party platform.

In the ongoing case of the lawsuit against Trump’s fraudulent Trump University, Trump complains that Gonzalo Curiel, the federal judge presiding over it was biased, saying he “happens to be, we believe, Mexican.”

Trump says, regarding his statements on Judge Gonzalo Curiel, says that “It is unfortunate that my comments have been misconstrued as a categorical attack against people of Mexican heritage… I do not intend to comment on this matter any further.”

The GOP finalizes their official party platform, which includes a vision for Trump’s wall.

Trump goes to Mexico for a last-minute meeting with Nieto, where he is reported to have “[struck] a remarkably subdued and cooperative tone.” Trump reports that they had “a great substantive, constructive exchange of ideas over quite a period of time,” and that who would shoulder the cost of a hypothetical wall was not discussed. Nieto tweets that, to the contrary, he made it clear at the very beginning of the conversation with Trump that Mexico will not pay for any wall.

Hours later, Trump gives a speech on immigration in Phoenix AZ, where he describes Nieto as “a man I like and respect very much, and a man who truly loves his country. Just like I am a man who loves the United States.” He goes on to reiterate previous claims of his that many Mexican immigrants are violent criminals who have killed and sexually assaulted Americans, and that “these facts are never reported.” He says that “on my first day in office, I am also going to ask Congress to pass “Kate’s Law” – named for Kate Steinle – to ensure that criminal aliens convicted of illegal reentry face receive strong mandatory minimum sentences,” and that he will ban sanctuary cities.

“Anyone who has entered the United States illegally is subject to deportation,” he says. “That is what it means to have laws and to have a country.”