It was the best of times, it was the worst of times. And now it’s over! You guys, where did the week go? If you’ve been diligently reading between the lines of every line on this website you might feel like you saw the whole thing happen, but there’s a few things left. So here’s all the stories we missed this week!

I want to start off with bad news because I like happy endings and I think they are good for the soul. Chicken soup, you see. So let’s skip right to the worst stuff: an attack on two trans women in a McDonald’s bathroom in New York last Wednesday, an incident at Norfolk International Airport involving two gay dudes and a sex toy strapped to their luggage which is both bizarre and uncomfortable, and the gay fraternity that almost was but will not be at the University of Louisiana.

This is all not to directly mention sexism, which is everywhere obviously because the patriarchy, but is also in science labs, the Internet, and hockey culture, one or more of which might be things you hope to someday enjoy without your gender being an issue! Also, did we ever tell you about the extremely high cost of being a woman in general, but especially one who is not financially literate? Please figure out how to be financially literate and do so before everything is all fucked up.

If your head isn’t already pounding, and maybe if it is but if you took two Advil or a Valium, you should sit down, breathe deeply, and watch a preview of Iranian President Mahmoud Ahmadinejad and Piers Morgan discuss the “legitimacy of homosexuality.”

God, that was hard. I wanna listen to Lana Del Rey. But wait! The good news is that we shall overcome. Always, you guys. Always.

Mary Kristene Chapa of Texas – who survived a shooting which took her girlfriend’s life three months ago – is speaking out now about the incident and her recovery. And Nate Phelps is speaking out against his father’s work with the Westboro Baptist Church in the most public ways possible:

As the pastor of the much-reviled Westboro Baptist Church, Fred Phelps has become synonymous with hatred. The pastor and his family make it a point to carry signs at the funerals saying, “Thank God for Dead Soldiers.” They show up to media-friendly events with signs that read, “God Hates Fags.”

Nate Phelps is the sixth of Fred’s 13 children, and he has the scars to show for it. He describes his father as verbally and physically abusive. When he was 18, Nate ran away from home and from the fundamentalist Calvinist religion in which he was raised.

Now in his 50s, Nate finds himself publicly squaring off with his father and siblings to reverse their legacy of intolerance. He lives in Calgary, where he has become a public speaker who champions LGBT rights and raises awareness about the connection between extreme religion and child abuse. He is currently writing a book about his life and is the subject of an upcoming documentary.

If you were sad about sexism in the NHL at the beginning of this post, your spirits will probably be lifted when you hear of the Australian Football League’s work to reduce homophobia – within the locker room and outside of it – which may include a gay pride exhibition game next season.

If all this wasn’t enough for you, the gender gap in TV writing is slowly slowly very slowly narrowing, a group of Kentucky students who started an underground queer paper are being recognized for their courage, and the super-porn-famous Buck Angel is going to become a full-on sex educator. Also, George Clooney is auctioning himself off for charity on behalf of GLSEN and I secretly would love to drink some vodka with him and stare at his beautiful face. Do you think he’d understand?

OK. So now I would like to take this time to teach you about hip-hop’s “queer pioneers:”

“‘Oh, this fag can rap?’ Yeah, they saying that, they listening.”

The lyrics are from the Harlem-based MC Mykki Blanco. But the sentiment expressed in her after-hours party anthem “Wavvy” is shared by other pioneering rappers who bristle at being defined by their sexual orientation—even as it helps bring attention to their work.

The seven artists in this portfolio are wildly diverse, but they’re all about as far from the down-low as possible. In the “Wavvy” video, Blanco evolves from a male street tough in a backwards Raiders cap to a vamping glamazon in stilettos. When the rap duo House of Ladosha played New York City in July, Dosha Devastation accentuated her beard with a leopard-print sarong, gold hoop earrings, and a waist-length wig; Cunty Crawford Ladosha, all six feet eleven of him, rocked In Living Color Fly Girl-style biker shorts; and the group closed with their calling card, “B.M.F.,” short for “black model famous,” a paean to being as fabulous as Naomi Campbell. Artists such as these—once confined to gay clubs and art-world openings—are inching toward the mainstream. 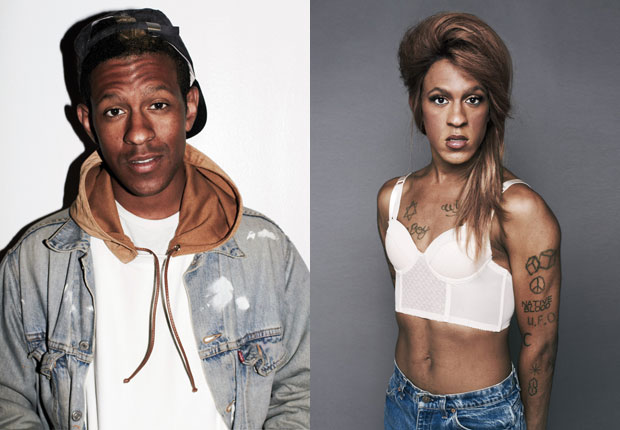 Oh, and sidenote — Mitt Romney recently said he would want his gay grandkids to be happy, should they ever exist, but also still does not support LGBT rights at all! What a moron.