Previously on All American, Coop moves back home with her family but finds that even though she’s been welcomed back into the Cooper household, her sexuality and her girlfriend still aren’t. She finally finds a way to get through to her mother, using the same thing that bonded them when she was a kid: music. Where words failed her, Coop’s lyrics get succeed and it only further cement her commitment to her music. 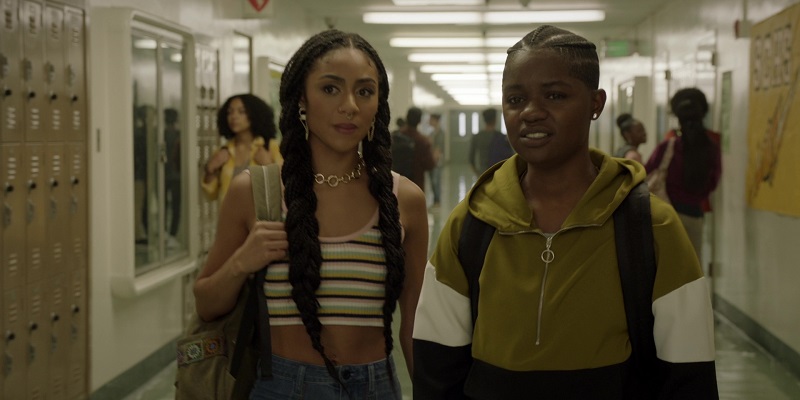 This week, at school, Coop laments that her reputation as a snitch is making her persona non grata. Everywhere she goes, someone’s whispering about her and she hasn’t been able to make any friends. Patience encourages her to look on the bright side: her circle — Patience, Spence and her parents — may be small, but it’s still good, especially with her mother making a concerted effort to accept her relationship with Patience. After the couple shares a brief kiss, they walk down the hall together and happen upon Erik using another South Crenshaw student as lyrical target practice. When he starts taking homophobic shots at the kid, Coop steps up ready to end the one-sided battle.

Erik throws shots at Coop for interrupting his freestyle session and when he chuckles at his own comeback, Coop lets him know that the only thing funny were his rhymes. Naturally, Erik takes offense and steps toward her aggressively. Unbothered, Coop opts to check Erik in the only way he seems to understand: rhyming. She effortlessly drops a freestyle about his haircut, his appearance and his fake gangster shtick. All around Coop, the camera phones go up, recording her verbal takedown on her new nemesis. With each punchline, the crowd that’s gathered around them, hollers and the sting of Coop’s jabs are felt across the South Crenshaw halls.

“Now go to class, go and learn somethin’, boy/ And watch your mouth ’cause you ain’t grown, li’l boy,” Coop rhymes. “Now run and tell ’em Coop did it/ Who are you kiddin’? You know I do this for a livin’.”

Her final bar sends Erik slinking away and the crowd goes wild as if Holyfield has just won the fight.” So elated by her girlfriend’s success, Patience tells Erik that he’s just been Coop’d and the catchphrase echoes throughout the school. After weeks of being ostracized, it takes a moment for the adulation to sink in for Coop but when it does, she revels in it. With video of her school day triumph racking up 200+ likes, Coop’s confidence is at an all time high and she’s ready to test her freestyle skills in an upcoming competition. Spencer cautions against it — there’s a big difference in battling a bully at school and battling legit rappers — but Coop’s ready to shoot her shot and see what happens.

By the night of the show, the high from Coop’s “viral” moment still hasn’t worn off and she’s ready to do her thing on stage. Coop’s first doubter meets her at the door: Preach, who works security, scoffs at the idea that Coop can hold her own. But when she steps on-stage, Coop proves her doubters wrong, advancing past the first two rounds and into the finals. Coop’s feeling herself a little too much — she’s already got designs on using the prize money for studio time — but Spencer warns his best friend against getting too cocky. Coop swears that it’s not about winning, she just wants to prove herself against some serious competition. To that end, Spencer’s girlfriend Leyla — who, to put it mildly, is going through some season two of The L Word Jenny Schecter-like trauma mixed with Helena Peabody money — decides to sweeten the pot, adding $1500, plus free studio time, to the competition’s grand prize… and, sure enough, Coop ends up facing a much, much stronger competitor. 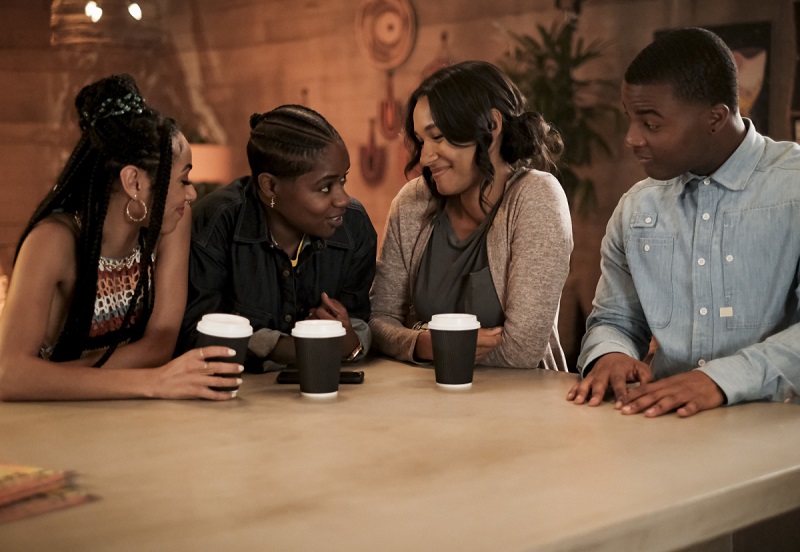 The event’s host opts to step in and battle Coop in the final round… and he eviscerates her. He takes shots at her sexuality, her family’s rejection of her, her snitching on Tyrone and getting Preach shot. He calls out Spencer and Patience — she’s way out of Coop’s weight class according to him — and in the battles harshest jab, he blames Coop for Shawn’s daughter growing up without a father. It’s every bad thing that’s been said about Coop in what was supposed to be her triumphant moment… and it’s a body blow… there’s nothing that Coop can say in response and she freezes.

After the show, Preach is there to toss a little more salt in the wound: maybe this hip-hop thing just isn’t for her. It’s harsh but well-intended advice from the gang leader, who sees part of himself in the scrappy, young hustler. He advises her to keep her options open but Coop refuses. One bad night isn’t enough to convince her to give up on her dreams. Later, Coop returns to Preach with an offer: they could work together to build her music career, indy-style, just like Nipsey Hussle once did. Preach doesn’t agree right away — he wants to hear more of Coop’s music first — but he’s open to the partnership and a newly invigorated Coop rushes off to get back to work.

There’s nothing ostensibly wrong with this week’s episode of All American. It remains committed to the show’s unique brand of authenticity which is particularly important as the show starts to delve more into hip-hop. But what bugged me about this episode is that I feel like I’ve seen this before. When we met Bre-Z’s Freda Gatz on Empire, she was dropping freestyles during a prison visit with her dad, Frank Gathers. Later, she’s in a lyrical battle with a neighborhood rapper and when his punchlines hit a little too close to the bone, a fight nearly breaks out. Freda pulls out a gun and is only saved from falling into the same traps that befell her father by Lucious Lyon.

It is entirely possible that All American could do a better story about a lesbian rapper breaking into hip-hop than Empire did…given the fact that Autostraddle once noted “Empire Failed Its Lesbian Characters In Every Way” that bar feels especially low. But still, I wonder: we’ve see Bre-Z as a gangster, as a barber and as a rapper on television already, why do we need to see it again? Isn’t there another story that could take advantage of Bre-Z’s obvious charm and charisma? Or, more to the point: does All American‘s Tamia “Coop” Cooper really want a battle with Empire‘s Freda Gatz?