Roughly 90 minutes ago, I saw a hot tip in Autostraddle’s email: “I woke up today to pictures all over my twitter feed of Aisha Dee from The Bold Type and her (apparently) very hot girlfriend. This merits some deep investigative work by Autostraddle.”

As it turns out, there is nothing I want to be true more on the dreary cold January evening than Kat from The Bold Type having a hot girlfriend, Lucy Grace Barrett who will soon be joining the Charmed reboot’s fourth season on the CW. Preliminary searches told me that both Black actresses are also Australian, which is certainly a common ground to build from. And the CW/Freeform-to-gay pipeline is incredibly strong force field, not to be played around with. But that’s really only a start.

And so, we must investigayte.

Our search begins just a mere four days ago, on January 8th 2022, when Lucy posted a photo of Aisha holding her by the neck in a pool and softly kissing her cheek as they lazily float together in the water. Is it romantic? Why yes, yes yes it is. Did it make me squeal “black love is real”? You know it did.

But what is really the heart clincher here, what will have you running to your group chats about how Kat from The Bold Type is gay now? The caption. (Lucy’s caption game will be a reoccurring player in this study).

The slight deprecation of your girlfriend by calling her “the stinkiest person” — you don’t get away with that unless y’all are sharing a bed and eating food off of each others forks in the morning. Just saying.

The earliest photo I could find of the potential couple comes from August 2021, cuddled together in bikinis on beach blankets against some enviable soft white sand.

And sure, technically speaking, these photos do not tell us that Aisha Dee and Lucy Barrett are dating, but I ask you to check Lucy’s hand placement. Ladies, is it gay to cuddle your bestie while also cuddling your own breast and making her laugh?  I would argue, it is.

(Also, Aisha? That small tattoo curving your upper thigh? I see it, and respectfully, I appreciate it.)

Ok so I will be the first to admit! At this point in our Instagram deep dive, we hit a snag!

On November 20, 2021 Lucy captioned this photo of her and Aisha as “Chloe x Halle but make it gay,” which at first glance seems promising (after all you don’t call something “make it gay” if you’re trying to seem straight)…

However I would not caption a photo of MY hypothetical girlfriend as “Chloe x Halle” on the count of Chloe and Halle being literal sisters. Definite mixed messaging.

But once again, when we zig, we zag.

I switched over to Aisha’s Instagram, just to do a quick look around. That once again lead us back over here in 2022, on January 3rd, Aisha posted photos from what I assume was her holigay or New Year’s beach vacation with Lucy. They’re seemingly without clothes in the first picture and there’s a topless photo of Lucy in the second photo of the carousel, elegantly covered with a blue butterfly.

To be extremely fair and generous, everyone gets naked sometimes. I don’t think gays have the exclusive on naked hugs. But! STILL! YOU! SEE! IT!

And thanks to one fan account on Twitter from October, we also know that Aisha spent at least some time in Vancouver while Lucy was filming Charmed. Lucy and Aisha were also in Australia together last winter 2020, filming a horror-satire film called Sissy (potentially this might be where they originally met).

This is when the last piece of the puzzle slotted into place. With a headache pounding against my skull from our little journey through the photos of an internet stranger I will never know for the greater good of gay gossip, a bright thought came to me from the thin air!

“Check her stories, you dummy!”

Of course! OF COURSE! And there it was, posted 14 hours ago on Lucy’s Instagram, a casual and grainy cell phone image of Lucy and Aisha, while not kissing, sharing the closest amount of air that two humans can share before they swallow each other’s faces whole. 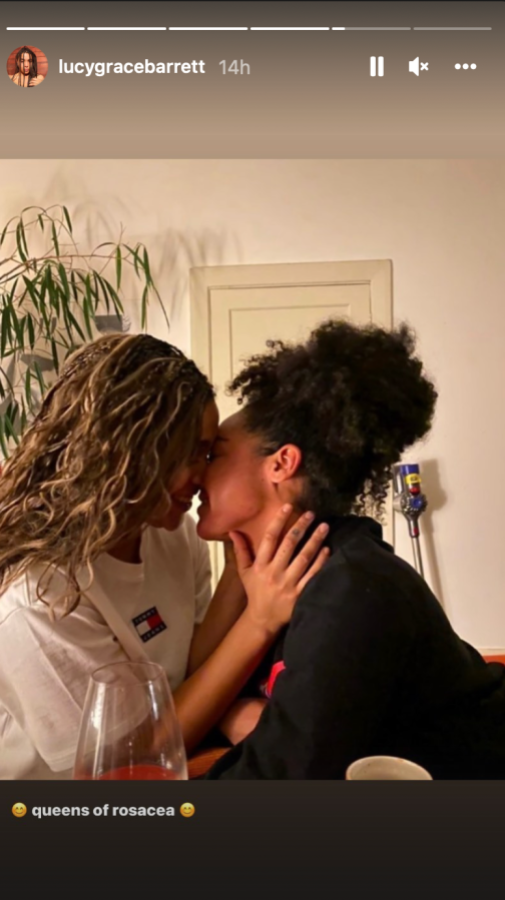 At this point, I turned the entire dossier over to the Autostraddle team (some of the greatest sapphic sleuths on the lesbianternet… see what I did there? Sorry for you, never met a pun that I didn’t love!).

Everyone on our team agreed that this photo is gay.

The oversized glass of wine? Gay.

Soft-launching your new girlfriend with a shot out to a skin condition that leaves you patchy and red? DING DING DINGGGG! dats gay.

If it’s not gay, it at least unequivocally looks gay. If it’s not gay, we very well might be getting gaslight about what’s directly in front of us. Which prompted our newest team member Yash to come up with the new motto that I simply must share with you.

And with that I will bid you adieu.