There’s no greater Monkey’s Paw mistake than wishing for an epilogue for lesbian TV characters who got a happy ending. Sure, you might get another hour or two with them, but at what cost??? (Usually the cost of a devastating breakup at best, or death at worst.) And so, it was with deep trepidation that I pressed play on HBO Max’s Adventure Time: Distant Lands — Obsidian, one of four 45-minute specials that check in on fan favorite characters from the show’s original run. BMO landed in May and focused on, well, BMO. Last week, Obsidian arrived, and promised us nearly an entire hour of Princess Bubblegum and Marceline the Vampire Queen. My fear, it turns out, was unnecessary. Obsidian finally gave the Ooo-loving gays everything they’ve been wanting.

Adventure Time‘s series finale, “Come Along With Me,” finally allowed Marcy and PB to give in to the subtext and angst and smooch on their cartoon lips, and their curtain call saw them snuggled up in bed watching TV together. It was a huge victory for two characters who spent eight years dropping hints about what they meant to each other, and why, and what happened that caused them to have such an intense and antagonistic relationship. Like all of the supporting characters’ storylines on the series, theirs was fractured, moving them forward in time and occasionally revealing something about their past. Obsidian stopped donking around and filled in all the blanks, and with so much care and affection, I still almost can’t believe it happened. 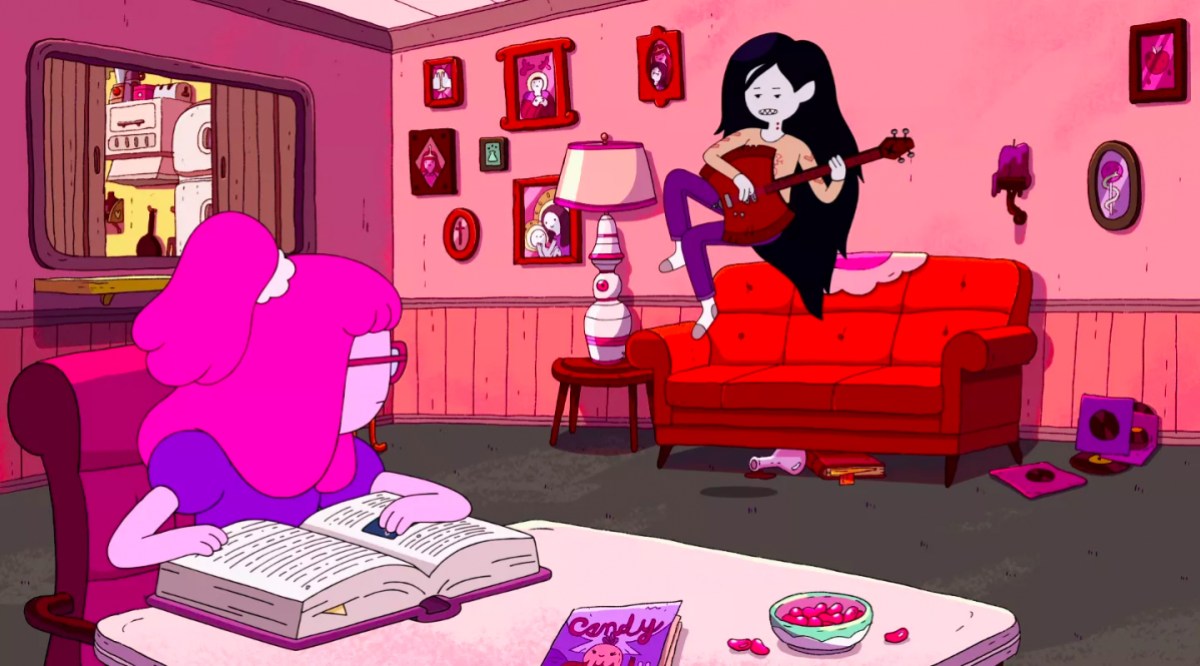 Obsidian opens with three stories: In one, the Glass Kingdom is holding their annual ceremony where they wear masks of “Saint Marceline” and sing the song she sang when she trapped the dragon that was tormenting them in a cave under the city. In another, baby flashback Marceline is on a journey with her mom who’s getting sicker and sicker. And in the third, post-finale Marcy and PB are living a life of domestic bliss: doing puzzles, baking pies, reading books, studying science and working on music, cuddled up on the couch together. They’re still who they are — Marcy’s a little scared of expressing her tender feelings, and Peebs is a control nut with a “boss” coffee mug — but they’ve worked out their differences and are just loving and supporting each other every day. And then! Glass Boy arrives! And begs for Marceline’s help to tame the dragon once again!

To do so, Marceline and Bubblegum have to go on a motorcycle journey through their past, Marceline in more ways than one because the path to the Glass Kingdom leads through the valley where she last saw her mom. It also turns out the Glass Kingdom is where Princess Bubblegum and Marceline had the fight that caused them to breakup and not speak until they ran into each other in the first season of the original series. In present day Glass Kingdom, they confront the dragon, sure, but they also confront who they used to be, and their own personal fears and insecurities, and how scary but also wonderful it is to finally really be together. Marceline also peeps at her past by going back to the fallout shelter where her mom sent her when she was dying and finds the goodbye message she left her there. 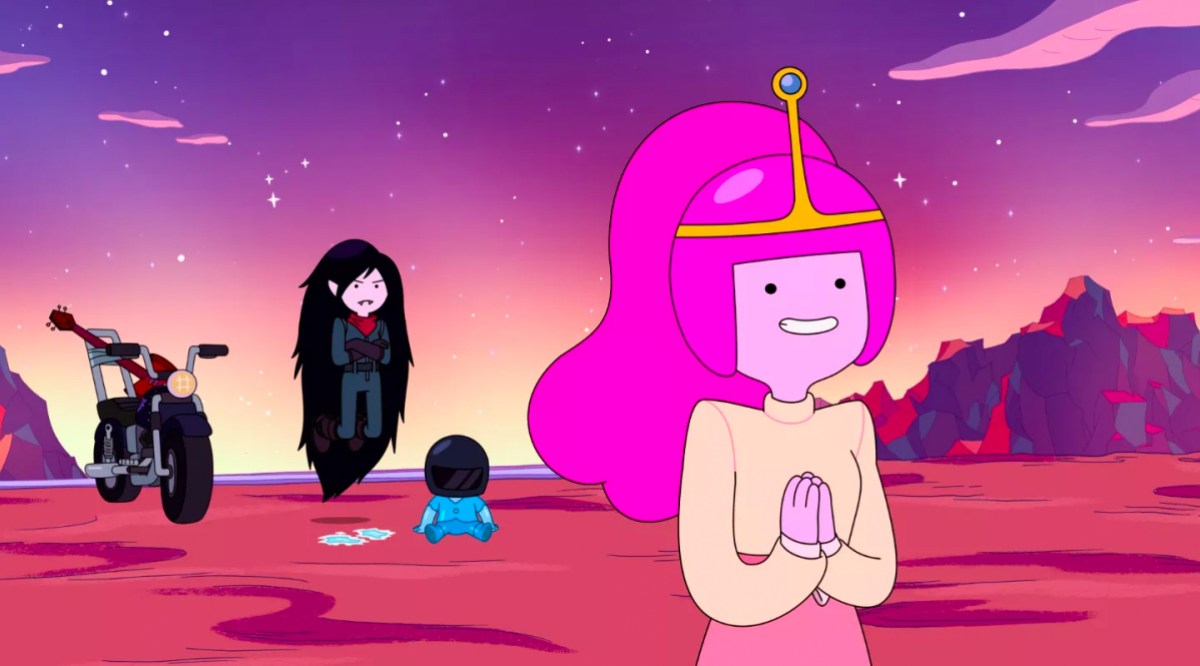 The song Marceline sang to force the dragon into the cave the first time was full of rage after she and PB got into a fight. “So glad that I woke up, I don’t really care about your stupid Candy Kingdom” — which, hilariously, has gotten passed down in the Glass Kingdom as “So mad at the coconut, I’m sick of living in the ocean.” She tries to tap into her past to sing an even more punk rocker song, but it turns out she’s just not that angry anymore. She and PB bicker when they’re trying to work out a plan for fighting the dragon, and end up trapped in the cave with it, but when Marcy finally sings the song she’s been working on, it’s a love song for Bonnibel.

Obsidian fills in all the gaps of PB and Marcy’s relationship, and in probably the greatest gay fanservice scene ever, the episode ends with the couple dancing and Bubblegum confessing that she’s always loved to hear Marceline sing. She flashes back to watching her at a concert when she was just a teenager. Marceline takes off her shirt and throws it into the crowd and PB catches it. If you’ve watched the series, you’ll recognize the shirt. It’s the one Princess Bubblegum sleeps in, the one she gives to the Sky Witch to get Hambo back for Marceline because the Sky Witch trades in sentimental value. 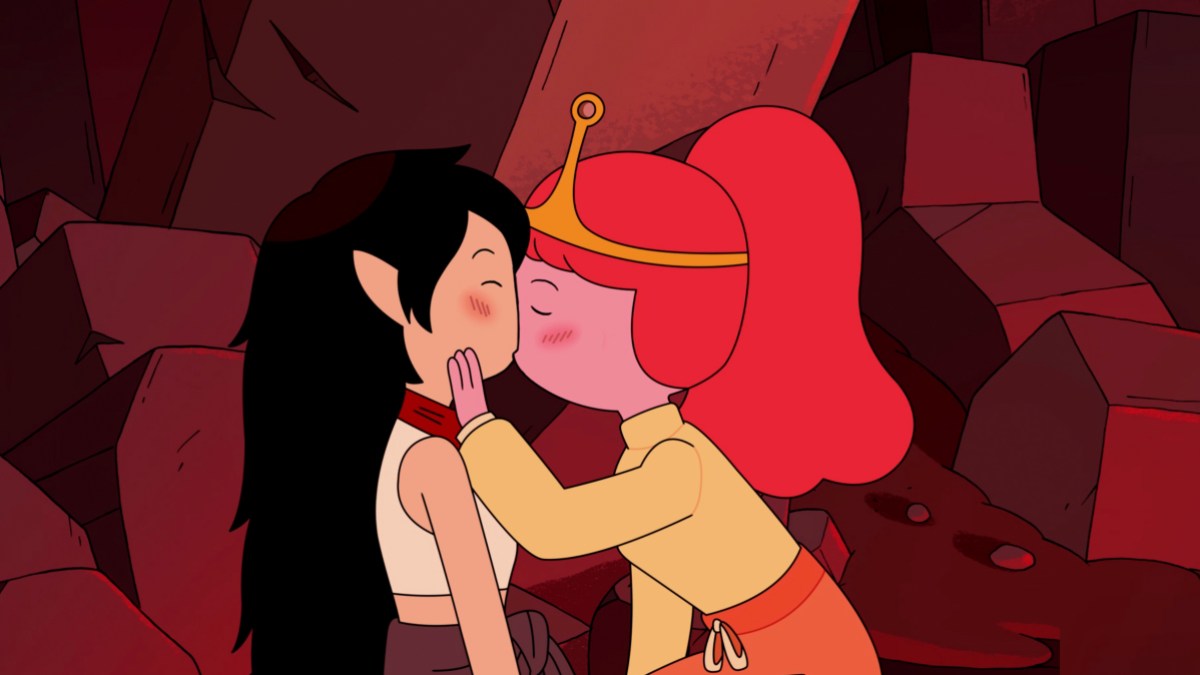 The main question Obsidian asks is: What does it mean to be broken? And how do we fix ourselves? But it’s not just Glass Boy with a crack in his head; everyone in the Glass Kingdom is shattered just a little bit. And Marceline isn’t just who she used to be, or who she is now. Her pain and trauma and anger and her heroism and tenderness and ability to trust are all part of her, and she doesn’t need to be fixed either. Even the dragon is only a dragon because he got mocked as a child for having a cut on his head. We’re all broken in some ways.

If sweetness can win, and it can, then I’ll still be here tomorrow to high five you yesterday, my friends. Peace.