I, Mya, am a magnificent creature. I can tell because strangers wave to me from cars, stoop to pet me every chance they get, and light up when I walk into a room. As a being of maximal floof, who knows my own mind, I am in a perfect position to review my person’s partner. I would like to point out that I have known Nicole for five years and Sadie has only known them for four years, making me a creature of importance.

The first thing I have to say about Sadie is that she took my place in the bed. This was a mark against her. Still, she is small enough that when I do want to be on the bed, I can make sure she scrunches up those legs. That way, I have room to lie down without taking up any of Nicole’s side of the bed at all. I think this arrangement works well for the three of us.

At first, when Sadie started coming around, she did not feed me. This was another mark against her. She should have immediately given me food and, yet, did not. However, she is now in charge of my dinner, so when she enters the kitchen at around 6 or 7pm I am DELIGHTED. Sometimes, often, she doesn’t feed me right away because she must be forgetful or something, so I have to chase after her and boop her butt with my snoot to make sure she feeds me. I know this is okay to do because Nicole also touches her butt. 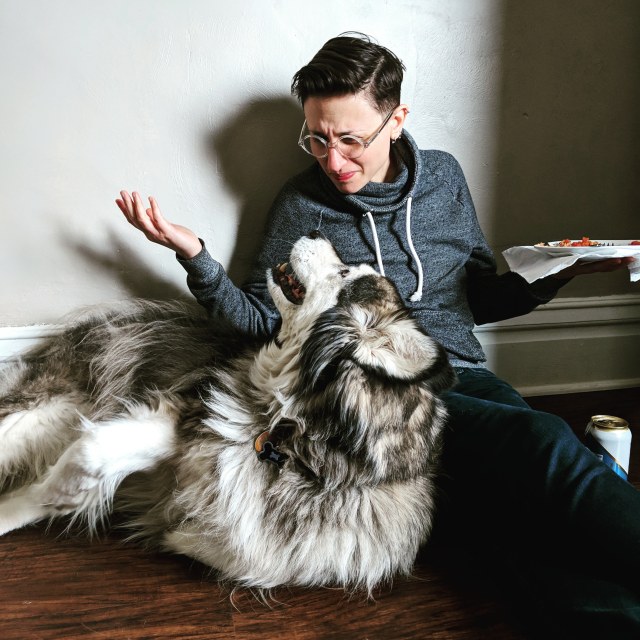 I made MY first move on move-in day, where I decided to see if Sadie would give me some of her meaty burrito. Nicole’s soy-based burrito was not nearly as interesting.

SPEAKING of food, this is an important thing to note about Sadie. Nicole eats many things I like, such as the apple or, in summer, WATERMELON FRUIT FROM HEAVEN. Take me to a cook-out and I will stare at the tray of watermelon until you give me some. Remove those seeds for Mya, though! And whenever I see Nicole or Sadie get the apple out, I open my mouth and grin realllly huge so they know it’s time to pay their apple tribute. I get two slices of every apple eaten in this house. It is the rule. Sadie, however, does something Nicole does not. Sadie. Eats. Meats. Since Sadie has come into our lives, the chance of meats dropping on the floor has increased from zero to some more. Sometimes, Sadie will even make me tiny — TOO TINY — portions of her meats without all the extra salt and stuff she puts on them. Once, Sadie made me a tiny unseasoned hamburger that she grilled, and Nicole made me tiny un-oiled baked french fries, and I lost my mind. Sadie = meats and I love that about her.

Now, having Sadie around DOES mean that I get twice as many pets as I did before. But it also means that when Sadie and Nicole pet each other I get jealous and stare and stomp my little front feet because they look like good pets and I want in! Like this one time, Nicole was giving Sadie REALLY GOOD pets against a wall, and I got all up close to them and smiled and panted because they looked amazing! Now that I’ve lost my hearing, I cannot tell when they’ve snuck off to pet each other, but Mya has her suspicions. More pets for Mya, is what I am going to type right here thank you.

I DO NOT like that Sadie helps Nicole brush me. I DO like that I feel more comfortable nipping at Sadie when she brushes me. I feel embarrassed when I try to nip Nicole, but not with Sadie. I think I feel entitled to nip at her a bit more and growl and hold the comb in my teeth because COMB IS BAD AND BRUSH IS BAD. I don’t know if I’ve ever barked at Sadie, but once when Nicole left and came home and forgot their keys they knocked on the door, so I barked at the door, and then I saw it was them when they opened the door so I ran away in SHAME and EMBARRASSMENT and I HID and I NEVER BARKED AT THE DOOR AGAIN TO THIS DAY.

Before Sadie, it was just Nicole and Mya and that was good and fine. (Except for the fact that we had to live with their roommate that had a mean bully cat who scared the shit out of Mya.) Now, though, we are a PACK. When we go for walks all three of us instead of just two, I raise my tail up higher than on walks with only Nicole because I’m proud of the humans I’ve collected. AND when I get into the car with Nicole AND Sadie most of the time it’s a trip with NEW SNIFFS! It might be a trip to the park or an even longer road trip to more distant sniffs. The really good trips rarely happen without Sadie so she must have something to do with them. Nicole and Sadie even got a funny little ramp for me to get in and out of the car since I cannot jump so high these days, which means even more trips for Mya!

Between meats, pets, and trips — I give Nicole’s new girlfriend four and a half wags out of five. Sadie’s pretty good. I hope she reads this and takes my note about meats, though. BIGGER MEATS AND MORE PETS FOR MYA PLEASE AND THANK YOU.

Mya is a 14-and-a-half-year-old senior rescue dog. She's begun writing in retirement, but previously held the position of Coordinator of Smiles. Mya enjoys walks in NEW PLACES thank you, vacations, lying in snow, eating snow, befriending other dogs' owners at the dog park, being adored, cars stopping to tell her she's pretty, receiving pets, trying to make friends with cats, snacks including and especially apples, and both snow scenes and lesbian sex scenes in movies. She lives with her adoptive parent Nicole, and Nicole's partner, Sadie. You can find photos of Mya on Nicole's Instagram @nknhall. Mya is a Leo.

Mya has written 1 article for us.