Of all the blessings 20gayteen has bestowed upon us, nothing has gotten me quite as hyped as the news that Noelle Stevenson would helm a Netflix reboot of She-Ra. I’ve been a fan of Stevenson’s since she was posting slash fan art for free on Tumblr, and only grew to admire her work more through Nimona and Lumberjanes. And I’ve been a fan of She-Ra since — well, since forever. She was my introduction to women warriors! Up until I met her, I only ever liked “boy” toys because that’s the only way a little girl like me got to play with swords and lasers and wear cool armored costumes. I knew She-Ra for years before I was even introduced to Wonder Woman. (She-Ra came out in the spring of 1985, when Wonder Woman was getting turned to clay in DC’s Crisis on Infinite Earths, after which she remained literal dirt for an entire year before regaining her human form and returning to the comic book world.)

She-Ra came to me through my sister, Jenn, who liked fashion and ass-kicking. Jenn got the She-Ra action figure and the She-Ra castle and She-Ra’s trusty unicorn steed, Swiftwind. She took turns riding She-Ra around on Swiftwind and riding She-Ra around on the beast form of her arch-nemesis, Catra. (My sister’s queer too.) She-Ra toys came with a brush and a weapon. One minute, Jenn was fixing She-Ra’s hair; the next, She-Ra was running Ken through with her jeweled sword. (He stole Barbie’s Camero.) It wasn’t long before I was begging to play with She-Ra and then devouring the cartoon and saving my allowance to buy her gear at K-Mart. She-Ra wasn’t like Jem of the Holograms, or Smurfette, or any of the other cartoon girls I saw on TV.

There’s been plenty of kerfuffle this week about Stevenson’s redesigns of the characters — which, by the way, are awesome — and it might have led you to believe that the original She-Ra is a just relic, a corseted victim of misogyny who was erased from the He-Man universe after her show was cancelled because Toys R Us couldn’t figure out which section to put her toys in. But nothing could be further from the truth! She-Ra was a gateway into feminism! And it holds up, even today! It’s not perfect, of course, but it’s honestly still revolutionary.

Here are the eight most feminist things about the original Princess of Power. 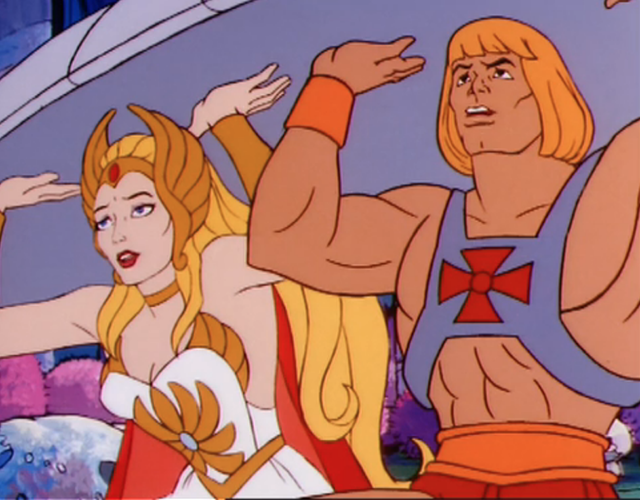 She-Ra was a warrior, even before she became She-Ra. (She was kidnapped as a child by the evil Hordak, and ultimately became the leader of his army because she was such a badass.) He-Man was muuuch more muscley than her, but she was just as strong as him, and as fast, and as agile, and as skilled at fighting. Plus she was smarter, and more empathetic, and her sword — which was the same size as his in the cartoons, though slightly smaller than his action figure’s — had an extra jewel and could turn into literally anything. A parachute, a rope, a torch, a magnet, a boomerang, handcuffs, a shield, a bow, a… space helmet. When He-Man wasn’t He-Man, he was the simpering Prince Adam. When She-Ra wasn’t She-Ra, she was still a competent, capable fighter named Adora.

2. And she had a tougher mortal enemy. 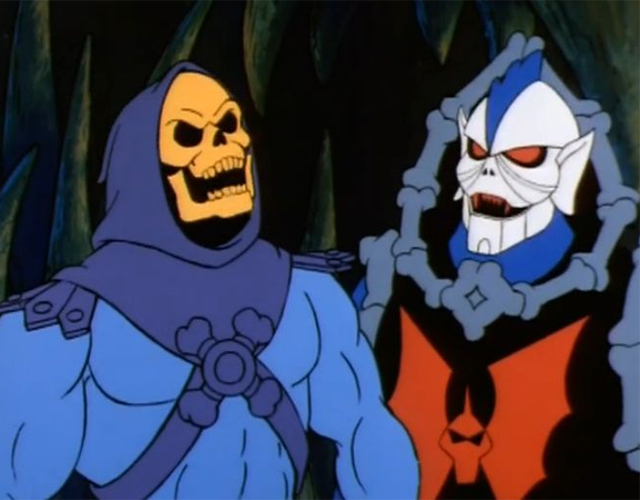 He-Man’s arch-nemesis, Skeletor, was a buffoon. He spent every episode trying to figure out how to take over Eternia and failing like a coyote trying to catch a roadrunner. She-Ra’s arch-nemesis was a fascist dictator named Hordak who already ruled Etheria with an iron fist, an enormous army (that included a variety of robots and tanks), and a merciless temper. In fact, he allowed Skeletor to look after his ship one episode when he had to go off to do whatever dictator business, and Skeletor wrecked everything.

3. All of the humans in She-Ra’s Rebellion were women… 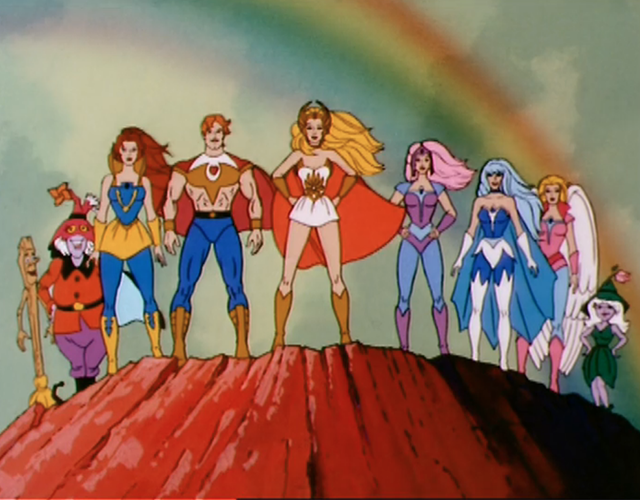 There’s actually never been another leading female cartoon character with a cast of supporting female characters as big as She-Ra’s. And they really did call themselves “The Rebellion.”

4. …except one man named Bow, who was a constant damsel in distress. 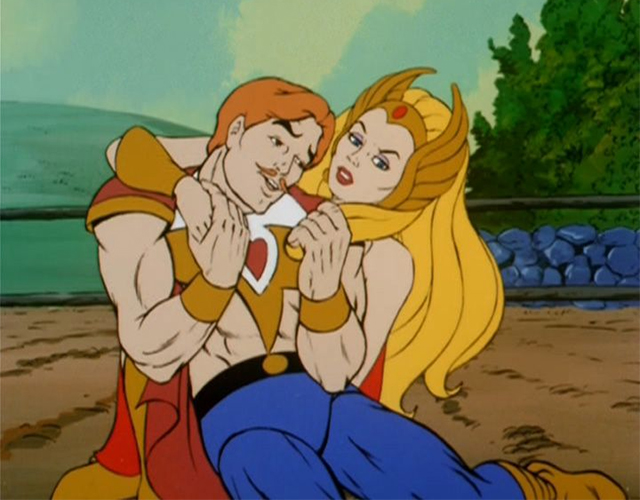 Bow gets captured basically every time She-Ra takes him anywhere. Usually he just sits in his cell and sings until she arrives to rescue him.

5. She-Ra’s gal pals all had cooler powers than any of He-Man’s friends. 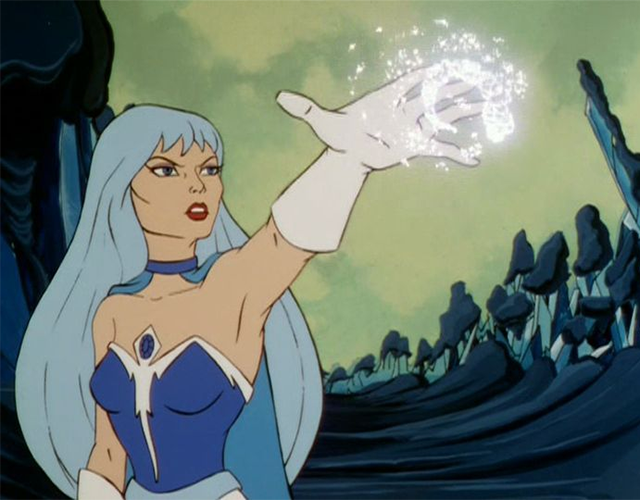 There’s Queen Castaspella, who is a sorceress; Flutterina, who flies; Double Trouble, who can disguise herself as anything; Queen Frosta, who shoots energy-like chill beams from her hands; Princess Glimmer, who manipulates light; Madame Razz, who casts silly spells; Mermista, who controls water and sea creatures; Peekablue, who has super-sight; Perfuma, who controls plants; and on and on!

6. The Rebellion existed to install a matriarchy on Etheria. 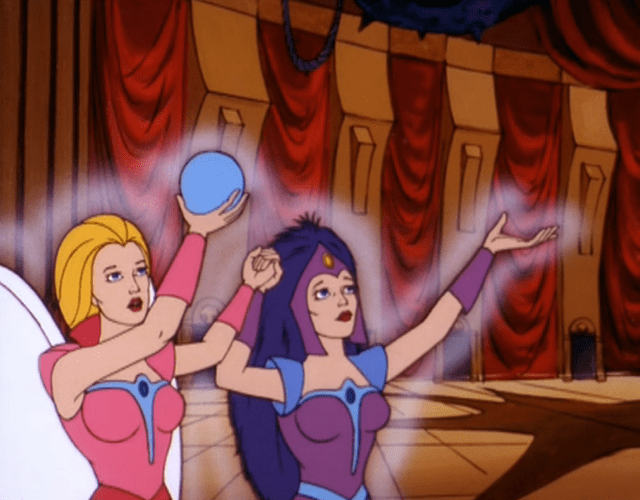 Queen Angela is the rightful ruler of Etheria. There is no king! A king is never mentioned! Her throne was stolen by Hordak, and She-Ra and her Rebellion are fighting to reinstall her so she can bring the qualities of female leadership back to the planet. (Fairness, compassion, cool-headedness, etc.) Etheria before Hordak was Themyscira (but with men who were never victims or perpetrators of toxic masculinity). 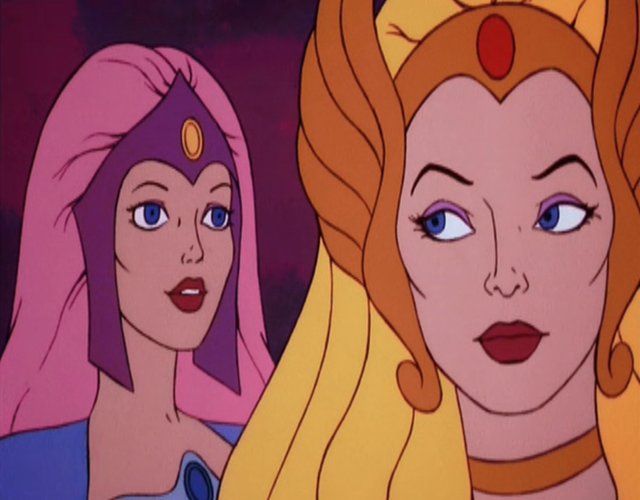 Every episode of She-Ra features She-Ra talking to at least one of her other lady friends about basically anything besides boys (unless the boy in question is Bow, and she needs to talk out a plan to rescue him — again).

8. She-Ra and her friends were action figures, not dolls. 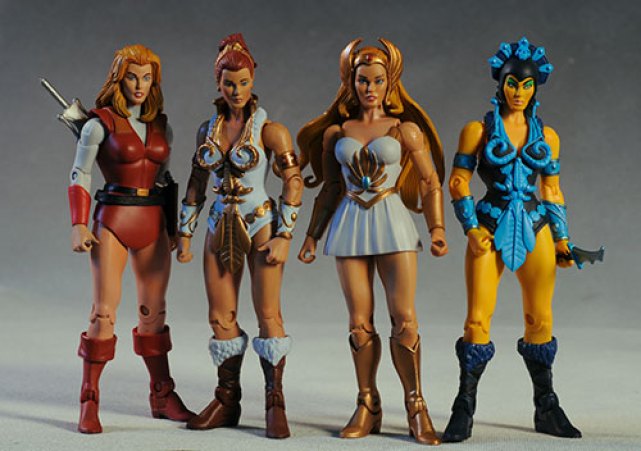 It’s actually one of the reasons the series only lasted two seasons. Mattel did not want She-Ra shelved with Barbie, but toy stores didn’t have any other toys in the “girl” section that were made for fighting fascism, and they sure as heck weren’t going to mix girl dolls in with Han Solo. She-Ra and her many many many friends were shoehorned in between pink boxes of dolls that existed to teach girls to be moms and wives. Boys weren’t looking on the Barbie aisle for action figures, and girls weren’t used to buying action figures.

She-Ra never really did anything gay, but, like all powerful women who had a secret identity, she became a gay icon over the decades. I feel very confident that under Noelle Stevenson’s watch, in this new world where Steven Universe just hosted a queer wedding, there will be plenty of LGBTQ moments to celebrate in the new series.