Max and Caroline are given the once in a lifetime opportunity to audition for Sophie’s cleaning service. When the two roommates begin to take the other’s extensive skill set for granted (baking cupcakes using a box mix, paying for a website), they end up getting into some sort of arm-grabbing scuffle because nothing says “I want to do you bodily harm” like a good choreographed arm-grab. It’s only after Caroline saves an overdosed male model does Max recognize that it’s moments like those that she needs a former rich kid around. 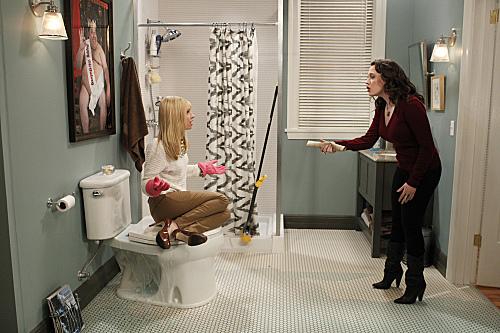 Caroline: Watch out ladies. I’m about to go ham on this b-room.

Caroline: Move over. I wanna slide in close to you so we can take the picture for our new website.
Max: Look, if you wanna get all lesbian with me just go for it. You don’t have to pretend it’s for the website.

Max: She wants to do it for money to pay for our website and I want to do it because I like rummaging through strangers’ medicine cabinets.

Sophie: I smoke for seven years then quit when I was twelve. I didn’t want to die of lung cancer before I was teenager.

Max: This is silly. If I’m gonna suck on something this hard and get no pleasure out of it, I should just date.

Max: In my experience when someone has to tell you they’re all the way in, you better hope their tongue works.

The “is that racist” joke

Max: How can you be so good at Spanish, but so bad at cleaning?

Apparently Oleg has met his match in Sophie. She showed him who’s boss by grabbing his junk. I too have found that’s the best way to deal with sexually perverse men.