Last week, I mentioned that Spanish food and I don’t really get along. To illustrate my point, I took a picture of the fruits and vegetables section of my grocery last time I went shopping. 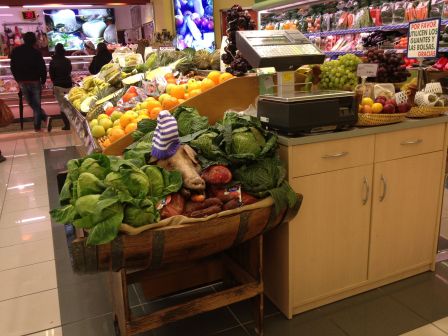 One of these things is not like the other

Spanish people are obsessed with pigs. There’s just no getting around it. Galicians in particular also seem to have a borderline-abnormal fixation on plastic bags. Because I am Captain Planet (and also just because I hate when I have a lot of groceries and my bag breaks on the walk home), I always bring my own bags. Unfortunately, the ladies who weigh your produce at the frutería don’t like it if you try to put your onions in your own bag because it’s “unhygienic” (this coming from a people who think it’s totally 100% no big deal to put a severed pig’s head in a pile of lettuce).

So anyway, lunch! This week I invited my German friend Julia over to make lunch with me because it’s Carnaval so all our friends were glamming it up in the Canary Islands and also because I like her a whole lot. Cooking lunch for the week is a whole lot easier when you have someone cooking with you. Not only does it mean half as much chopping, for this particular menu it means you get done faster because one person can roll the pita/falafel while the other cooks them. 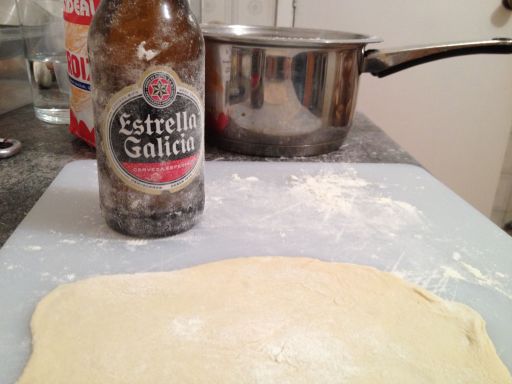 1. Dissolve the sugar and yeast and let it sit for ten minutes to rise.

2. Mix in the salt, olive oil, and flour until you have a shaggy dough. Now knead the dough for 10 minutes on a (heavily) floured surface and then let it rise for 1 to 2 hours.

3. Pinch of a small amount and, using flour (and not oil) to keep it from sticking to your rolling pin/beer bottle and surface, roll it out as thin as you can get it.

4. Cook in a dry skillet on super-duper hot. It’ll only take a couple seconds to cook and then when you flip it it should puff up like a pita!

+ Storage and eating: Store flat on a plate covered in plastic wrap or in an airtight container at room temperature so that the bread doesn’t get hard and break when you try to fold it into a sandwich. 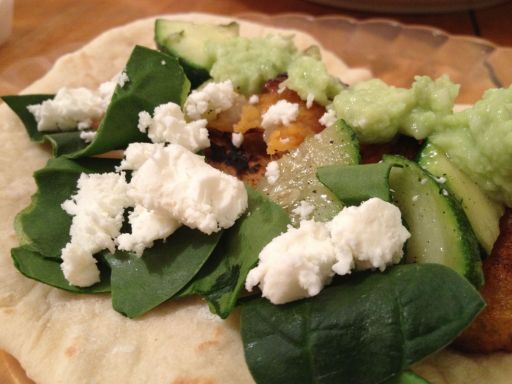 Ingredients:
2 sweet potatoes OR 1 sweet potato + 1 cup of chickpeas
2 cloves of garlic
1/2 of an onion
1 c of chickpea or regular flour
2 t of cumin
2 t of garam masala
2 t of pepper
1 t of paprika
1 t of salt
2 big handfuls of fresh cilantro
juice from 1/2 a lemon
olive oil

1. Chop the sweet potatoes into 4 pieces, cover them with olive oil, and then roast at 350° until they’re soft. For me, that took about half an hour.

2. While you’re waiting for them to cook, chip the onion, garlic and cilantro.

2. Once the potatoes have cooled enough to touch them, peel the skins off with your fingers and then mash the insides.

3. Throw the aromatics, flour, spices, cilantro and lemon juice into the mashed potato bowl and mix everything together.

4. Put the mixture in the freezer for 10 minutes or so so that it’s easier to form balls or patties.

5. Now you’re ready to cook. You can either bake, fry or deep fry your falafel.

To fry them, heat olive oil up over high heat, form patties, fry one side and then the other.

To deep fry them, heat olive oil up in a deep pan. Form balls out of the dough and fry them until they have a crispy coating.

+ Storage and eating: Store in an airtight container in the fridge. Take your falafels out of the fridge (but keep them in a container) the night before so that they’re not still cold at lunch. You can either assemble the sandwiches the night before or take a few containers each filled with pita, falafel toppings (I did avocado, spinach, sautéed zucchini and feta cheese) and make your sandwiches at lunchtime to avoid any potential sogginess.