The only time I ever saw my sister cry about TV was over the Doctor Who spin-off Torchwood, which casually and callously murdered fan favorite Ianto Jones after spending nearly a year promoting his bisexual awakening and relationship with Captain Jack Harkness back in 2009. She didn’t just cry; she bawled. Sobbed until I thought she was going to be sick. She was coming to terms with her own bisexuality, and it was the first time her heart had been punched in the guts when it came to queer rep. I should have warned her, grizzled old lesbian wood witch that I am, having lived through a cool 215 dead lesbian and bisexual TV characters in my life — but Ianto and Jack made her so happy!

Doctor Who has been especially terrible with murdering its LGBTQ+ characters over the years: Ianto, Tosh, Bill Potts, River Song, Jenny and then not-Jenny, and a whole host of gay guest characters who say they have same-gender partners and then immediately get run through by some Cybermen or Reapers. Equality! 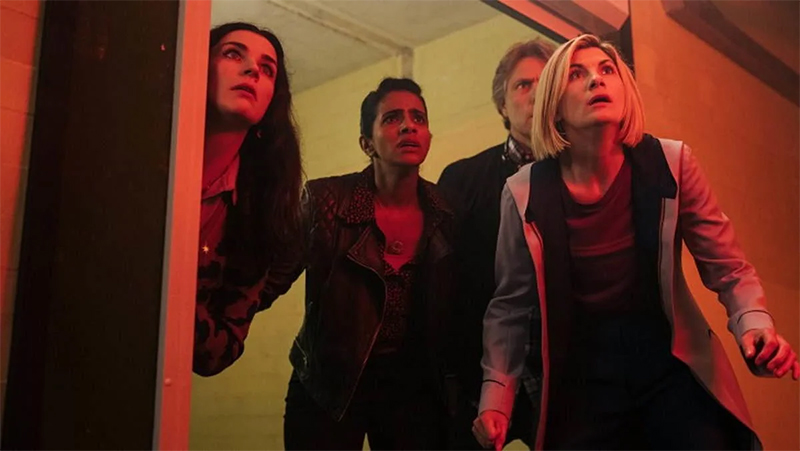 Anyway, the point is that I do not trust any Doctor Who writers, and it is with deep trepidation that I’m letting you know that one of my main dreams recently came true: Yaz finally admitted that she’s in love with Thirteen. It’s something the show’s been messing around with since Jodie Whitaker donned her time-traveling suspenders and hooded cloak back in 2018, and Yaz reluctantly, tardily said it out loud in the New Year’s Day special, “Eve of the Daleks.”

Dan, played by John Bishop, who also played Emily Fitch’s dad in Skins and looks shockingly like my college boyfriend, watches Yaz watching The Doctor and asks, “You ever told her?” Yaz makes a face like “ever told whomst what, good sir!” but then sighs and wonders “Is it that obvious?” Dan says it might not be obvious to a “good-hearted weirdo” (speaking for good-hearted weirdos everywhere: IT IS), but yeah, it’s pretty clear. Yaz says she’s never told anyone, she’s hardly even discussed it with herself, but after the events of Flux, which led into the New Year’s Day special, it’s getting harder to ignore. Their longing looks are getting, well, longer. And Dan thinks The Doctor knows, which is why he later outs Yaz, telling The Doctor that Yaz likes her (like likes her).

The Doctor kinda tries to pretend that she doesn’t know what Dan means and doesn’t reciprocate Yaz’s feelings anyway, but she clearly does (to both). At the end of the episode, she looks over at Yaz looking up at the glowing night sky, has an “oh fuck” realization, and looks away. 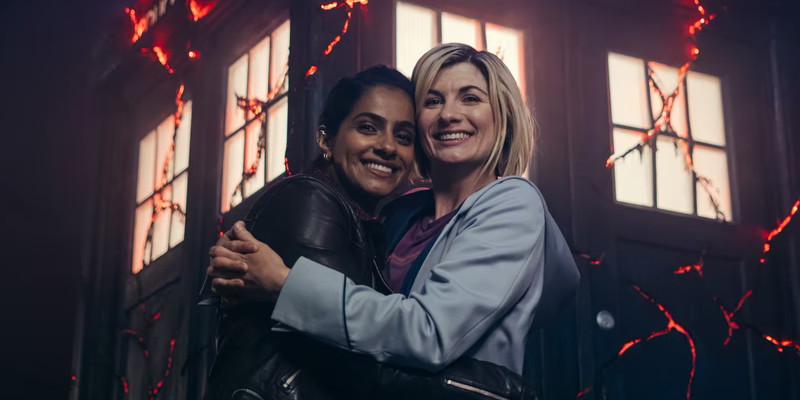 On the one hand, Yaz saying the thing that’s been apparent for so long — and really being one of the first characters in history to actually say the thing, instead of having writers ignore the chemistry between two women on-screen while queer audiences gnash their teeth in frustration — was heart-poundingly satisfying. On the other hand, where’s it gonna go? Jodie Whitaker’s time as The Doctor is almost up. Their chemistry has been pretty much side-stepped for the past two-plus years, and it seems unlikely there’s going to be any real time to explore what their feelings mean when there’s Sea Devils afoot, and only two more specials left!

You’re never going to get a really HAPPY ending when you’re a companion of The Doctor, especially not if you fall in love with The Doctor — just ask Rose, who fell in love with more than one Doctor! — but sometimes, if you’re straight, your feelings will at least get a whole lot of exposure. At this point, I just want Yaz to stay alive, and maybe for The Doctor to acknowledge, even in the smallest out-loud way, that she’s got more-than-friends feelings too.

After all we’ve been through, it’s the least the Whoniverse could give to us!