Previously on Wynonna Earp, Nicole made a deal with the Clantons that made her start puking up frogs and trying to kill her friends, Rachel’s crush Billy got turned into a reaper, Wynonna and Doc found Rosita on a rock, and Nicole cuffed her girlfriend to a bed so she could go get some exorcise.

This episode begins just a little while before the last episode ended, giving us a sneak peek into what Nicole, Jeremy, and Nedley were up to before Waverly walked in. They set everything up and work out a plan; Nicole is just going to die a little, and her consciousness is going to hang out in a frog for a bit until the curse registers her as dead, then they’ll warm her up and all will be well. Nicole even very specifically asks Jeremy to hold her down if she tries to come up. 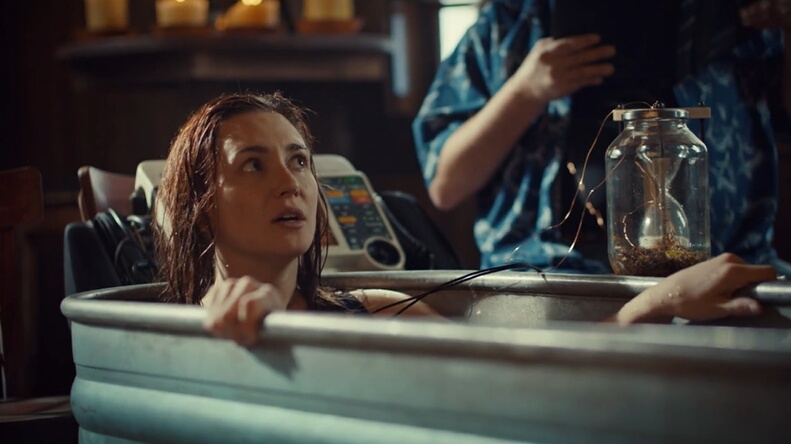 Always good to have an accountability buddy.

Nicole is trying to make frog jokes with Jeremy but her real feelings slip through when she is giving herself a pep talk about why she’s doing this. She wasn’t willing to risk this extreme measure when it was just her throwing up frogs. But now that she knows she was attacking people? Setting houses on fire? She’ll do anything to protect the people she loves. Anything.

And so she goes under, the heart monitor speeding up a little right before she takes the plunge, and Jeremy does have to hold her down when her survival instincts kick in. The monitor flatlines and Nicole goes still and of course that’s right when Waverly busts in, part of the bed frame hanging from the handcuffs on her wrist, demanding to know what the hell is going on. 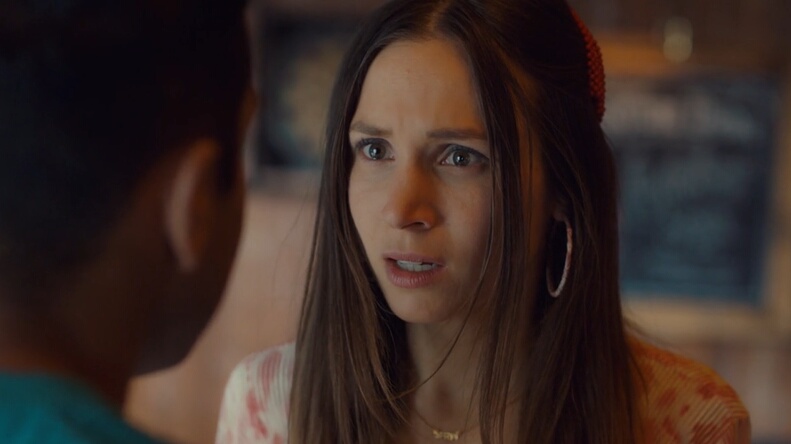 “Okay but is this going to be like how Amy was a rat for like five seasons or?”

Jeremy does his best to explain the situation but frankly “your girlfriend is currently inhabiting a frog” isn’t the most comforting thing a girl can hear.

At Magpie Ranch, Mam Clanton sees that her trusty Curse Frog isn’t looking so hot and knows Nicole is trying to mess with their deal, so she uses her blood and an old newspaper clipping of Waverly winning Nicest Person in Purgatory to send Billy the Reaper after our sweet angel.

And Rachel sees the whole thing. 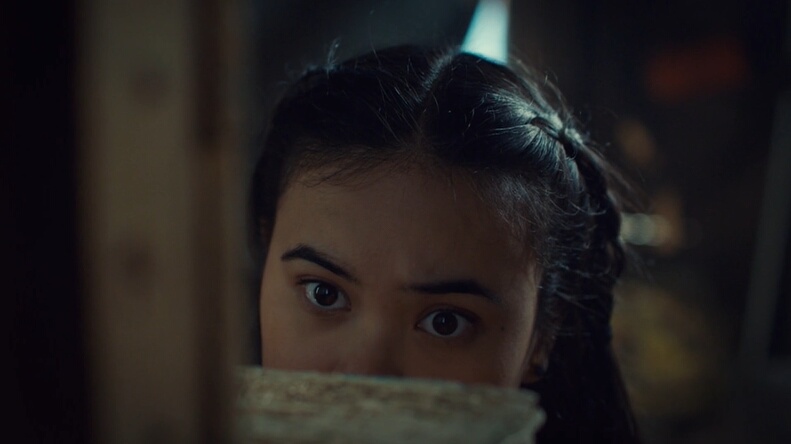 Me reading a tweet thread I’m not involved in but I’m INVESTED in.

Meanwhile, Wynonna and Doc are out at Steve Gulch reckoning with the fact that the scorned woman they were sent to fetch is Rosita. Rosita assumes that Wynonna being there means Wynonna killed all the other revenants and she’s there to kill her last, just like she said. But as gung-ho as Wynonna is to kill the woman who tried to steal her baby practically from her vagina, that’s not why they’re here; plus, they need her alive. They ask how she even got to this rock, and she tells them that she slept with Creepy Phil’s wife and he sent a mob after her so she ran to the gulch because she heard Revenants didn’t like standing on it, but she has a high tolerance for pain. But then there was an earthquake and all the Revenants started to poof away, except her and Phil on the rock, which didn’t hurt them anymore. One day Creepy Phil got… well, creepy, and Rosita shoved him off the rock, and he got disappeared, too. So as much as she’d love to, she can’t leave the rock. 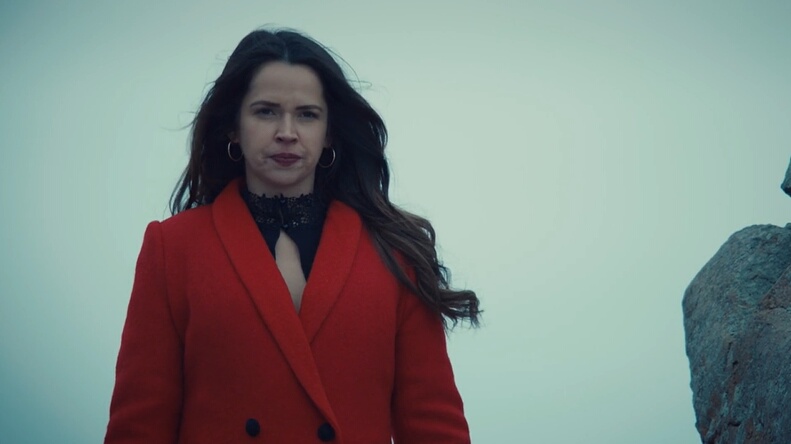 Back at Shorty’s it’s finally time to put Nicole’s consciousness back in her body and wake her up/bring her to life when suddenly the door swings open and a familiar-looking demon rock appears in Waverly’s hand. Billy the Reaper comes in. 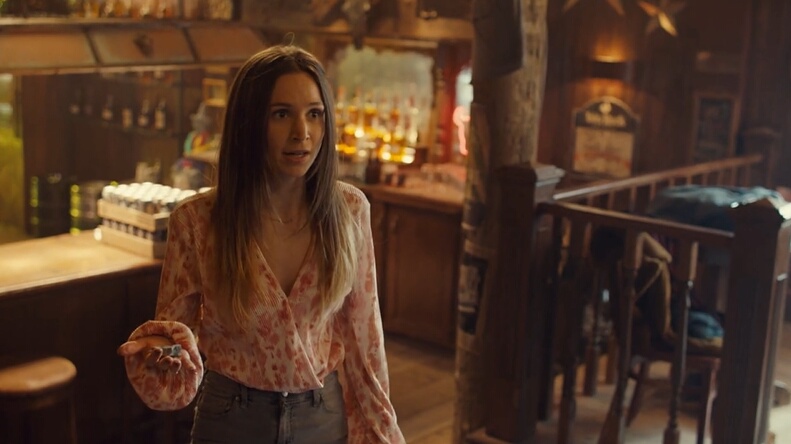 Worst game of hot potato ever.

Waverly screams and starts running around but Jeremy and Nedley can’t see the reaper, so it takes a minute for them to understand what’s happening, and in the hubbub, all of the frog containers spilled and everything is a hoppin’ mess. Nicole uses her little frog legs to hop toward Waverly and when she realizes her girlfriend is in real danger, she disobeys Jeremy’s very strict instructions to stay in the frog at all costs and wooshes out to knock the reaper down the stairs. She’s no longer a frog, she’s a glitter ghost. 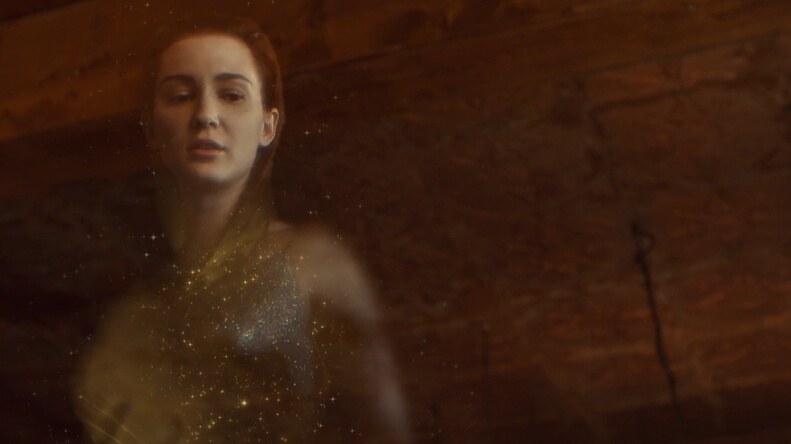 Out at the gulch, Wynonna realizes that the rock has ammolite, and figures since the curse ended, its effect on revenants flip flopped. They find some stones to make a path for Rosita to hop all the way back to the sanctuary but before she goes too far, Rosita wants them to pink swear that if she goes with them, they won’t hurt her. 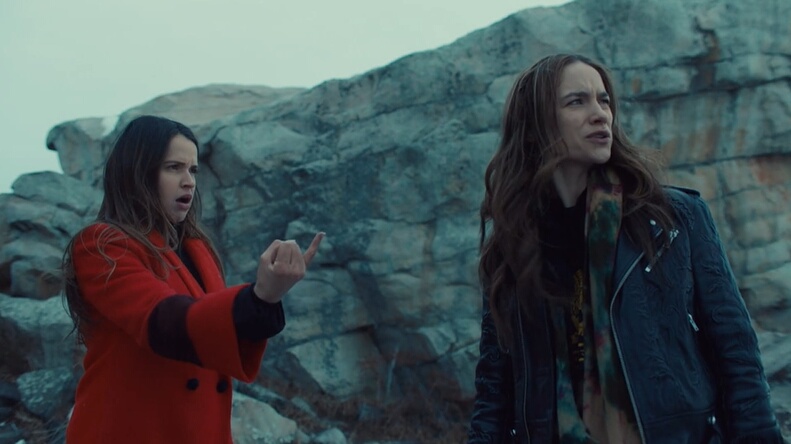 Me, an adult human lady, making my friends promise they’re not mad at me.

Once she’s convinced she’s safe in their hands, she hops off the rock and is delighted to find she doesn’t cease to exist. The Celtic knot symbol appears as a shortcut that they probably wish they knew about eight ammolite stepping stones ago but Wynonna and Rosita go through, leaving Doc behind.

At Shorty’s, Waverly is channeling her inner Disney Princess and kissing frogs to see if true love can break a curse. 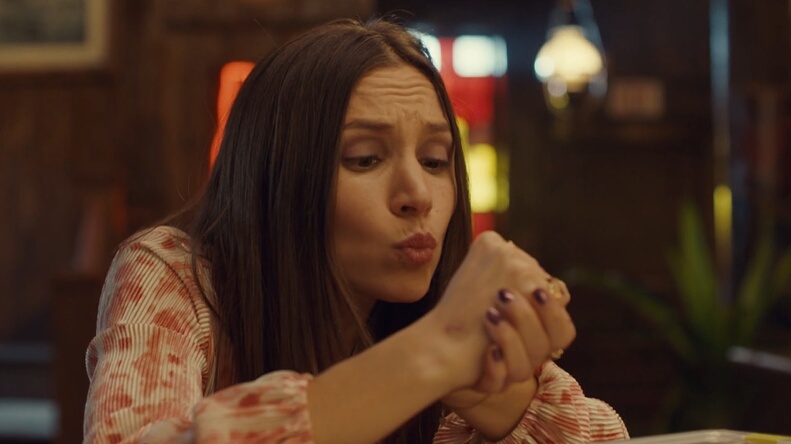 “There’s been trials and tribulations, you know I’ve had my share. But I’ve climbed a mountain, I’ve crossed a river, and I’m almost there.”

But Nicole is still a Glitter Ghost and doesn’t know the rules (or why she’s wearing formalwear) so she can’t get her girlfriend to stop kissing amphibians.

When Wynonna and Rosita get to the nunnery, Rosita is pissed to learn Wynonna plans to trade her in for Peacemaker. What are they going to do with her? Wynonna didn’t ask and doesn’t care, and she’s handing her over to a bunch of nuns so how bad could it be? 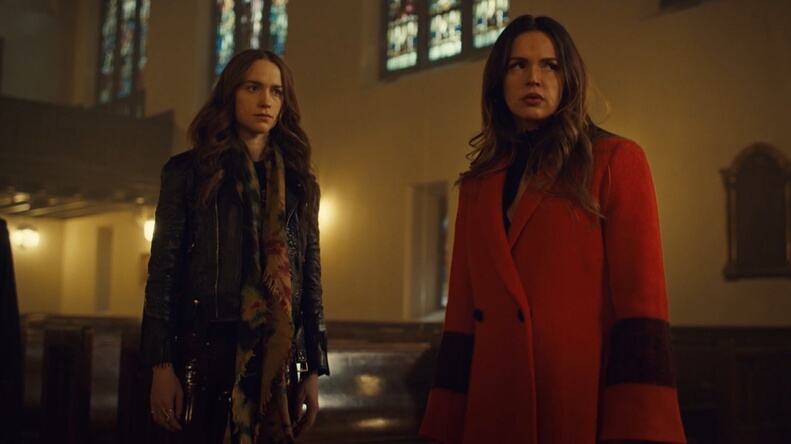 Mother Superior starts to revel in their banter and at first I thought she yelled KISS KISS KISS but then I realized that was me and actually she said FIGHT FIGHT FIGHT. Wynonna tells her that they have their beef but she’s not going to kill her, but then Rosita attacks. They wrassle a bit, the nuns egging them on, and Rosita says she can’t not fight for her life. She’s pretty great at not dying, and she’ll do what it takes to survive. Wynonna gives in and figures this will at least be cathartic and stops holding back.

Meanwhile, Waverly is still kissing frogs and Nicole is starting to worry that she saved her from the Garden just for her to die from salmonella, so she shoves her ghost arm into the light switch and starts flashing the lights in Morse code. 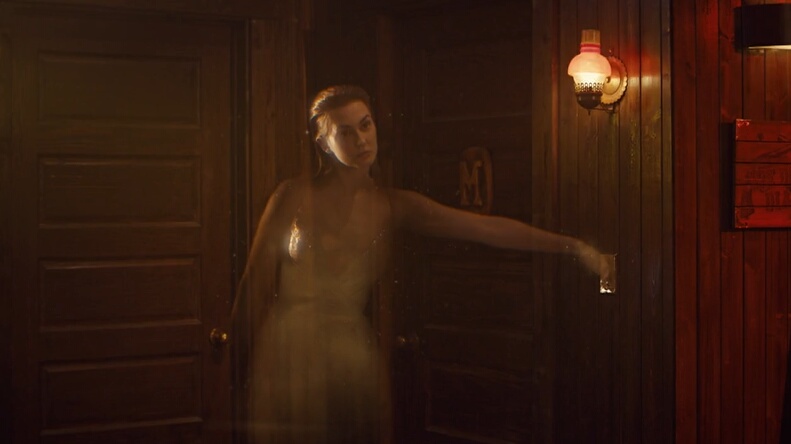 I fully intend on sassing my friends via Ouija board when I’m a glitter ghost.

Luckily because they’re adorable nerds, Jeremy and Waverly both know Morse code, so they figure out that Nicole is no longer in a frog and also wants them to follow her down to the basement. Nicole possesses Billy the Reaper and tries to use his voice to get him to tell Waverly what happened and how to fix it. Waverly and her Harley Quinn baseball bat are also getting fighty, saying he better give her answers because she’s starting to get angry, and she doesn’t know what will happen if she gets angry. 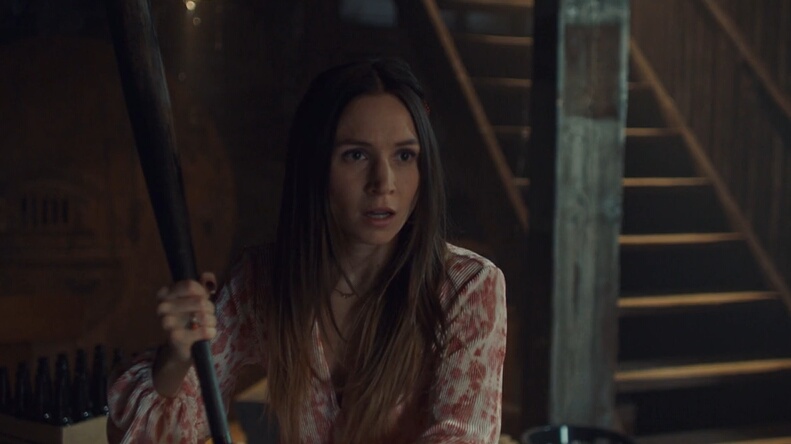 Well now I need a WayHaught as Harley Quinn and Poison Ivy fanart.

Between Nicole and Billy, they learn that Nicole made a deal with Margo because she was desperate to get Waverly back. She didn’t know they were Clantons at the time, she only knew of Margo as the Swamp Witch. Also, the only way to break the covenant is when both parties are dead. Waverly figures now with Nicole’s body being dead there’s only one thing left to do and she storms off, ignoring Billy’s threat that “we are many.” Glittery Ghost Nicole hangs back and asks how many, but he just snarls at her.

And then Waverly takes charge in a way we haven’t really see her do very often. She is sure and determined, focused and FUMING. She goes to the tub and takes Nicole’s cold, cold hand, kisses it gently. 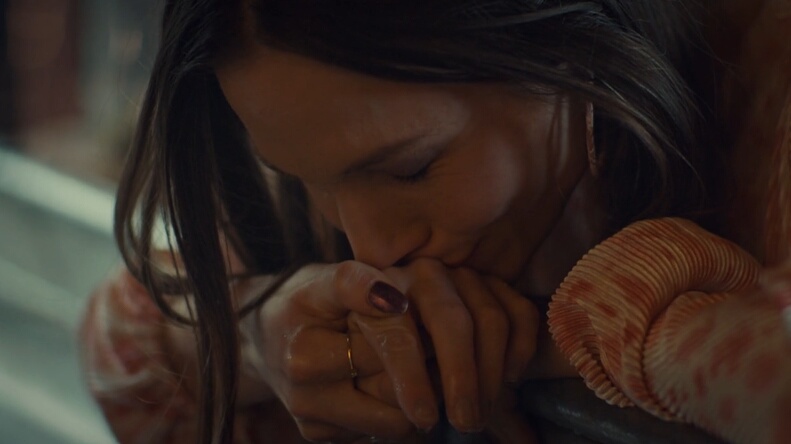 “You’ll be alright, no one can hurt you now. Come morning light, you and I’ll be safe and sound.”

Waverly’s voice gets dark and husky and she says, “You saved my life. Now it’s my turn.” She tells the boys to stay and watch Nicole, grabs a shotgun and storms out the door. No more miss nice(st) Waverly.