If you frequent the queer meme-verse and social media circles, you may have noticed that the word “sapphic” is having a moment. But what is driving the seeming renewed popularity of this adjective formed from the name of Sappho, our most iconic Greek lady-loving poet? When Autostraddle EIC Dr. Carmen Phillips asked for an explainer recently, my language-nerd ears perked up: a challenge at the confluence of queerness and etymology, two of my favourite things! I started becoming aware of this trend maybe two or three years ago, and I had a hunch about what linguistic niche it was trying to fill. But anecdotal language impressions are notoriously unreliable, so I decided to do some investigation. What does “sapphic” mean these days and is it actually having a resurgence? And if so, why?

An example of a sapphic meme in the wild

In order to see where “sapphic” is headed, it helps first to look back at its history. The adjective arose in English around 1500 to describe Sappho’s poetic metre and style. The mainstream modern sense referring to attraction between women started catching on in the late 1800s, after the discovery of some of Sappho’s lost papyrus manuscripts that tickled the fancy of the Parisian literati. Since “bisexual” wasn’t commonly used or recognized until the 1950s, it’s not clear whether this new sense of “sapphic” originally included all women who loved women, or only those who exclusively loved women. But certainly by the mid-to-late 20th century, lowercase-s “sapphic” was essentially a synonym for “lesbian”. This is still reflected in most major dictionary definitions, and even here on Autostraddle in a “More Than Words” article from 2012:

No one really uses the word “sapphic” anymore. I understand why – it has an air of exoticization about it, and its roots, which seem at first glance so straightforward, are pretty twisted when you trace them back. The best-known legend about Sappho has her pining so hard for a man she throws herself off a cliff, which tangles the common modern connotation of “sapphic” to mean “lesbian” and not more broadly women’s attraction to other women.

Nine years on, let’s take a look at what has changed.

(Fair warning, there’s a metric fuckton of nerdery ahead, so if you just want to know the answer to the main questions already, feel free to skip all of this and jump down to “TL;DR” at the end!)

Is There a “Sapphic” Comeback?

The answer is – kind of? There’s definitely been an uptick – the Google Books Ngram Viewer (a search engine that charts word frequencies in Google’s text corpora) shows a notable spike in frequency around 2014, but whether counts as a comeback is debatable. It’s also worth taking into account that “sapphic” has been nowhere near as frequent as “lesbian” at any point in the last 40 years. This search engine only accounts for books, though, which tend to lag behind when it comes to linguistic trends that originate in more informal settings.

If there is a bigger trend happening, it’s likely happening on the internet, but researching and quantifying informal word usage across the whole web is beyond my armchair-linguist capabilities. The NOW corpus at english-corpora.org does show an increase in “sapphic” frequency in online news articles from 2017 onward, with a particularly big spike in 2020. There is unfortunately no similar database that would account for social media usage.

In the absence of substantial hard data regarding online usage, I did what any rigorous and credible researcher would do — I asked my queer internet friends to fill out and distribute a survey for me.

How Are (Some) People Using “Sapphic” These Days?

Many disclaimers are needed before we do a deep dive into the survey results: 1) I am not a statistician; 2) the sample size is fairly small; and 3) it is composed of people connected to some degree with my social spheres on WhatsApp, Discord, and Facebook. These results are really only a snapshot of how some people in some circles use the word — they may hint at possible explanations for its renewed popularity, but should not be taken as definitive.

Let’s start by taking a look at the demographics (note that respondents could tick more than one box for the first two questions, so the results don’t total 100%). Of the 112 people who responded:

My aim was to find out in what contexts people use the word “sapphic,” what they mean by it, and what they think other people mean. I also wanted to find out whether those answers varied by demographic category. Here are some of the outcomes! (I’m only going to report results for the lowercase-s “sapphic” definitions here.)

For the question “In what contexts do you use the word ‘sapphic’?”, the most popular reply, at 60.7%, indicated that people use “sapphic” mainly to describe events or behaviours, such as “a sapphic relationship” or “sapphic movies”. This surpassed its use both as a descriptor or identity for people (36.6%) and for groups (34.8%).

To find out what survey respondents primarily mean by the term, I next asked, “When you use the word ‘sapphic’, what is your MOST FREQUENT intended meaning?” This is where things get interesting! While as recently as a decade ago, “sapphic” was pretty much a direct synonym for “lesbian”, this definition was the least common choice at only 4.5%. A solid majority (60.8%) of respondents said they most frequently use “sapphic” as an inclusive umbrella term, encompassing either all women attracted to women, or also including nonbinary identities. The “synonym for lesbian” definition did show up as a more common choice in the next question (“Please indicate any additional meanings of ‘sapphic’ that you use less often”), but still less than half of respondents (42.6%) said they use it in this way.

When asked, “When you see or hear other people using the word ‘sapphic’, what do you interpret them to mean?”, almost three-quarters (74.1%) of respondents indicated that they see it used as an umbrella term for all women attracted to women. They interpret the nonbinary-inclusive definition less often (46.4%) — slightly less than the “synonym for lesbian” definition (52.7%).

Notably, almost a quarter of respondents (24.1%) indicated that they never use the word “sapphic”, and 8% said they never hear or see anyone using it. This suggests that even if it is somewhat back in style, it isn’t exactly universal, even within the queer community.

Stand Under Our Umbrella

When I compared demographic groups’ responses, there were clear contrasts in how different age groups and genders approach the two umbrella definitions. 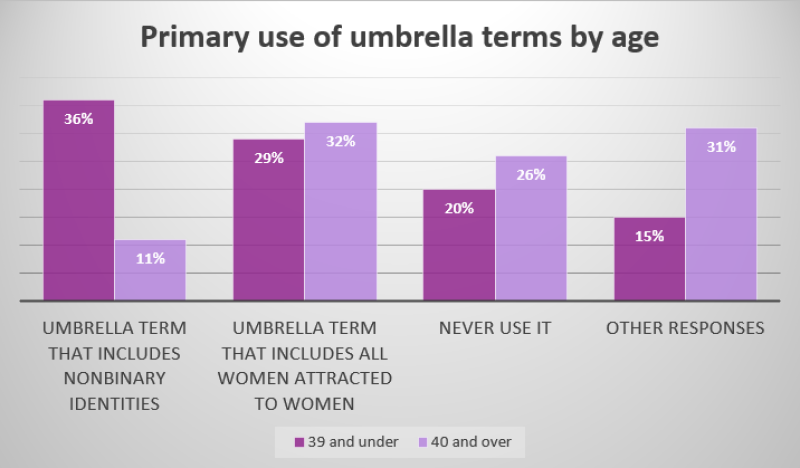 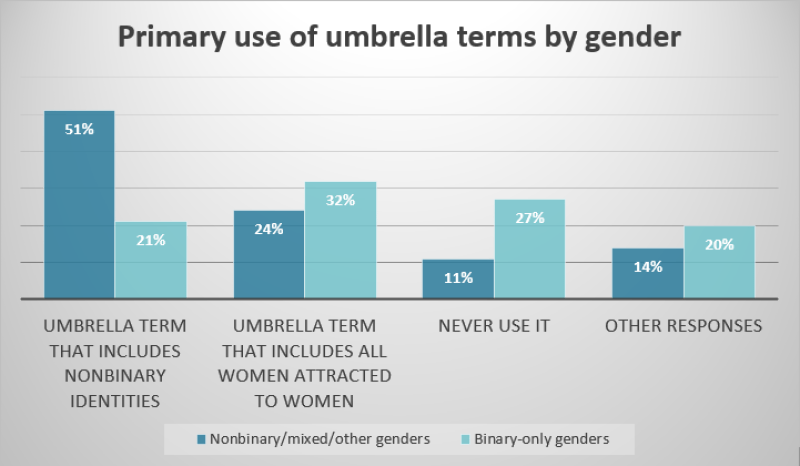 As a compelling side note, several people commented that they felt the word had various connotations or restricted uses (e.g. “memes,” “mostly used when typing,” “ironically or dramatically,” “playful,” “romantic,” “dreamy,” “derogatory, ‘soft’ and desexualized,” “archaic,” “tongue in cheek,” “cutesy”). Most, but not all, of the people who made these kinds of associations did not see it as a nonbinary-inclusive term.

TL;DR — Wherein I Finally Get To the Point

To sum up, it seems that there is indeed somewhat of a “sapphic” resurgence, at least amongst some groups of younger queer women and nonbinary people on the internet, who are using it mainly as an umbrella term.

There are other such words already out there, so why this one specifically — what language gap is it filling?

My hunch is that “sapphic” as an umbrella term has a couple of things going for it. First, it hits just the right balance of inclusive and exclusive, without resorting to constructions like “non-men” that centre on the excluded party. It positions an expansive concept — love and attraction amongst a profusion of diverse genders and sexualities — as the standard within our community, instead of as an outlier within the wider patriarchal society.

Second, it can potentially avoid some of the ambiguity of other labels. “Queer” is a broad and subversive umbrella term, but it can also refer to queer cis men. “Bisexual” and “pansexual” are often considered mutually exclusive with “lesbian”. Furthermore, while “lesbian” increasingly encompasses some nonbinary identities, it is still widely assumed to default to “women attracted to women” (and, unfortunately, its adoption by transphobes means that it doesn’t always clearly signal inclusion of trans women). In short, there is no other term or phrase that can transmit the concept of “all queer women, and some nonbinary people, who are attracted to other women and/or some nonbinary people” in such an efficient way as “sapphic” can.

Some of the comments on the survey add important perspectives to this conversation:

“I mostly come across it when used to describe relationships where one of the parts is bisexual in order not to invisibilize them by calling the relationship ‘lesbian’.”

“Sapphic” clearly isn’t yet free of all ambiguity itself — but as someone who gets a thrill out of learning how words evolve, I’m rather excited to see what happens to it over the next ten years. It’s not every day that you get to witness this particular kind of linguistic phenomenon occurring: an established, even antiquated word gaining new versatility in a different context.

On a personal note, I like the idea of “sapphic” as a nonbinary-friendly umbrella term; it fits my own nebulous identities well, so I’m rooting for that particular definition to continue its upward trajectory.