As you may know if you’ve been following the Don’t Ask Don’t Tell hearings (read our recap of Thursday’s hearings here), John McCain has gone insane like he needs an Intervention insane. I don’t even know what kind of Intervention but just to be safe I want the gay guy AND Candy Finnigan. I imagine his situation is similar to the feeding-tube girl.

But first — today, a story from Former U.S Marine Corps Sergeant Justin Elzie, the first-ever Marine to be investigated and discharged under the “Don’t Ask, Don’t Tell” policy. See when Elzie got discharged in 1993, he fought it and he won temporarily — he was able to serve openly for four years before getting discharged. 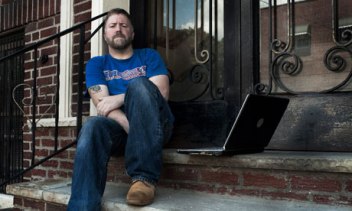 So basically what we have here is someone who has had the unique experience of serving as an openly gay man and he says he knows from personal experience that a repeal “will work.”

Elzie says he encountered a few problems at first, but once the press died down, “It became business as usual. I had a platoon of marines. I was a platoon sergeant. We went out in the field and fox holes, and really, after a while it just because sort of a non-issue.”

However, because Ezlie’s story is a Fox News article, they’d like to remind you of John McCain’s favorite statistic — “almost 60% of the combat Marine soldiers surveyed say: if there was an openly gay soldier in their immediate unit, it would affect them negatively to very negatively.” — and then introduces Marine Commandant Gen. Jim Amos, who testifies from absolutely no personal experience whatsoever that repealing DADT would be a giant disaster.

In closing, Elzie says: “I came out to make a difference and show folks that there are gays and lesbians serving openly in the military. I really wanted to get that message out and to change the conversation and improve the Marine Corps.”

John McCain is probs hunting for his very own Justin Elzie on the other side — a Joe the Plumber, if you will, of the DADT trial.

On Saturday, Senate Majority Leader Harry Reid compared John McCain to Lucy from Peanuts — as you may or may not know, Lucy always snags the football away from Charlie Brown just when he’s about to kick it. See, Exhibit A: 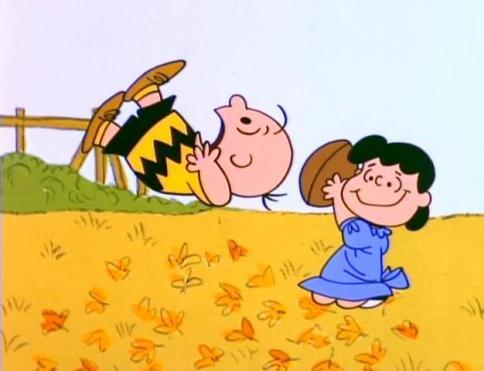 The video from Friday’s Don’t Ask Don’t Tell hearing (in 9 minutes) is below — basically what happens is a number of high-ranking military officials/advisors make a series of reasonable points regarding the impact of repealing Don’t Ask Don’t Tell on the troops and John McCain pulls everything that’s ever been stored in his ass out of his ass and lays it on the table in front of him for everyone to look at. Then he looks up and a tiny robotmonkey inside him asks questions culled at random from a prehistoric version of Cranium.

Notice that every time John McCain speaks, you feel like throwing up in your mouth:

In response to why the survey didn’t ask takers to say if the US “should” repeal DADT, Jeh Johnson, co-author of the report, says… because that’s not what they were asked to survey! And also, that’s the part for congress to decide.

Comparing McCain to Lucy from Peanuts was not all the smack Harry Reid talked on Saturday:

“First, Sen. McCain said he would seriously consider repealing it if the military leadership thought we should, and [when] the military leadership said it should be repealed, he pulled away the football. Then Sen. McCain said he would need to see a study from the Pentagon. When the Pentagon produced the study saying repeal would have no negative effect at all, he pulled away the football again.

And his latest trick, he said yesterday that he opposed repealing ‘don’t ask, don’t tell,’ a proposal that would be a great stride forward for both equality and military readiness … because of the economy. I repeat, the senior senator from Arizona said he couldn’t support repealing ‘don’t ask, don’t tell’ because of the economy. I have no idea what he’s talking about and no one else does either.” 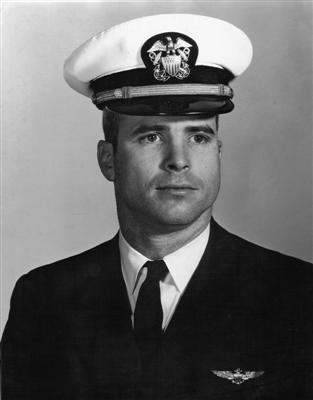 This is getting officially out of control, right? And once upon a time, as you may have heard, John McCain didn’t suck. But actually — he kinda did.

Did you read the 2008 Rolling Stone article Make-Believe Maverick? It offers the best insight to McCain’s deal than anything I’ve seen before or since:

“[The Real McCain] has consistently put his own advancement above all else, a man willing to say and do anything to achieve his ultimate ambition: to become commander in chief, ascending to the one position that would finally enable him to outrank his four-star father and grandfather…”

“…few politicians have so actively, or successfully, crafted their own myth of greatness.”

When precisely did McCain lose his way? According to Rolling Stone — he never really had it:

…many leading Republicans who once admired McCain see his recent contortions to appease the GOP base as the undoing of a maverick. “John McCain’s ambition overrode his basic character,” says Rita Hauser, who served on the President’s Foreign Intelligence Advisory Board from 2001 to 2004. But the truth of the matter is that ambition is John McCain’s basic character. Seen in the sweep of his seven-decade personal history, his pandering to the right is consistent with the only constant in his life: doing what’s best for himself. To put the matter squarely: John McCain is his own special interest.

Described as a hot-tempered, hard-drinking “lousy student” with a “darkly misogynistic streak,” McCain lived a “charmed existence” at boarding school due to “his grandfather’s name and his father’s forbearance.” He later graduated from Annapolis 894th in a class of 899. McCain’s pedigree enabled him to advance in the world without ever having to earn it. And he knew how to charm the grown-ups, given a chance.

Despite crashing two planes in training, McCain ended up in Vietnam after his Dad pulled strings to get him there — McCain wanted to be a war hero, see.

While abroad, McCain’s plane set off an explosion which set off a chain reaction of bombs which eventually created a “devastating inferno” that would kill 134 of the carrier’s 5,000-man crew and injure 161. He skipped out on dealing with the fire or its aftermath, preferring to hobnob with a visiting New York Times reporter who’d later become a part of his press “base.”

Later, McCain’s Mom had to pull strings to keep McCain in the Navy despite his excess demerits.

Also worth looking at is the truth about what happened in Hanoi. Eventually:

So where the fuck does he get off worrying about a few homogays?

Perhaps he lacks faith that the gay men would be able to keep it in their pants — after all, he used tours to cheat on his first wife Carol (he met Cindy while still married) and selected Rio for his sponsored trip abroad because he figured himself more likely to get “ass” there. Furthermore, McCain preferred the luxury of off-duty cross-country flights to seduce women — although adultery is a court-martial offense. There have also been rumors of McCain being romantically involved with subordinates.

So what we have here is a real stand-up guy, right?

From The Mystery of John McCain in The Atlantic:

I have been trying to think of a comparable senior public figure who, in the later stages of his or her career, narrowed rather than broadened his view of the world and his appeals to history’s judgment. I’m sure there are plenty (on two minutes’ reflection, I’ll start with Henry Ford and Charles Lindbergh), but the examples that immediately come to mind go the other way.

So, currently the GOP is attempting to push DADT into next year by requiring two weeks of debate on a survey that was supposed to more or less end the conversation:

Since 1990, the Senate has never spent anywhere close to four or five weeks debating that bill. Four times its taken longer than seven days — thus approaching or exceeding the two week threshold.

This would typically be the part of the story where John McCain, in lieu of actually winning this fight, would call his father and get him to come get John what he wanted. But since that can’t happen, McCain will probably skip to his second line of defense — courting the press and misrepresenting his own life and beliefs in order to appear like a “rebel” unafraid to speak up. The only problem?

The press isn’t listening to his bullsh*t like they used to. From The Tuscon Sentinel:

Among Republicans, perhaps no member is more of a sissy than John McCain. (He may have shown some stones 40 years ago, but not for a good long time.) McCain definitively proved his cowardice when he recruited Sarah Palin – at risk to the nation – in a rapacious attempt to salvage his failed presidential campaign. Further evidence arrived during his recent senatorial campaign, when he threw Arizona Hispanics (and Arizona’s largest trading partner) squarely under the campaign bus. It turns out “The Maverick” is really The Panderer.

Senator McCain engages in senseless and spineless logic, first hiding behind the troops and claiming he’d support repeal of DADT if they did… Discrimination adds nothing and costs something. Ending discrimination costs nothing and adds something. What’s the conundrum here, John? A squirmy McCain is simply trying to prop up the illusion that he is a brave man while fleeing in panic from a drill-field phalanx of relentless, creeping gayness.

Recent headlines regarding John McCain include:

Not a maverick among them.