C-Span’s livestream is no longer visible here.  But we watched it and now we are going to tell you what happened at the Big DADT Show Today. OpenLeft live blogged the hearings and you should go read the whole thing. I’ve included my notes and their live-blog below, but mostly their live blog because I slept through my alarm this morning. 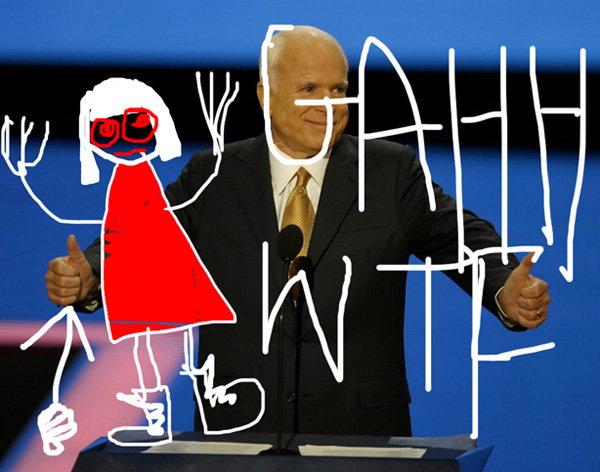 “This capable force of ours could repeal DADT if asked to… what I want to know is not can our Armed Forces repeal this law but whether they should. Unfortunately, that’s not the focus of this study… this is a question that must be answered by Congress with proper consideration of the issue… the DOD has had 10 months to complete this report. Together they contain over 1,000 pages of data and analysis. We received it 36 hours ago and are still carefully analyzing it. What I can saw now is that in addition to my concerns over what questions were not asked, I’m troubled by the fact that this report represents only 28% of the military force. I find that hard to view that as a fully representative sample set… what appears clear is that the survey and anecdotal data… do not lead to a firm conclusion.”

“As this debate continues, I hope people would put aside their political agendas.”

“What was my personal opinion is now my professional opinion. Unit cohesion will not suffer, families will not encourage their loved ones to leave the service. I don’t discount for a moment the results of the survey… whatever risk there is, it is thoroughly mitigated by the [recommendations] in this study. These are the things I know for a fact, these are the things the study tells us. Now let me tel you what I believe. Our troops are ready for this. Most are serving or have served alongside gays and lesbians.”

“Some may want separate shower facilities… some may even quit the service. We’ll deal with that. But history tells us most will put aside personal proclivities for themselves and for each other… there’s a common bond against threat of the enemy.” 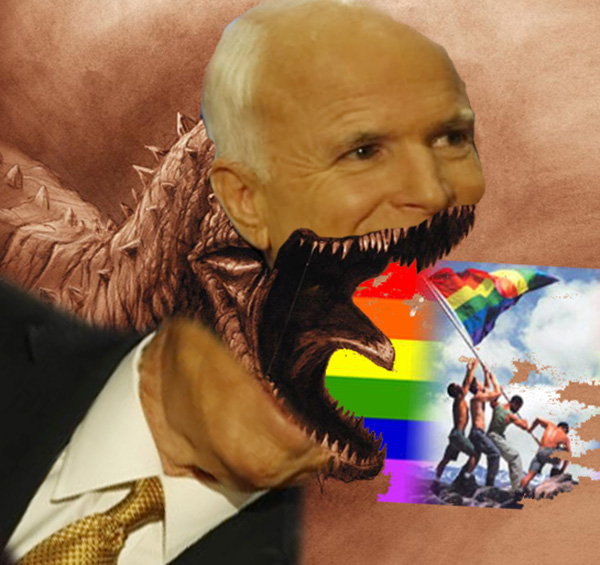 Gates: Yes, and our military allies had large numbers who said they would leave, and in the end, those numbers were far smaller than what surveys indicated. While there are concerns you’ll probably hear tomorrow about special ops forces where there are limited numbers of people, I don’t think any of us think the numbers would be anything like what the survey suggests, based on experience. Also, they can’t just up and leave. They have enlistment contracts. 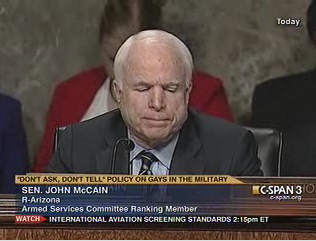 I believe this is when McCain shared this lovely tidbit, regarding our inalienable right to decide who we want to discriminate against:

John McCain wants to know if anyone has been held responsible for Wikileaks. Idk. This man is just a sack of bones and rotting brain at this point.

“This country was defined not by its borders, but by its values… we’re all endowed by G-d to these rights… to life, liberty and the pursuit of happiness…. in our time one of the transitions that is occurring that it’s just wrong and un-American to discriminate against people based on their sexual orientation.”

Sen. Levin responds to allegations that he’s just there to follow through on Obama’s campaign promise. He says he’s here because of a law passed in 1993 that needs to be changed and because there are gays and lesbians serving/dying for our country and we need to honor the service and patriotism. That’s why he’s here, not because of a campaign promise.

Only 15% of the GLBT soldiers said they’d actually want to be OUT if DADT was repealed, saying things like, “We’re in the military, that stuff isn’t supposed to be done during duty hours regardless of whether you’re gay or straight.” If DADT is repealed, the Military Code of Conduct will apply to gay and straight members so WHATS THE BIG DEAL?

“The American people have lost confidence in some of the great institutions of our society… probably the one central institution that Americans still have faith in is the military… it’s not who you are, but what you do. And I think DADT is a stain on the honor of the U.S. Military.”