I thought I was hallucinating when I followed a link this morning to the “Pride Month Champions of Change Video Challenge” on the whitehouse.gov website. The White House? Of America? Hosting a “contest” for LGBT Pride Month? This is a real thing?

Indeed it is. The contest is part of the White House’s “Champions of Change” series, which seeks to celebrate “everyday heroes who are demonstrating commitment to improving their own communities, their country, or the lives of their fellow citizens,” and in celebration of LGBT Pride Month (June), the White House Video Challenge invites y’all to highlight the champions of LGBT rights, a.k.a, “to explore the stories of unsung heroes and local leaders who are leading our march towards a more perfect union.”

Participants must produce a three-minute (or less) video in more or less any format — PSA, music video, video blog, interview — that fits into one or more of the following seven categories:

+ Storytelling  (stories of coming out or overcoming adversity)

+ The Arts (music, art, photography, poetry, and prose that inspire courage and acceptance)

+ Friends & Allies (family members, teachers, faith leaders, and other allies in the fight for equality)

They’re also accepting essays “no longer than 750 words” (that’s an epically short essay) for those unable to make videos, and all entries are due May 4th. In June everyone will vote on who’s the best and then the finalists will be “featured as Champions of Change at an event at the White House.” There appears to be no limit on how many of you can make videos about me, so it’s basically a free-for-all in that regard.

Needless to say, this is kinda awesome. Of course, like everybody, I’ve got a laundry list of complaints to register with President Obama regarding the unmet expectations and unwelcome surprises of the last four years — as an uninsured person prescribed now-under-attack medicinal marijuana for a chronic pain disorder and a small business owner who will be mailing the IRS my entire bank account while General Motors and Bank of America pay nothing, there’s a lot I think Obama could do for me and people like me that he’s not doing.

But as a queer person, I’m relatively pleased and surprisingly optimistic about our future with this administration.

Like many of you, I get lots of weirdo emails “from” Obama, Michele and Joe Biden, and recently I followed the link on one of Biden’s emails to donate to the Obama campaign. It asked me to “tell Obama” what issue was most important to me this election season, and although the economy is probably my honest #1, I picked “LGBT rights” in order to represent. My “thank you for donating” page was met with this: 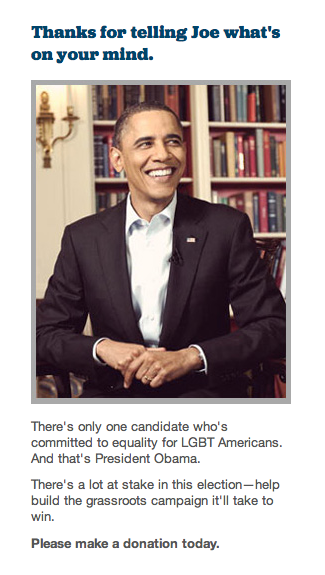 Mhm, that’s right — President Obama is committed to equality for LGBT Americans! I know there’s dissent over this allegation, but I admit I get slightly ragey when other queers argue that Obama’s gay rights initiatives are just transparent disingenuous efforts to snag the gay vote. (I also get ragey when journalists argue that Obama’s unlikely to support same-sex marriage because it will harm his chances with African-American voters — a concept that has been debunked at least a billion times over the last four years.) For starters, snagging votes is his job, he’s a politician! That’s like criticizing us for publishing posts catered towards our readers’ interests in order to maintain or improve website traffic — of course we want traffic. That’s our job. In addition to my subjective conviction that he’s just too smart to be against equality, we’ve all witnessed some pretty serious gains for LGBT rights over the last four years, from repealing Don’t Ask Don’t Tell to his refusal to support DOMA in court.

As Rachel wrote yesterday about the Obamas’ policy of inviting gay families to the annual White House Easter Egg Roll — the first administration to do so — these types of gestures are “a hallmark of how different the Obama administration is from the one before it. The fact that the administration considers it important to differentiate itself in this way is another hallmark — they actively want to be perceived as pro-equality, and be associated with same-sex families, not associated with the movement against them.”

And now he wants to get it on film. Check out the video challenge website for more details.

Riese has written 2773 articles for us.