This review will contain spoilers for The Boys Season 2, specifically for Bisexual Badass Queen Maeve’s storyline, because this is more of a recap than a review since I can’t truly with confidence give this show a blanket recommendation. (It caters to a specific taste.) Tread carefully.

I never thought that I would ever be able to call a show about superheroes “too real” but on Season 2 of The Boys, the corporatized, egotistical, overpowered, privileged, entitled, (and, you guessed it, white) “supes” wanting to make America great again hit a little too close to home in 2020.

The metaphors were heavy-handed, and sometimes they weren’t even metaphors at all (there were literal nazis involved, y’all) but it did very plainly highlight the dangers of people with those attitudes having public platforms.

But we’re not here to talk about Stormfront and Homelander, truly horrible people whose lines were basically quotes from current American leadership. We’re here to talk about Queen Maeve; the bisexual superhero whose sexuality was used as a weapon against her for most of the season, making the strongest woman in the world feel small and helpless.

Elena’s first gig this season is a stint in the hospital for appendicitis. Maeve sneaks away to visit her, which is sweet, but when it’s clear she still doesn’t feel like she can be in public with Elena, Elena gets frustrated and asks why she’s here if nothing has changed. 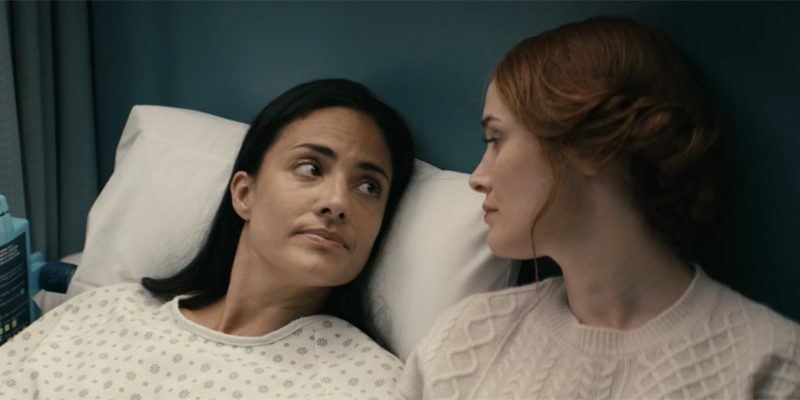 Maeve in plainclothes was a lot for my lil gay brain to handle.

She wants Maeve to leave, but Maeve finally confesses that the reason she doesn’t feel like she can be in public with Elena is because she’s afraid of Homelander. He’s jealous and violent and the last person he heard she was involved with ended up being permanently separated from his head.

Elena is shocked and doesn’t understand why she’s telling her this, after all this time. And Maeve says simply, sadly, “I don’t want you to hate me anymore.”

However, despite Maeve’s best efforts, Homelander still finds out about Elena and outs her to Maria Menounos on live television with Maeve sitting right next to him. He (incorrectly) says she’s a lesbian, and says her lesbian girlfriend is “Hispanic.” (For the record, the actress who plays Elena is Guyanese Canadian…and bisexual!) All in an attempt sidestep the question Maria Menounos presents to him about diversity on his superhero squad, and the hashtag #HeroesSoWhite. (See what I mean about the on-the-nose parallels?) It’s a cruel power play and Maeve has no choice but to put on a brave face. Off-air, he’s angry and mean and manipulative and Maeve feels powerless to defend herself.

The Vaught multi-media conglomerate being what it is, Maeve has no choice to play along as they decide to lean in and capitalize on her sexuality by making her into a gay Wonder Woman of sorts. Which seems all fine and good at first, but then of course they take it too far. They want Elena, who is on the femmier side, to dress in menswear and keeps calling Maeve a lesbian superhero. Elena pushes back on all this, saying she doesn’t want to change how she dresses and that actually Maeve is bisexual, but they say that the term lesbian is “an easier sell” because it’s “more cut and dry.” And about the wardrobe they say that if there are two women in a relationship they have to be male/female presenting to be palatable because “this isn’t Penthouse.” Honestly it’s one of the best industry self-owns I’ve ever seen from the industry. 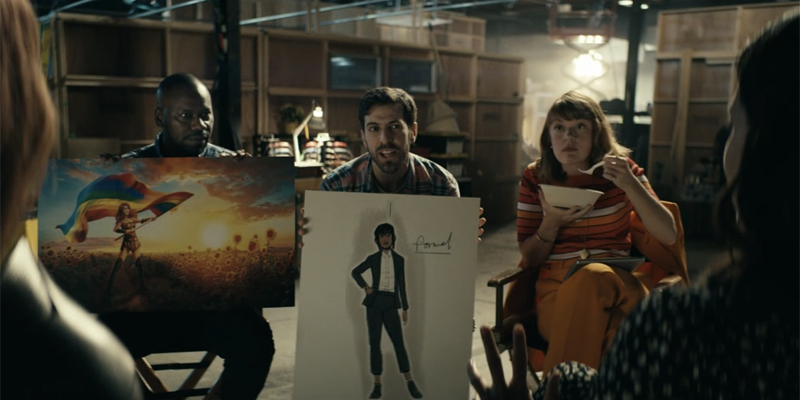 “No no, we JUST got the general public more or less okay with us saying the word lesbian on TV, we couldn’t possibly say BISEXUAL. It has the word sex in it! Too scandalous! Lesbians only! But not TOO lesbian. Just like, bland lesbian. Okay? Okay.”

Two men and a straight woman sitting here tell a bisexual woman and a lesbian how they “should” present themselves to be more “palatable” to the world. What’s sad is, I don’t even think this is an exaggeration. I feel like these exact sentences have been said behind the scenes in Hollywood, no need to punch up a line to get the point across. This shit is really happening.

Elena says she’s not for sale and looks over at Maeve, who is sulking but silent, and when she realizes her girlfriend isn’t going to stand up for them, or even herself, Elena storms off. Maeve follows her, hoping to smooth things over, but Elena doesn’t want to be dragged into all this. 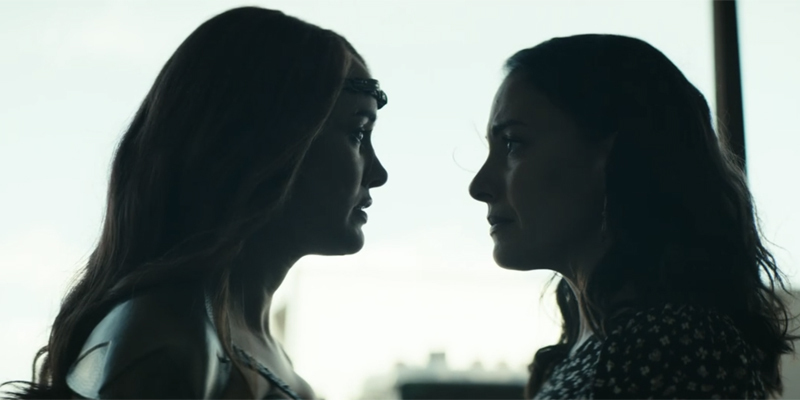 “I’m just a lesbian, standing in front of a bisexual, asking you to tell that marketing team to shove it.”

Maeve is afraid if Elena leaves, she won’t be able to protect her from Homelander. Elena asks what Maeve expects her to do, and all Maeve asks is that she trust her. “We’re going to take that motherfucker down.”

However, in her attempts to take him down, Maeve gets her hands on footage of her and Homelander abandoning the airplane full of people in Season 1, and while using her phone to order food, Elena stumbles across the incriminating video. And even though it’s very clear Maeve is trying to save at least one person, one little girl, and Homelander bullies her into leaving no survivors, Elena is shocked to her core about it. Until like a week ago, even she didn’t really know how bad things were behind the Vaught curtain, let alone that Homelander was actually evil, so this is just a lot to take in about her girlfriend.

She tries to sleep on it, tries to reckon with it, but ultimately can’t move past it, so she breaks up with Maeve and goes to stay with her sister for a while.

Maeve immediately tries to fuck away her feelings by jumping into bed with some boys, because as we mentioned, she is bisexual, but since this doesn’t fit the lesbian narrative her PR team is trying to build, her manager is very displeased by this turn of events. But Maeve tells her off.

Maeve, still good at her core, but feeling defeated, saves Starlight from Noir but won’t join her on her mission to take down Vaught. “It doesn’t matter what we do, nothing changes,” she says. “Nothing ever changes or gets better. I’m tired.” Which is a mood we’ve all heard or felt, especially these past four years, especially this year, but Starlight won’t be swayed by Maeve’s defeatist attitude, and neither should we.

Because even Maeve – dumped by her girlfriend, isolated by her abusive ex, feeling hopeless – ends up being inspired by Starlight’s determination. She shows up just in time to help Starlight and Kimiko kick the everliving shit out of the Nazi supervillain Stormfront while the boys watch in awe, which is a very satisfying moment. 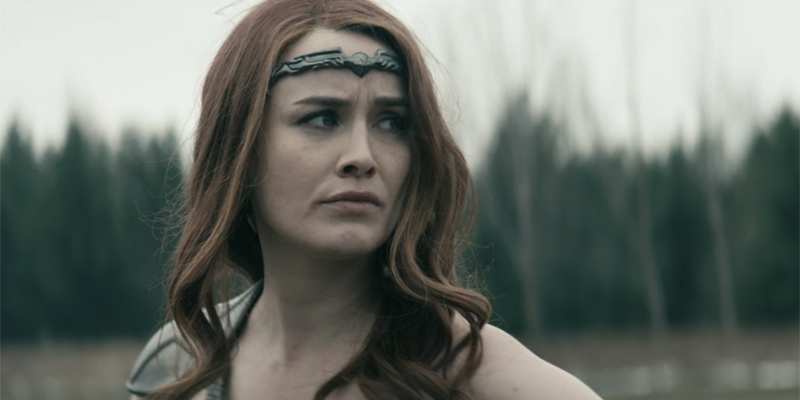 This whole show makes me want to shout GIVE WONDER WOMAN A GIRLFRIEND YOU COWARDS at DC.

Maeve uses the video to call off Homelander, saving Starlight and her friends in the process. She doesn’t care that the video incriminates her too, as long as it outs Homelander as the monster he is. As long as it keeps anyone from loving him.

And just like she knew it would, that statement is what gets Homelander to back down. He can’t risk not being adored by fans, he will do anything, cover up any wrongdoing, say any lie, if it means he gets to keep having rallies and hear people chant his name.

The rebels aren’t done trying to overturn Vaught though, and even though I have a Primrose Everdeen Problem with some of the events of the finale (aka a long-running goal made moot right before a supposed victory leaving me to shout WHAT WAS IT ALL FOR), there’s still plenty to do.

While a little scary to see our current state of affairs so perfectly paralleled in such a gratuitously violent show, it did do exactly that. Showed how easily a literal Nazi could fit into the harmful us vs them narrative, showed how quickly people can be convinced to turn on each other. How people wield power and manipulate society, how abusive people can seem charming to some and be absolute monsters to others. The gore and the extremism of this show isn’t for everyone, what with the exploding heads and all, but I’m so intrigued by this world where Supes live among us. The show was already renewed for a third season, plus a spin-off set in a superhero college is in the works, which sounds right up my alley, and set up season newcomer Claudia Doumit (aka one of the best parts of the show Timeless) for some fun stories in the future. And hopefully the show, that clearly knows the issues we face as a community re: representation, works to fix it from the inside while also calling it out. (More Maeve and Elena, is what I’m asking for.) I also hope it continues to be stories of fighting corruption from the inside out, and good lord I can’t wait for Homelander to have his comeuppance.

I’ll leave you with Starlights words, that put what Maeve learned over the course of this season succinctly, something I think everyone needs to hear as Election Day rapidly approaches, and what honestly should have been Rock the Vote’s slogan this year: “If you jump ship and let the assholes steer, you’re part of the problem.”