There was supposed to be a debate last night. Two candidates, on opposite ends of the stage, entertaining questions from a select group of “undecided voters” in a town hall format. It’s a format meant to humanize the politician… to allow them to develop a rapport with an average citizen or to show sympathy when the moment warrants it. Usually, it’s the highlight of the presidential debates. But, as it has throughout this year, COVID came along and upset everyone’s plans.

The Commission on Presidential Debates tried to salvage the debate, proposing that the second debate be held virtually, but Donald Trump’s campaign rejected that outright. With no compromise to be had among the parties — and with increasing controversy developing around the debate’s chosen moderator — the commission cancelled the second debate and set on preparations for the final debate on Oct. 22.

With an opening in his calendar, Biden immediately agreed to a 90-minute town hall with ABC News, moderated by George Stephanopoulos. The network hosted a similar town hall for the president in September. Then, in the eleventh hour, NBC News announced they’d be hosting a town hall with Trump — similar to one held for Biden a week ago — at the exact same time as the former vice president’s event on ABC.

So now, instead of one town hall, where audiences would get to hear from both candidates and where the candidates would get to critique each other live, voters had to choose between the dueling town halls. Or, you could just wait and let me watch them for you.

ABC: The Vice President and the People 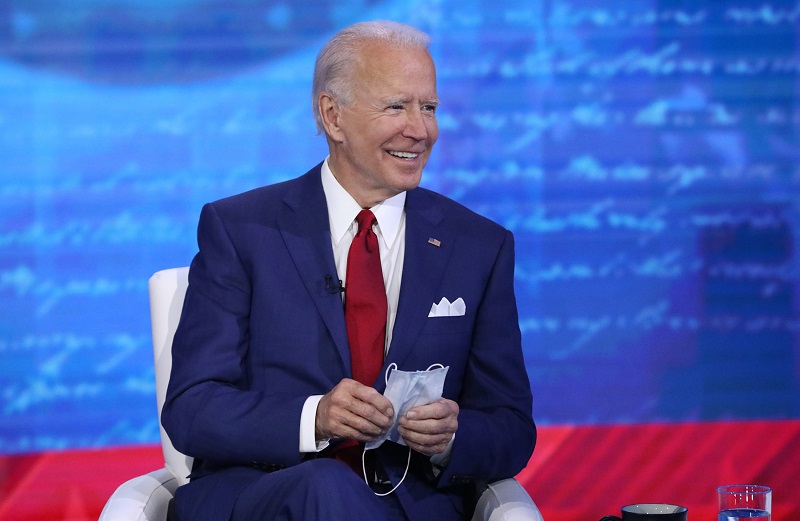 The town hall is a format in which Joe Biden should shine. The tragedies that have defined his life — the deaths of his wife and young daughter in an car accident, his younger son’s addiction and the loss of his elder son to cancer — have molded him into a fundamentally empathetic person and the town hall format really allows a candidate to showcase that ability. That said, the format is also less structured, with no firm time limits. Less disciplined candidates, which Biden certainly is, can tend to meander… and sometimes stumble into troubling statements.

To his credit, Biden didn’t stumble too much last night. If anything, his town hall felt like a microcosm of what his presidency might be like: good, but not great… boring at times… both grounded and constrained by his 40+ years of experience in Washington…and rooted in a fundamental decency that sometimes disappoints. A few moments in Biden’s town hall stood out: outside of two town halls, hosted by LGBT groups during the Democratic primary, LGBT issues have gone largely unremarked upon during the campaign. Considering the way our community and trans folks, in particular, have been harmed by the current administration, it’s a startling omission. But last night, with ordinary voters taking over the questioning, Joe Biden got two questions about issues impacting our community.

The first question, from Philadephia Democrat Nathan Osburn, spoke to an issue that’s at the forefront of the minds of a lot of LGBT folks lately: the Supreme Court. After taking comfort in the Supreme Court’s decision in Bostock — which formally extended discrimination protections to LGBT employees — our community has been dealt one blow after another. First, the death of equality champion, Ruth Bader Ginsburg. Then the nomination of her successor, Amy Coney Barrett, a judge with a record of support for anti-LGBT causes, followed by the statements from Justices Clarence Thomas and Samuel Alito blasting the Court’s decision in Obergerfell. Osburn’s question spoke to that fear.

Asked what he would say to LGBTQ Americans and others who are worried "about erosions of their rights," former VP Biden says "I think there's great reason to be concerned for the LGBTQ community, something I fought very hard for." https://t.co/JEyTOkB6qk #BidenTownHall pic.twitter.com/BnZ8XSOJSA

“What do you think about ideas from people like Pete Buttigieg and others to put in place safeguards that will help ensure more long-term balance and stability?” Osburn asked. “And what do you say to LGBTQ Americans and others who are very worried right now about erosions of their rights and our democracy as a whole?”

Biden was pressed by George Stephanopoulos on whether he’d support expanding the Supreme Court but was reluctant to take the bait. Instead, he wanted to keep the focus on the push by the White House and Senate Republicans to rush Barrett through the nomination process. If Republicans handle the nomination poorly — and given that yesterday’s Judiciary Committee vote was done in violation of Committee rules, that’s a pretty safe bet — Biden seems open to considering all options.

“It depends on how this turns out. Not how he wins, but how it’s handled,” Biden stressed. “I don’t know anybody who’s gone on the floor that’s been a controversial justice in terms of making fundamentally or altering the makeup of the court that’s gone through in a day kind of thing.”

Later in the town hall, Mieke Haeck, a mother of two daughters, one who is trans, from State College, asked the former vice president about how he’d undo some of the harm that the Trump administration has done to trans people. She asked, “How will you, as president, reverse this dangerous and discriminatory agenda and ensure that the lives and rights of LGBTQ people are protected under US law?”

Asked by a mother of a transgender child about what he will do to protect LGBTQ rights, former VP Biden says: "I will flat out just change the law." https://t.co/JEyTOkB6qk #BidenTownHall pic.twitter.com/fxg7AhKwHG

This time, Biden was both clear-eyed and comforting: “I will flat out just change the law. Eliminate those executive orders.”

As he wont to do, Biden rambled in response to the question moving almost nonsensically from one LGBT topic to the next, but I found some real heart in his answer. He spoke as clearly as I’ve ever heard him about trans identity being innate: he said no kid would choose to be transgender, knowing how difficult it’d make their lives. He noted the epidemic of violence against trans women of color (though, admittedly, he understated the numbers).

“There is no reason to suggest that there should be any right denied your daughter,” he told Haeck before pointing out that his son, Beau, had gotten protections based on gender identity and expression added to Delaware’s anti-discrimination laws. Biden noted that his son’s efforts were inspired by a trans woman who worked in his office while Attorney General. That woman was Sarah McBride, and next month she’ll likely become the highest-ranking elected trans person in the United States.

As president, @JoeBiden will change the lives of trans Americans by protecting our rights and upholding our dignity. He will center the experiences of trans women of color, repeal discriminatory Trump executive orders, and change the law. 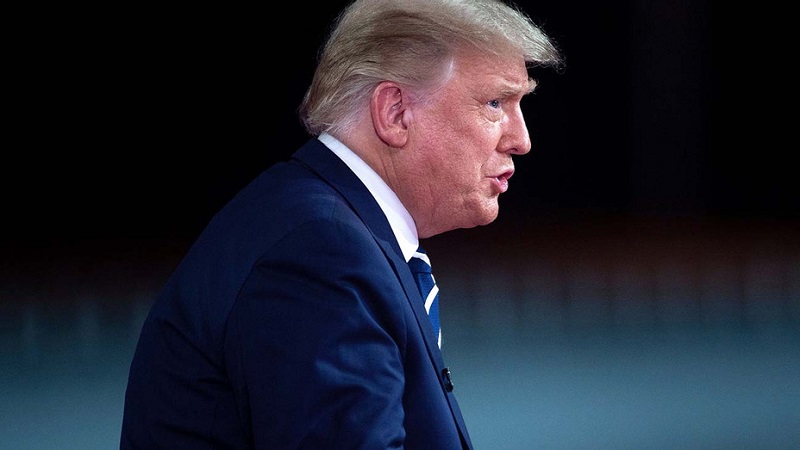 Donald Trump’s town hall was also a microcosm of his current and potential future presidency: evasive, unfocused, prone to embracing conspiracy theories and with a profound disdain for strong women. As with Biden’s NBC town hall last week, Trump’s started with a set of question from the forum’s moderator… in this case, Savannah Guthrie. Interviews with this president are especially difficult because: 1. he has an aversion to facts and 2. he responds in such a vituperative way that it’s just easier to concede the point. To her credit, Guthrie refused to back down.

She pushed him repeatedly to reveal when the last time he tested negative for COVID — prior to his positive test — a question the president could not answer with any certainty. She recoiled at the suggestion that the president had caught the coronavirus not from the trip to Cleveland with White House advisor, Hope Hicks, who tested positive or at the Rose Garden super-spreader event… but at an event with Gold Star families a day later. When he tried to take credit for saving 2 million people from dying from coronavirus, Guthrie challenged him. She also pushed him to denounce white supremacy and QAnon, a fringe conspiracy that’s gaining traction within the rightwing, including likely members of Congress.

Trump doesn’t mind town halls, in part because he feeds off the energy of the crowd. They’re not as engaging for him as his super-spreader political rallies, of course, but still, they give him that adrenaline fix that comes from appearing before a live studio audience. But, for the Trump campaign, the difficulty becomes directing that adrenaline in a way that benefits them politically. Despite being down double digits in the polls, Trump hardly used any of his town hall answers to offer any direct criticism of Joe Biden. He couldn’t pivot from questions about COVID, healthcare and pre-existing conditions, passing an emergency relief package or taxes to attacking Biden, even when his questioner left him an opening.

Instead, he was nonsensical about a host of issues: claiming there was a difference between DACA and Dreamers or claiming that he’s done more for African-Americans than any president since Abraham Lincoln or claiming that a COVID vaccine is just around the corner. He never accepted fault for anything, including his own tax returns; instead, blaming his flaws on Nancy Pelosi, the IRS, on Senate Democrats being mean to Brett Kavanaugh or the Obama administration.

It was, in short, a microcosm of his presidency. If you’ve been paying attention for the last four years, you didn’t miss a thing.

The third second and final presidential debate will be held on Thursday, Oct. 22 at 9PM from Nashville, TN. It will be moderated by NBC News’ White House correspondent, Kristen Welker.