I just spent 10 minutes copying and pasting my favorite parts from this article about urban cyclists before I gave up because I was copying the entire article. It’s no secret that car-drivers and bike-riders don’t always get along. There always seems to be a few aggressive drivers who feel it’s necessary to shout expletives at every car, human, and animal smaller than their 3 ton vehicles with fake testicles hanging off their bumper who make all of us look like technologically-advanced cavemen. And there’s also irresponsible cyclists who are convinced that they have some kind of environmental moral imperative to act like a d-bag, and who ruin it for the rest of us. 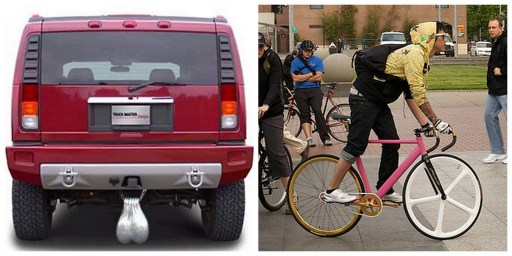 Will Doig lays out exactly what cyclists are and aren’t doing. Things we do right: advertising, devotion, and diversity, apparently. Doig says studies show that “ridership is remarkably equal across income groups” and that the theory that bicyclists tend to gentrify neighborhoods is “more perception than reality.” Unfortunately we’ve got a reputation for being, in the words of a commenter at the San Fransisco Chronicle, “cocky, self-righteous riders… [who] believe that [we] are untouchable.” Pile on a little Tea Party-esque fear–encouraging cycling “threatens our personal freedoms!”–and you can see why we’ve got a long way to go.

P.S. If anyone’s looking for a good name for a female biker gang, feel free to use my fingers’ favorite typo (that’s what she said?) while writing this article: “Cyclits.”