Four chemistry students are creating nail polish that changes colors when exposed to drugs often used in sexual assaults such as GHB, Xanax and Rohypnol. The idea behind Undercover Colors, they say, is to create an easy to use product to combat drug-facilitated sexual assault against women.

It sounds so logical, so simple. Their intentions seem good — they say they thought of the project because they all know someone who has been sexually assaulted. They’ve received heaps of praise (Buzzfeed called the product “lifesaving”) plus a $100,000 grant from an investor and $11,250 from the Entrepreneurship Initiative at their university, North Carolina State.

As a science fair project, it’s impressive. But it falls short as a meaningful tool to protect women from rape.

The four men behind Undercover Colors.

Depending on which statistics you look at, 18 to 25% of women experience sexual assault in their lifetimes. That number goes up for college-aged women. But in a survey of 5,466 undergraduate women, only 2.3 percent believed or were sure they had been given drugs without their consent before they were assaulted. So, the number of women whose rape or assault might be prevented by such technology is quite small compared to the overall number of women who are attacked.

That percentage breaks down even further when you consider other factors, like that the vast majority of women who are sexually assaulted know their attacker. Women are unlikely to go around sticking their fingers into every drink they receive from a cousin, a partner or a friend — nor should we expect that succumbing to that level of paranoia is a reasonable expectation of women if they don’t want to be sexually assaulted. This technology also wouldn’t help most masculine of center women, most men, or people like me who pick their nail polish off within 24 hours of putting it on.

Katrina Stephens is a 24-year-old sexual assault and domestic violence advocate in Seattle Washington (she’s also a lifelong friend of mine). A few years ago, her friend sexually assaulted her after putting GHB in her cup of water.

“It never even crossed my mind that there could have been an issue,” Stephens said. “If I had happened to be wearing the nail polish, it wouldn’t have prevented anything.”

Let’s play out the scenario for the one in millions chance that someone in the presence of someone who wants to assault her is wearing the nail polish, coyly gets her finger into the drink, and spots the color change. Then what? How does it end? If this person is willing to go to such lengths to harm her, they won’t be phased by her setting her drink down. So let’s say she gets away or finds help. Does she call the police to report the activity of her fingernails? What happens when the next person this predator wants to harm opts for her favorite OPI shade that weekend?

How does it end?

It doesn’t; not with nail polish, anyway. Instead, this nail polish created by four young men who have daughters, girlfriends and friends to think about (so they say on their Facebook page) is another in a long line of products designed to help women prevent their own rapes. Last year, uncuttable, magical locking shorts were all over social media. There are cups and straws that are also designed to change colors to detect drugs. There’s Rape Axe, an insertable spiked contraption that locks onto a penis upon insertion that will supposedly speed attacker identification when he has to go to the hospital to get it removed — let’s note that for this tool to be effective the attacker must complete the rape first. There are whistles and pepper spray, both of which I’ve carried because they make me feel a modicum of security. 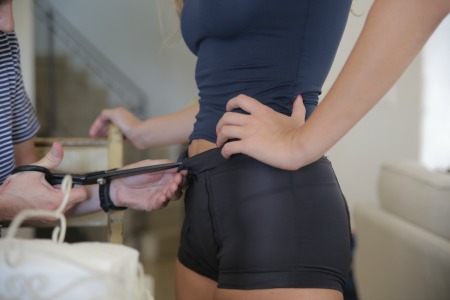 AR Wear, a special pant designed to prevent sexual assault, was all over the news last year.

There is a line between sensible precaution and allowing fear to control my life. It doesn’t feel safe or empowering to imagine a scenario where I’m getting flawless on Friday night and deciding “I better paint on an extra coat, bring it, ya bastards.” If even one woman evades sexual assault because she put on this nail polish, then I will give these dudes a virtual high five, and I certainly don’t blame any woman who uses it or otherwise goes to great lengths to protect herself from risk. But this product does nothing to dismantle a culture of violence against women that demands we constantly become ever more vigilant against those who would do us harm. Undercover Colors, like so many other products, treats rape as an individual incident rather than a systemic and pervasive problem. Despite the never ending stream of prevention products, the statistics haven’t improved.

Instead, the products perpetuate victim blaming by making it easier for others to turn to the victims of assault and ask “Well [product] exists; why didn’t you use it to prevent this from happening?” On their Facebook page, the creators say they “hope to make potential perpetrators afraid to spike a woman’s drink because there’s now a risk that they can get caught.” What about making potential perpetrators afraid to rape a woman because when she tells someone about it, they’ll believe her and seek justice? What about creating cultural shifts so that people don’t become violent assailants at all? Date rape drugs are just a tool, and if would-be rapists find it to be a less effective one, they’ll find another. The issue isn’t date rape drugs; the issue is rape culture.

As Know Your IX founder Alexandra Brodsky said to Think Progress, “One of the reason we get so excited about these really simple fixes is because it makes us feel like the problem itself is really simple. That’s a comforting idea. But I really wish that people were funneling all of this ingenuity and funding and interest into new ways to stop people from perpetrating violence, as opposed to trying to personally avoid it so that the predator in the bar rapes someone else.”

If comments on the group’s Facebook page are any indication, donations to aid in the development of this project are rolling in. Meanwhile, in a 2013 survey of rape crisis centers across the U.S., 75% reported a drop in funding, and more than half reported staffing reductions to conserve costs. Stephens, who has worked at four sexual assault and domestic violence shelters and for the National Dating Abuse Helpline, says there are never enough resources for the programs to be as effective as their communities need. And even organizations with highly successful prevention curriculums were unable to prioritize those, she said.

“They are so focused on doing the best they can with what they’ve got,” she said. “They’ve got to be able to help people now, and they can’t begin to think about longterm solutions.”

I don’t want to begrudge these young men their creativity and success — except that prevention and crisis programs are facing local, state and federal funding cuts and a drop in donations while money for their drug-detection paint rolls in. Local, education-centric programs are our best hope for seriously reducing incidents of sexual and other forms of violence. At Vassar college, three students created a bystander intervention program called We Are Here that aims to be intersectional and complicate understandings of what violence looks like. Shivani Dave, one of the creators, said one of the goals is for students to understand all the ways violence can be perpetrated, from the use of slurs and stereotypes to murder, rape and assault, so they can intervene when they see violence and avoid committing violence themselves.

The curriculum is highly specific to Vassar’s campus but can hopefully be adapted to any community, she said. She and co-writers Emma Redden and Sofie Cardinal got some funding from Vassar for the project and hope that with more work it can make a difference on campus and perhaps beyond. But, Dave added, “When you do this work you have to find ways to stop thinking about violence. If I am checking my nail polish every time someone brings me a drink, that’s not making me feel safe. That’s telling me to be a better woman and not get raped.”

via Men Can Stop Rape

I am thankful that more men are becoming allies to sexual assault victims and potential victims. Some efforts, like educational and advocacy program Men Can Stop Rape, focus on deconstructing tropes around masculinity and empowering men to identify and speak out against violence. In contrast, Undercover Colors ignores so many realities — the limited number of rapes that involve date rape drugs, the even smaller number of women who might be in a position to test for such drugs, and the very large number of women who are raped by someone they would never suspect of harming them. What if they had combined their chemistry powers to develop a more efficient and effective rape kit or to create awareness around misogyny and violence against women in the sciences? Instead, we have another product that reminds women we are in constant danger and should do everything in our power to mitigate threats. But hey, at least we can look pretty while we do it.