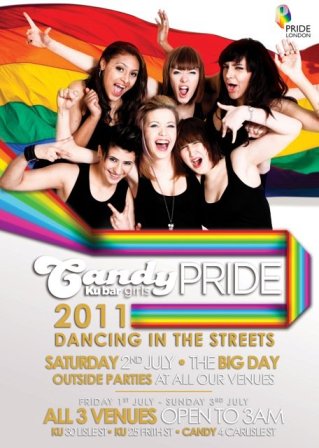 The show will premiere July 7th.

The description from the Channel 5 website is as follows (please note the usage of “lifestyle choices” in the last paragraph — isn’t that special?):

“The Candy Bar…offers viewers a unique insight into the previously unseen side of Soho. These are real lives, real loves, real people. In this six part series, the drama starts to unfold as we join the cast in their race against time getting the Candy Bar ready for its re-launch after a recent refurbishment.

Viewers will be drawn into a world filled with raunchy drama and unique characters. The series aims to explore the day-to-day experiences of the girls as they look for the ideal date, find the perfect flat-mate and deal with relationship break ups.

The series will also explore the girls’ relationships with their families and find out how their parents and those closest to them feel about their lifestyle choices. We follow the Candy Bar girls on their journey as they look for the answers, all set against the backdrop of a giant and vibrant city”.

This familiar idea will likely be just as awesome for the lesbian community as the U.S.’s reality shows about drunk lesbians, Gimme Sugar and The Real L Word! Also, much like those shows, the programme is being pitched to the media as a “serious sociological inquiry” which will not “herald a racier direction for the channel.”

“It’s not about being salacious: it’s about our mission to reflect Britain and maybe people who haven’t been reflected, perhaps ever. This is a section of Britain that has never really been under the microscope. The Candy Bar, like us, is having a relaunch and this series will examine how the people associated with it live their lives. They are also like us in that they are trying to build up a business.”

However, The Candy Bar Girls‘ new sexually suggestive advertising campaign seems to fall in line with the network’s promise that “viewers will be drawn into a world filled with raunchy drama and unique characters” rather than with the “sociological inquiry” Ford describes.

these girls are going to be on the show

Consequentially, Channel 5 is under investigation from TV watchdog Ofcom, which actually makes me want to watch the show even more.

According to Ofcom, TEN ENTIRE PEOPLE have complained about the Candy Bar Girls adverts placed on daytime television. Ofcom will be “investigating whether the ads breached the broadcasting code in respect to rules around appropriate scheduling and offence.” The ads are described like so:

Each of the on-air promos for the new reality show feature teasing close-up images that appear to be of two women engaged in sexual activity, intercut with lines such as ‘Red… hot… lesbians’ and ‘Pussy… loving… ladies’.

Wider shots then reveal the women to be engaged in more innocent activities, such as a gym workout and a woman stroking a toy cat in another’s lap, with the voiceover stating, “Well, what were you expecting?”, before a plug for Candy Bar Girls.

In addition to these TV spots, the girls at The Most Cake have photographed “tube ads”: 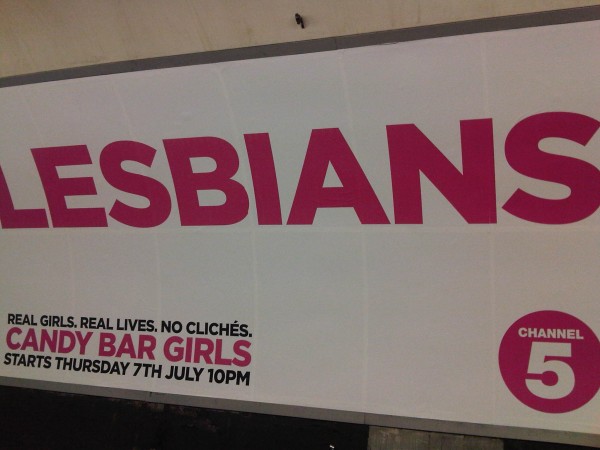 The cast will include Big Brother alum Shabby Katchadourian and a bunch of other hot lesbians and will open with the Candy Bar’s re-opening under the new ownership of a dude named Gary, who owns a bunch of gay bars in London.

The first episode promises such sociological inquiries as:

“DJ Sandra holds a photoshoot to find the face of the newly revamped bar, but the casting descends into drunken chaos.”

“Danni becomes nervous at the idea of dancing in front of a crowd, so she decides to practice in the club during its refit, drawing the attention of a crowd of builders in the process.”

“… the success [Danni] finds at the venue puts a strain on the relationship with her long-term girlfriend. Will the couple be able to weather this stormy period of their romance?”

I suppose it was inevitable someone would decide to make a reality tv show about lesbians. After all Lindsay Lohan made it sort of sexy back in 2008, that BBC one got a second series commissioned, and the whole lesbian sex thing sure looked pretty hot in that film about ballet.

I suppose it was also inevitable that it would make 80% of us pound our fists into our eyes, heave deep sighs and moan about how this will take representation of lesbians back about two decades and make everyone think we are either strippers or DJs. Reality TV hasn’t been very kind to either fat people or gypsies, so the fear is that it’s not going to make us come across very well.

Will you be watching?