I learned I was Jewish from film and TV.

Not literally. I went to a Jewish preschool, I was Bar Mitzvahed, I attended small gatherings for major holidays, and even, sometimes, went to synagogue. But growing up in a suburb that was at least a fourth Jewish, nothing about my lowkey family traditions stood out.

It wasn’t until I saw my family reflected on-screen that I realized our specificities. From the Coen Brothers to Joey Soloway, from Broad City to Crazy Ex-Girlfriend, I discovered how many characteristics of my upbringing were connected to our oft-forgotten religion. But this cultural Judaism is far different from the cultural Judaism of people who are Orthodox. While we may read the same Torah, our ways of life vary drastically. Let’s put it this way — the only thing I recognized from Disobedience was the desire to have a girl named Rachel spit in my mouth.

Jewish filmmaker Gabriel Bier Gislason’s accomplished new horror film Attachment misses the opportunity to explore this divide. For all its achievements — of which there are many — this tale of Jewish folklore falters in its focus on a goy.

Our romance begins when Maja (Josephine Park), the goy in question, meets curly-haired Leah (Ellie Kendrick) at a library in Denmark. Maja is a struggling actress there to read to children as her one successful TV role — a Christmas elf. Leah is an academic from London there for a short trip — to study Jewish art. A mix-up, some banter, and a slow-burn date, and Maja and Leah are on their way to fulfilling one of lesbianism’s most common stereotypes. 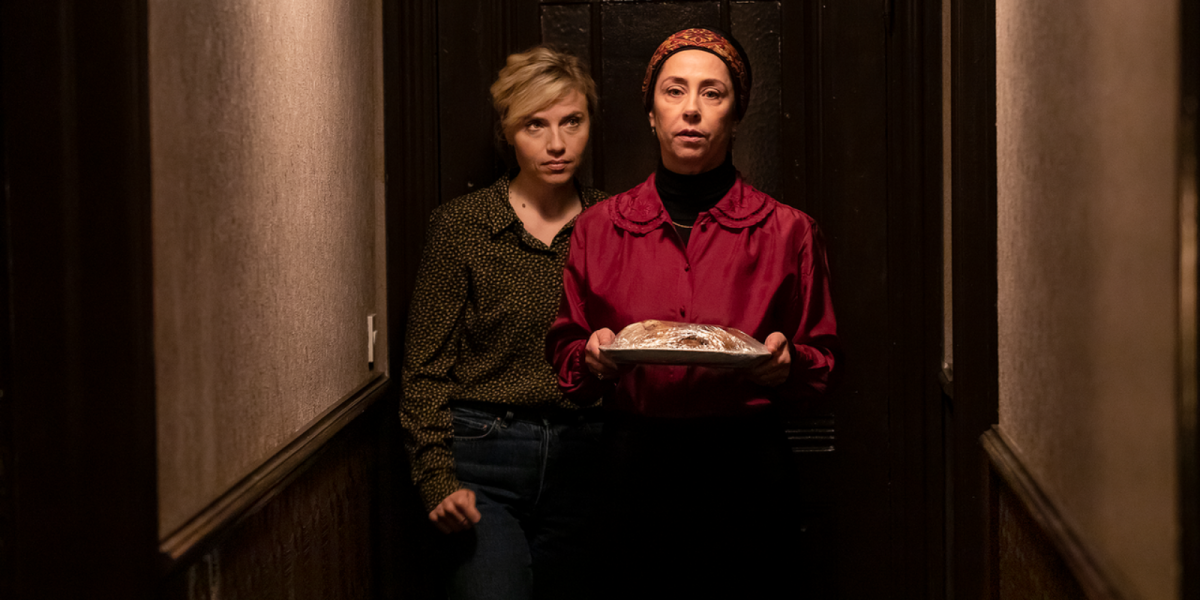 Maja lives alone in an apartment that belonged to her recently deceased mom. Back in London, Leah still lives with her Orthodox mom — same building, different flats. These two bond over their shared mommy issues and their shared interest in each other’s bodies. When it’s time for Leah to leave, she misses her flight like she’s been missing her mom’s phone calls. She wants to stay with Maja. Maja wants her to stay too.

But some things are even scarier than leaving your Jewish mother on proverbial read. Leah’s ominous sleepwalking turns into a seizure that’s more like a possession. Maja’s attempt to help leads to a broken leg and soon enough Leah is headed back to her mother in London — new girlfriend Maja by her side.

Much of the film’s tension is found in the simmering conflict between Maja and Leah’s mother (Sofie Gråbøl). Leah acknowledges her mom is troubled — but Maja suspects the danger is far more serious than that. She befriends Leah’s uncle (David Dencik) who owns a bookstore and he starts to teach her of the dangers hidden within Jewish folklore, dangers it seems Leah’s mother understands.

Every horror movie needs an other — a source of disturbance that interrupts the characters’ normal. The best horror finds this other in the real terrors of our world, be it those who hold power or the ways we betray ourselves. The cheapest horror finds scares in social difference — think the plethora of horror movies with trans killers.

The horror of Attachment is found in Jewish folklore. But it’s also found in the specific relationships Jewish children have with their mothers. By having a protagonist who is a Christian famous for playing one of Santa’s elves, the other of this movie becomes Jewishness itself. This wouldn’t be the case if she was simply non-Orthodox and disconnected from folklore.

As Maja learns more about the culture she’s entered, the film avoids falling into stereotypes or villainizing Judaism itself. My frustrations with the film are not about antisemitism — they are about missed opportunity. Every thematic thread of this film — motherhood, codependence, misguided love — would be stronger if the film focused entirely on Jewish characters. This becomes especially true as the plot reaches its convoluted conclusion.

While it may be imperfect, this is a movie that understands the horror of brushing your curls until they’re ripped out of your skull. Add in some hot lesbian sex and a frightening mother and that’s enough for this Jewish reviewer.

Drew Burnett has written 313 articles for us.