All photos courtesy of NBC/Universal

Melissa King came thiiiis close to winning Top Chef season 12. After a couple of episodes where her dishes landed her in the bottom three at the Judges Panel, she powered her way to back-to-back Elimination Challenge wins and secured her spot in the Top Chef finals in Mexico. This week, her winning streak ended when the judges were forced to choose between four perfect dishes. But she won the hearts of hungry viewers as she was winning the hearts of judges Tom Colicchio, Padma Lakshmi, Richard Blais and Gail Simmons. She’s already hosting wildly successful events with other contestants from her class on Top Chef, and she’s hoping her own restaurant is on the way soon. 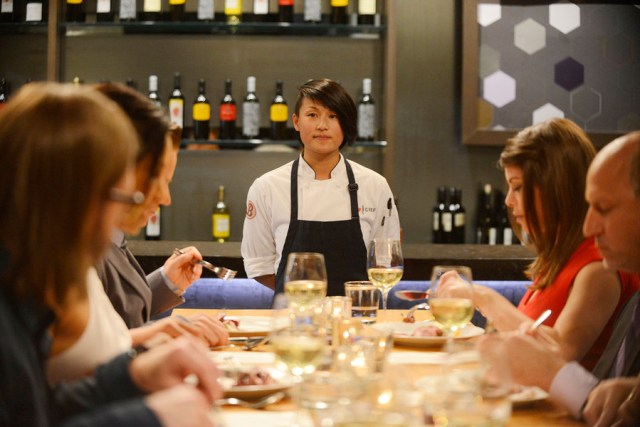 Melissa serves the judges seared duck breast in “The Final Battle of Beantown.”

You made this my favorite season of Top Chef ever. My girlfriend and I have been cheering for you like it’s the Super Bowl.

Let’s just get the hard stuff out of the way first, and then we’ll do the fun stuff. You made it to the finals in Mexico but lost the Elimination Challenge this week — but not because of anything you did wrong. Will you talk me through that?

It was a really emotional one. I think all of us are just such strong competitors, and everybody wanted to win, and to be in that position where you go home for a dish but there’s nothing really wrong with it — you know, at the end of the day, I was really proud to go out with my head held high. It’s better than going out the opposite way! It’s always a little frustrating when you think back about what you would have changed. I’m just not sure there was much I could have done differently. I think I did my best portraying the artist’s work in my dish. I was really happy with it.

So much of reality TV is about the editing, but I feel like you can just see your growth as a chef and as a competitor this season.

I feel like every week I grew into a stronger chef, and a stronger person. I felt that development. You’re getting feedback throughout the whole competition, and I really learned to take what the judges were telling me and try to make myself better because of it. There were times when I was on the bottom, and that always gets to you, but I did the best I could to take the criticism to heart but also to stay positive.

Everyone always says Top Chef changes them. Do you feel like that’s true for you?

When you’re on Top Chef, you’re putting yourself in a position to have so many challenges thrown at you. I used to question whether I could even hang on the show, if it was something I even wanted to try out for, but it was such a rewarding experience. I feel like I learned just how far I can push myself. I feel like after going through the very tough situations they put you through on Top Chef, I can really do anything. After you make it out alive, you’re like, “Huh. It really wasn’t that bad!”

Was there a particular judge you felt intimidated cooking for?

Tom Colicchio, all the way. All of us were really scared of him! For me, it was a matter of not wanting to let him down. He’s such an amazing chef and restaurateur. He notices every detail of your technique, and for me, technique is something I feel very strongly about. Letting down Tom Colicchio is like letting down your dad. 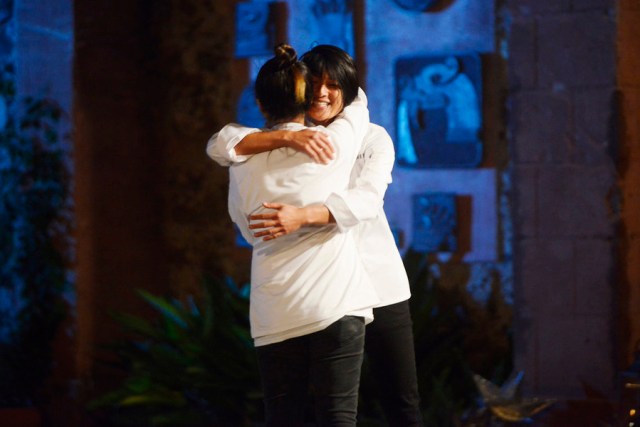 Melissa and Mei Lin hug after Melissa is eliminated in “Getting Prickly in Mexico.”

He did seem genuinely bummed out this week when he announced your dish in the Elimination Challenge.

Yeah, that’s really hard. I mean, at that point, everyone was basically making flawless dishes. I don’t think he wanted to see anyone go. We’re all friends at the end of the day. It was hard to be up against Mei Lin; she’s a good friend of mine. If you watch, you’ll see that we’re both crying.

It seemed like you guys, especially toward the end, had a genuine affection for each other. Have you stayed in touch since the show?

Oh, absolutely. The majority of the cast, we’re on a WhatsApp together, so we’re talking every day. It’s pretty great what’s turned out because of the show. We’ve all become family.

Did you get to see the whole show before it aired, or have you been watching it every week?

We didn’t see anything before it started airing, so we’re watching it every week with everyone else.

When you’re watching, are you feeling like the show really captures who you are? Every recapper on the internet agrees that you’re the nicest reality show competitor in history.

[Laughs sweetly and shly] Really? Well, thank you. Seriously, thank you. I feel like it was a fair representation of who I am. There’s a lot of footage to be edited down into a 45-minute episode, so there’s always going to be creative editing, but I think it’s really accurate to our experiences. 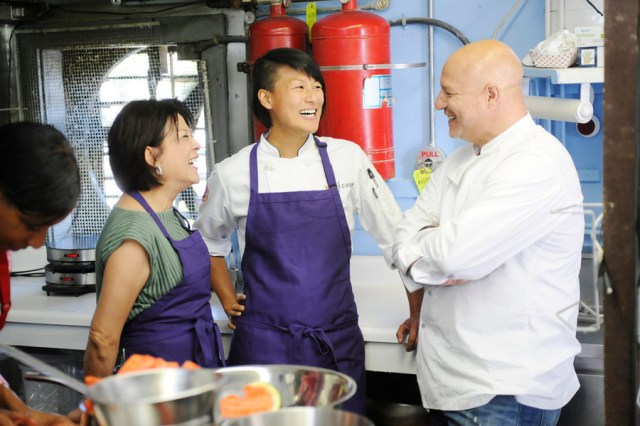 Melissa and her mom chat with Tom during “Sous Your Daddy!”

Did your mom like seeing herself on TV? She was awesome. She should have her own show.

I keep hearing that! She’s incredible. She’s my biggest supporter and to have her there was amazing.

I kept hearing this rumor that they were going to bring people’s partners onto the show. If they’d brought your girlfriend, would she have done okay?

I was going to ask if you do all the cooking at home, but you guys cook together?

You talked a lot on the show about doing Top Chef as a way to reach out to your dad. Did that turn out the way you hoped?

Since the show, my dad has done a complete 180. He’s been so supportive. He has watched every episode and shared his feelings along the way. I really do thank him for being the motivation to go on the show. That was what really pushed me to say yes. I wanted to do it for myself. It wasn’t about winning or competing; it was about pushing myself and trying to show my family that I could do it. 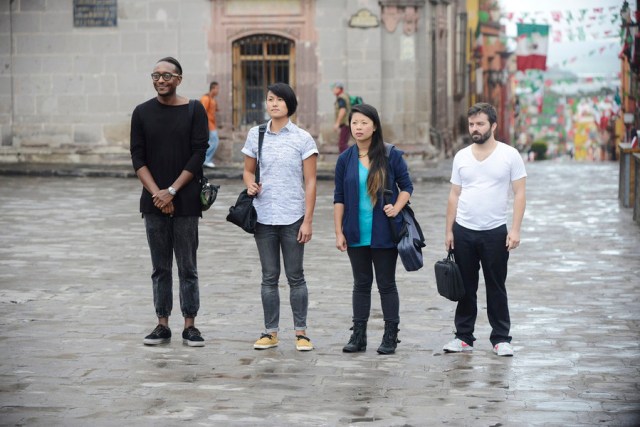 Would you do a reality cooking competition on TV again?

I would definitely do it again. It was such a fun experience.

I have just a couple of cooking questions because I’ve never talked to a superstar chef before and I’m trying to learn how to be an amazing cook. What are three tools every person needs in their home kitchen?

Oh! Okay, the first thing is a Vitamix blender. That thing pulverizes everything and makes the smoothest soups and sauces. I couldn’t live without it. Also, a mandolin, which is basically a Japanese slicer that shaves vegetables really thin. I’m a knife-cut person, so that’s really important to me, a really sharp knife.

That reminds me. The judges were obsessed with your vegetables. They talked about them like they’d never eaten a tomato before.

That was really interesting, the way they kept pointing that out. I take a lot of pride in that. Farmers put so much effort into growing those vegetables, and I think it’s really important, as a chef, to honor that work and highlight those vegetables, especially at the peak of the season. I love that they talked about that on the show.

What are three things everyone should know how to cook?

It’s important to properly learn how to stew and braise protein. There are lots of inexpensive cuts of meat that you can teach yourself how to stew and braise, and you’ll save a lot of money. And they’re great because they’re homey and comforting dishes; they’re classics. Whether it’s a pot roast or a curry, you can bring so much flavor to those dishes.

The third thing is fish cookery, which is hard for some folks, but if you can learn how to pan-sear a fish properly, you’ll be set. Just five minutes on one side and get it nice and crispy, and then literally just 30 seconds on the other side of the fish, you’ll have a beautiful meal.

I’m taking frantic notes, even though I am recording this interview. Okay, finally, what’s the key to making perfect scrambled eggs?

You’ve got to have a really hot pan and really hot oil to start with. Make sure it’s kind of smoking, and then drizzle in the eggs slowly but whisk while you’re drizzling. My girlfriend is always like, “How do you make these eggs so fluffy?” So I’ve taught her my secrets.

Well, now the internet’s lesbians all know your secrets! What’s next for you?

I’ve been doing a lot of traveling and doing some collaborative pop-up dinners with other Top Chef contestants, and I’m also hosting my own in San Francisco. It’s called Co+Lab, and I’m trying to incorporate different artisan products from the city, and we’re going to showcase them in each course. My guest chef who is coming in on March 9th is Mei Lin!

We did one together about a month ago called Flavors of Winter, and it was such a success that I was like, “You know what? We’ve got to do another one.” So she’s coming back for a reunion. I’m hoping each month I’ll showcase a different chef. I’m doing these pop-ups throughout the city and just letting people get to know me and my food, so that hopefully it will turn into a future opportunity for a restaurant.

That sounds really fun. I wish you all the best luck, Melissa. You seem like a genuinely warm and wonderful human being.

Thank you so much, and thank you and your girlfriend for cheering for me!