Does it feel like spring where you are? I hope so, because it finally feels like spring here in New England and I’m very excited about it. I work from home, and tend to turn into a bit of a recluse over the colder months, but I am feeling much more interested in being social now that things are warming up. Having people over is the best way to be social, in my opinion, because you get to hang out with friends and/or family but you don’t actually have to leave your house! It’s a win-win.

Whether you’re hosting a dinner party, having some friends over to watch a movie, or “hanging out” with your crush, being able to dim the lights is a great way to help set the mood. (Sidebar: do people still say “hanging out?” I’ve been with my wife for a over a decade now, so please advise.) DIY electric work can seem really complicated and overwhelming, but I’m here to tell you that it’s not as scary as it looks. I have now installed two dimmer switches in my apartment and lived to tell the tale. Ready? Let’s go.

1. TURN OFF THE ELECTRICITY. If you only remember one thing, I hope this is it: please don’t get electrocuted. To turn off the electricity, first you have to find your fuse box. Usually it’s in the basement for a single family home and in a hallway if you live in an apartment. Once you find it, open it up and figure out which fuse controls the power for the room you’re working on. If the fuses aren’t labeled, you can just guess and switch fuses off and on until the right light goes off. Which is what I did. 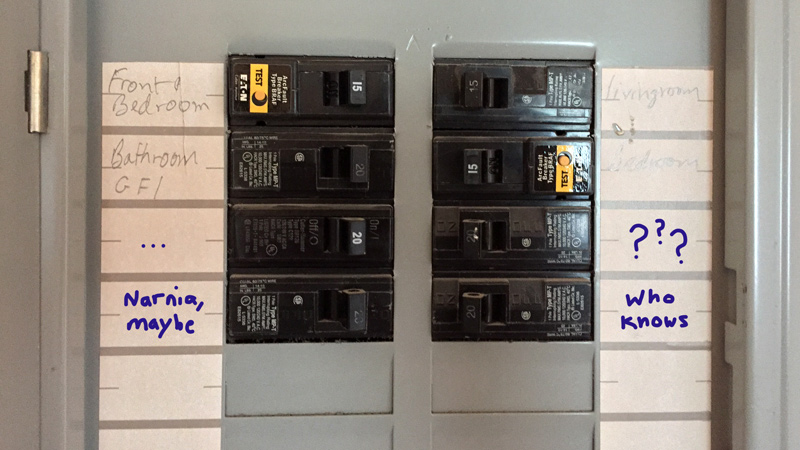 My landlord labeled half the fuses, because that makes perfect sense.

2. Take off the front plate and unscrew the switch from the wall. If your home is old, like mine, this part can be a real pain in the ass. I had to chip away a little plaster with my screwdriver and use some elbow grease to unscrew my switch. You can do it, though. I believe in you. 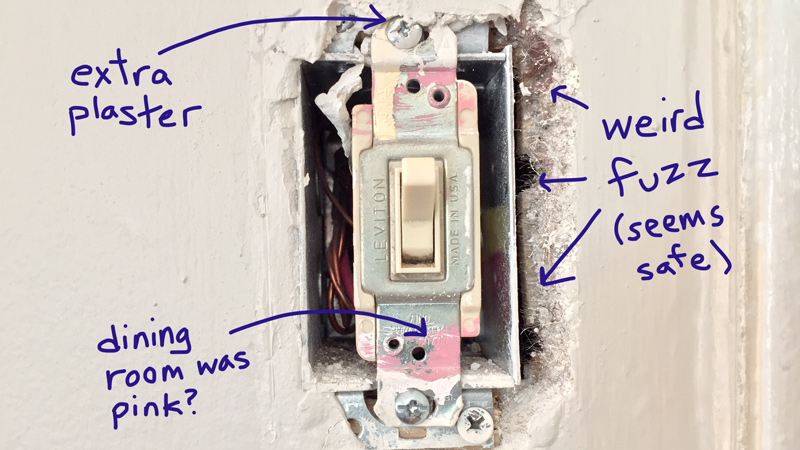 You never know what you’re gonna find in an old house.

3. Pull the switch out and look at the wires. Don’t be afraid to give the switch a good tug if the wires are bent or stiff. You don’t want to rip the switch out of the wall, but you definitely want to be able to see all the wires. The number of wires you have is going to depend on the type of circuit. A single-pole circuit (just a regular light switch) will have three wires, while a 3-way circuit has one extra wire. A 3-way switch is when you have two switches that operate the same light (2 switches 1 light, if you will) and before you ask, yes — that is the official and real name of the circuit, and yes — it makes me laugh every time I see it.

Everyone’s wiring is going to look a little bit different, but there are a few important consistencies: 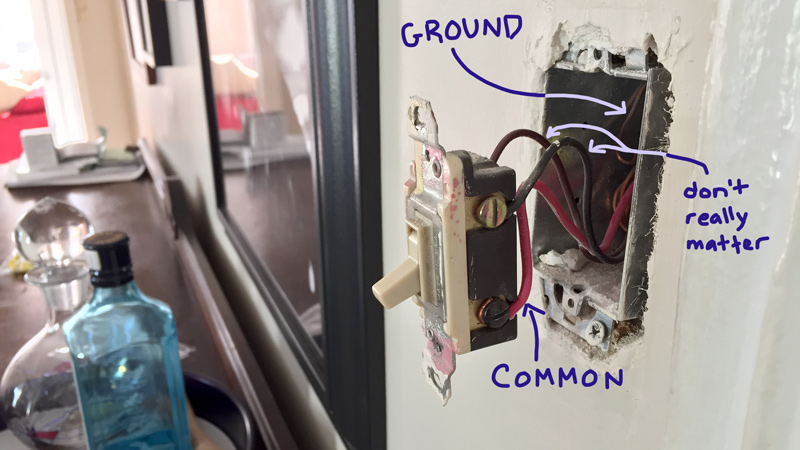 My ground wire wasn’t attached to the switch by a screw, which is why it looks like it’s hiding in the wall.

4. Disconnect wires from the old switch. Just go ahead and loosen the screws on the switch until the wires are loose. The wires will probably be hooked around the screws, so you just need to unhook them and they should come off easily.

5. Take a look at your new switch. Depending on the type of switch you bought, there will either be screws along the sides or there will be wires sticking out. If you have the former, you’ll make the new connections by hooking your wires on and simply tightening the screws. If you have the latter, which is what I had, you will have to twist and connect the two sets of wires and then screw caps on (which should be provided). More on that later. 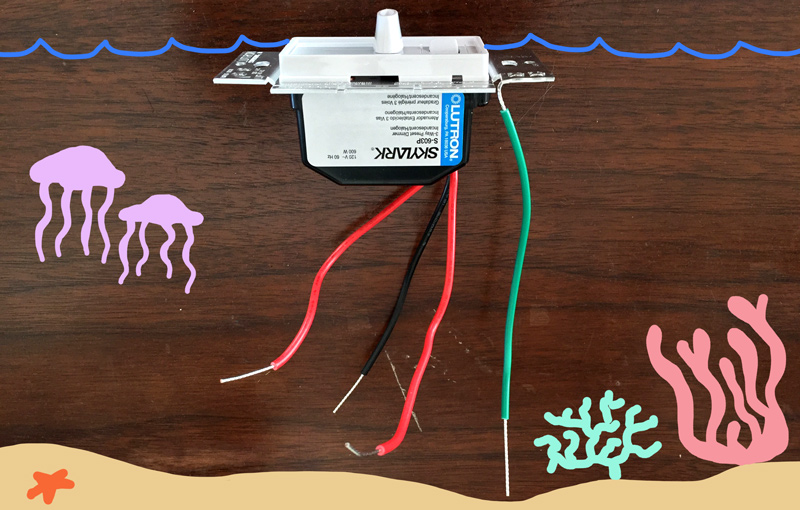 This new switch happens to look just like what I imagine a cool ocean exploration machine would look like.

6. Make your new connections. Check your packaging for this one — it should be very clear about where the wires need to go. Connect the ground wire first, and the common wire second. The extra one (single-pole circuit) or two (3-way circuit) wires will fill in the open gap(s). If you are connecting wires, you just need to twist them together — pliers can be helpful here if the wire is stiff. If your wire isn’t exposed enough to connect, you can use wire-cutters (which are often built into pliers) to gently cut through the insulation. 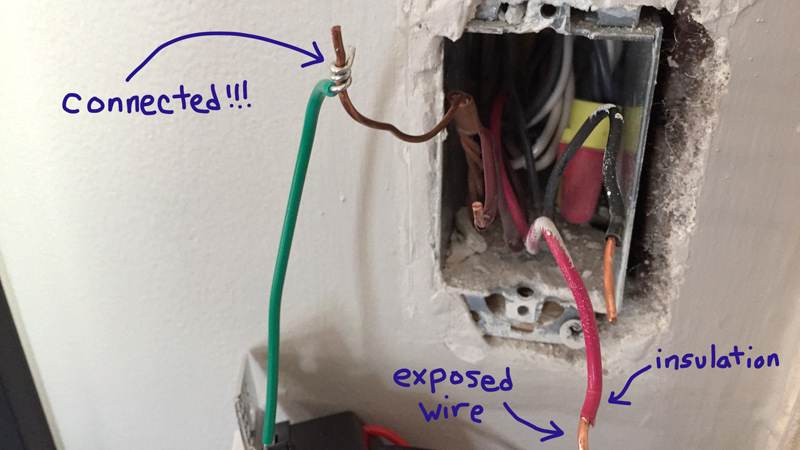 Ground wire connected and ready to be capped. 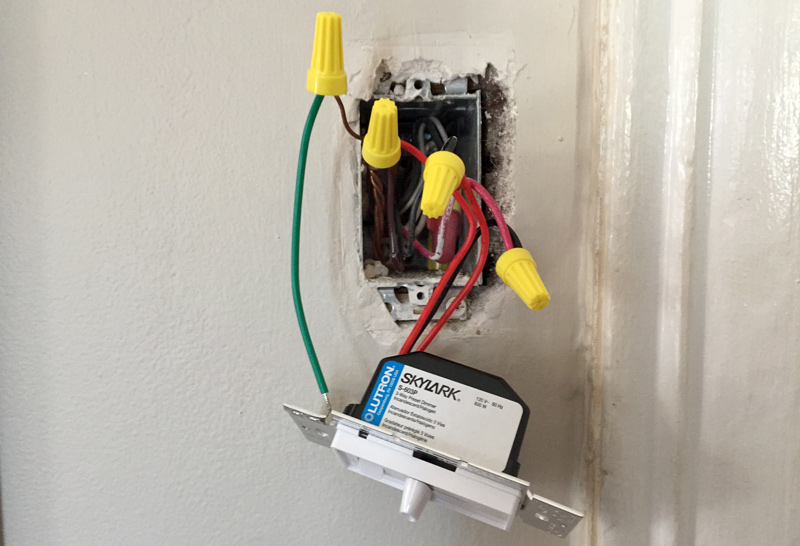 7. Stuff all those wires back into the wall and screw in the new switch and plate. This part can be kind of tough if your wires are long. Honestly, I just kind of crammed them in as best I could and pushed the switch into the opening until I could get the screws started. The wire connections should be quite strong, so you don’t have to worry about dislodging them.

8. Turn the electricity back on and test out your new dimmer switch! Hey, you did it! (Hopefully!) And next time you have people over, be sure to casually work your dimmer switch installation into conversation to properly impress friends and loved ones. “Oh, here, let me just turn down the lights,” you’ll say, like it’s no big deal, “It’s a 3-way circuit, by the way, you know how those go — extra wires to deal with. Good thing I’m a professional.” 10/10 will probably maybe amaze and astonish.