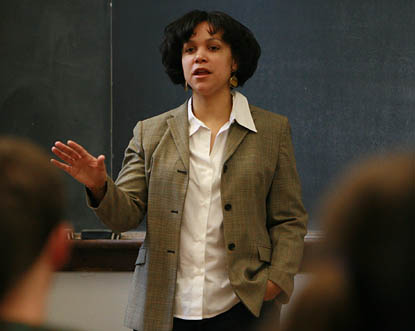 I first encountered Melissa Harris-Perry on the eve of the 2008 presidential nominations. At that time, one thing was certain: The Democratic candidate for president would be a Black man or a White woman; a minority in political system which has been reppin’ the old White guys since 1789. Because this was such a huge deal, political pundits and balloters alike immediately began raising unprecedented questions about race and gender: Which candidate could do the most people the most justice?

The legendary second waver Gloria Steinem believed that the answer was Clinton, whom she endorsed in a New York Times op-ed:

Black men were given the vote a half-century before women of any race were allowed to mark a ballot, and generally have ascended to positions of power, from the military to the boardroom, before any women (with the possible exception of obedient family members in the latter).

I caught myself raising a finger when I initially read that, as if the words on the screen had ears and would listen to my disputations of, “Um, that’s not entirely true. All Blacks were still susceptible to voter discrimination, from KKK threats to Jim Crow laws.  Hence the fucking Voting Rights Act of 1965, Gloria. And don’t even get me started on this ongoing voter ID shit.”

I didn’t have to argue with my computer monitor for much longer. Harris-Perry–then Harris-Lacewell–appeared on Democracy Now! alongside Steinem, where she articulated my feelings with much more eloquence and much less profanity:

What’s she’s trying to do there is to make a claim towards bringing in Black women into a coalition around questions of gender, and asking us to ignore the ways that race and gender intersect…I think that ignores an entire history of White women that have in fact been in the White House. They’ve been there as an attachment to White male patriarchal power. It’s the same way that Hillary Clinton is now making a claim towards experience. It’s not her experience. It’s her experience married to, connected to, climbing up on male patriarchy. These are exactly the ways in which this system actually silences questions of gender that are more complicated than simply putting White women in positions of power, and then claiming that women’s issues are cared for.

I was 19 during the last election. I didn’t know it at the time, but I’d learned my first lesson in intersectional feminism from this previously-unknown scholar. A Duke University alumna, Harris-Perry doesn’t just work at the intersections in her acclaimed texts; she is the intersection. Raised in Virginia by a formerly Mormon White mother and a Black father employed in academia, her life is as layered as the points she’s so damned good at making.

Take for example, her even-handed critique of the straining relations between Black and LGBT organizations:

I want the NAACP to come out clearly on the civil rights issue of marriage equality but I would also like to see where are HRC and GLAAD when we are marching for Trayvon Martin and — I mean, like I want us to be allies, but I need the allies to be on both sides.

Currently a professor at Tulane University in NOLA, Harris-Perry has made regular appearances on The Rachel Maddow Show, and even landed her own eponymous weekend program on MSNBC this year.

If you are unable to view episodes of The Melissa Harris-Perry Show where you are, I recommend her Facing Race lecture from Princeton University. If you’re not the “Oooh, sitting through a hour-long academic lecture totally turns me on” kind of queer like I am, let me promise you that this one is well-worth it. Harris-Perry is the queen of hilarious Powerpoints and pop culture references.

Harris-Perrys’ most defining career moment occurred several weeks ago when she tore new ones for several anti-welfare advocates during a roundtable discussion about  Martin Gliens’ book, Why Americans Hate Welfare:

What in the world is riskier than being a poor person in America? I live in a neighborhood where people are shot on my street corner. I live in a neighborhood where people have to figure out how to get their kid into school because maybe it will be a good school and maybe it won’t. I’m sick of the idea that being wealthy is risky. No, there’s a huge safety net, that whenever you fail, we’ll catch you, and catch you, and catch you. Being poor is what is risky. We have to create a safety net for poor people and when we won’t because they happen to look different from us, it is the pervasive ugliness. We cannot do that.

The moment has been turned into a .gifset with over 22,000 hearts, which is the approximate amount of hearts that instantly appear in my eyes whenever Harris-Perry comes on my teevee screen. She just…gets it; it being everything from modern Southern racism to African-American stereotypes perpetuated in the media. In an election season not too unlike the one when she first came on my radar, “getting it” could not be more important.