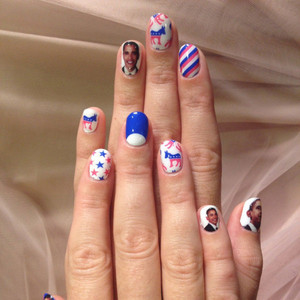 Politics and The New Normal America (October 2004), by Joan Didion for The New York Review Of Books – Joan Didion on “the apparently intractable enthusiasm of American reporters for covering political conventions,” John Kerry The Candidate, media spin, how Americans frame their ideologies, hypocrisy, polling, focus groups and all this other stuff. It’s Joan Didion so it’s really fantastic, obviously.

The Politics of Personality Destruction (June 2007), by Jennifer Senior for New York Magazine – In addition to bringing me back to a time in American history when John McCain wasn’t the enemy, Mitt Romney wasn’t the front-runner and Hilary was still slightly favored over Barack — this is a really entertaining and interesting look at how fucked up and crazy and fake the whole campaigning thing is, and the psychological toll it takes on its less affable participants.

The GOP War on Voting (August 2011), by Ari Berman for Rolling Stone – “As the nation gears up for the 2012 presidential election, Republican officials have launched an unprecedented, centrally coordinated campaign to suppress the elements of the Democratic vote that elected Barack Obama in 2008.”

The Big Lie: “I Love My Gay Friends, But I’m Voting Romney Anyway” (October 2012), by Christopher Hennesy for The Huffington Post – You’ve likely seen this one already or already posted it to your Facebook, but you know. Just in case.

The Week In Greed #18: They Were Carless People (November 2012), by Steve Almond for The Rumpus – “It is hard to overstate the degree of cynicism at play here: If you can’t win based on your policies, lie about them. If that doesn’t work, make sure those who support your opponent can’t vote. Confuse them. Inconvenience them. Scare them.”

Greed and Debt: The True Story of Mitt Romney and Bain Capital (September 2012), by: Matt Taibbi for Rolling Stone – “How the GOP presidential candidate and his private equity firm staged an epic wealth grab, destroyed jobs – and stuck others with the bill”

Red State, Blue State (November 2012), by Ira Glass & Friends for This American Life- You can’t actually read this one, you have to listen to it, duh! “Everyone knows that politics is now so divided in our country that not only do the 2 sides disagree on the solutions to the country’s problems, they don’t even agree on what the problems are. It’s 2 versions of the world in collision. This week we hear from people who’ve seen this infect their personal lives. They’ve lost friends. They’ve become estranged from family members. A special pre-election episode of our show.”

Rock, Paper, Scissors (October 2008), by Jill Lepore for The New Yorker – The strange and wacky history of voting in America, which began with literally voting out loud, evolved into “paper voting” with bring-your-own ballots (during a time when voters were often wounded or sometimes even killed on their way to the polls) and eventually became the super-special system we’ve got today.

The Ballot Cops (October 2012), by Mariah Blake for The Atlantic – “Thirty years ago, the Republican National Committee was accused of violating the Voting Rights Act and ordered to cease its “ballot security” efforts. Now an organization called True the Vote wants to pick up where the RNC left off, by building a nationwide army to root out voter fraud—or, some would say, to suppress voter turnout.”

George W.’s Personal Jesus (February 2005), by Guy Lawson for GQ – I still remember reading this piece for the first time. It was a revelation/terrifying. “He uses his religion as a political tool better than any president in history. Christ is his number one adviser. And yet we don’t really know what he believes. It’s all part of the plan.”

The Percentages: A Biography of Class (October 2011) by Sady Doyle for Tiger Beatdown – This essay has really stuck with me for its insight on the class tensions between low-income whites and the “liberal elites” they don’t want to vote for. It was in a previous edition of TIRTL.  – “you called us hicks, you made costumes out of us, you made jokes out of us, you have a bar in your big fancy city and it’s called “Trailer”: of course we want to hear that the “coastal elite” is worthless, of course we want to hear that we’re better than you, that we’re “real.”

I could go on forever, but I think this is good for now! Also if you’re looking for a solid endorsement of Barack Obama, The New Yorker’s got a good one.